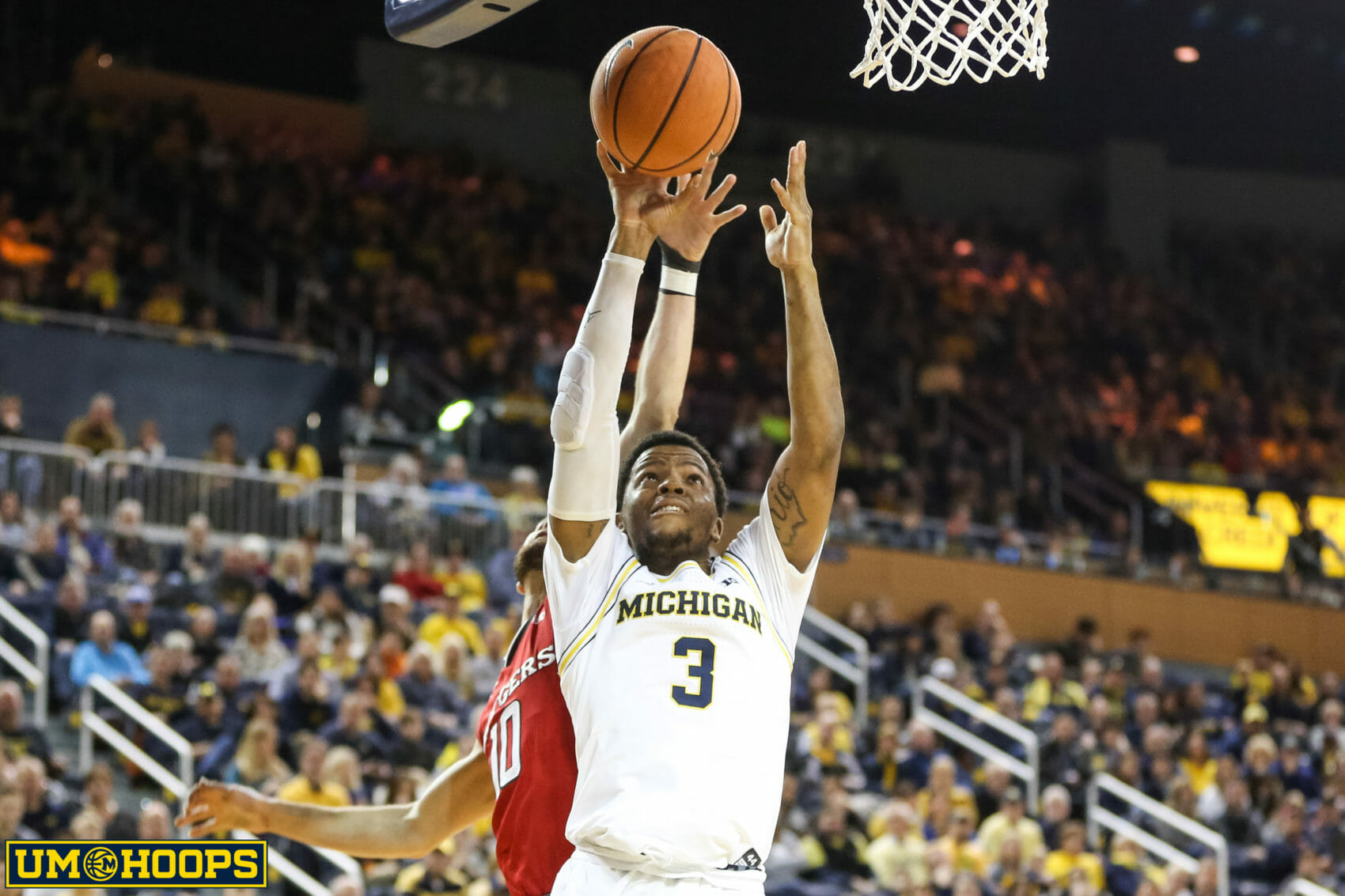 Just over two weeks after losing a heartbreaker at home to the Boilermakers, Michigan came to Mackey Arena and dropped another close one, 92-88. Here are five takeaways.

Abdur-Rahkman has his ups and downs, and more of the latter over the last few weeks. But Thursday was the best he’s played all year, bar none.

Early in the second half, he carried Michigan’s offense in a way he’s never done. It wasn’t just that he was hitting shots — 26 points on 10-of-15 shooting and 6-of-9 from outside — it was the shots he was hitting.

During one stretch in the second half, Abdur-Rahkman hit three pull-up 3-pointers in six minutes, including one from way outside. He followed that up with a fallaway corner 3-pointer off a Charles Matthews drive-and-kick. If we’re setting aside context, that might have been the single most impressive play from Michigan basketball this year.

“I just got a couple easy shots: a layup and a wide open 3,” Abdur-Rahkman said. “I got going early and just played confident.”

Even in the late stages with the game nearly out of reach, Abdur-Rahkman was nearly unstoppable. With about 30 seconds to go in the game and the Wolverines down by six, he nailed a triple with a hand in his face. Michigan was unable to get closer than three, but that was a tough play in a hostile environment late in the game.

If Abdur-Rahkman — a 36.5 percent 3-point shooter on the season — can play this kind of game with regularity, Michigan’s offense will start to hum at its default setting. Obviously that doesn’t mean shooting 66 percent from 3 for the rest the season, but consistent scoring from the off-guard position will be key to a more consistent offense down the stretch.

“To have Muhammad-Ali play that way is the expectation we have of seniors,” said John Beilein. “That’s the trend I hope we’re gonna see the rest of this season. Little bit about the time that Derrick Walton took off was about this time last year. ”

Zavier Simpson is playing as well as he ever has

This game would have gotten away from Michigan in the first half if not for Simpson.

Purdue was up 31-22 on the heels of a 7-0 run with five minutes to go in the opening stanza. Simpson got downhill off a pick-and-roll and, though he missed the shot, it had a high enough loft that Moritz Wagner was able to get the offensive rebound and put it back in. Simpson followed that up by stealing an entry pass to Vincent Edwards off a switch on the next defensive possession, running the floor in transition and earning an and-one. That brought Michigan within four, keeping the contest within reach for the time being.

A few minutes later, with Purdue up five, Simpson got his defender to bite faking a pass to Isaiah Livers in the corner. He got a wide open 3-pointer as a result and drained it. Next time down, Simpson got downhill off a pick-and-roll with Jon Teske, finishing at the rim in a way he probably couldn’t have at the start of the season.

“(Abdur-Rahkman and Simpson) really did a good job at getting to the rim on a couple occasions,” Beilein said. “I’d like to have a couple more finishes and they found Jon (Teske) a couple times. They did a great job. The guard play was not good in the first 10 minutes with those two and I wasn’t happy with it. The last 30 minutes it was very very good.”

Right now, Simpson is a real threat on drives to the rim and he was comfortable attacking Purdue’s switching defense. There are still moments where his size comes into play — Isaac Haas blocked him from behind after Simpson had a lane to the basket late in the game — but the sophomore isn’t tentative anymore. He can get to the rim in most situations and has developed a strong drive-and-kick game, including the five assists he notched Thursday.

Simpson was Michigan’s second-leading scorer at one of the toughest venues in the country, notching 16 points on over 50 percent shooting from the field. The development of his two-way ability has been arguably the biggest positive in a Michigan season littered with good things, and Thursday was another piece of evidence as to why.

Moritz Wagner no match for Haas down low

Beilein decided to leave Wagner on an island to defend Haas in the post, rather than doubling off of one of Purdue’s multitude of 40-percent-plus 3-point shooters.

Wagner couldn’t slow Haas down and was simply overmatched by his physical size inside. Haas had 24 points on 10-of-14 shooting from the post in just 20 minutes after missing time in the first half due to early foul trouble.

Haas did his work early and consistently had Wagner pinned so deep in the post that there was nothing Wagner could do to contest Haas’ simple hook shots near the basket.

When Purdue was up by four with about 6:40 to go in the game, they went right to Haas. Not only did he make the inevitable hook, he drew a foul as well. That was where the game started to get away from the Wolverines.

Added Wagner: “(Haas) scored a bunch at the end, but I actually thought we did an ok job. I gotta be better in crunch time.”

The strategy would look a lot better if Purdue didn’t hit 55 percent from outside, but that’s only a few percentage points above their Big Ten average.

If these two teams meet again in New York, Michigan might have to try something else, but at this rate no one has been able to stop the Purdue offense.

The Wolverines did a great job attacking ball screen switches in the first meeting in Ann Arbor and seemed to pick up where they left off.

Michigan’s pick-and-roll game was working early on as Charles Matthews showed a nice early chemistry with Jon Teske in the first half. Matthews showed some nice flashes including a great pocket pass to Teske rolling to the hoop.

Later on, it was Wagner and Abdur-Rahkman taking advantage of Purdue’s switching defense. The duo took a while to get going, but something clicked in the second half.

Abdur-Rahkman started hitting pullup 3-pointers in the faces of Purdue’s bigs. Wagner started to get aggressive and drive against the small guys. At one point, Purdue tried to redirect Vincent Edwards onto Wagner after a switch for fear of having a smaller player on him. Wagner hit a 3-pointer before Edwards got there.

“We just changed what we did,” Beilein said. “We didn’t know if they were gonna ice us or down us or switch. So we just sort of thought, ‘Well let’s just play this way in this one game and see what it does’ ”

The change worked and Michigan will look to build on that going forward.

The Wolverines played their best offensive game of the season

This will ring hollow in the wake of a loss, but Thursday was Michigan’s best offensive game all year against a Division I team.

Michigan scored 1.35 points per possession in the victory, its best offensive output since last year’s NCAA Tournament win over Oklahoma State. Mind you, this was a road game against what was the No. 3 ranked defense in the country by adjusted efficiency.

“Shots were going in,” Abdur-Rahkman said. “We just had to weather their storm as much as possible and then try to bounce back.”

All year, this is a team that’s gotten by on offense and won games on defense. The reverse happened tonight — the Wolverines’ defense wasn’t good enough — but we finally got to see what Michigan looks like when the offense is rolling on all cylinders against a good team. It nearly outshot Purdue in its own building.

We saw Michigan’s ceiling tonight. This could have easily turned into a road upset over the third-ranked team in the country. If a few balls bounce differently, the Wolverines are 2-0 against Purdue on the season and probably in the top-15. A loss is a loss, but it’s hard not to leave Mackey Arena thinking that Michigan could beat anybody on a neutral site.