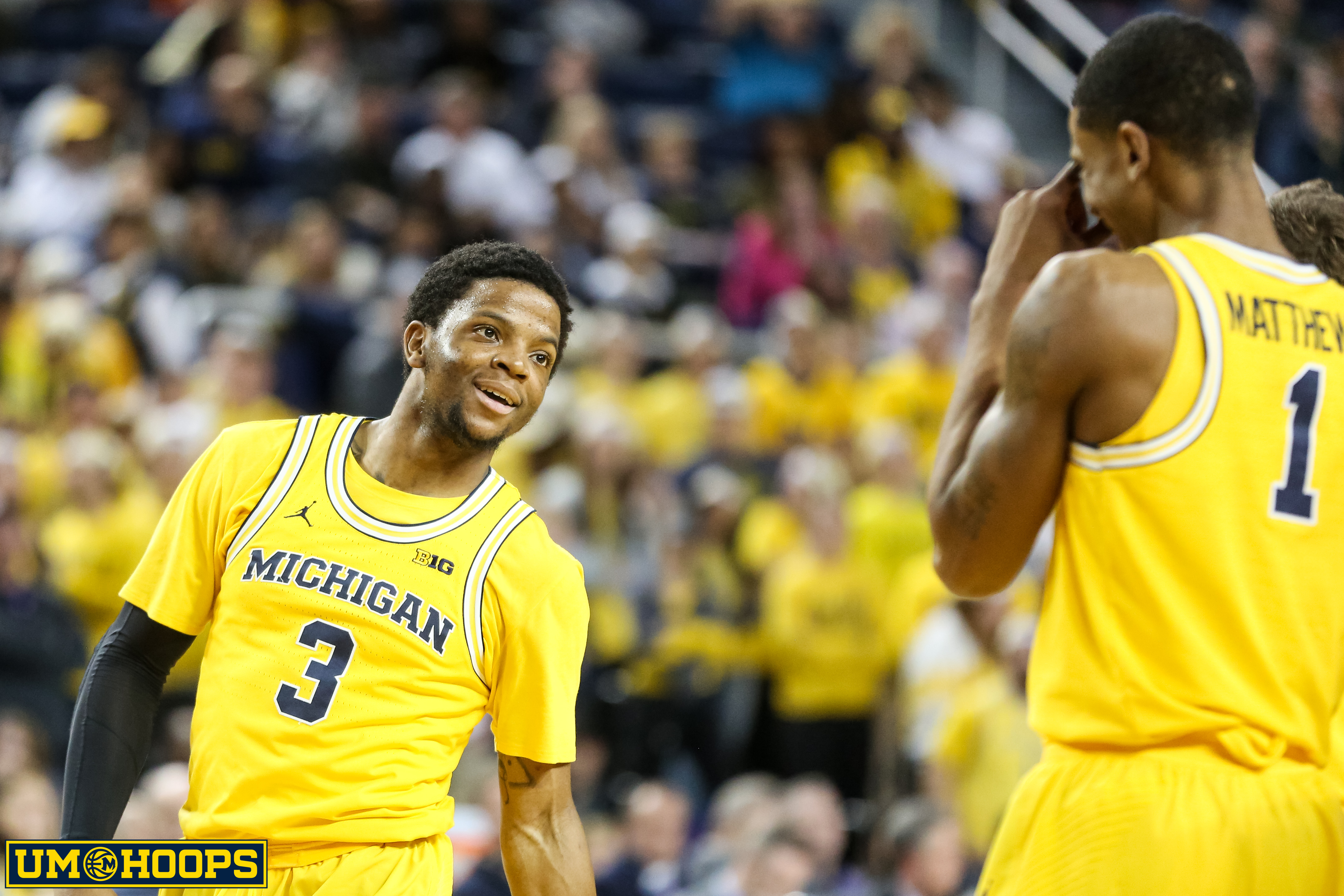 It wasn’t pretty early on, but Michigan left Crisler Center with a 58-47 win over Northwestern on Monday night. Here are five takeaways.

It wasn’t pretty early on, but Michigan left Crisler Center with a 58-47 win over Northwestern on Monday night. Here are five takeaways.

Defense is still the name of the game

“This whole press conference should be about our defense. It was exceptional.”

That was how John Beilein opened things after the game. And it’s tough to argue with him. In addition to the obvious — Northwestern scored just 47 points — the Wolverines limited it to all of 0.80 points per possession, the second time they’ve held an opponent to 0.8 PPP or worse in three games.

This win moved Michigan up to 26th in adjusted defensive efficiency. If the season ended today, that would be the best mark for a Beilein team — in Ann Arbor or elsewhere — well, ever.

Even as the offense lagged badly at the beginning of the game Monday, taking 10 minutes to climb past the five-point mark, Michigan never went down by double-digits. Once the offense got moving, even slowly, the Wolverines managed to put themselves in the lead by halftime.

The Wildcats never managed to find an offensive rhythm, as they turned it over 16 times and shot a horrendous 38.3 percent from the field, including 4-of-16 from beyond the arc. There were multiple stretches of over five minutes where Northwestern didn’t make a shot.

“We’re big on trying to get three stops in a row,” said Jordan Poole. “So it was a couple possessions where we went six stops in a row, but we weren’t getting our buckets on the other end. But, you know, when our defense is good, we were comfortable in our defense, we’re not gonna go too long without making shots. So I think that’s what we were all thinking and we kept getting stops, and then obviously our shots started falling.”

That’s been the formula for Michigan’s last two wins, both sloppy, low-scoring affairs against below average offenses at home. The Wolverines aren’t going to win a game like that against better teams in the Big Ten, but being able to win that sort of game at all is remarkable for a program that ranked 69th in defensive efficiency last season and considered it a marked improvement.

“I don’t want to get into rating against others,” Beilein said. “But I told our guys it’s as good as we’ve played right now and it had to be.”

Michigan figured out Northwestern’s zone in second half

The Wolverines reacted to Northwestern’s extended 2-3 zone like they had never seen anything of the sort. Their offense was stagnant at best at the start of the game, featuring a staggeringly low amount of off-ball movement, as possessions devolved into listless passing with no motive and drives that ended after two steps before the defense was forced to react.

More than that, it was sloppy. Michigan got stops, but didn’t get out in transition. At one point, Duncan Robinson and Charles Matthews both went for what should have been an easy defensive rebound. Instead, they deferred to each other and fumbled the ball out of bounds. A minute later, Matthews threw a pass off Jon Teske’s foot out of pick-and-roll. Michigan didn’t penetrate and didn’t force the ball into areas that weren’t covered by the zone.

“They was forcing us to take a lot of shots that were deep,” Matthews said. “You know, we couldn’t get into the paint as much.”

Added Beilein: “Some of us hadn’t seen (zone) since Hawaii. I think Chaminade may have played a little bit. …They punched us in the mouth at the beginning and it took us a while to get used to it.”

In that sense, it was a tale of two halves. After the break, the Wolverines scored 1.19 points per possession, a sea change from a first half that featured some of the worst offense Michigan had played all year.

“We just got out in transition,” Poole said. “That’s really all it was. We try to get stops and then again we couldn’t get stops, but when we tried getting stops and started running, well, that kind of opened everything up and spaced the floor. We got our tempo up.”

Even in the halfcourt, however, Michigan played with more confidence. The drive-and-kick game found life, and from there, a barrage of passes around the perimeter that went until the 2-3 could stretch itself no more. Michigan shot 4-for-10 from beyond the arc in the second half and it could easily have been better than that.

“(We) settled in, see how they were playing, see how they were moving, things like that,” said Muhammad-Ali Abdur-Rahkman. “And we just ran plays to attack that from there. We knew we had to get two feet in the paint, you kick out, that’s what we did a little bit.”

Though Michigan’s overall defense was wonderful, it’s worth taking a look at what it did in pick-and-roll specifically.

When asked about Michigan’s defense against ball screens, Matthews immediately pivoted to his own errors in pick-and-roll defense.

Michigan ranks in the 90th percentile nationally in pick-and-roll defense, per Synergy Sports, and it was on full display Monday. From talking to the players, you would never know it.

Matthews has had some of his better offensive performances against zone defense this years and has excelled at finding pockets of space. He scored Michigan’s first five points and finished as the Wolverines’ leading scorer with 14 on 6-of-11 shooting.

It wasn’t an otherworldly performance, but Michigan was happy to take it.

“I want him to hunt,” Beilein said. “But there’s certain shots that you hunt that just aren’t — they’re tough 2s — and they’re just not good analytically. And it’s proven, they’re not good shots to take. And so, I want him — but at shot clock time, he’s gotta really hunt. And I think that sometimes, he’s still learning, ‘Well, I’m in a ball-screen or I’m doing things. I gotta look at the basket.'”

It’s easy to look at Matthews as a pure offensive scorer who doesn’t do much else, but Beilein is pleased with how he’s learning to distribute the ball as well. He didn’t have an assist against Northwestern, but had six last Thursday.

“He had six assists at Purdue,” Beilein pointed out. “That was a monumental move for him to be able to see that and score some points. But he’s still gotta hunt shots. He’s gotta be a guy that’s out there. He’s gotta be a wolf for us.”

In the waning moments of a game that was no longer in doubt, Michigan nearly lost its starting point guard. Simpson was backpedaling after guarding his man on an inbounds pass and ran straight into a Northwestern screen. He was on the floor in pain for a brief spell, then went to the bench for the contest’s last 23 seconds.

According to Beilein, however, this was nothing serious.

“I think he’s ok — he took a heck of a shot on that,” Beilein said. “Looked like a legal screen too. Looked like he just didn’t see it. We needed a five-man to tell him the screen was coming.”

Simpson had a less than inspiring game on the offensive end, notching four points on 1-of-4 shooting with three assists, but played his normal disruptive defensive game.

Simpson’s late free throw shooting issues were on display once again on Monday night. Michigan tried to mitigate his struggles by using Simpson as the inbounder instead of Abdur-Rahkman. Even so, Simpson was sent to the line twice, sinking both the first time and missing both the second, after which he was pulled.

“I was taking him out if he missed the first two,” Beilein said. “And then we were gonna go with Jordan. We sort of have a plan there. And so, had him inbound the ball late, and if you hear me yelling ‘Ohio’ it means he’s inbounding the ball. And so we’re making adjustments.