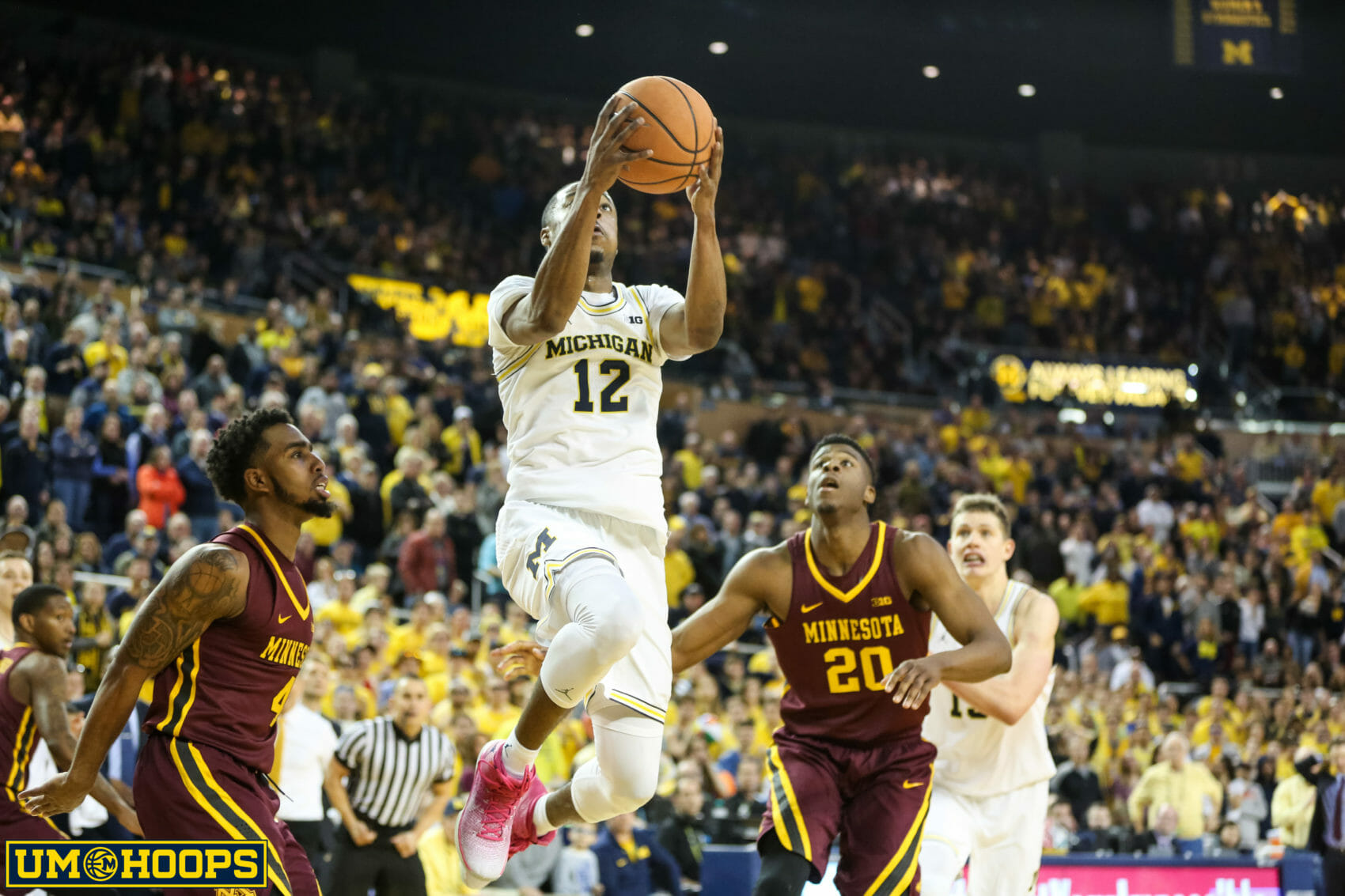 There’s no such thing as a bad win, but I’m not sure that Michigan has won many less satisfying conference games than Saturday’s 76-73 overtime escape against Minnesota.

The Wolverines made just 12 of 28 free throws and blew a 5-point lead in the final 28 seconds of regulation — a turn of events that included two missed free throws and a traveling violation while Minnesota was attempting to intentionally foul — but they regrouped and figured out a way to win in overtime.

Muhammad-Ali Abdur-Rahkman was the hero, connecting on game-winning layup through contact to win the game with four seconds remaining. 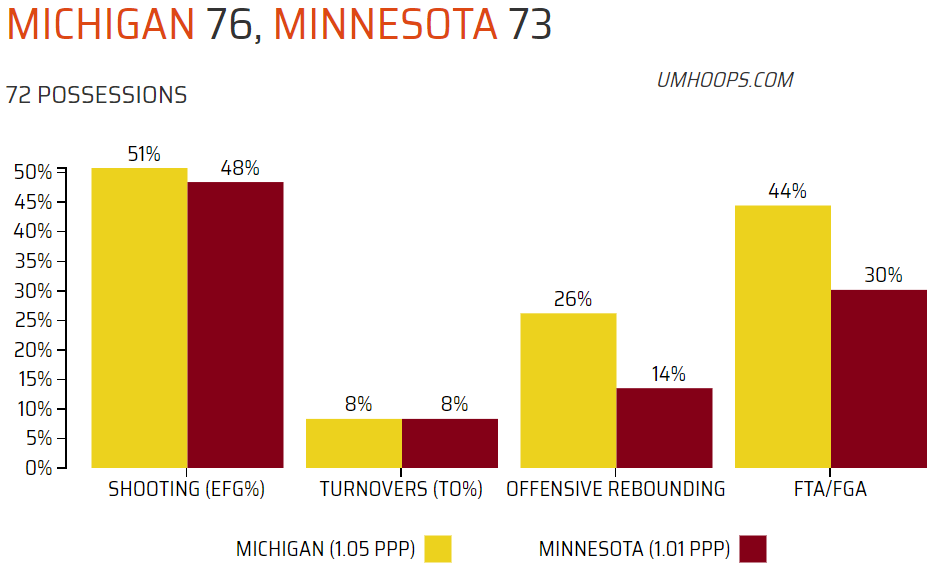 Michigan scored 1.05 points per possession despite shooting 25% on threes and 43% on free throws. Despite all of those ugly offensive numbers, Michigan’s offense was very effective attacking the basket. The Wolverines made 20-of-31 2-point attempts (65%) and consistently got to the free throw line. Of course those trips to the charity stripe weren’t all that helpful.

If Michigan shoots its season average — a mere 65.5% — at the free throw line then we are talking about a comfortable win and one of the better offensive performances of the year. But that didn’t happen and the free throw shooting was dreadful. Michigan made its first five free throws of the game and then went on to make just 7 of its final 23 attempts at the line. Charles Matthews led the way with 7 misses, but five other Wolverines missed at least 1 free throw.

Michigan was the 9th best free throw shooting team in the country last year and is ranked 341st this year — worst among high-major teams. The problems are mental, physical and everything in between and even if that doesn’t show up on Richard Pitino’s scouting report, it will be an issue moving forward.

The Wolverines did do some things well in this game, which is how they were able to win despite such a woeful free throw and 3-point shooting performance. Michigan kept Jordan Murphy off the glass and won the rebounding battle, grabbing 86% of Minnesota’s misses. The Wolverines were also fairly aggressive crashing the glass and scored 13 second chance points.

The difference in both team’s 2-point shooting was striking. Michigan was attempting layups and Minnesota was making tough pull-up jumpers. Here’s the shot distribution between both teams. 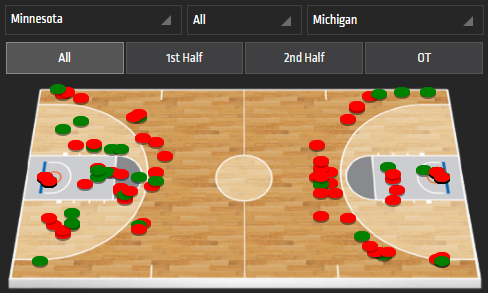 By that chart I have Michigan with 1 mid-range jumper (on just 5 attempts) and Minnesota with 11 (on 24 attempts). Those are the exact shots that John Beilein wants to allow, but the problem is that they were going in.

Isaiah Washington entered Saturday’s game shooting 27% on twos and 31% on threes in league games, but he finished with 26 points on 11-of-16 shooting. Nate Mason added 22 points of his own. Only six of Minnesota’s 28 makes were assisted and Richard Pitino’s offensive gameplan was simply to isolate on Michigan’s guards.

That meant that the Wolverines had to throw in a wrinkle midway through the second half and switch to a zone that we haven’t seen for more than one or two possessions all year. Michigan played that zone defense for the majority of the final 12 minutes and overtime and the switch worked. By my notes, I had Minnesota scoring 18 points in 25 possessions against the zone, which looked to have hints of some matchup action.

Michigan is a good team, but games like this are a reminder that the Wolverines are closer to bubble-plus than league contender. The Wolverines continue to trail in games late in the second half — they were down 10 with 11 minutes remaining today — and sooner or later than habit will catch up to them.

Michigan is outsccoring Big Ten teams by 4.9 points per 100 possessions, that’s a good but not great number. Teams like Michigan State, Ohio State and Purdue are closer to a 20 points per 100 possession efficiency margin. Every game for Michigan is a grind at this point and there’s not much margin for error this week with trips to Northwestern and Wisconsin on the docket. 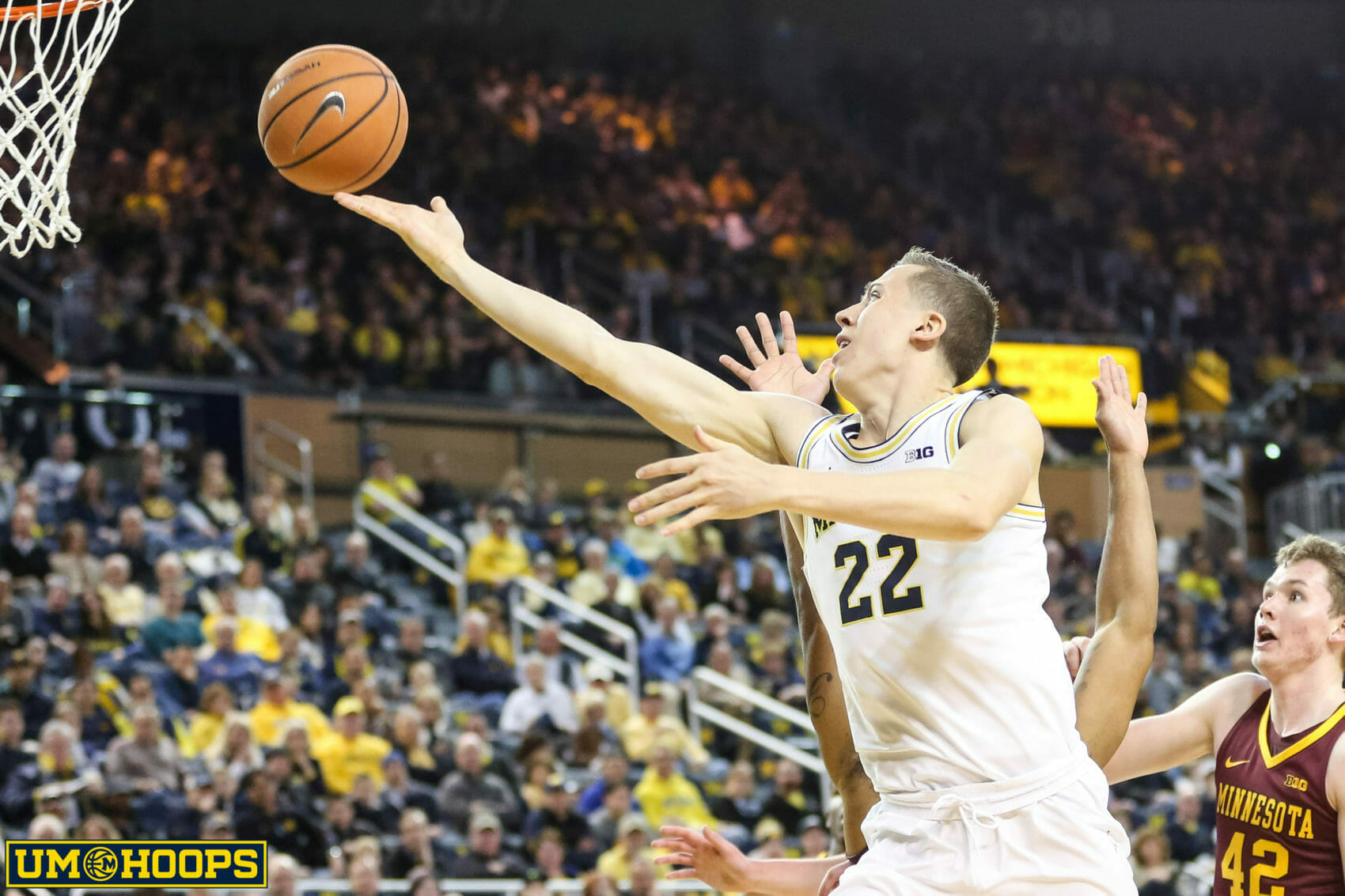 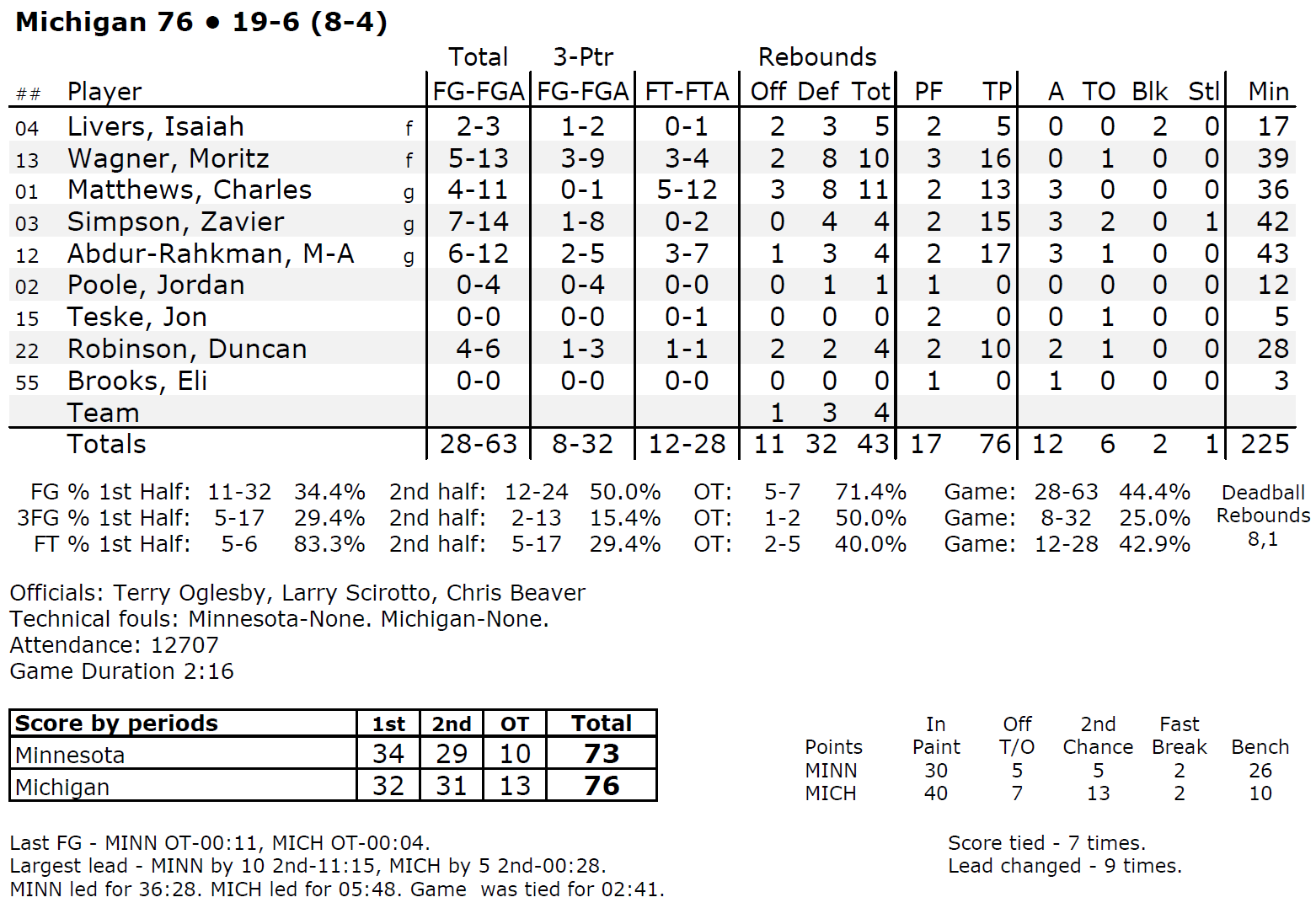