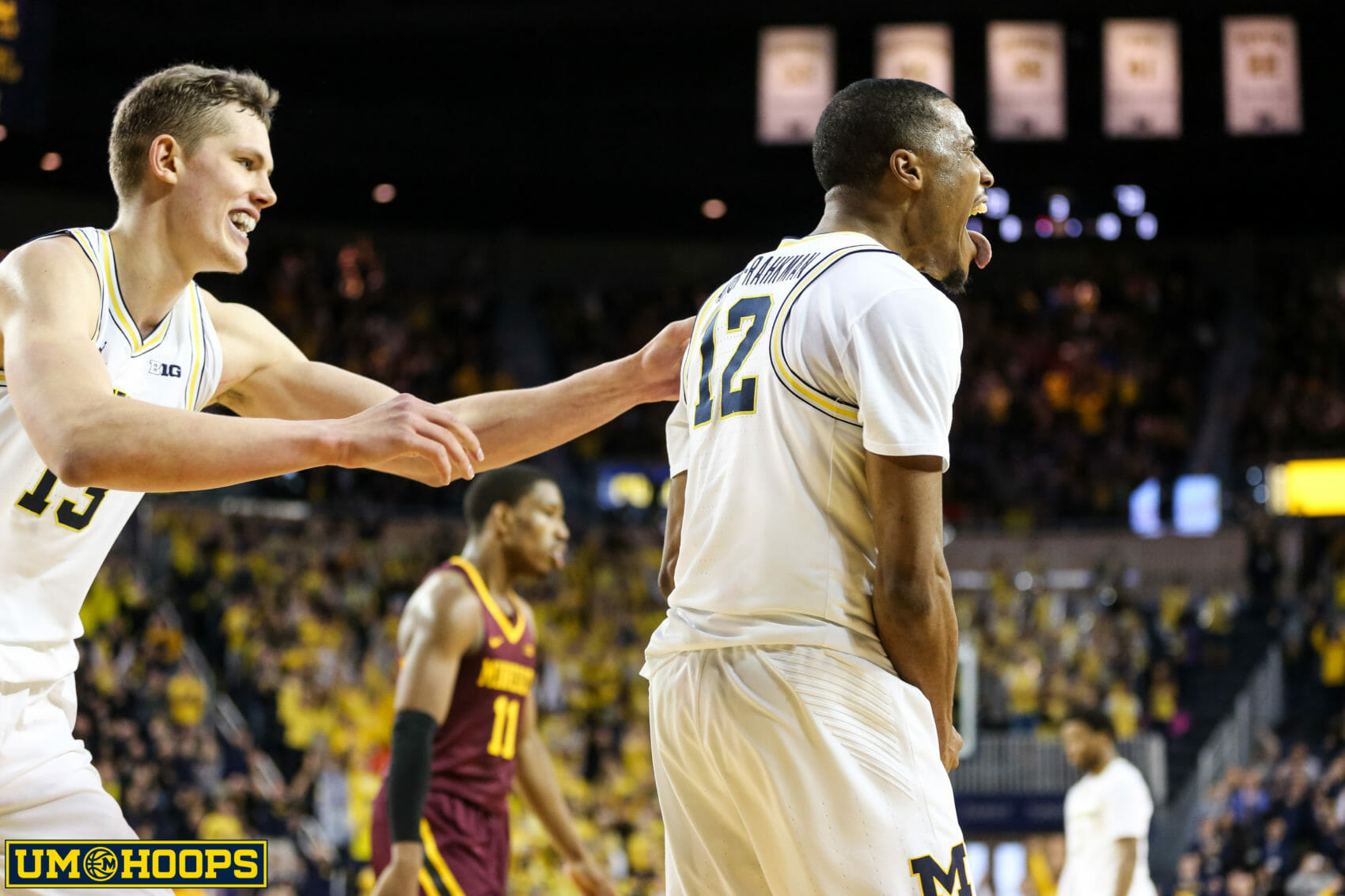 Yet again, Michigan finds another way to win

John Beilein walked up to the podium, looked at the two-dozen or so assorted reporters waiting for him, and began speaking.

“I never thought we’d be coming in here and talking about a win again,” Beilein said. “After the way that we shot foul shots, the way we settled in the first half, and the energy that we saw from some of our guys. Thank goodness, in the second half, we were able to attack a little bit more. We still didn’t make foul shots but we found a way to win.”

That was the theme of the day, perhaps the overarching theme of this season: the Wolverines have found ways to win, over and over again, like they did Saturday afternoon with a 76-73 overtime victory over Minnesota.

Of course, what other way would the game have begun than with a slow start from Michigan? The Wolverines struggled early and often, falling behind after just 1:25 (they wouldn’t tie the game until 16:58 of the second half, or take their first lead until 3:13 remained) when Nate Mason drilled a 3.

Mason, who finished with 22 points on 9-of-18 shooting, was unstoppable early, hitting an array of impressively difficult shots. He had his team’s first seven points and nine of its first 10.

His teammate, Isaiah Washington, soon joined in. Washington entered the game shooting around 30 percent on both 2s and 3s in conference play, averaging just 32 percent from the field on the year overall. Against Michigan, he looked like an All-Big Ten guard, converting acrobatic layups and floaters. Washington would finish with a career-high 26 points on 11-of-16 shooting, scoring 13 in each half.

“Their guards were really having a hay day on our guards,” Beilein said. “… There were some tough shots that only those two kids in this league can get.”

“It hurts,” Abdur-Rahkman said. “You miss two free throws, it’s basically like you turned the ball over. You don’t get that possession. It’s tough. You’ve got to at least make one.”

After the game, Beilein was left wondering what else he could have done to help his team at the line. He explained how he usually told his players to think about their mother in hopes of relaxing them, and how he might need to do that more often down the line — if not find another solution to his team’s mental roadblock.

“We have a positive outcome meditation they do. I didn’t think we were going to have to resort to that, but we’re ready for anything right now,” Beilein said. “A hypnotist — I’m going to find out anything we can do right now. I think on my Le Moyne team, and we had a bunch of big guys, in 1983 or 1984, was the same thing. It’s been a good 30-some years since we’ve had this issue.”

Mason and Washington’s prowess, combined with the missed free throws, appeared to send the game snowballing out of control.

And then Michigan does something it very rarely has in the past few years: it played zone for a very long time.

The Wolverines made the switch to a zone around the 12-minute mark of the second half, just as Minnesota was about to take its biggest lead on the day.

Almost immediately, the move — a suggestion on the part of Luke Yaklich — paid dividends.

“… (Mason and Washington) were making tough 2s, and so we said, the only way we can possibly stop this is change what we’re doing,” Beilein said. “… I’m glad I listened to Luke and we did that because I think it was a factor in us winning.”

While Richard Pitino said after the game that he thought his team found good shots against the zone, Minnesota struggled to make open looks, allowing Michigan to claw itself back into the game.

The Wolverines have prided themselves on their defense, and it was the defense yet again that made a huge contribution to the win. Yet the manner in which it happened was certainly unexpected.

“We work on it a little bit almost every day,” said Abdur-Rahkman, who believes the last time the team stayed in a zone for that long was during his freshman year. “But we never really expect to use it.”

And though the zone defense keyed Michigan’s comeback, the Wolverines still nearly gave the game away even after taking a five-point lead with 28 seconds left. First, the usually unflappable Abdur-Rahkman missed a pair of free throws, before Washington hit a tough shot to cut it to three. The play that followed left John Beilein with “no idea” of what had happened, as two Golden Gophers forced Duncan Robinson to travel even as their own coaching staff was yelling at them to foul.

“There’s a cylinder that when you’re pivoting, they can’t be in your cylinder,” Beilein said. “If he walked, I’m sure it must have been blatant for the official. If it was not a walk, then that’s really a bad call.”

And then Michigan committed another gaffe when it botched a switch on a screen Minnesota set for Mason out of an inbounds play. The senior guard canned the 3, tying the game and quieting a once raucous Crisler Center.

Luckily for Beilein and Michigan, the mistakes that they made in regulation won’t haunt them as much as they would have with a loss. Zavier Simpson scored seven points in overtime, including the first — and only — 3 he made in eight attempts. And with four seconds left, Abdur-Rahkman finished at the rim after spinning around his defender, giving his team the lead one final time. He hit the free throw, too, to cap things off, before walking slowly back to the bench with Jordan Poole’s left arm around his neck after Mason’s final attempt missed.

It was a muted reaction to a big win and the avoidance of what could have been a brutal loss at home. And as Beilein concluded his press conference, he summed up perhaps what Abdur-Rahkman and many others were feeling after the topsy-turvy, back-and-forth game in just four words: “I need a nap.”

Yet again, Michigan finds another way to win