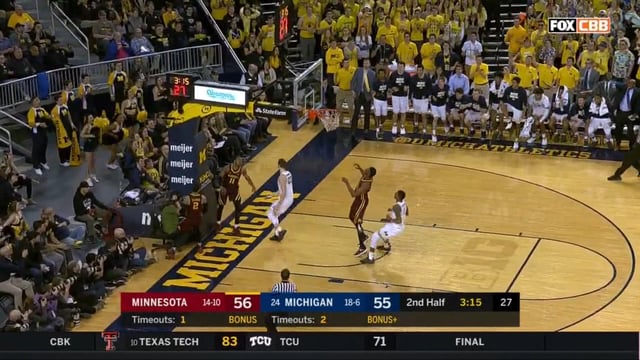 Here are Five Key Plays from Michigan’s win over Minnesota.

John Beilein didn’t expect his team to leave Crisler Center with a win.

There were missed free throws galore. Nate Mason and Isaiah Washington couldn’t seem to miss. And yet Michigan stormed a second-half comeback before winning in overtime, thanks to a large serving of zone defense and timely playmaking from its backcourt.

Here are five key plays from the Wolverines’ 76-73 win:

With 16:58 left in the second half, Michigan tied the game at 37 thanks to Charles Matthews’ first field goal of the game. But it would take much longer for the Wolverines to take their first lead of the game.

Minnesota eventually stretched its lead to as large as 10 in the second half before Michigan began to turn the tide. After Nate Mason gave the Golden Gophers a seven-point lead with 6:34 left, the Wolverines began their move. Duncan Robinson scored after grabbing an offensive rebound. Zavier Simpson laid one in at the rim. Charles Matthews hit an off-balance shot.

And then, with 3:13 remaining, Simpson stole the ball near the top of the key, flipped it to Robinson in transition, and watched as the senior forward finished at the rim to give Michigan its first lead of the game.

2. Michigan ices the game … or so everyone thinks

It seemed inevitable that the Wolverines would walk away with a win after Minnesota played sloppily over the final few minutes.

With just under a minute left, Muhammad-Ali Abdur-Rahkman, who finished with a team-high 17 points, drove to his right and finished with a floater high off the glass, giving Michigan a 61-58 lead.

And then Robinson found Matthews for a wide-open dunk after the Golden Gophers couldn’t decide whether they were going to trap or foul the ball handler. It certainly seemed over once Abdur-Rahkman stepped to the line for two free throws with just 18 seconds remaining …

But the game wouldn’t end that easily. Abdur-Rahkman missed both free throws, Isaiah Washington sprinted down the court and hit another tough shot, and the lead was down to one possession again.

As Minnesota’s coaching staff yelled for their players to foul Duncan Robinson, the whistle blew: Robinson was called for traveling on a play that baffled even Michigan’s head coach.

“I have no idea what happened on that play,” said John Beilein. “There’s a cylinder that when you’re pivoting, they can’t be in your cylinder. If he walked, I’m sure it must have been blatant for the official. If it was not a walk, then that’s really a bad call.”

Michigan only worsened the issue with a blown defensive assignment off Minnesota’s inbounds play, botching a switch that gave Mason a wide-open three that he promptly drained. Tie game.

Michigan’s starting point guard had a rough game for most of Saturday’s matchup. But when the two teams tipped off overtime, he seemed to flip a switch.

With 4:26 left, Simpson drove to the basket assertively to retake the lead. Then, after he had missed his first seven attempts, he drained a 3, giving his team a four-point lead. Perhaps most crucially, Simpson drove to the basket with just 22 seconds left and scored, giving his team another cushion. Simpson scored seven of his team’s 13 points in overtime and finished the game with 15 points on 7-of-14 shooting with four rebounds and three assists.

“He’s just a tough guy. He’s like a little pitbull,” Abdur-Rahkman said. “He never backs down, even when he misses the free throws, anything like that, he never shies away from anything. It’s great to have somebody like that out there who’s always going to fight and scrap to the end.”

Added Beilein: “He and Muhammad did a great job in overtime.”

Perhaps it was fitting for Abdur-Rahkman to win the game after he had given Michigan its late lead in regulation. After Davonte Fitzgerald knifed through the defense to tie the game at 73 with 11 seconds left, Abdur-Rahkman had the ball on the right side of the court. He quickly noticed how Minnesota’s defense was guarding Michigan, and made a decision.

“I just looked up the floor, surveyed the floor, and I saw there was nobody underneath the basket,” Abdur-Rahkman said. “So if I could get downhill, there wouldn’t be a help defender. And once he cut me off, I thought I should probably spin since there was nobody there, so that’s what I did.”

It worked to perfection. Abdur-Rahkman spun past Jamir Harris, drew a foul and scooped in the ball to give Michigan the win. The play even drove the normally stoic senior to celebrate, sticking his tongue out in triumph after hitting the layup.

“It was a great move,” said Moritz Wagner, “and that’s what we expect and need from our leader.”