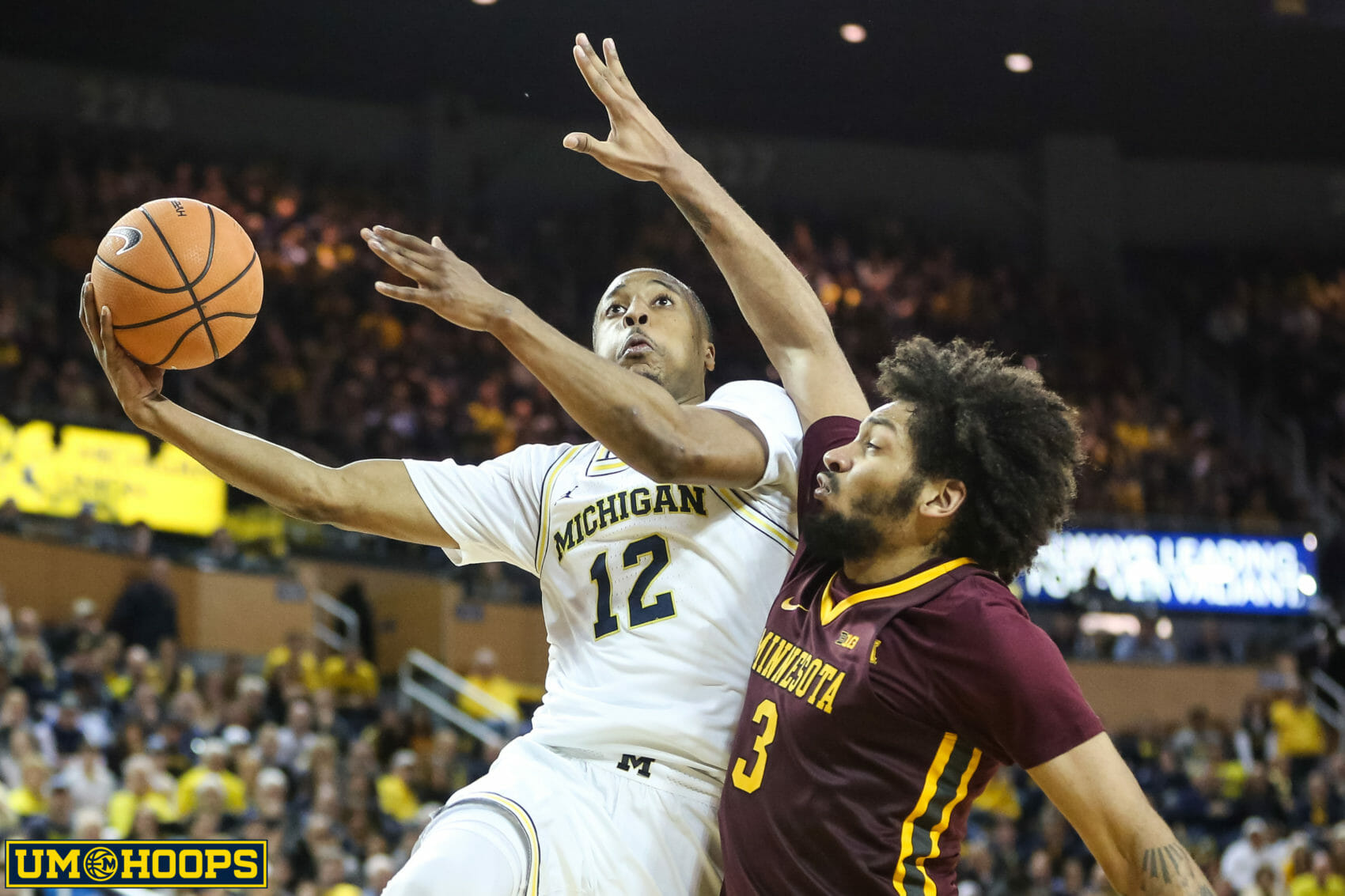 Though Michigan had mounted a comeback of its own only minutes prior — playing from behind nearly the entire game before going up in the last three minutes — the Wolverines nearly handed it right back to the Golden Gophers. Muhammad-Ali Abdur-Rahkman was sent to the line with 18 seconds to go and the chance to make it a three possession game. A 79.7 percent free throw shooter, Abdur-Rahkman missed both.

Abdur-Rahkman started the season 34-of-37 from the line. He’s just 13-of-22 since he hit the game winning free throws vs. Maryland.

Minnesota’s Isaiah Washington got out in transition off the second miss and converted a layup to bring the score within three. But even so, it would have taken a turnover or more missed free throws from Michigan for the Golden Gophers to have a chance. That’s just what happened. Duncan Robinson was trapped off the ensuing inbound pass and called for a travel. The call was controversial, but it was a mistake from Robinson nonetheless.

“I have no idea what happened on that play,” said John Beilein. “There’s a cylinder that when you’re pivoting, they can’t be in your cylinder. If he walked, I’m sure it must have been blatant for the official. If it was not a walk, then that’s really a bad call.”

The play Minnesota ran was startlingly similar to what Maryland ran for a game-tying 3-pointer against Michigan just a couple weeks ago. It was simple: set a pindown for the best shooter on the floor and hope he gets open. In the Terrapins’ case, it was Kevin Huerter. For the Golden Gophers, Nate Mason got the call and took it.

And, like Huerter, Mason only came open because a blown switch on the pindown, according to Beilein. The two plays weren’t identical — Maryland found Huerter out of the post and Minnesota found Mason from a baseline inbounds. But the same action — and the same defensive error — got the shooters open.

“I’m trying to figure that out,” Beilein said. “I think we have talent in different areas. For this coaching staff to try to bring it together is a challenge. A couple years ago we had a team like this that was very slow in some aspects of the game that are elementary to the game. Not some crazy play I put in. Like that switch out on Mason, it’s stunning that we wouldn’t do that.”

The script flipped in overtime, thanks to some timely shot-making from Zavier Simpson and an and-one from Abdur-Rahkman with 3.8 seconds to go. But the game never should have gotten that far to begin with.

The Wolverines escaped on Saturday, but it’s hard to argue they deserved it. Michigan shot a fairly average 50.8 effective field goal percentage from the field and it was higher than their abominable 42.9 percent from the line.

The issues have been largely confined to Charles Matthews and Simpson for most of the year, but Abdur-Rahkman struggled as well on Saturday. He went 3-of-7 at the line and missed two that could have sealed the game. Matthews was 5-of-12. Simpson was 0-of-2. It was a festival of iron.

“We have a positive outcome meditation they do,” Beilein said. “I didn’t think we were going to have to resort to that, but we’re ready for anything right now. A hypnotist — I’m going to find out anything we can do right now. I think on my LeMoyne team, and we had a bunch of big guys, in 1983 or 1984, was the same thing. It’s been a good 30-some years since then we’ve had this issue. Don’t take it for granted going forward because we were so good last year, if you look at our numbers, so good.”

Added Moritz Wagner: “I think at this point, it’s nothing mechanical or something. I don’t know, we do it wrong or if it’s just in our head. We had a phase where we were missing free throws and then we told ourselves, ‘We’re just gonna stop missing free throws.’ And there you go at (Michigan State), Breslin Center, shooting 19-for-19 until X misses a couple.”

Since that win over the Spartans, Michigan has collectively shot 55.9 percent from the charity stripe. It won’t keep winning games if that isn’t fixed.

Beilein himself put it best: “Guess what, if you’re winning games, you’re gonna get fouled late in the game.”

As long as the Wolverines are winning, they’re going to be forced to shoot free throws. If they continue to struggle doing so, opposing teams will start sending them to the line earlier and earlier. Michigan got away with it today, but that was the exception, not the rule.

Abdur-Rahkman had an offensive rating above 110 for the fourth straight game on Saturday, knocking in 17 points on 6-of-12 shooting from the field along with three assists. As Michigan was mounting its 10-point second half comeback, he was all over the place, creating looks for himself and others off drives, hitting a 3-pointer of his own to bring the deficit to five, and getting to the line (though his performance once there left something to be desired.

“The way he responded to criticism was big time today,” Wagner said. “Made some big plays, big shots. That’s what we need from our leaders.”

Added Beilein: “He’s never been dialed up like this.”

Abdur-Rahkman played 43 minutes, the most of any Wolverine, and contributed good defense as well. Oh, and he hit the go-ahead shot in overtime, a spinning layup that got him to the free throw line as well. When it mattered most at the charity stripe, he didn’t disappoint.

“I just looked up the floor, surveyed the floor, and I saw there was nobody underneath the basket,” Abdur-Rahkman said. “So if I could get downhill, there wouldn’t be a help defender. And once he cut me off, I thought I should probably spin since there was nobody there, so that’s what I did.”

He’s become a go-to player late in games, drawing the game-winning free throws against Maryland as well. It’s no accident that Wagner referred to him as a leader. Abdur-Rahkman is becoming the person everyone looks to late in games. And lately, he’s delivered.

Michigan’s defense was better than it looked

By defensive efficiency, this was a ho-hum game for the Wolverines, who allowed Minnesota 101.2 points per 100 possessions, slightly better than their average in the Big Ten thus far.

That number, however, doesn’t take into account the types of shots Michigan was forcing the Golden Gophers into taking. Throughout the game, Nate Mason and Isaiah Washington were pulling up for the type of midrange jumpers that make any analytically-oriented viewer cringe. And yet, they kept going in.

That doesn’t have much to do with Michigan’s defense though. Small samples are fickle and these were the shots the Wolverines want their opponents taking.

“They were making really tough shots,” Wagner said. “I think their point guards, Washington and Mason are great players, adjusted really well. Especially then, you gotta limit the opportunities, box them out, and keep believing, beating the gaps. I think we didn’t do a good job with that, beating the gaps and guarding the lanes, but, they made tough shots as well.”

The game started to turn when Michigan made the rare switch to a 2-3 zone at the behest of assistant coach Luke Yaklich.

“They were making tough 2s,” Beilein said. “And so we said, the only way we can possibly stop this is change what we’re doing. We work on it every other day in case we get in this situation. I’m glad I listened to Luke and we did that because I think it was a factor in us winning.”

The stops started coming and the comeback started mounting. Minnesota scored just 13 points in the last 11 minutes of regulation as it struggled to figure out the zone.

“Tt was a great, great call because we finally got stops,” Wagner said. “And we gave them something to think. And they still make tough shots, but we kinda worked it out.”

Wagner casually put up a double-double, with 16 points and 10 rebounds against a defense that tried to switch everything. Out of ball-screen looks, he was more aggressive slipping screens and it worked.

He gave himself a wide open corner triple after slipping a pick-and-pop with Simpson early in the game, then slipped an off-ball screen and found an open dunk later on. Both Simpson and Matthews had open driving lanes off similar looks as well.

“We work on it every day,” Wagner said when asked about his improvement against switches. “I think there’s a certain point where you get to feel comfortable with it and we did a good job with that. I think our point guards feel a lot more comfortable attacking off the bounce and doing their thing. And I feel a lot more comfortable playing down there against the little guys and just making easy plays. You don’t always have to go for a home run, you can go for singles.”

As far as facing man defense goes, scoring against switches was really the last frontier for Michigan. Doing it consistently is another issue, but on Sunday, the Wolverines looked as good as they have all year. That was thanks, in large part, to Wagner.

After Saturday, Wagner is also second in the Big Ten in defensive rebounding percentage, per KenPom, with an astounding improvement of over 10 percent from last season. Michigan, in keeping with the trend, kept Minnesota off the offensive boards on Sunday, thanks in no small part to eight defensive rebounds from the junior.

“I think the key to our defense is to limit their opportunities and rebound,” Wagner said. “So, with regard to that, they’re really good offensive (rebounders) down there, so we did a really good job of that and I’m proud of the way we competed.”