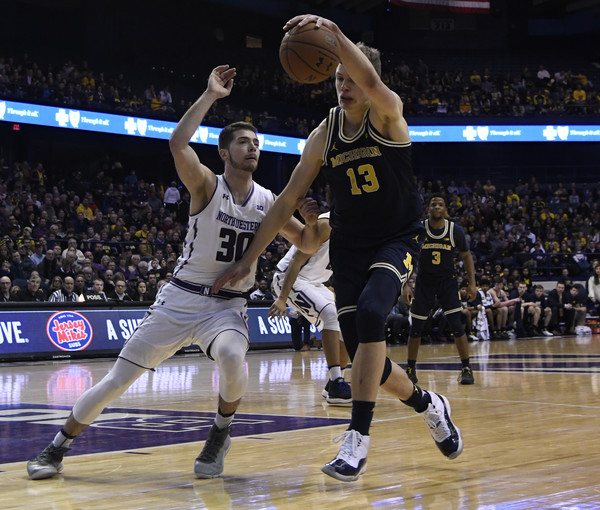 Just eight days ago, Michigan won an ugly, low-scoring affair against Northwestern at Crisler Center. On Tuesday, the Wolverines dropped a similar contest on the road at Allstate Arena, 61-52, despite having control of the game throughout the first half. Here are five takeaways.

The first blow for Michigan was dealt just two minutes into the game. Isaiah Livers came up lame and limped off the court after defending a Bryant McIntosh drive. He did not play the rest of the night.

According to John Beilein, it was an left ankle injury. Beilein believed it to be a sprain, but couldn’t be sure. Livers did test the ankle at halftime, going out on the court for warmups and even taking a shot. However, it was clear he wasn’t good enough to play.

“The fact that he wanted to go out and try it again means it’s probably not — not great or anything like that — but it may be an ankle sprain,” Beilein said.

The injury forced Duncan Robinson into extended duty at the four position. Robinson played 36 minutes on Tuesday and was unable to find his shooting stroke. The Wolverines worked in a couple minutes with Matthews at the position, but quickly went away from it. Presumably, that would be an option if Livers were to miss extended time, but Michigan would be stretched thin.

The chain reaction of moving Matthews to the ‘4’ would be extended playing time for Jordan Poole at the ‘3’. Poole has struggled with his shot over the last couple games — including Tuesday, when he was just 1-for-6 from the field with a sloppy transition turnover — but he provides an offensive option.

The offense fell apart in the second half

Michigan’s first half offense was by no means great, especially after the Wolverines’ initial 13-2 run. But it doesn’t get much worse than the second. Michigan scored all of 20 points — a putrid .69 per possession — as the Wildcats broke out their extended matchup zone and rode it to victory.

“We had a good plan,” Beilein said. “When they adapted to our plan, we could not adapt very well.”

The zone look gave Michigan trouble last week, as well, but it still managed to pull out a win thanks to defense and a hot second half performance. Not much changed. The Wolverines didn’t get many chances in transition and once Northwestern could play in the half-court, it shut down all of the Wolverines’ options, forcing stagnancy and late-in-the-shot-clock clunkers.

“I don’t know if we had a week prep (against the zone) it would make a big difference,” Beilein said. “It is really good…You very very rarely see it, especially with that type of length everywhere.”

Added Moritz Wagner: “I think we didn’t get a lot of stops and so we couldn’t get running. We couldn’t get in the flow where you don’t have transition. And then we missed a lot of free throws too.”

Michigan shot just 68.4 percent from the line — an improvement from Saturday, but only by default — and missed a handful of free throws during critical moments in the second half.

The good news for the Wolverines is that they probably won’t see this defense unless they play the Wildcats again in the Big Ten Tournament.

During the early parts of the game, there were some really impressive sequences on defense. Michigan was rotating nicely, controlling gaps well and doing all the little things. It was a different level of focus than we saw from the Wolverines at times on Saturday. Somewhere along the way, it broke.

Northwestern averaged 1.1 points per possession in the second half as it built up a lead that went as high as 10 before landing at nine when the buzzer sounded. According to Beilein and Wagner both, the difference between last week and Tuesday was simple: the Wildcats made more shots.

“They got pretty good shots against us at our place as well,” Beilein said.

Fair enough, Northwestern played as bad an offensive game as you could have expected at Crisler, but shot-making wasn’t the only thing that changed. The Wildcats got to the rim more and there were a fair number of defensive errors to harp on for Michigan.

On one play, Muhammad-Ali Abdur-Rahkman closed too hard trying to recover from help defense. When his man drove to the rim, he ran into Zavier Simpson trying to catch up, handing Dererk Pardon an easy layup. Michigan wasn’t hapless, but it didn’t play a good defensive game, especially late on.

“It was a similar game plan to last time.,” Wagner said. Obviously it didn’t work out as well as we had planned it, because they made a lot more shots, and they found their way to the rim.”

The immediate effect of Livers’ injury was Robinson shouldering a bigger load. He played 36 minutes — tied for his season-high — and struggled.

Robinson scored just three points on 1-of-6 shooting, still unable to permanently break out of his slump. After a good performance against Minnesota, it seemed that might be a possibility. When he hit his first shot — an above the break 3-pointer — it felt like a possible watershed moment in his season. He didn’t score again for the rest of the night.

“Certainly we (would’ve) gave Duncan a rest,” Beilein said, when asked about the impact of Livers’ injury. “And I think you can’t probably put a measure on what that does to Duncan’s shooting.”

To state the obvious, Michigan will need more from Robinson if Livers is out, both in terms of minutes and production. Right now, it’s hard to say confidently that he can give them that. There have been good signs — Robinson’s performances against Minnesota and Rutgers were strong — but at some point Michigan needs the career 42 percent 3-point shooter to make his open 3-point attempts.

Michigan’s 3-point shooting has to get better

At this point, it is hard to call Michigan anything other than an average 3-point shooting team.

The Wolverines are shooting 35.4 percent from beyond the arc for the season and 35.3 percent in league games. Those numbers are ranked 149th nationally and 7th in the Big Ten. The Division I average for 3-point accuracy is 35.1 percent.

Michigan might have some good days, but on the whole this team is just an average shooting team, a step back from last year’s group which shot 38.5 percent from deep.

At no time is that more evident than in losses. On Tuesday, Michigan was 5-of-22 from beyond the arc and 1-of-10 in the second half. Even Wagner, who put in the team’s only good offensive performance, was just 1-of-4 from outside in the game. Part of that is the zone, for which the Wolverines didn’t have an answer.

“We couldn’t get many open looks today,” Beilein said. “We could not get open looks today. But we haven’t shot the ball well in a bit, so maybe (we were) a little tired.”

The Wolverines are shooting just 31 percent from 3-point range over the last six games and that number drops to 26 percent if you remove the 13-of-23 showing at Purdue. 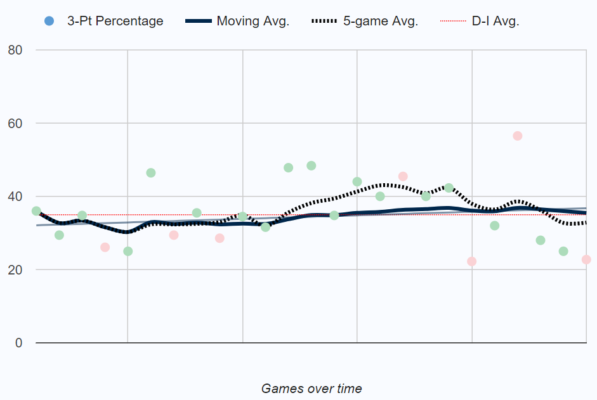 If Michigan wants to put things together a make a run down the stretch, the threes will have to start falling.