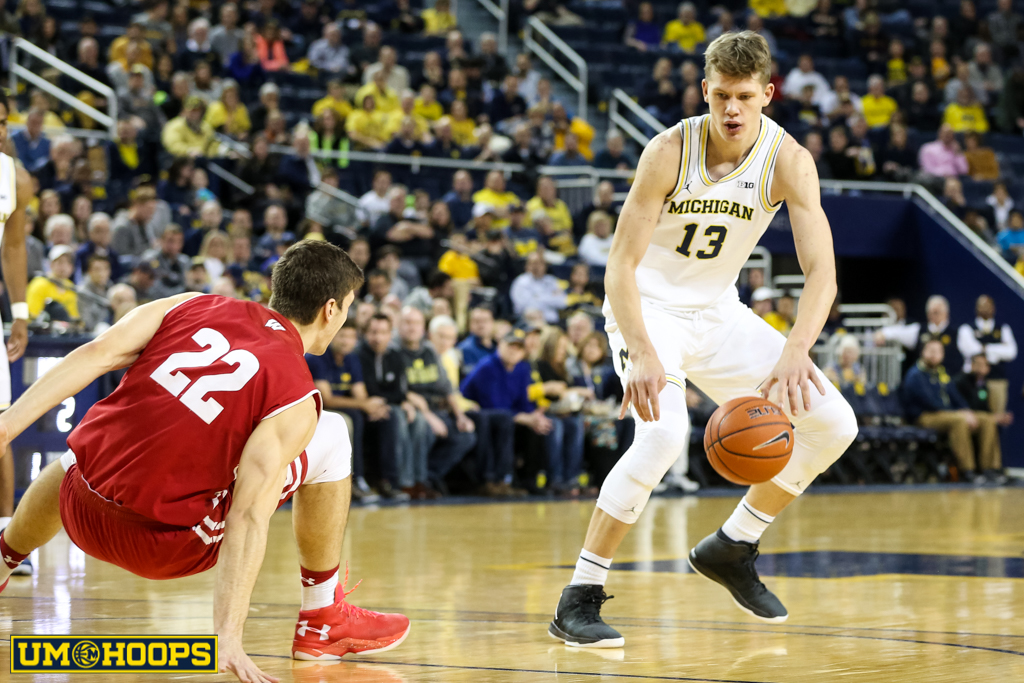 Michigan and Wisconsin will meet for the first and only time of the regular season on Sunday afternoon in Madison (1 p.m., CBS).

The Badgers have only won 2 of their last 10 games with both victories coming over Illinois. They’ve also had to play 7 of their last 10 games away from home and now will close with 4 of 5 in the Kohl Center. Big Ten basketball is all about who and where you play which should give Wisconsin at least a bit of hope at a strong finish to the season.

At just 11-15 overall, Wisconsin has the worst record in the conference, but has also played the most difficult schedule (ranked 27th per KenPom). The Badgers have weathered injuries to D’Mitrik Trice, Kobe King and Charles Thomas and just have never been able to get quite enough help around Ethan Happ to put things together this year.

Wisconsin’s offense is scoring just .99 points per possession in Big Ten games, third-worst in the league. The Badgers turn the ball over more often than you’d expect from a Badger team, on 19% of their offensive possessions, but mostly just aren’t a great shooting team. In Big Ten games, Wisconsin is shooting 48.4% on twos (9th) and 32.4% on threes (11th) for a 48.5 effective field goal percentage (10th). The Badgers are right around league-average in offensive rebounding rate (28.6%) and free throw rate (32.5%).

The Badgers like to slow the game down to a crawl, averaging just 63.8 possessions per league game, and that should make it difficult for Michigan to create any sort of easy transition opportunities.

This Wisconsin team is on track to be the worst defensive team in the program since 2010-11 and is allowing 1.08 points per possession in league games. The Badgers are allowing a 51.8 eFG% in conference play, mostly due to their inability to defend inside the arc. Big Ten foes are shooting 52.1% on two-pointers against Wisconsin, third-worst in the league. While Wisconsin has struggled to defend inside, it still does a good job defending the three. Michigan is the only team in the conference to allow a smaller ratio of 3-point attempts and teams are shooting just 34.1% from beyond the arc.

Happ has one of the more unique skillsets that you’ll see in college basketball. He’s great playing in the post with an uncanny ability to drive the ball from the perimeter into his post-up moves with an array of finishes around the rim. He also passes the ball like a point guard. He’s ranked 2nd in the league in assist rate, trailing only Cassius Winston, and he’s the only Big Ten player over 6-foot-5 in the top 17 spots in that statistic. Happ also has incredibly quick hands on defense and is ranked 4th in the conference in steal rate in league play and he can be very disruptive on that end of the floor.

And then there’s the shooting, Happ shoots almost entirely within a few feet of the basket. He’s just 1-of-10 on 3-point attempts this year (he didn’t attempt one in his first two years at Wisconsin) and his shot chart tells the story. 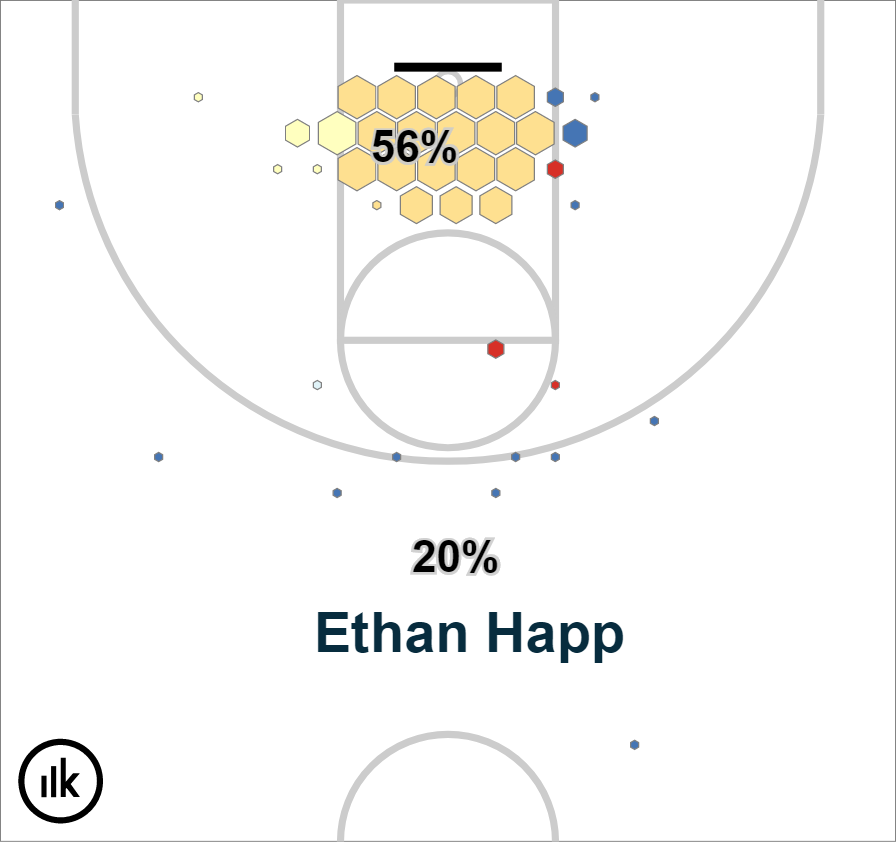 6-foot-3 freshman Brad Davison starts at the point guard. He’s not the most efficient offensive player — 46% on twos, 36% on threes, elevated turnover rate — but he’s a high volume player who will take and make tough shots for a Badger team that lacks depth. Davison is a good defender and a tough kid who is known for taking charges. He’s also been playing most of the year with an injured shoulder.

Sophomore guard Brevin Pritzl attempts over half of his shots from deep, but is connecting at just a 33% clip from deep. Pritzl’s volume speaks to the fact that he clearly has a green light and still has to be ran off the line.

6-foot-5 junior Khalil Iverson provides athleticism and rebounding on the wing. Iverson is a strong offensive rebounder and defender who does a great job of getting to the free throw line. His offensive ability is limited — he’s just 0-of-21 on 3-point attempts — but he provides toughness and physicality at the position.

6-foot-8 freshman Aleem Ford is the best 3-point shooter in the Badger rotation. He’s making 47% of his 3-point attempts and 72% of his shot attempts are from deep. He’s not a threat to do much more, but is the one deadly 3-point threat to track.

Nate Reuvers provides size, shot blocking and rebounding at the four spot. The 6-foot-10, 215 pound freshman is shooting 43% on twos and 31% on threes.

KenPom likes Michigan by a final score of 62-60, giving the Wolverines a 56% chance at the road victory. This is one that Michigan would love to have in the win column as it looks to snap a three-game road losing streak. Winning at the Kohl Center has never been easy for the Wolverines, but there won’t be many better opportunities than facing this year’s Wiscosnin team.