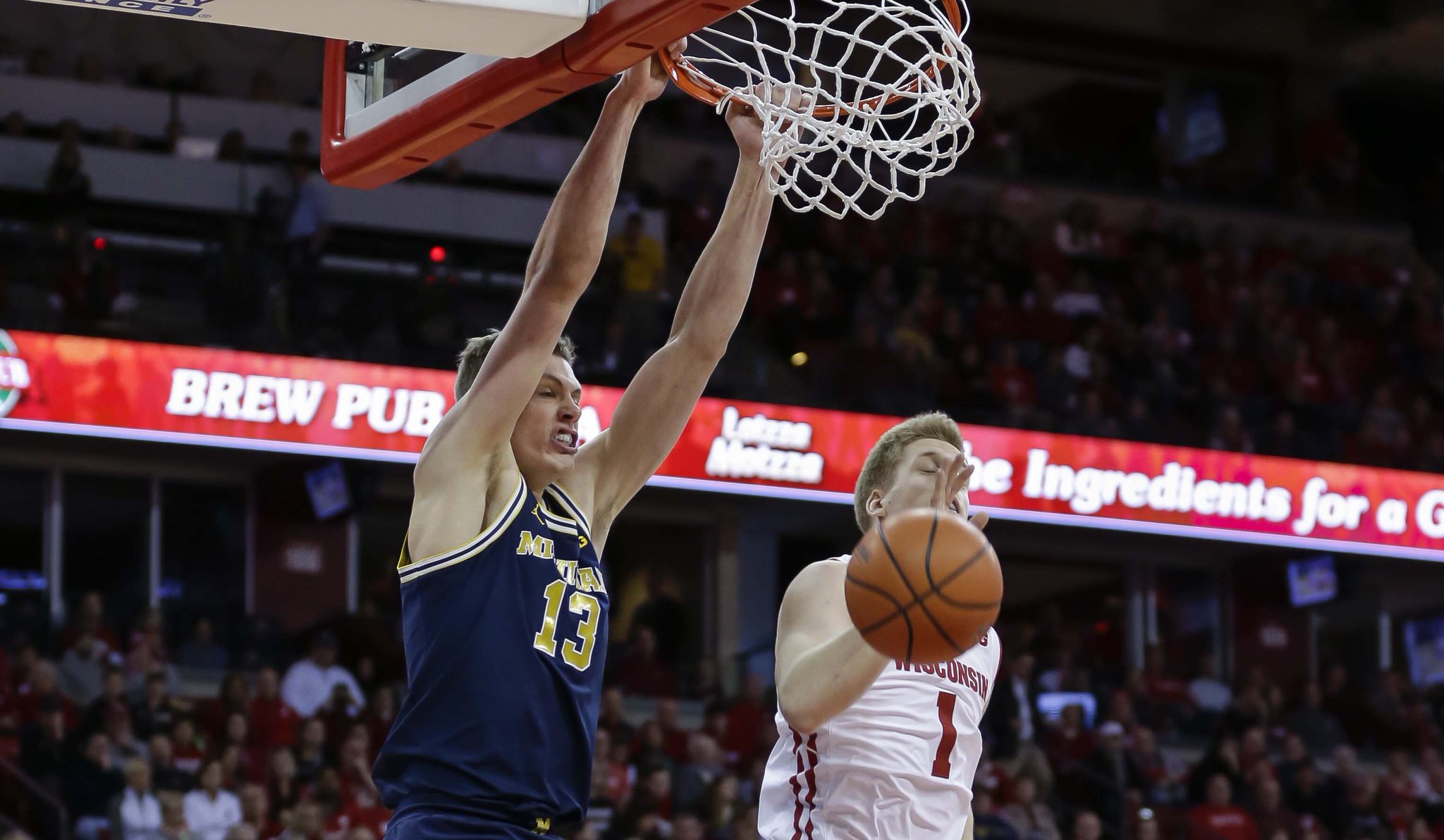 Michigan picked up a bounce back win at Wisconsin on Sunday afternoon, playing its second-best offensive game of the conference season.

Michigan picked up a bounce back win at Wisconsin on Sunday afternoon, playing its second-best offensive game of the conference season.

The Wolverines scorched the nets early, making eight 3-pointers in the first half, and went to the break with a 22-point lead. That hot shooting cooled off in the second and the Badgers heated up. Ethan Happ poured in 18 second half points to cut the lead to 11 points on several occasions.

Muhammad-Ali Abdur-Rahkman had just enough answers down the stretch to help the Wolverines escape with their fourth road win of the year.

The Wolverines were without Isaiah Livers (ankle) and didn’t play Eli Brooks, but 10 different players saw the court and nine of them scored. Moritz Wagner (20 points), Duncan Robinson (16 points) and Muhammad-Ali Abdur-Rahkman (15 points) led the way in a balance scoring effort. 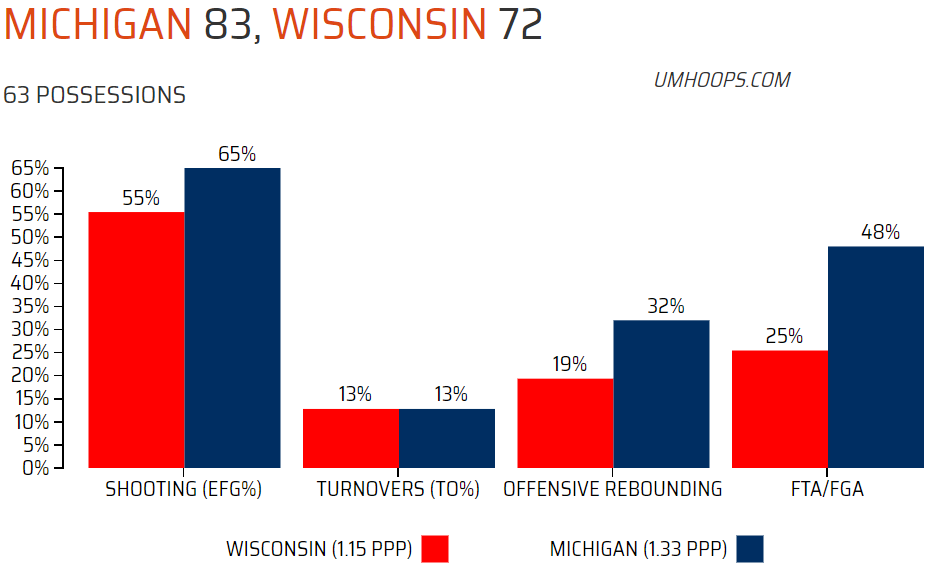 Michigan shot 63% on twos and 45% on threes in its best shooting performance since the offensive explosion in West Lafayette. The 19-of-30 shooting inside the arc speaks to how well the Wolverine offense was clicking. Some of that action was downhill driving to the basket, but a lot of it was open cuts and ball screen assists for dunks and layups. The Badgers have struggled defensively this season, but Michigan did a great job of attacking advantages and exploiting their athleticism on the wings.

The Wolverines scored 1.33 points per possession which marks the worst defensive performance of the season by the Badgers. They have a struggling defense, but that is an elite offensive game by a team that hasn’t had many of them as late. Now the question is whether that strong offensive play can carry over and become consistent. Michigan has played its two best offensive games of the season over the last seven games, scoring over 1.3 points per possession against Purdue and Wisconsin. But the Wolverines managed to score just 300 points in 310 possessions (.97 PPP) in the other five games that surround those two offensive explosions.

The truth is always supposed to lie somehwere in the middle, but this offense has been feast or famine for quite a while now.

We saw a few interesting tweaks in this game including a rare sighting of two big men on the floor at the same time. The move stemmed from Wisconsin’s personnel and the fact that Livers was sidelined with an ankle injury. Beilein rode with that Wagner-Teske combination for three minutes in the first half and Michigan outscored the Badgers 7-6,

Michigan’s defense was as great in the first half (.79 points per possession allowed) as it was bad in the second half (1.42 points per possession allowed). That boils down to Happ being more efficient — he was 5-of-13 in the first and 7-of-10 in the second — and a couple of timely Badger threes falling.  I thought the U-M defense did its best job against Happ when it didn’t double, but it is hard to praise an individual defensive performance when a guy goes for 29 points. The Wolverines’ effort on the defensive glass continued to be important as Wisconsin only rebounded 19% of its misses and Happ only grabbed a single offensive board.

This was one of those road games that Michigan just had to have to round out some of the bullet points on its resume and it got the job done. Wednesday’s home game against Iowa should be in the same boat before a difficult closing stretch vs. Ohio State and on the road at Penn State and Maryland. 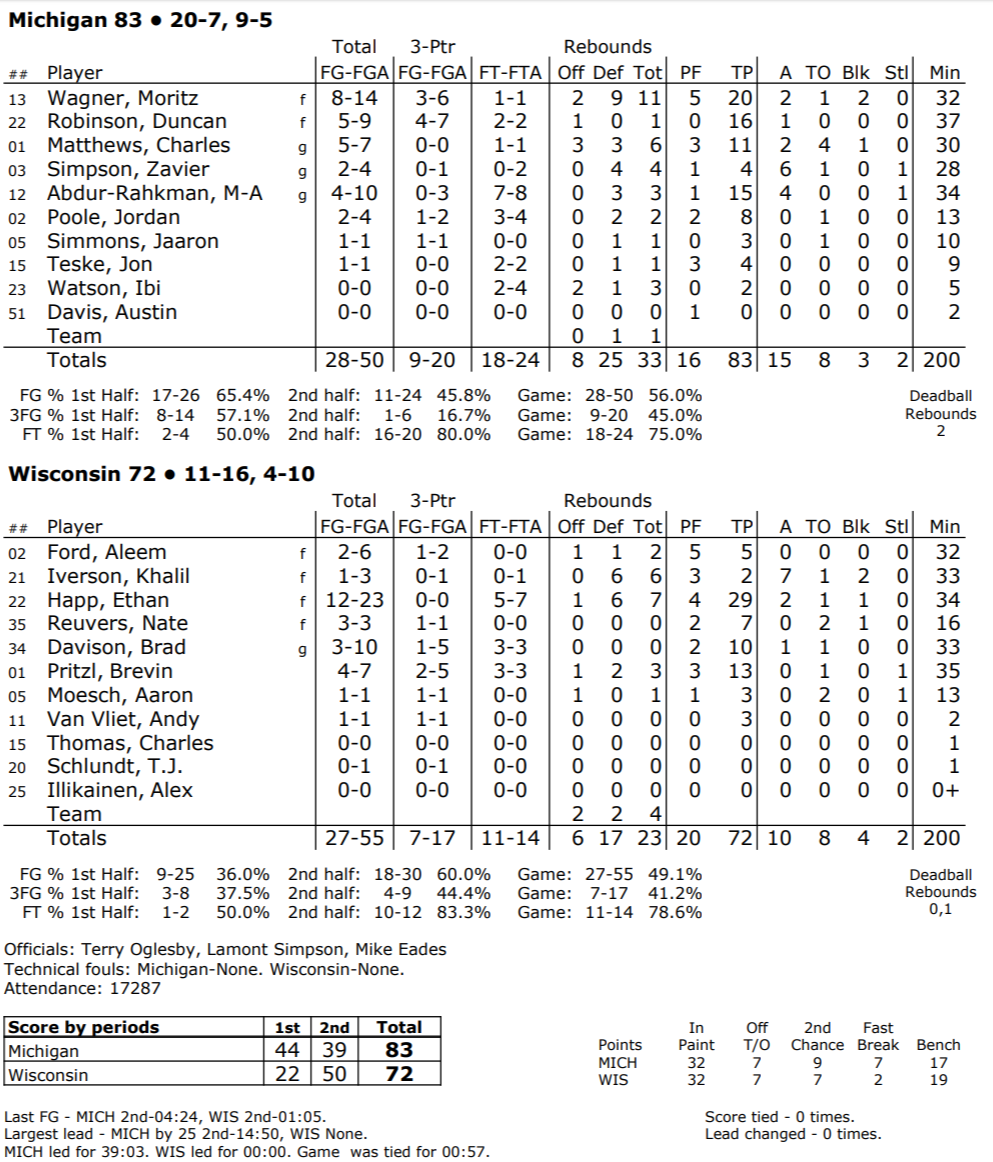