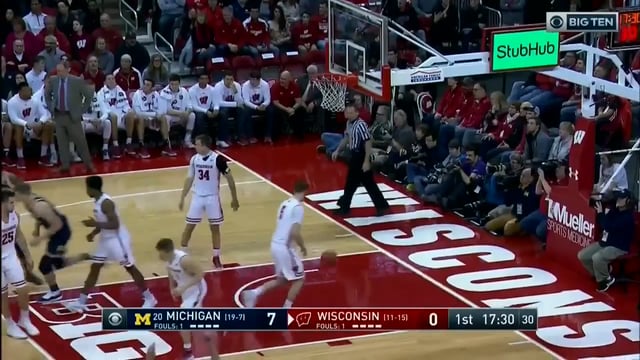 Here are Five Key Plays from Michigan’s 83-72 win over Wisconsin.

For just the second time in 11 years, John Beilein and Michigan left the Kohl Center with a win over Wisconsin. The Wolverines got out to a hot start, with Duncan Robinson filling in capably for an injured Isaiah Livers, and doubled up the Badgers by halftime.

There were some shaky moments in the second half that may have reminded some viewers of Michigan’s collapse at Ohio State earlier this season, but some key plays down the stretch allowed the Wolverines to escape somewhat comfortably. Here are Five Key Plays from Michigan’s 83-72 win over Wisconsin.

Despite some recent shooting struggles, Michigan came out firing early in this one. After missing their first attempt of the game, the Wolverines made their next four 3-point attempts, courtesy of Duncan Robinson, Jordan Poole, Moritz Wagner and Jaaron Simmons.

The early barrage helped Michigan stretch its lead to as large as 14 — a lead that the Wolverines would only extend before the end of the half, and never lose throughout the game.

Though he’s currently shooting the worst he has over the course of his career at Michigan, Robinson took full advantage of his insertion into the starting lineup. The fifth-year senior forward hit 4-of-5 attempts from beyond the arc in the first half, with his only miss taking place as the half came to a close. Two of his 3s came during a crucial stretch in which the Wolverines scored on four consecutive possessions to take an 18-point lead into the second TV timeout.

Perhaps most importantly, Robinson’s willingness to shoot showed he hasn’t lost confidence, even if he has struggled shooting the ball recently. On a team that lacks 3-point shooting when compared to previous John Beilein teams, Robinson’s role as a shooter — whether he’s coming off the bench or trotting out with the starting five — will be important.

“Duncan’s a great shooter, and we know that,” said junior forward Moritz Wagner, “so I’m very happy his shots were going down.”

When the Badgers did make a run, cutting Michigan’s lead from 23 to 13 with a 10-0 spurt thanks to the efforts of Nathan Reuvers and Ethan Happ, the Wolverines were quick to answer and prevent the situation from getting too dire.

Senior guard Muhammad-Ali Abdur-Rahkman contributed on three crucial possessions after the Badgers had cut the deficit to just 11 points.

With 8:36 to play, he hit a layup in response to a Brevin Pritzl jumper that broke a scoreless streak of nearly four minutes. Then, after Happ scored on the ensuing possession, Abdur-Rahkman found Wagner for a dunk. His jumper with 5:54 left capped off an impressive stretch of play from Abdur-Rahkman, who finished with 15 points — including plenty of free throws down the stretch.

There’s been plenty of debate regarding who Michigan’s ball screen alpha guard should be during critical moments and this was Abdur-Rahkman’s moment with all three buckets coming out of pick-and-roll action with Moritz Wagner.

Next up, it was Zavier Simpson’s chance to make a critical play. The Badgers had the ball down by 11 points again and had Simpson switched onto Khalil Iverson in the post. Despite giving up 5 inches and 25 pounds, Simpson managed to steal the entry pass and trigger a fastbreak where he found Charles Matthews for a layup.

Simpson would struggle down the stretch and forced John Beilein to pull him from the game with 2 minutes remaining after missing the front-end of a one-and-one on back-to-back possessions after being intentionally fouled. But this defensive play is a great example of why the decision to take him off the floor late in games is difficult: he’s one of the most solid and disruptive defenders on the roster.

In the grand scheme of things, a tipped ball after a missed free throw might not seem like the most important play. And in the context of Michigan’s win, it very likely wasn’t the most important play. But the tap out was still a huge play, giving the Wolverines a chance to breathe as the Badgers made one last-ditch effort to close the gap. After Aleem Ford drained a 3 to cut Michigan’s lead to eight, the Badgers fouled Zavier Simpson, sending the 49 percent free-throw shooter to the line for a one-and-one.

It was a prescient decision, as Simpson’s attempt missed. But in the ensuing scrum, the ball was tapped out to Charles Matthews. The Badgers would eventually foul Abdur-Rahkman, who made both of his free throws to extend the lead back to double digits — an act that felt like slamming the door shut on any chance of a comeback.

“All programs in the Big Ten are really good programs so we know they’re going to make a run late,” Robinson said. “Teams aren’t just going to wilt away. … Fortunately, we were able to get a win in this one, but we’ve got to continue to tighten up our free throw shooting and (stay) connected on defense in those type of situations.”