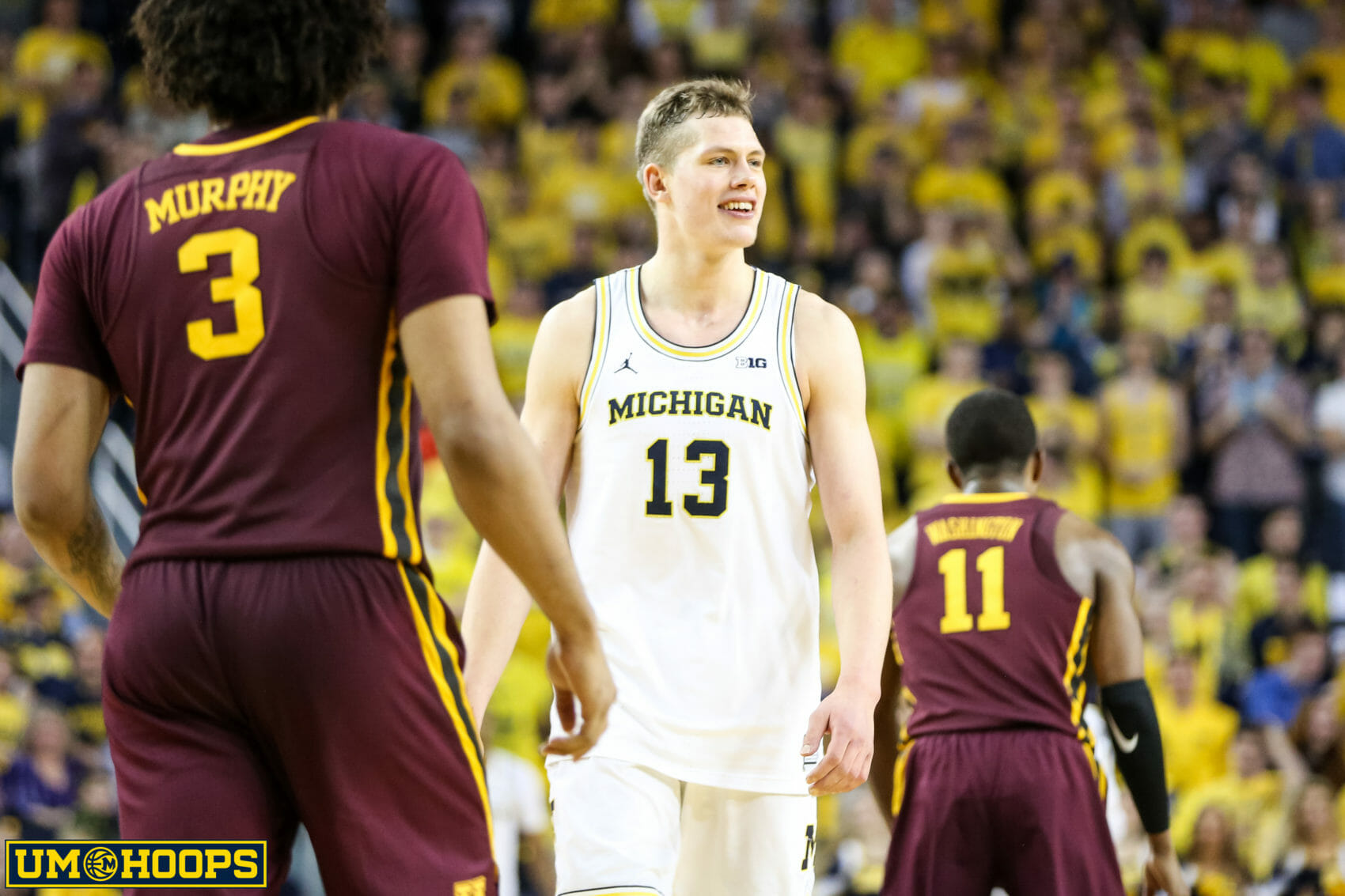 Michigan hosts Iowa tonight as it looks to lock up a winning record in conference play (6:30 p.m., BTN). The Hawkeyes have lost four of their last five games and have only won one road game this season (at Illinois in overtime) as Fran McCaffery limps to finish line in his eighth season.

The Wolverines and Hawkeyes played their first meeting way back on January 2nd, a 7-point Michigan win. Eli Brooks was Michigan’s starting point guard then, but he hasn’t scored in 42 minutes of playing time since. Zavier Simpson (he’s started every game since) and Isaiah Livers were breakout stars for the Wolverines off the bench, while Iowa entered that game on a 5-game winning streak and has only won 3 games since.

Iowa’s offense checks in at sixth in Big Ten at 1.08 points per possession. The Hawkeyes are the best offensive rebounding team in the league, grabbing 33.2 percent of their misses and also play at the fastest tempo in the conference.

Iowa shoots 50.2 percent on twos (8th) and 38.6 percent on threes (3rd), but attempts the second-fewest percentage of its shots from beyond the arc in the conference. The Hawkeyes have struggled with turnovers at times, giving the ball away on 18.5 percent of offensive possessions, and have also failed to get to the free throw line consistently.

The Iowa offense is unique because of its heavy volume of post-ups and shots off of screens. Only Wisconsin and Purdue use more of their possessions out of the post and only Purdue attempts more shots off of screens than the Hawkeyes. Michigan’s defense struggles to defend both actions, grading out in the 2nd percentile vs. screens and the 6th percentile vs. post-ups. That should pose a defensive challenge for the Wolverines.

There might be some offensive bright spots on Iowa’s offensive resume, but there aren’t any on defense. The Hawkeyes are on pace to have the worst Big Ten defense in the KenPom era, allowing 1.19 points per possession in league games.

Iowa struggles to defend ball screens or in transition and has been abused from 3-point range this season. Big Ten teams are shooting 42.2 percent from three against the Hawkeyes, worst in the league, and they are also making 54.6 percent of their twos (13th) for a 57.6 eFG% (14th). Iowa has allowed at least 1.2 points per possession in 8 of its last 11 games since it last played Michigan.

6-foot-9 sophomore Tyler Cook is a problem inside and he scored 28 points on 10-of-15 shooting in the first meeting. That was Cook’s best offensive performance of the conference season and Michigan didn’t really have an answer to contain him. The only Big Ten players who have scored more points per game on post ups this season are Isaac Haas and Ethan Happ — that’s impressive company for the Iowa big.

Sophomore point guard Jordan Bohannon is really the only true constant in Iowa’s rotation. He’ll be on the court at almost all times because he’s Iowa’s only reliable lead guard. Bohannon is a knock down 3-point shooter, making 44% of his long range efforts, but Zavier Simpson played a great defensive game against him in the first meeting. It doesn’t take much space for the Iowa guard to get open from three and he has deep range. In his better performances he’s also a great distributor.

Iowa’s primary wing shooters are Isaiah Moss and Maishe Dailey. Moss is shooting 37% on twos and 38% on threes in Big Ten games. He’s 7-of-10 in Iowa’s last two wins, but just has only made more than 1 three in one of Iowa’s conference losses. Dailey is just 9-of-26 from deep in league games, but he hit 3-of-5 3-pointers in a recent game against Michigan State.

Iowa also has an array of guys who are 6-foot-7 or taller and player interchangeable spots in the front court. Along with Cook, expect five or six other players to see minutes up front and who plays more seems to be anyone’s guess.

Big man Luka Garza is skilled around the basket and has been one of the more impressive freshman in the conference. Garza is shooting 59% on twos and will step out and attempt the occasional three (31%). He also grades out in the 93rd percentile nationally as a post-up scorer. He didn’t have a great game against Michigan, but he’s been starting lately and providing productive minutes.

Freshman forward Jack Nunge stretches the floor from the four spot while Ahmad Wagner was inserted into the starting lineup after playing single digit minutes in the last four games.

Wagner replaced Nicholas Baer, a 6-foot-7 junior, who is shooting 59% on twos and 31% on threes. Baer made 40% of his 3-pointers over his first two years at Iowa, but he’s been slumping this season while still attempting over half of his shot attempts from deep. Baer is a versatile defender who rates highly in block and steal percentages.

Cordell Pemsl provides extra size and strength down low, but seemed to struggle while playing heavy minutes at the four to defend Michigan’s four-out offense. Isaiah Livers hit a number of open threes where Pemsl just didn’t help out to the corner to guard his man and take the 3-pointer away.

KenPom projects an 80-69 victory, giving the Wolverines an 83% shot at defending home court. The Wolverines might not have much to gain from the home victory, but it is one of the last chances for a bad loss on the resume that they’ll want to avoid.