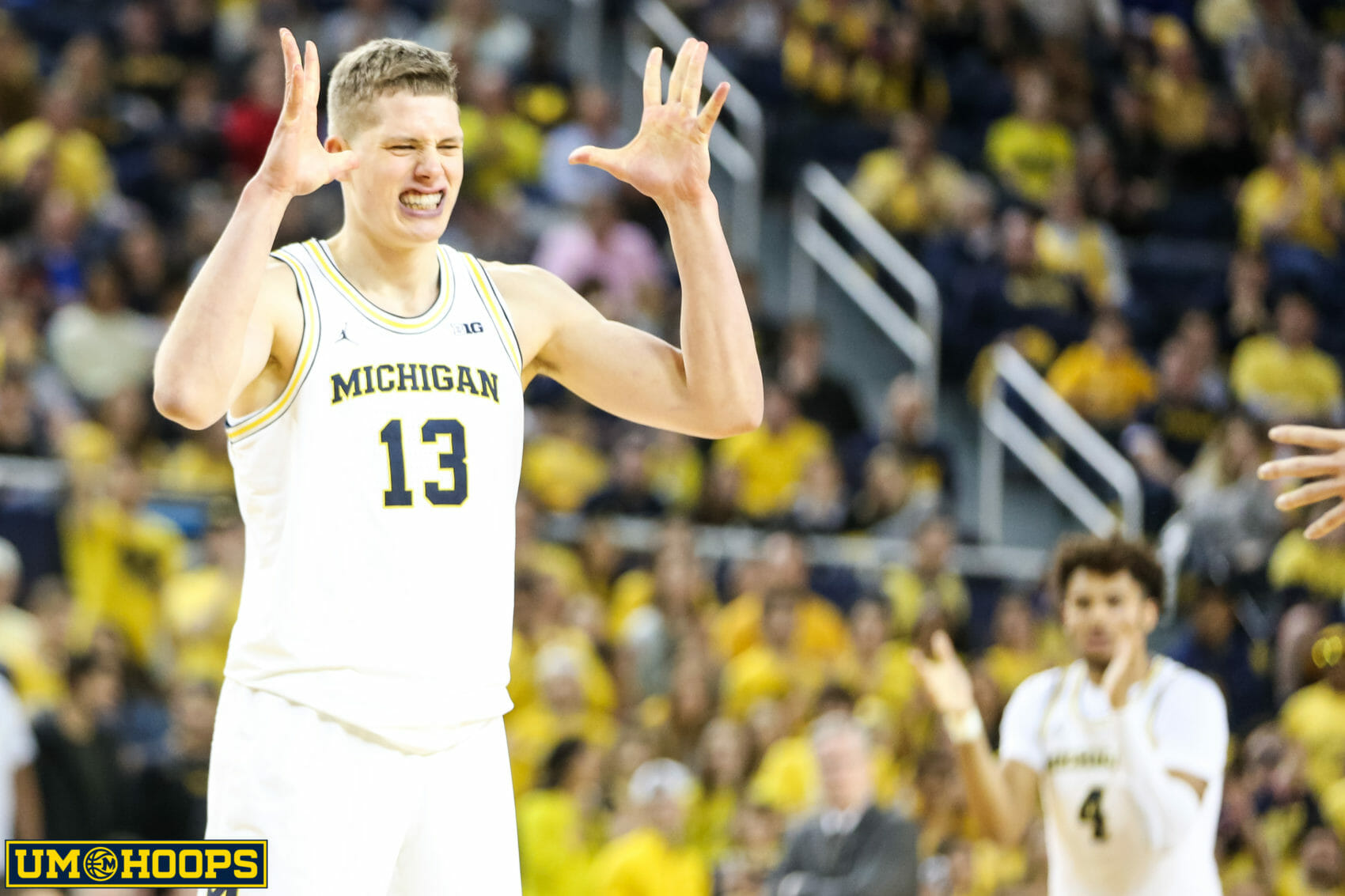 Here are five key plays from Michigan’s 74-59 win over the Hawkeyes.

It wasn’t Senior Day — but Michigan’s trio of seniors still had themselves a day.

Muhammad-Ali Abdur-Rahkman and Duncan Robinson led the team with 18 points apiece, while Jaaron Simmons gave John Beilein some quality minutes off the bench in one of his finest outings of the year.

“Tonight, they saved the day.”

Here are five key plays from Michigan’s 74-59 win over the Hawkeyes.

The Wolverines were somewhat befuddled by Iowa’s version of the 2-3 zone that has flummoxed Michigan in recent weeks, as the Hawkeyes scored the first seven points of the game and jumped out to an early 9-2 lead.

But it wasn’t long before the Wolverines started figuring things out on offense. In his return to the court, Isaiah Livers hit a triple, before Simmons hit another from the top of the key to trim Michigan’s deficit to one at the first media timeout. Then Moritz Wagner had a clean finish down low and Abdur-Rahkman pulled a fast one on Iowa, stealing the inbounds pass and laying it in to give his team its first lead of the game at 12-11.

Michigan’s second big run of the first half was galvanized by Abdur-Rahkman, who stole the ball, attacked in transition and found Robinson trailing for an open 3 with just over eight minutes left. Then on the ensuing possession, Abdur-Rahkman found Robinson for another 3, just one of his team-leading seven assists on the day.

“(Abdur-Rahkman) is really careful with what he does,” Beilein said, “and is not afraid to make the extra pass.”

Less than a minute later, Charles Matthews would knife through the defense and dunk to give his team a nine-point lead, its largest of the game up to that point, at the under-10 media timeout.

After a decent first half, Robinson heated up quickly in the second frame. Between 11:41 and 10:01, the fifth-year senior forward hit 3s on three consecutive trips down the floor, handing his team the largest lead of the day. Robinson has been playing with much greater confidence lately, and though Livers made his return to the starting lineup, Robinson played five more minutes coming off the bench — 26 to 21 — and was responsible for hitting half of his team’s total 3s.

Perhaps unexpectedly, Robinson played quality defense on Iowa forward Tyler Cook, playing a big role in limiting the talented sophomore to just 10 points on 4-of-9 shooting. Robinson even found a spot as the ‘3’ alongside Livers in a lineup that hasn’t been seen all that often this year.

“I’m glad he’s getting back to his old self,” Abdur-Rahkman said, “and playing with the same confidence he had before.

“… We have a couple shooters on our team. But no one like Duncan, one of the best in the country. When he’s hot like that, it adds a different dynamic and a different look for teams to try to guard, and helps open up a lot of things for other people.”

For much of the latter part of the second half, play was characterized by the two teams trading baskets and going back and forth. Michigan didn’t extend its lead too much past 14 or 16, yet never let it dwindle too low. And with just under seven minutes to go, the Wolverines thwarted a comeback attempt that began with an and-one from Cook.

On the following possession, Zavier Simpson missed a 3 from the corner, but Jon Teske had good position and recovered the ball, finding Abdur-Rahkman for an open 3. This time, Michigan would not miss; the shot stretched the lead back to 16. And on the possession after that, Teske was in the right place at the right time, putting back a Charles Matthews miss at the rim.

Again, Iowa tried to go on another run to cut into Michigan’s lead. The Hawkeyes tallied five points in quick succession to the Wolverines’ zero; Michigan, though, quickly slammed the door shut. First Simpson found Matthews down low for a dunk.

Then Teske scored through contact and a foul, capping off a nice four-point performance in which the sophomore center went 2-of-4 from the field with 8 rebounds — three offensive, five defensive — three steals, and one assist.

Teske made a positive impact in most facets of the game Wednesday night, and even drew praise from Beilein after the game for an outlet pass he made.