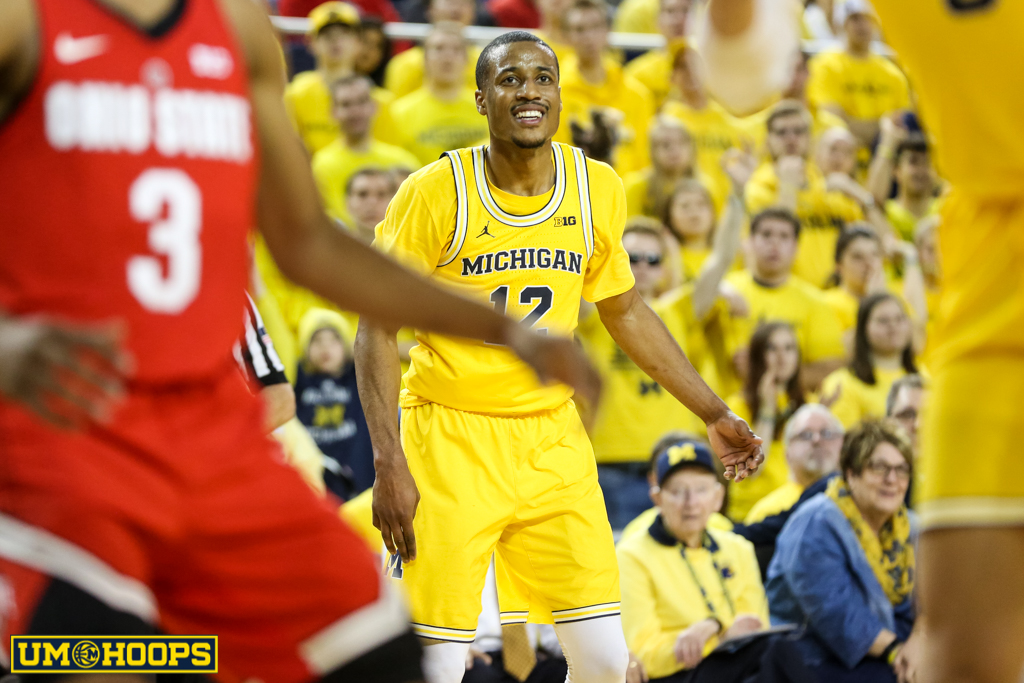 Over three months ago, Michigan blew a 20-point lead at Value City Arena and lost to Ohio State. On Sunday (1:00 p.m. CBS), the Wolverines will have a chance to avenge their collapse.

The game felt like a bad loss, mostly because the general public thought that Ohio State wasn’t very good. It is still a bad loss, because any blown 20-point lead is a bad loss, but now that the rematch has rolled around the stakes are different. Ohio State has lost just three times since that game — to North Carolina and twice to Penn State — and sits tied at the top of the conference standings with one week to play.

The Buckeyes are good and they have the conference’s player of the year. They beat Michigan State and won at Purdue and are heading to Ann Arbor with plans to defend their share of the conference lead in the final week of the season.

Ohio State has the No. 3 offense in the Big Ten at 1.14 points per possession. The strength of the Buckeye offense is its ability to score inside the arc. The Buckeyes lead the Big Ten with a 56.4 2-point shooting percentage and attempt the third-most 2-pointers in the conference. The Buckeyes don’t shoot many threes and are just average at 35.3%, but their ability to attack inside has won them games. The Buckeyes are just 3-4 when they shoot worse than 50% on twos and 19-2 when they top that mark.

The Buckeyes aren’t a great offensive rebounding team (8th in the conference), but haven’t had many issues with turnovers (4th) either. They get to the free throw line at a fairly average rate, especially considering their dependence on 2-point shooting. Ohio State has also struggled against zone defenses this season, grading out in the 41st percentile, per Synergy, which could present an interesting opportunity for Michigan to roll out the zone defense it has been experimenting with lately.

Ohio State ranks 2nd in the Big Ten defensively, allowing .984 points per possession. The formula for defensive success is simple: 2-point defense and solid defensive rebounding. Big Ten teams are shooting just 44.6% on twos (2nd) against the Buckeyes, who rebound 86.3% of their opponents’ misses (2nd). Where Ohio State has been vulnerable defensively is on the perimeter. The Buckeyes give up the highest ratio of 3-point attempts to shot attempts in the conference (39.4%) and opponents are shooting 34.8% on threes.

The scouting report starts with junior forward, and likely Big Ten Player of the Year, Keita Bates-Diop. Bates-Diop has had a breakout year and is one of the most complete all-around scorers in the conference if not the country.

Bates-Diop can get the ball in the basket any number of ways. He’s effective spotting up or in transition, but he can also play as a roll/pop man in the ball screen game or post-up against smaller defenders. He also excels making the tough twos that most defenses are designed to allow, hitting mid-range jumpers at an impressive 52% clip.

Junior point guard CJ Jackson is one of the more improved players in the conference. Jackson is a 38% 3-point shooter on the year, but he’s also Ohio State’s leading setup man. He’s cut his turnovers this year after a rocky start and does a good job of getting to the line.

Kaleb Wesson ranks 6th in the Big Ten in points per game scored off of post-ups. He’s ahead of players like Nick Ward and Juwan Morgan and is going to be one of the better post-up scorers in the conference and will be for the next several years.

Jae’Sean Tate has been a key cog for the Buckeyes for the last four years. He’s never developed much of a perimeter game, but he’s still one of the more aggressive and imposing combo forwards in the conference. Tate is never short on motor and has taken on an increased playmaking role for the Buckeyes this season. His scoring game still revolves around putting his head down and getting to the basket.

Kam Williams is back from suspension and adds an element of shooting to the Buckeye rotation. Williams is one of the better shooters in the conference and is great shooting off the catch from 3-point range or off the dribble in the mid-range. He rarely gets all the way to the rim, but his 2-point shooting numbers are still impressive because of his dynamic mid-range game.

Sophomore guard Andre Wesson starts on the wing for Chris Holtmann. He hit three huge 3-pointers at Purdue, but is just 13-of-46 from deep on the season. He’s the weakest offensive cog in the Buckeye rotation.

Former Michigan walk-on Andrew Dakich continues to play significant rotation minutes for the Buckeyes. Dakich uses a minuscule 11.1% of offensive possessions, but has proven that he can move the ball and hit open jumpers (48% on threes) if left open.

Micah Potter and Kyle Young provide depth down low. Both players are likely to be used more often in Ohio State’s switching lineups at the five because they are a bit more mobile, Young especially, than a lineup with Wesson at the five. They aren’t as dynamic of offensive threats, but are capable finishing around the rim.

Musa Jallow, an early enrollee freshman, is a defensive piece on the wing at 6-foot-5, 200 pounds. He’s shooting just 26% on threes, but hit three critical triples at Purdue.

Penn State is the only league team to beat Ohio State, but the Buckeyes look far more mortal after a 23-point road loss at State College. KenPom likes the Wolverines by a score of 66-65, giving them a 56% chance at finishing the season with just one home loss.