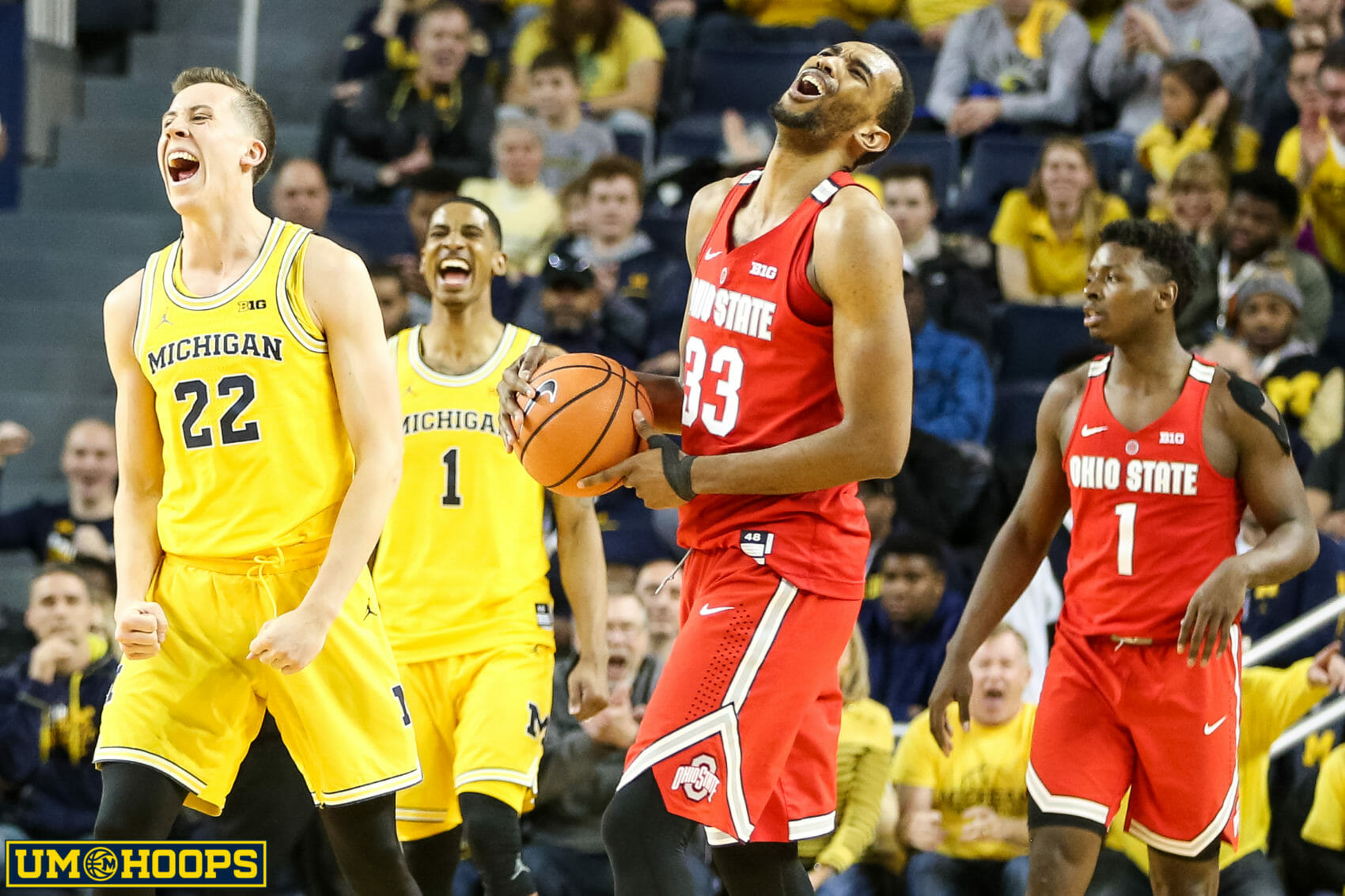 Michigan’s fifth-year senior forward has a well-earned reputation as a sharpshooter. The Wolverines are known for their complex and well-oiled offenses.

Perceptions can change quickly, though. Michigan is nearly through a season in which it has put up the best defensive numbers of any John Beilein-coached team.

Robinson has not made a leap so tangible — yet. It’s clear that he’s trying, from his efforts in both the Wolverines’ 74-62 win over No. 8 Ohio State and their win over Iowa earlier this week — games in which the only adjective that could be used to describe Robinson’s defense is ‘good.’

Against the Buckeyes, he had just four total points on 0-of-3 shooting. Yet he spent large portions of the game blanketing Keita Bates-Diop, the likely Big Ten Player of the Year. Bates-Diop averages 19.6 points per game on 50.4 percent shooting. Against Robinson and the Wolverines, he shot just 5-of-17, struggling to an inefficient 17 points.

It was perhaps the first game of Robinson’s career from which it could be said that he was a significant net positive even with a quiet night on offense. Robinson’s effectiveness against Bates-Diop certainly wasn’t lost upon his coach.

“You take a guy like Duncan Robinson, okay, he’s known … he’s gonna hit some 3s,” Beilein said. “He should be known for the job he did on Diop. And he was absolutely terrific.

“He and Isaiah Livers, just, did they shut him down? No. But they changed the momentum of the game when they took the top scorer in the league and marginalized him a little bit.”

Robinson’s turnaround is almost too perfect in how emblematic it is of Michigan’s newfound defensive success. Muhammad-Ali Abdur-Rahkman doesn’t think there have been any fundamental changes in Robinson’s technique and how he guards players like Bates-Diop or Iowa’s Tyler Cook.

In the context of Beilein’s comments after the game, Abdur-Rahkman’s assertion makes perfect sense.

Beilein admitted — with what he called ‘embarrassment’ — that earlier in his career, he was “so much” more into the scheme and technique of his defense. But his attitude has changed over time, and so has his team’s.

“There’s a care level and a want-to in defense that I think my assistants have gradually worked with our team and get to that point, and it’s gotten better and better every game — every year,” Beilein said. “… I think much more it’s now, ‘You’ve got that guy. It’s a personal battle. Who’s going to win?’ And I think we’ve taken that on.”

So Robinson’s a prime example of Michigan’s new defensive methodology. He’ll never be the most athletic, brawniest, or quickest defender. But he has the will and want to that he perhaps didn’t at an earlier point in his career. And that has made a big difference.

“He’s challenged himself, and we’ve challenged him to say, ‘You can do this,’ ” Beilein said. “This is not a matter of a ‘They’re picking on me,’ type of attitude, which they do. You look at him out there, you watch his athleticism and you say, ‘We’re going to attack that guy.’ That was the  on him for three years, attack him, and he sort of took that challenge on this year.”

According to Zavier Simpson, part of Robinson’s improvement on defense is due to playing with more fire. The sophomore point guard said after the game that he had a conversation with Robinson about a week ago in which Simpson told Robinson to show expression on the court.

“As you can see, his defense is contagious,” Simpson said. “Once we see Duncan playing defense, or anybody playing defense, it just rubs off. And we’re glad to see that from Duncan. He’ll keep it up.”

Robinson appears to have taken Simpson’s advice to heart. With the game winding down, Bates-Diop was called for an offensive foul after running into Robinson. Bates-Diop threw his arms up in frustration, in disbelief at the call. Robinson, meanwhile, turned to his teammates and the crowd and — as Simpson called it — showed expression.

It was only one of many instances of good defense from Robinson, in a performance that elicited a quote from his coach that many might have had a hard time believing just a few months ago.

“… He did a wonderful job on him, and that’s been a good reason why we’ve had success in February is Duncan Robinson’s defense,” Beilein said. “Not his threes, his defense.”