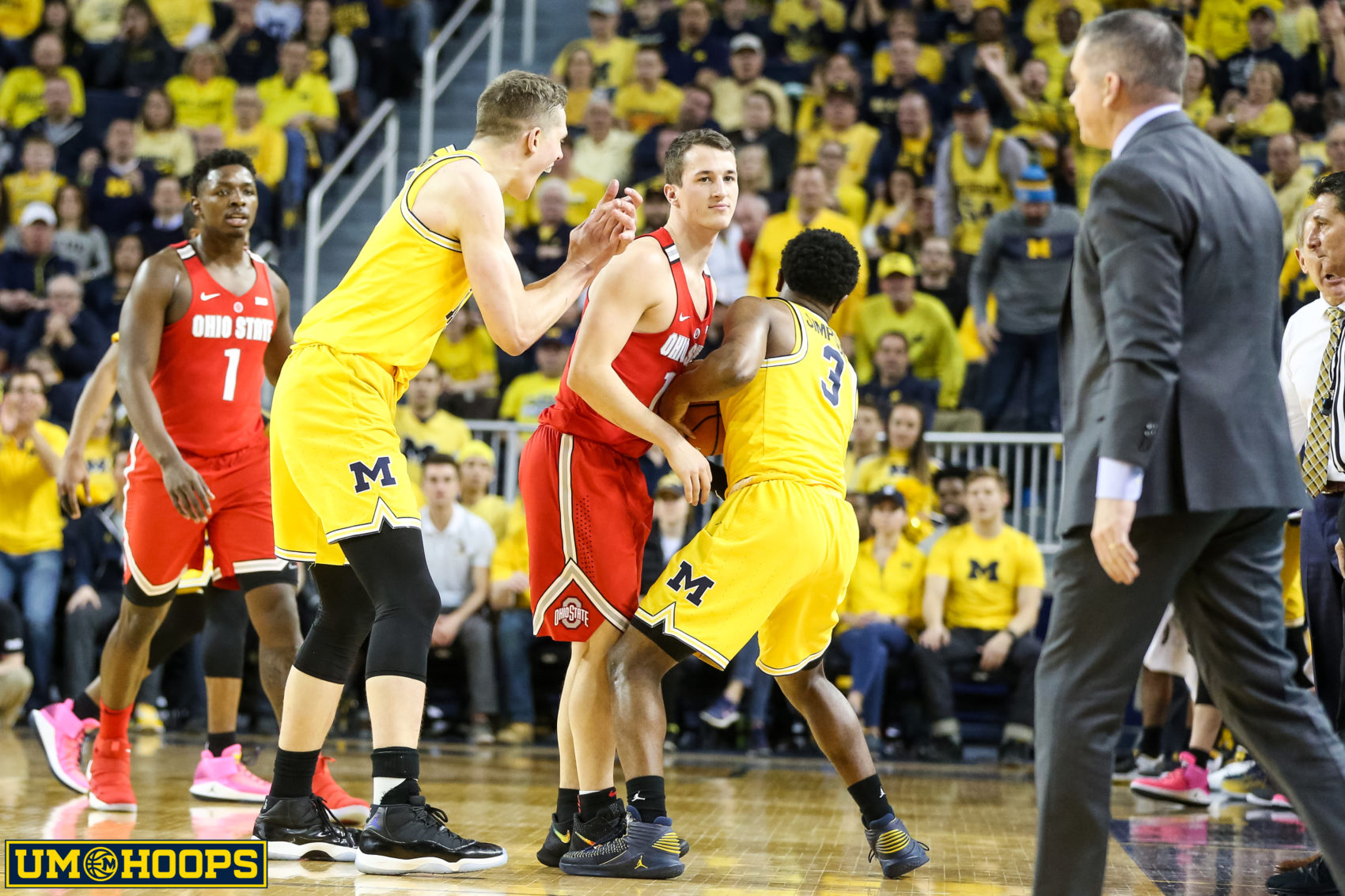 Zavier Simpson gets the best of C.J. Jackson

Simpson’s defense was a highlight of this game. He badgered C.J. Jackson into oblivion, notching two steals and forcing a handful of turnovers that didn’t get counted on the stat-sheet. Jackson finished with just three points — a season low — on one-for-five shooting without an assist. That was all Simpson.

And, though Simpson’s rebounding isn’t particularly notable, the sophomore’s effort on a long defensive board helped seal the game. He managed to split the reach of two Ohio State players and tap it out to Wagner, who promptly finished an and-one in transition.

On the other end, Simpson knocked in 13 points, helping catalyze Michigan’s transition game and hitting a 3-pointer when the Buckeyes helped off him in the corner.

“(Coach Beilein) just basically just tells me to run the team on the offensive end,” Simpson said. “Get two feet in the lane, find players, besides that, if I don’t have none, just knock down shots or take it to the rim.”

He also broke out a new routine at the free throw line, with some success.  At the suggestion of John Beilein, Simpson started looking to his right prior to taking his foul shots. Four-for-six from the line isn’t much to brag about, but it’s one of the better games Simpson has had of late.

Beilein suggested the change at the behest of his son, Patrick.

“(Patrick) called me, he said, ‘Put more off his shoulder. He needs to go off his shoulder. And so, do it like you did to Scott Unger at Richmond,’ ” Beilein said. “… So we did it. And he went 4-for-6, I’m not taking the credit, he practiced like crazy the last couple days.”

If Simpson’s free throw shooting is good enough that he can simply be on the floor at the end of games without worry, he’s suddenly a huge asset in those situations. He proved as much today.

Robinson didn’t find his shooting touch, scoring just four points and failing to hit a field goal. And it didn’t matter one bit.

The fifth-year senior — along with Isaiah Livers — held Keita Bates-Diop to an abysmal 5-of-17 shooting performance. Though Bates-Diop still managed to put in 17 points, he never got in rhythm, turning it over four times in addition to the poor shooting.

“You take a guy like Duncan Robinson, okay, he’s known, well it’s Senior Night. He’s gonna hit some 3s,” Beilein said. “He should be known for the job he did on Diop. And he was absolutely terrific. He and Isaiah Livers, just, did they shut him down? No. But they changed the momentum of the game when they took the top scorer in the league and marginalized him a little bit.”

It’s worth noting just how important it is that he can play so well without shooting. That sentence didn’t apply to Robinson in December, or really even January. On Sunday, he held Bates-Diop — arguably the favorite for Big Ten Player of the Year — to an 80 offensive rating, one of his five lowest marks of the year.

“One thing with (Bates-)Diop was if he can’t get the ball, it’s really hard for him to attack,” Beilein said. “If he gets it, make him a multi-dribble player. But he did a wonderful job on him, and that’s been a good reason why we’ve had success in February is Duncan Robinson’s defense. Not his threes, his defense.”

If Robinson can shoot on a given day, it raises Michigan’s ceiling — perhaps infinitely so. But the Wolverines can thrive even without that. That’s thanks in part to Livers’ emergence, but Robinson’s defense was vital on Sunday and will be going forward.

If Poole is feeling it, you know right away.

On Sunday, he hesitated, then took a 3-pointer off the catch as his first shot. It fell through, and so began the Jordan Poole Show.

A couple minutes later, he finished in transition with a swim move to get around the defender. Then he stopped on a dime, crossed over Kam Williams, pulled up from beyond the arc and nailed it, setting up a four-point play. By the end of the first half, Poole had scored 12 points in 11 minutes, helping light up a Crisler Center crowd that was waiting for something to get excited about.

Even after a quiet second half, Poole finished an absurd four-of-five from 3-point land. By offensive rating, it was his best performance since the loss at Purdue.

“We know (Poole’s) gonna shoot it, right? You know it and I know it,” Beilein said. “We’re trying to find and understand what the best way for him to score, not just shoot. And he’s learning that every day. But I just — I love that he’s got that swag to go in there. We talked last week and I suggested that he work a little bit harder on his own time or in extra time in practice, of just getting good, solid reps up. And just trying to just get enough reps in so he felt more comfortable in games.”

Playing well when the first shot doesn’t fall is the next step for Poole and Sunday, of course, gave no indication on that front. But it was a reminder that, when things are going, Poole is a force to be reckoned with.

Michigan has cemented itself as a defensive team already, but its done so without forcing an especially high number of turnovers. The Wolverines have a 20.2 turnover percentage and, surprisingly, turned the Buckeyes over just 21.2 percent of the time on Sunday. However, Michigan made them count.

The Wolverines scored 22 points off turnovers, making 14 Ohio State miscues feel like 20. Simpson was constantly out in transition, feeding Muhammad-Ali Abdur-Rahkman and Moritz Wagner for easy points as well as getting some of his own. That all started with defense though.

“Coach Luke (Yaklich) has allowed me to do that, even Coach B — last year, I would never imagine myself pressuring someone full-court,” Simpson said. “That’s something Coach Luke and I are trying to slide in, that we need to start doing more often. I feel like it’s working. I feel like when I do that, my energy’s contagious. So I feel like, as a team, we play better defense.”

Michigan’s defense locked down in the second half, holding Ohio State without a field goal for over five minutes at one point, from 8:54 to go in the game until 2:52. As the defense was squeezing the Buckeyes’ necks, the Wolverines extended their lead into double-digits, a stretch that proved decisive.

“We knew the defense could win us the game,” Abdur-Rahkman said. “We knew the offense was going to come, we just had to get stops and force turnovers. That’s what we did.”

Added Beilein: “What I’ve learned over time — and I’m embarrassed to say this — I was so much into technique and things like that. There’s a care level and a want-to in defense that I think my assistants have gradually worked with our team and get to that point, and it’s gotten better and better every game — every year. They realize, all the pretty plays, all the 3-point shooting doesn’t win games. That you’ve got to be able to really defend. Earlier in my coaching career (I was) more into technique and scheme, and I think much more it’s now, ‘You’ve got that guy. It’s a personal battle. Who’s going to win?’ And I think we’ve taken that on.”

Muhammad-Ali Abdur-Rahkman was in his element on Senior Day

It’s fitting that Abdur-Rahkman led the team in scoring on a day where the story was defense.

The senior put up a quiet 17 points and three assists on five-of-13 shooting, helping seal the game by hitting a triple off a Charles Matthews drive-and-kick once Ohio State cut it the lead to single digits with just over three minutes to go. He played strong defense throughout and led the Wolverines with 38 minutes.

Abdur-Rahkman is the only player who could lead the team in scoring on his own Senior Day and have it be somewhat of an afterthought. He’s never sought the spotlight and the spotlight has never found him. Even today, that didn’t change.

“In his first two years, I could count on one hand the plays that I had for him,” Beilein said. “… About a month ago, I looked (up and said), ‘You know, we don’t have enough stuff for Muhammad, right?’ Listen, he’s got ability to get places that other people can’t get to on this team.And we started just doing more with him and giving him much more latitude.”

As Beilein has done that, Abdur-Rahkman has performed in kind. He plays more minutes than anybody else on the team and leads it in both effective field goal percentage and true shooting percentage.

“He’s never gonna be mistaken for this incredible point guard that sees the whole floor, but he makes the next right play,” Beilein said. “Right, he does the next right thing all the way through.”