In the final week of the season, Michigan will play its first and only game against Penn State (7:00 p.m., BTN).

Penn State is one of the hottest teams in the conference right now, winning 6 of its last 8 games including a pair of victories over Ohio State. The Nittany Lions got Josh Reaves back from suspension to jumpstart the streak and haven’t looked back since an upset win in Columbus.

Penn State likely needs to go 2-0 this week, with a Sunday trip to Nebraska still on the schedule, if it is serious about making the NCAA Tournament as a bubble team. Michigan is comfortably in the NCAA Tournament, but has a great opportunity to improve its seeding with a pair of quality road tests this week.

At first glance, Penn State’s tempo-free profile is fairly nondescript. The Nittany Lions are ranked 6th in the Big Ten in points scored and allowed per possession. They are solid on both sides of the ball, but they don’t stand out as great in any one area of the game.

Penn State isn’t ranked better than 5th in any of the Four Factors on either side of the ball, but is ranked 5th in the most important two: effective field goal percentage on offense and defense.

The Nittany Lions also don’t have many obvious weaknesses. They are a good but not great rebounding team on both sides of the floor and turn the ball over on a slightly better than average 17.1% of their offensive possessions. The only weak spot on the resume is Penn State’s tendency to send teams to the free throw line and struggle to get there themselves. PSU is ranked 12th in offensive free throw rate and 11th in defensive free throw rate.

Ranked 49th nationally in adjusted offensive efficiency, this is the best offense that Pat Chambers has coached at State College. Penn State is a good 3-point shooting team, making 37.7% of its threes in league games, but it only attempts 32.7% of its shot attempts from deep (10th). John Beilein uses the term “East coast buckets” to refer to how Penn State likes to play offensively. The Nittany Lions lead the Big Ten in points created out of isolation possessions per game, per Synergy, and the roster is loaded with players who can go one-on-one and create offense.

The Nittany Lions play man-to-man defense on 96.1% of their defensive possessions, per Synergy, but will experiment with the occasional full court press look on 7.1% of defensive possessions. They are only ranked 7th in the league in forced turnover rate, but do have the ability to be disruptive. Penn State is ranked 5th in the conference in steal rate and 2nd in block rate, a reminder of just how much length, athleticism and talent is on this roster.

6-foot-5 sophomore Tony Carr is one of the breakout stars in the league this year. A year ago, he was a high volume inefficient shot-jacker who shot 40% on twos and 32% on threes. This year, he’s increased his usage — using the second-most possessions in Big Ten games — while playing more efficiently. His efficiency has improved because he can hit the 3-point shot. He’s still shooting 40% on twos (37% in Big Ten games), but he’s making 46% of his threes (43% in Big Ten games).

Carr’s 42% shooting within five-feet of the basket stands out as a weakness on his shot chart, and drags his 2-point shooting numbers, but it also just speaks to the sort of player that he is. Carr will consistently be given the ball and asked to get to the basket and make a play. He can get there without fail, but ends up forcing up some difficult shots. 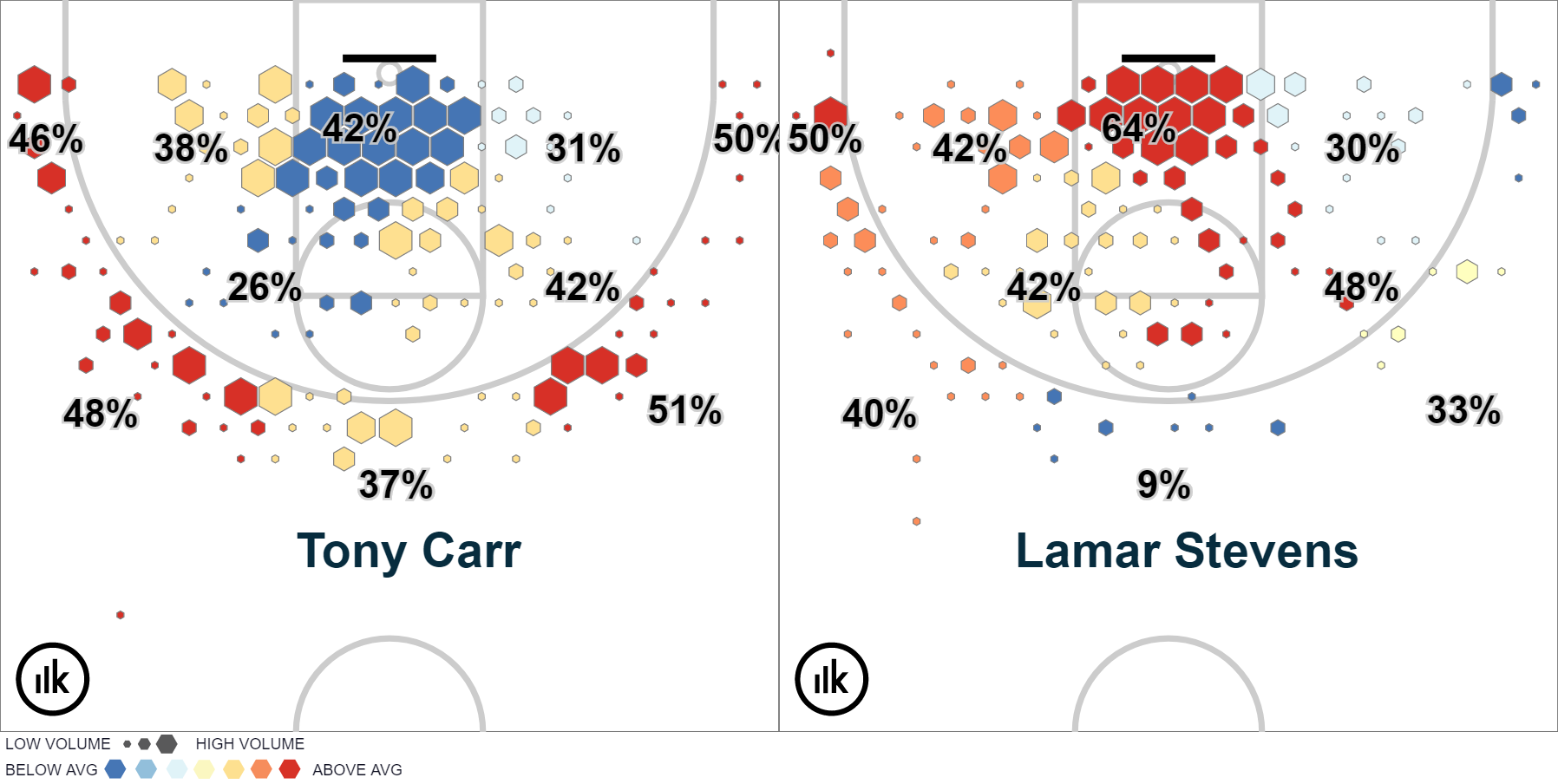 Sophomore forward Lamar Stevens is a talented isolation threat in his own right. The 6-foot-8, 220 pound sophomore is shooting 52% on twos and 29% on threes, but he’s a great finisher and is obviously capable of stepping out and shooting the ball from the perimeter. He loves the mid-range jumper and is ranked 3rd in the Big Ten in isolation points per game, behind Anthony Cowan and Carr.

6-foot-4, 210 pound junior Josh Reaves might be the most important player on the Nittany Lions roster. When Reaves was suspended for academic reasons, the Nittany Lions dropped 3 of 4 games. Since he returned, they have won 6 of 8 with the only losses at Michigan State and at Purdue.

When Reaves is on the floor, Penn State outscores its opponents by .19 points per possession. When he’s off the floor the Nittany Lions outscore opponents by just .03 points per possession. Reaves is a lockdown defender on the wing — ranked 13th nationally in steal rate — and he’s improved dramatically on the offensive end. He’s shooting 61% on twos and 39% on threes this year, two years removed from a 3-of-39 3-point shooting season as a freshman. 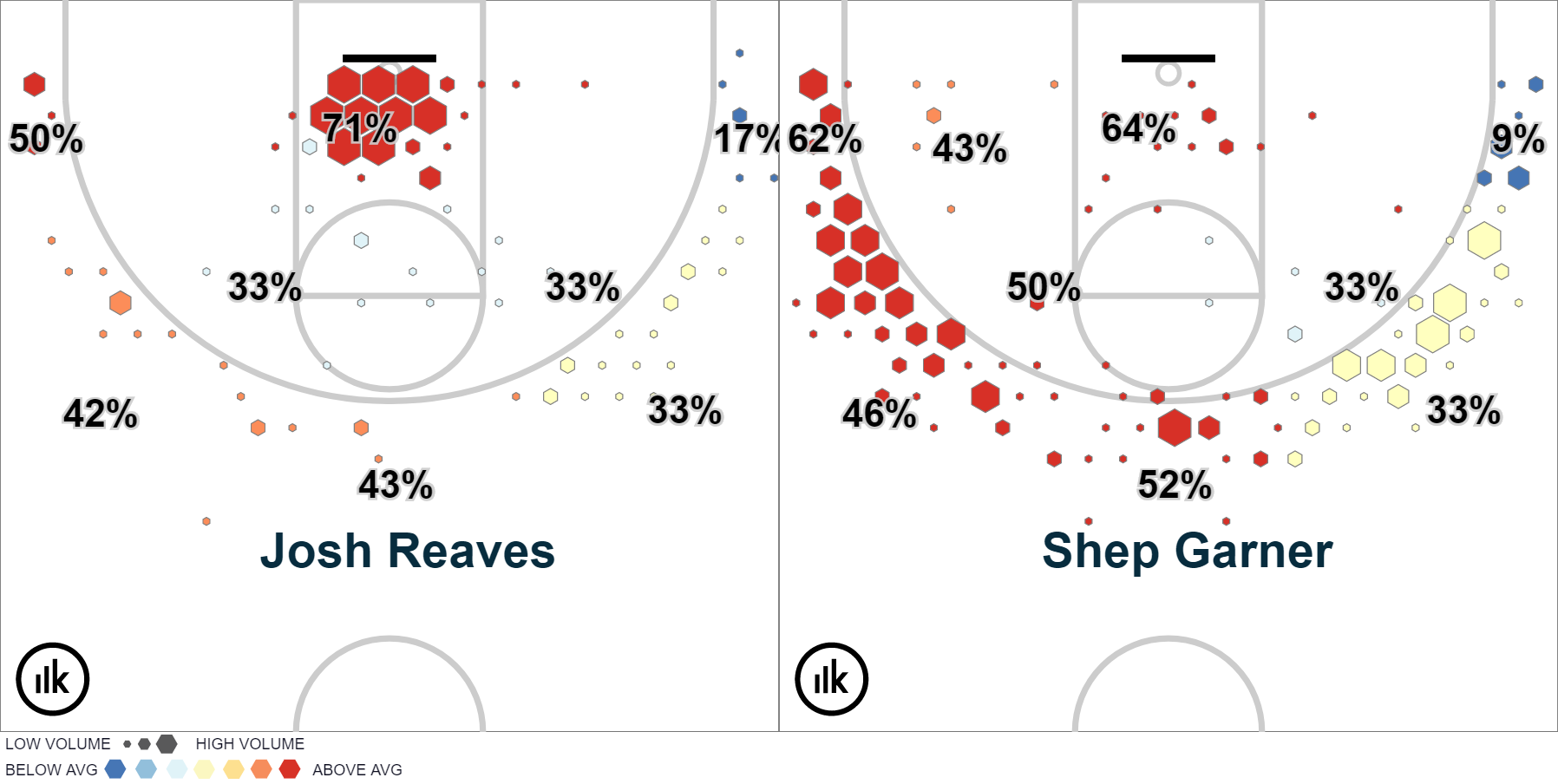 6-foot-2 guard Shep Garner is a senior now and his role has changed significantly over the course of his career. As a sophomore, he was the focal point of the offense in the backcourt and now he’s essentially a shooting specialist. 86% of Garner’s shot attempts have been 3-pointers this season and he’s hitting them at a 42% clip.

Mike Watkins anchors the middle for the Nittany Lions. He’s a traditional catch-and-finish big, leading the Big Ten with a 72% 2-point shooting percentage in league play, who ranks in the top-10 in offensive rebounding, defensive rebounding and block rate. Watkins has had the tendency to get in foul trouble during his career — he was whistled for 4 fouls in 9 minutes and Purdue and has been whistled for at least 4 fouls in 7 of Penn State’s last 8 losses — and his reserves aren’t nearly as dynamic or effective.

7-foot junior Satchel Pierce shoots just 35% on two-pointers and isn’t much of a rim protector while 6-foot-10 Julian Moore can defend the rim but is a significantly worse rebounder than Watkins.

Freshman guard Jamari Wheeler comes off the bench looking to pick pockets. If Wheeler played just a few more minutes he’d be ranked 4th nationally in steal rate. Wheeler isn’t a great offensive player — 44% on tows and 15% on threes — but his defense has the ability to change the game for short bursts off the bench. Sophomore Nazeer Bostick provides additional reserve minutes on the wing, but he’s shooting just 48% on twos and 23$ on threes.

KenPom likes Penn State by a final score of 68-65, giving the Wolverines a 39% chance at the road upset.