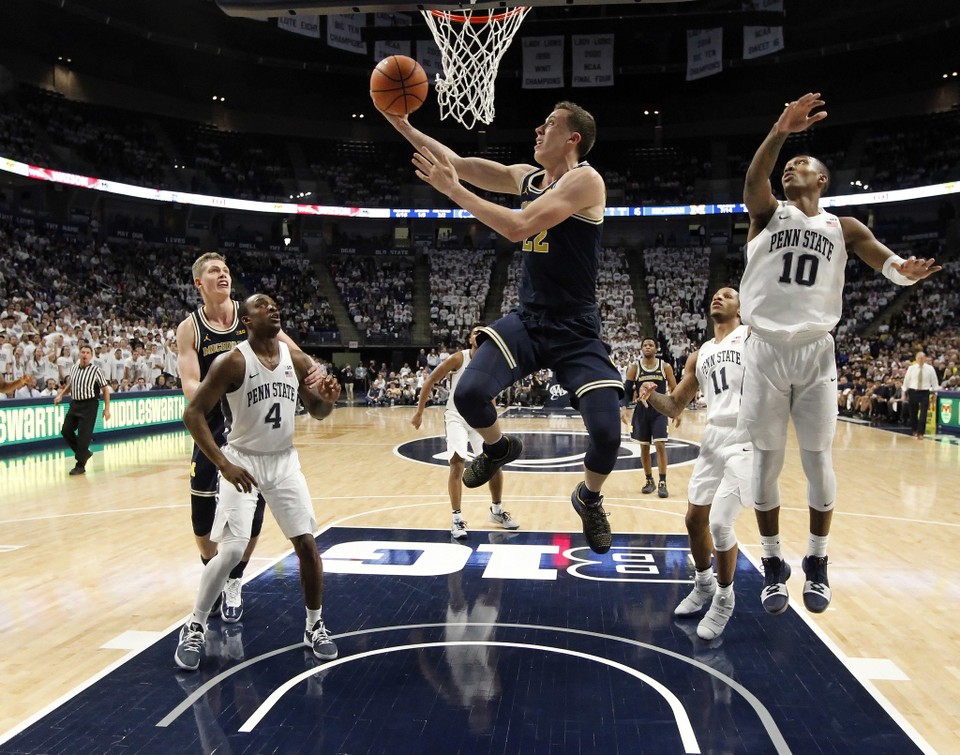 Michigan picked up one of its most impressive wins of the season on Wednesday night, walking out of the Bryce Jordan Center with a 72-63 victory over Penn State.

The Nittany Lions had been playing some of the best basketball in the conference in recent weeks and needed a win over Michigan on Senior Night to keep their realistic NCAA Tournament hopes alive. But the Wolverines had all of the answers in a hostile environment, even when it didn’t feel like they should.

Michigan’s starting wing players didn’t make a basket. The Wolverines turned the ball over five of the first eight times they had the ball. Michigan blew its 8-point halftime lead in only 228 seconds of second half action. Muhammad-Ali Abdur-Rahkman was credited with more turnovers than made field goals.

There were plenty of reasons that Michigan should have lost this game, but they figured out a way to win it. Most importantly, they responded to the inevitable Penn State run early in the second half and then held on down the stretch.

The win came down to good coaching, key shot making, and — for once — a solid performance at the free throw line. 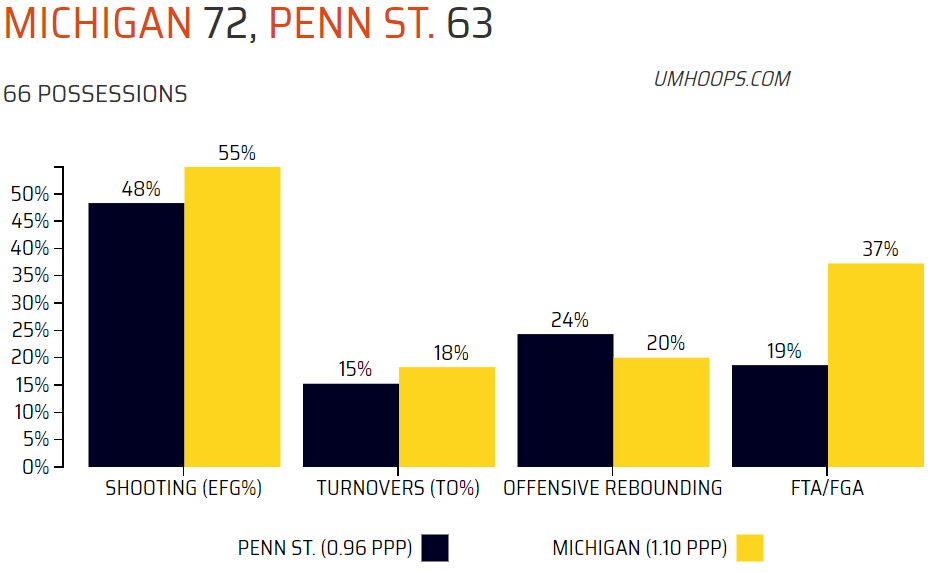 Michigan’s offense checked in at 1.10 points per possession, slightly above its conference average and right on par with its two previous performances.

It never felt like a great offensive performance, but Michigan got just enough out of the things that do work. A few key transition layups, critical pick-and-pop threes for Moritz Wagner, and Duncan Robinson and Jordan Poole combining to score 32 points off the bench. Most importantly, this was a reminder that everything is easier when free throws and 3-pointers go in.

The Wolverines made free throws (16-of-19) and 3-pointers (10-of-21) in the win and that was masked an otherwise underwhelming shooting day inside the arc (43%). Michigan turned the ball over 5 times its first 8 possessions, but only gave the ball away 7 times in the next 58 possessions.

The Wolverines were great defensively for probably 30 of 40 minutes. The first half was a stellar man-to-man effort as Penn State insisted on throwing the ball into the post, where Michigan held up surprisingly well, and the Wolverines utilized a nice double-team scheme on Tony Carr. The Nittany Lions adjusted early in the second half and started to heat up before John Beilein went to a 2-3 zone defense which got the job done late.

The key to Michigan’s defensive performance was its ability to force tough twos. The Nittany Lions only made 44% of their 2-point attempts, their worst 2-point shooting performance since a game in East Lansing on January 31st. Earlier this year, Michigan was forcing lots of twos but struggling to force missed twos. Over the last two games, it has managed to do both.

Star sophomores Tony Carr and Lamar Stevens eventually got their points, but their 40 points came on 37 shot attempts and 4 turnovers. Their teammates were just 8-of-22 from the floor in the loss. Isolation ball was not enough to beat Michigan’s defense.

It has been something of a slow burn, but quietly this season is starting to pick up momentum at just the right time. Michigan has won 6 of its last 7 games including four straight games. The Wolverines still need a bit of help if they want to earn a double-bye in the Big Ten Tournament as they’ll need to beat Maryland on Saturday and hope that Penn State can win Sunday at Nebraska. 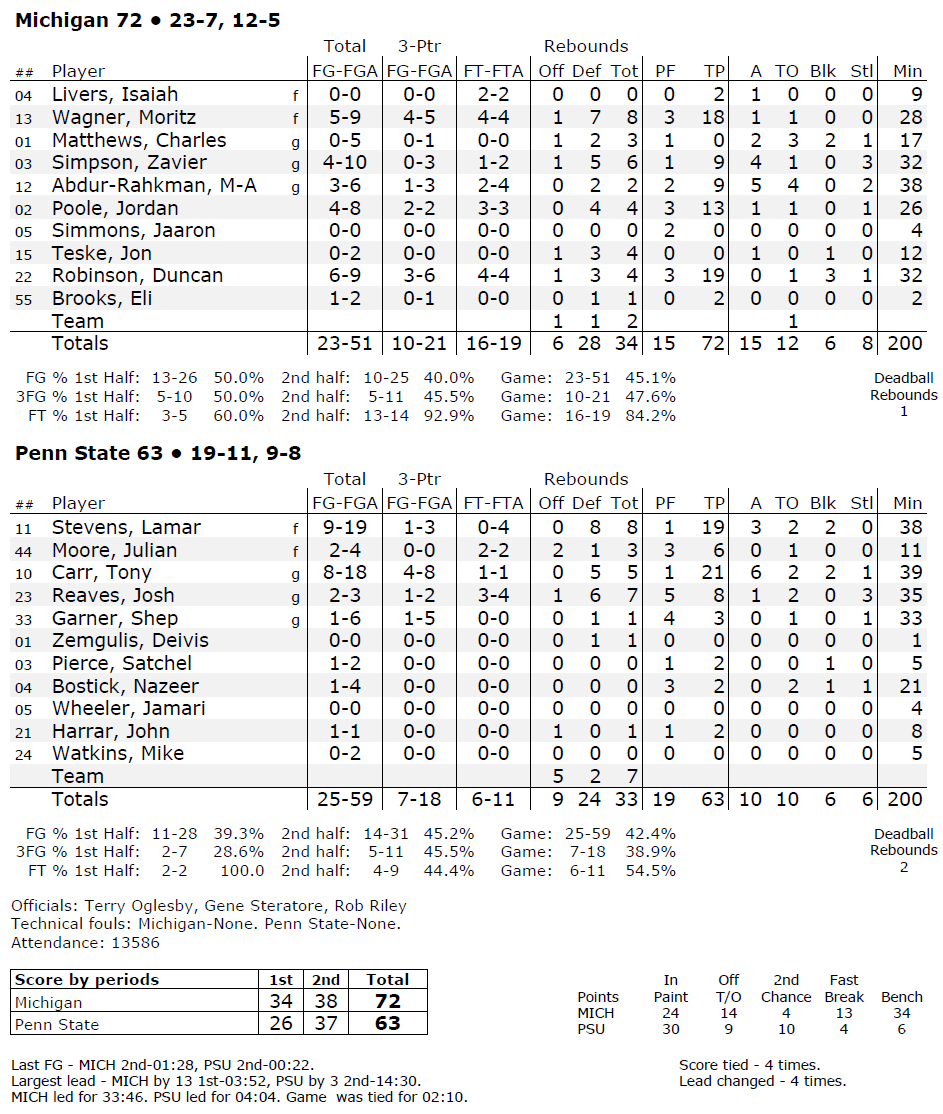