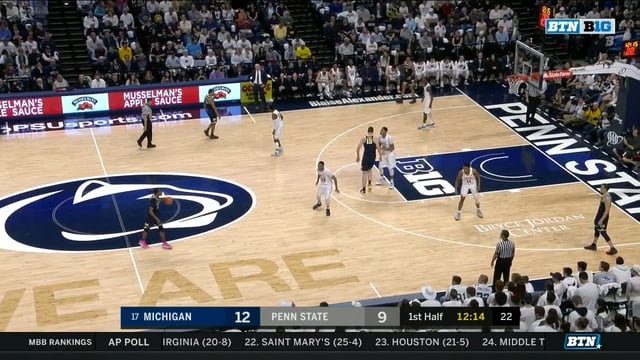 Basketball is a game of runs. Wednesday night, No. 17 Michigan weathered just enough of them to emerge with an impressive 72-63 win at Penn State.

The Nittany Lions, who were ranked just two spots behind the Wolverines by KenPom heading into the game, briefly took the lead in the second half. But aided by some clutch shooting and a 2-3 zone, Michigan fought back, finding a win to steal what could end up being a quadrant 1 victory.

“We’re really improving at just playing really good fundamental basketball,” said John Beilein after the game. “Hated the 12 turnovers, but other than that, we’re limiting some of the mistakes we’re making earlier. … I’m just really proud of us.”

Here are five key plays from the game:

The Wolverines took an early 5-0 lead, but coughed that up with turnovers on 50 percent of their possessions before the under-16 mark. Then John Beilein subbed in Duncan Robinson, and Michigan responded to a 7-0 Penn State run with a 9-2 run of its own.

First, Robinson hit a 3, before Zavier Simpson found Muhammad-Ali Abdur-Rahkman on the wing. Abdur-Rahkman drove into the lane and threw it down for as emphatic of a dunk as you’ll see from the senior guard — perhaps aided by a grudge against a hometown team who never offered. Then Robinson finished down low on a feed from Jordan Poole before hitting a mid-range jumper along the baseline to give his team a 14-9 lead.

“We’ve got defined bench roles right now — it was terrific the way we scored off the bench today,” Beilein said. “… Duncan and Moe are shooting like that, we’re a pretty good team. Jordan Poole continues to give us great energy.”

2. Poole puts Moore on a poster

Michigan really started lighting it up toward the end of the first half.

As an injured Mike Watkins tried giving it another go, Moritz Wagner canned his second 3 of the game. Then Poole hit a 3 of his own, before throwing down a jam that ended up No. 1 on SportsCenter’s Top-10 Plays. After the Nittany Lions turned it over near midcourt, Abdur-Rahkman found Poole running down the right wing. With only one man between him and the rim, Poole showed the nation why it’s never worth it to jump, slamming it down over Julian Moore before staring down the camera.

To add insult, Moore was called for a foul, and Poole drained the free throw to stretch his team’s lead to double digits.

“I definitely knew the camera was right there,” Poole told reporters after the game.

Robinson would hit a 3 after Poole’s big play to extend the lead to 13.

While Michigan took an eight-point lead into the half, it wasn’t long before that lead disappeared, courtesy of a furious Penn State run at the beginning of the second half.

It didn’t help matters that the Wolverines went cold, going nearly five minutes — from 18:36 to 13:38 — without scoring.

But then Wagner struck right back. He hit a corner 3 to end a 10-0 run from the Nittany Lions, ending the drought and tying the game right back up again. Then he hit another 3 to retake the lead.
Wagner would finish with 18 points on 5-of-9 shooting, including 4-of-5 shooting from behind the arc.

“Those two buckets were definitely huge,” Poole said. “Obviously, we couldn’t get shots to fall. Obviously, the momentum was swinging their way. But he’s a big-time player — he’s been here making big-time shots this year and last year.”

After the game, Beilein mentioned that neither shot was the result of him dialing up a play for Wagner. Rather, they happened even as plays broke down.

“… He got open, luckily, and he made them both,” Beilein said, “and all of a sudden it’s a one-point game and we were back.

“The whole game, he was excellent. … Once he settled down, I thought he did a great job.”

With Penn State still hanging around past the midway point of the second half, Michigan sought to pull away. It did just that on three consecutive possessions between 7:35 and 6:36.

Wagner drove down the left lane and finished with his right hand, Poole hit another 3 — his second of the game — before Simpson did his best impersonation of Kareem Abdul-Jabbar.

The quick seven-point spurt stretched the lead to eight. Penn State would never get closer than four points the rest of the way.

After a Tony Carr 3 trimmed the Wolverines’ lead to just four with under three minutes left, the two teams failed to score on their ensuing possessions. The door was open for Penn State to make a comeback, down 58-54, with two minutes left.

Fitting that a Pennsylvania native would help shut the door.

Abdur-Rahkman ended his team’s two-minute scoreless streak with a strong take to the basket. Then Simpson ran a 3-on-2 perfectly, finding Robinson for an open 3 that the fifth-year senior drained.

“I just feel a little bit more engaged when I step on the floor,” Robinson said. “These are the final minutes and games of my college career. I’m trying to make it all count.”

The two buckets proved to be the dagger, and it was all over but the free throws, which Michigan had no trouble with (the Wolverines shot 16-of-19 from the line for the game).

“… I loved the way we started the game, I hated the way we started the second half,” Beilein said. “Just did not have any pop to it at all. I never call timeouts there. We seemed like we were tired and didn’t want to play with the same conviction that we did in the first half. I can’t tell you that the timeout worked, but in the last 12 minutes, we played with a lot of conviction.”