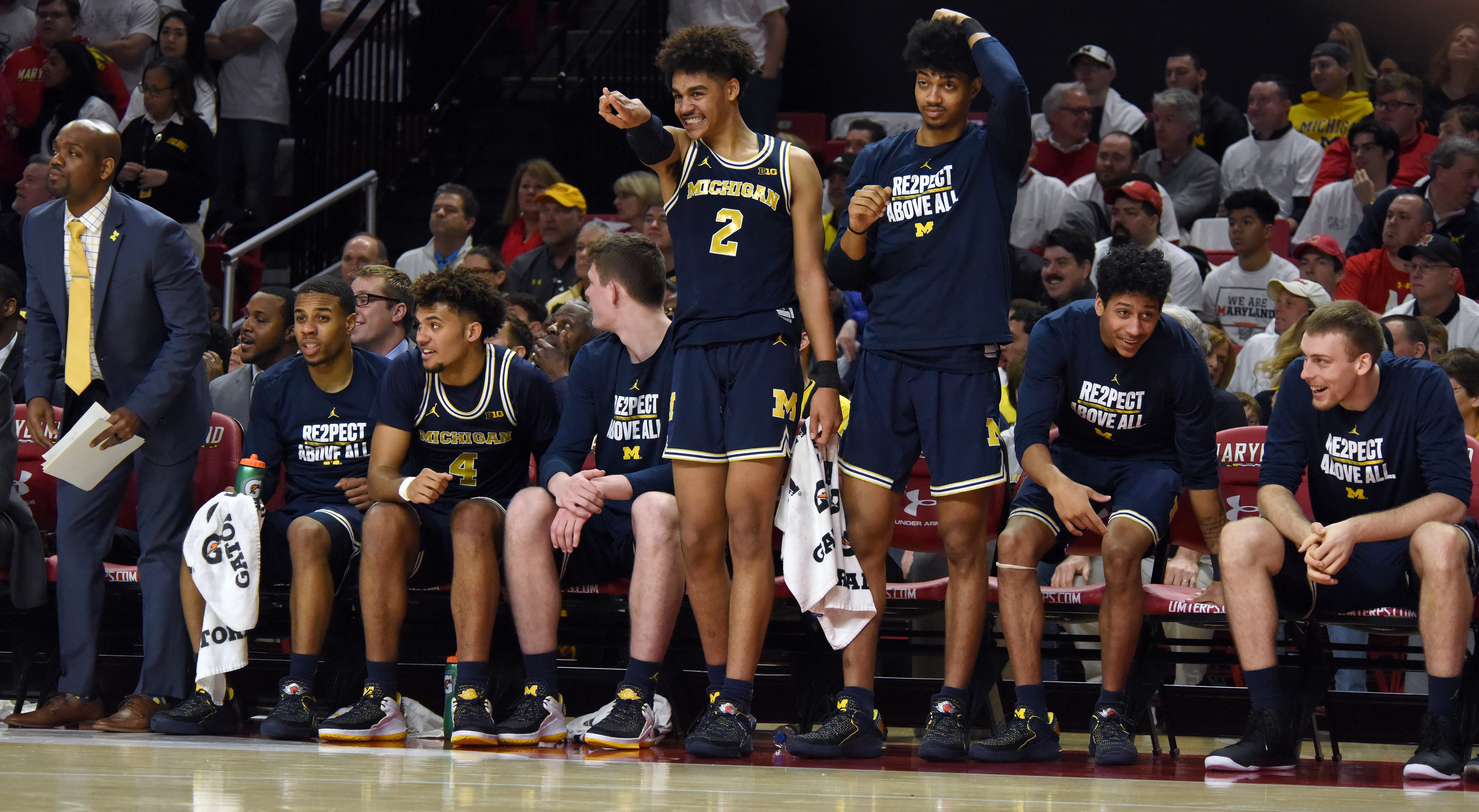 Michigan finished its regular season with a bang, going into College Park and crushing Maryland, 85-61, in the best game the Wolverines have played all year. Here are five takeaways.

Michigan finished its regular season with a bang, going into College Park and crushing Maryland, 85-61, in the best game the Wolverines have played all year. Here are five takeaways.

It took Michigan a while to build a lead — they were down for the first six minutes thanks to turnovers and general sloppiness. But once the Wolverines did, they never looked back, going into the break up by 30.

This was an offensive domination —  a John Beilein nirvana — supplemented by the type of defense Michigan has played all year. The result was a complete domination, the type the Wolverines haven’t had all year in conference play. This was the first game where Michigan’s offense matched its defense and if that keeps up, the Wolverines are going to be terrifying come tournament time.

The Wolverines shot 15-for-31 from beyond the arc collectively to follow up on a 10-for-21 mark at Penn State earlier in the week. Muhammad-Ali Abdur-Rahkman had full control on offense, scoring 28 on 10-of-21 shooting, Jordan Poole got hot and even Jaaron Simmons was in on the first-half fun.

The difference wasn’t 3-point shooting though. Michigan looks cohesive on offense. The Wolverines were moving the ball from station to station until Maryland’s lack of defensive effort caught up to it.

Michigan just beat one of its rivals at home, then won two road games against decent teams — one of them a blowout. The Wolverines are peaking, and with the Big Ten Tournament around the corner, they couldn’t ask to be doing so at a better time.

Muhammad-Ali Abdur-Rahkman is playing better than he ever has

Abdur-Rahkman’s career-high coming into Sunday was 26 points. He tied it just after the eight-minute mark in the second half, throwing down a transition dunk, then passed it with a layup a few minutes later.

We’ve seen the senior step up in big moments multiple times this year — his performance at Purdue comes to mind — but Abdur-Rahkman stepped on the Terrapins’ throat. He finished 28 points, eight rebounds and seven assists, taking every 3-pointer Maryland gave him and poking holes in the defense by instigating a drive-and-kick game that opened up 3-pointer after 3-pointer.

“I called Muhammad over and I said, ‘You’re doing a (Derrick Walton) impersonation right now at just the right time,’ ” Beilein said. “… He just, like, gets better every year and all of the sudden, in February, he can have a great, great February.”

On defense, Abdur-Rahkman helped force the Terps into submission, putting up two blocks and a steal. He found easy buckets in transition, feeding outlets to Simmons and Zavier Simpson for layups before taking it himself a few minutes later.

At the first half’s buzzer, Poole pushed the pace in transition and found Abdur-Rahkman, who promptly nailed a triple. There were 20 minutes to go, but at that point, the game was all but over.

Jordan Poole had exactly what he wanted: Bruno Fernando, standing outside the arc, trying to keep pace in what both knew was a mismatch. The freshman stared him down, jab stepped, then decided pull up. The shot fell and Poole was on his way to a third straight game of double-digit scoring — a mark he had yet to hit this season.

For all of Poole’s ability, consistency had been a glaring flaw. He could never seem to string together more than two impressive games in a row, his spark-plug performances littered seven minute performances wherein Poole would brick a 3, lose his confidence, then get pulled by Beilein for the rest of the game.

In Poole’s last three games, that seems to have changed. He put in 15 last Sunday against Ohio State, shooting 4-of-5 from beyond the arc, then went to College Park and played solidly with 13 points and a 124 offensive rating, per KenPom. The momentum flowed into Sunday, when he threw up 12 points on 3-of-5 shooting, all from beyond the arc, and drew a foul on one of the misses.

“I think the coach is playing him more, that’s been a good thing,” Beilein joked. “And he showed us that defensively, and offensively, he’s about making the next right play more than maybe typical freshmen or maybe he was earlier in the year. So now, we’ll play through a mistake, because we know that they’re not as common as they were when he was still developing.”

Michigan doesn’t need much out of Simmons at this point. Zavier Simpson has done more than expected running point and Abdur-Rahkman can be a primary ball-handler when needed. But Simmons is finally proving himself capable of giving 10 solid minutes per game.

He had one of his better stretches of the season in the first half, scoring four easy points after getting ahead in transition, then knocking down a triple off an Abdur-Rahkman drive-and-kick look. The cherry on top: a bounce pass threaded through the teeth of Maryland’s defense that found Wagner for a layup.

Simmons has struggled to learn Beilein’s system — that’s no secret — but he seems to have picked up on things a little more lately.

“Obviously when we come in, we’re a big, ‘Try to get on a run’ team,” said Poole, who recently noted that Beilein’s system was tougher than calculus. “And so it was really hard to set up plays and stuff like that when you’re running, but when we slow the game down and we have a set and coach calls it, we’re pretty confident.”

Michigan put up a truly absurd 1.65 points per possession in the first half. And yet, in the locker room, Beilein only wanted to talk about the other side of things.

“At halftime, I didn’t talk about (the offense), I talked about holding Maryland to 24 points at halftime,” he said. “That was what was great about that half.”

Michigan stifled the Terps, turning over Mark Turgeon’s squad eight times in the first half and taking advantage in transition. Simmons and Abdur-Rahkman especially pushed the pace in the first half. Even when the Wolverines didn’t score right away, they managed to take good advantage of cross-matches and a general lack of defensive urgency on Maryland’s part.

Though the Terps missed their fair share of open shots — something Beilein pointed out postgame — Michigan was getting in passing lanes, picking up deflections and disrupting everything Maryland wanted to run. In other words, the same type of defense the Wolverines have played all year.

Whenever Michigan has scored at high clip in the past, however, the defense has been comparatively lackluster. At least in conference play, this was the first game the Wolverines had their best stuff on both ends of the floor. If they can carry that into New York, the rest of the Big Ten should watch their backs.