Michigan ended the regular season with a blowout win at Maryland on Saturday afternoon.

Michigan is rolling into March. The Wolverines have won 7 of their last 8 games and played their best half of the season in their regular season finale at Maryland on Saturday afternoon.

Michigan’s first half performance was nearly flawless. The Wolverines failed to score in their first four possessions and then rattled off 54 points in the final 29 possessions of the opening half. That’s 1.86 points per possession over the final 16 minutes, or 1.65 points per possession for the half. Ruthless, efficient offense and solid defense put the game out of reach as the teams went to the locker room to a chorus of boos from the home crowd.

Senior guard Muhammad-Ali Abdur-Rahkman set a career high with 28 points in the final regular season game of his career. He scored 22 of them in the first half and added a team-high 8 points and 7 assists for good measure. The Wolverine bench scored 28 points, led by Jordan Poole’s 12-point first half, and Michigan coasted to its 6th road win of the season. 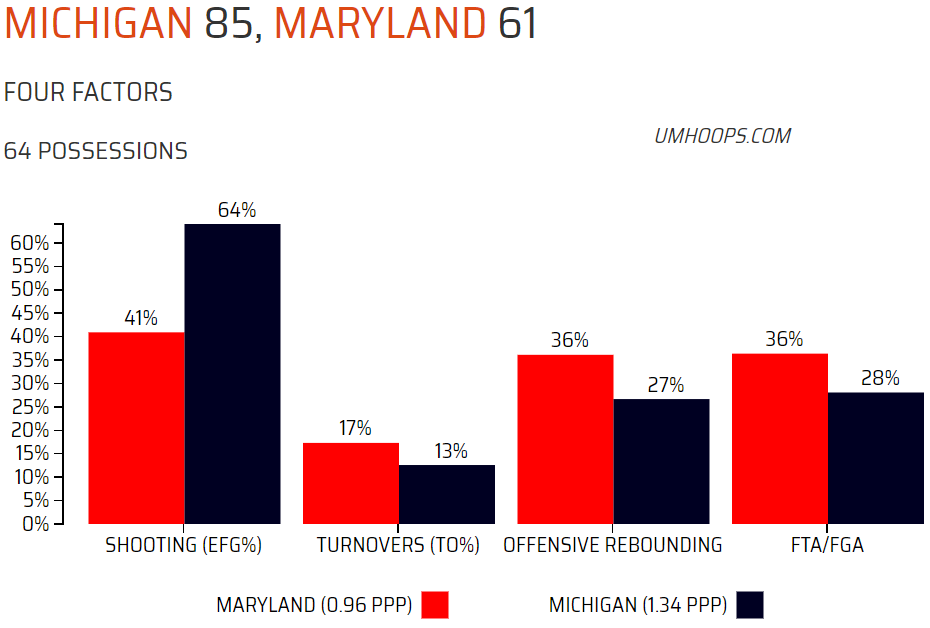 Michigan’s 1.34 points per possession of offensive output was on par with its best offensive performances this year — at Purdue, at Wisconsin — and the first half was scintillating. The Wolverines had basically been playing offense with one-arm tied behind their back given their shooting struggles early in the year, but now they are starting to fall. When those 3-pointers go in, Michigan made 15-of-31 this afternoon, the offense reaches new heights.

We’ve documented the 3-point volume gap that Michigan creates this season and it was obvious today. The Wolverines attempted 31 3-pointers to Maryland’s 18. Michigan made 15 of those and Maryland made just 3. The Wolverines would have had an advantage even if they didn’t make nearly half of their 3-pointers, but that volume can push a game out of hand quickly.

The Wolverines also did a great job of taking advantage of transition opportunities, scoring 13 points on the fast break and utilizing their defensive ability to force deflections and steals to trigger easy offense.

Maryland’s offense found some traction in the second half, but the game was largely out of hand by that point. The Terps scored just .73 points per possession in the opening 20 minutes, but did a great job of drawing fouls and getting to the line in the final 20 minutes. Michigan’s defensive rebounding performance was substandard — allowing Maryland to rebound 36% of its misses for 13 second chance points — but the Terps only shot 49% on twos and 17% on threes.

This Michigan hot streak started a walking pace with several home wins over bad teams — Northwestern, Minnesota and Iowa — but the work that the Wolverines have done over the last week has certainly elevated expectations for next week in New York City and in the NCAA Tournament. Michigan’s KenPom rank is up to 14th with the road win, the highest has reached all season, and it is quite clearly playing its best basketball of the season.

Michigan’s Big Ten Tournament seeding will remain in flux until Sunday night. If Penn State wins at Nebraska, the Wolverines will earn the double-bye and play on Friday afternoon (2:30 p.m.). If the Cornhuskers win, Michigan will play on Thursday afternoon (2:30 p.m.) against the winner of the 12-13 game before potentially facing Nebraska on Friday. 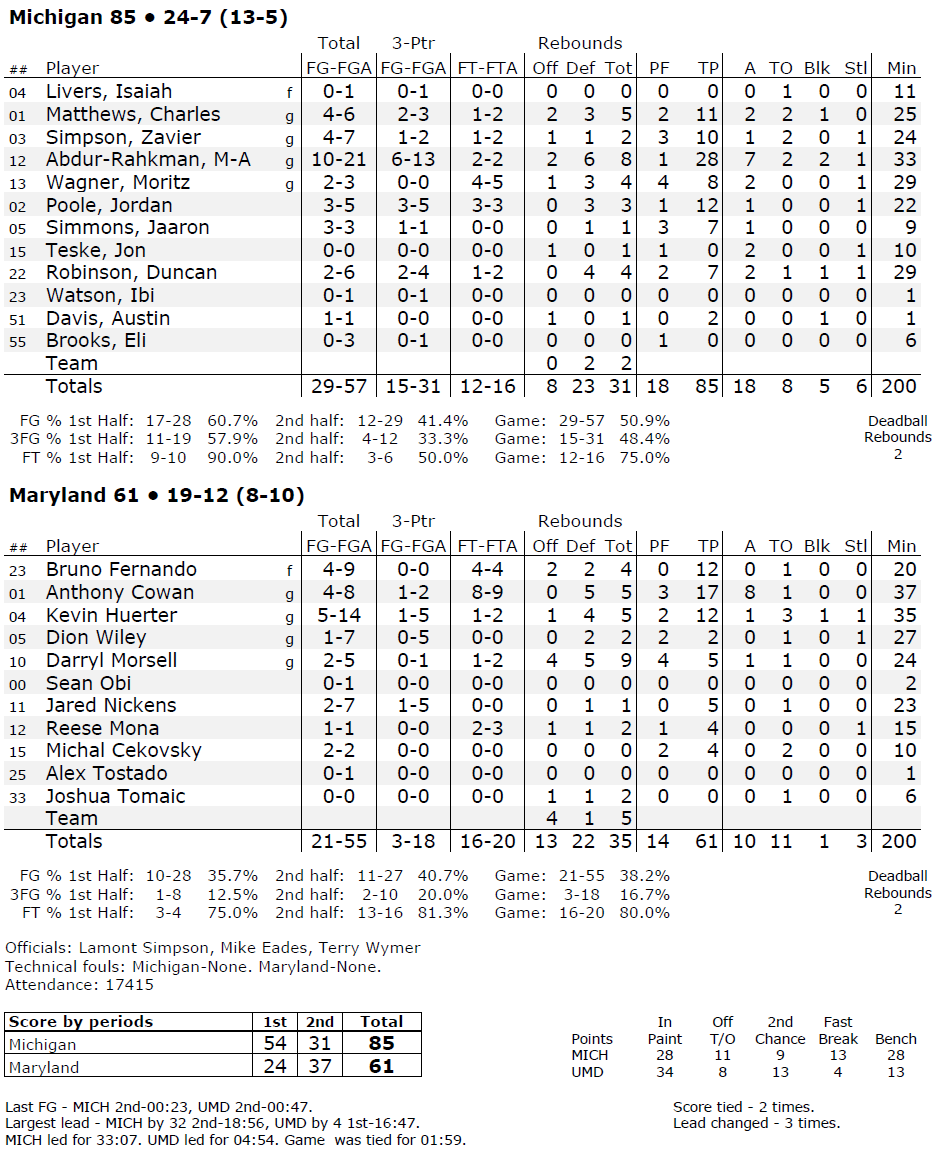