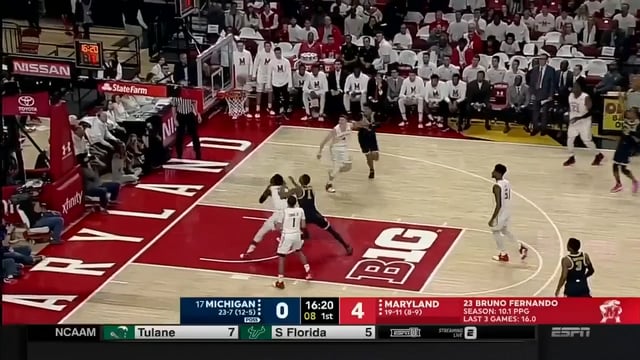 Here are Five Key Plays from Michigan’s win at Maryland.

It might have been Maryland’s Senior Day. Yet it was Michigan’s senior guard Muhammad-Ali Abdur-Rahkman who took over, propelling the Wolverines to a 30-point lead at halftime as they blew out the Terrapins, 85-61. Michigan earned another impressive road win, closing out the regular season with its fifth consecutive victory.

The Wolverines jumped up to No. 16 in the KenPom rankings after the victory, and will now await the result of Nebraska-Penn State — a game that will determine whether Michigan gets the four seed and a double bye in the Big Ten Tournament or not.

Here are five key plays from the Wolverines’ win over Maryland:

Michigan didn’t score on its first four possessions, yet still averaged 1.65 PPP in the first half. That was mostly thanks to the hot shooting of Abdur-Rahkman. Sporting a new pair of goggles after getting poked in the eye in a walkthrough before Michigan’s game at Penn State on Wednesday, the senior guard was on fire early on.

He hit three early 3s, including back-to-back shots, to give his team an 11-10 lead — its first of the game.

“We should all wear goggles,” joked John Beilein after the game.

Added a smiling Abdur-Rahkman: “I’m going to keep wearing them. … Now if I would’ve missed a couple shots, I probably would’ve threw it away.”

Jaaron Simmons’ final year of eligibility has not gone the way many — including him — might have expected.

But the fifth-year senior point guard has bounced back from a three-game stretch in which he didn’t play to earn a spot in the rotation again. As Zavier Simpson’s backup point guard, Simmons has had some nice stretches of play over Michigan’s five-game win streak — yet perhaps none were as impressive as what he did against Maryland.

In a span of under two minutes, Simmons scored 7 points — now his season high — and helped Michigan pull away.

It’s too late to expect a true breakout performance. But Simmons may be able to give Michigan 8-10 minutes of steady offensive play, and that could make a difference.

While it may have taken Jordan Poole several minutes to make an impact on the game, Michigan was able to pull away for good once he did.

The Terrapins broke out their full-court press near the midway mark of the first half, only to see Poole immediately knock down a 3 from the right wing. On the following possession, he jab stepped to create space before drilling another 3 to stretch the lead to 11, before Simmons found Moritz Wagner in transition for a layup.

Over the past three games, Poole has averaged 23 minutes of playing time while scoring 13.3 points per game and hitting 9-of-12 3s. It’s been the most consistent stretch of his career.

Michigan’s freshman wing wasn’t done yet, though. Near the end of the half, he hit a 3 to extend the lead to 27, turning around to give an earful to Maryland’s student section.

“Definitely just excitement,” Poole said when asked about the play. “… When you look and you’re up by 20 in the first half, there’s just a lot of momentum and energy. The fire that I have inside of me definitely came out a little bit.”

Then, after Simpson blew past Anthony Cowan Jr. for a layup that gave the Wolverines a two-for-one opportunity, Poole quickly found Abdur-Rahkman in transition with only a few seconds left. Abdur-Rahkman hit the 3, and Michigan jogged into the locker room with a 30-point lead as the home team was booed off the court.

It was a clinical first-half performance from nearly all involved, but especially Abdur-Rahkman and Poole.

The former shot 7-of-12 from the field, hitting 6-of-10 3s, to lead all scorers with 22 points. He also added 5 rebounds, 4 assists, and 1 steal and block apiece. After the game, Beilein compared him to Derrick Walton Jr., in that both players finished their careers on an upward trajectory. Like Walton, Abdur-Rahkman is finding that he can make teams pay if they switch screens.

“Muhammad-Ali Abdur-Rahkman, he’s this guy that, as the year went on, we began to realize as a staff, he can do so much more than we were probably allowing him to do,” Beilein said. “… He’s basically right now become a guy we play through like we would with Tim Hardaway (Jr.), Trey Burke, Nik Stauskas, Caris Levert.

“We’ve played through some really good players, and we’re trying to do that right now and he’s not disappointing us.”

Meanwhile, Poole tallied 12 points on 3-of-4 shooting from beyond the arc, adding just another piece of evidence that his offense off the bench may prove important for Michigan this March — especially when he’s on the floor in a lineup featuring Simpson, Abdur-Rahkman, Duncan Robinson and Wagner.

“If you add offense and defense,” Beilein said, “it probably was (the best half of the year).”

5. Matthews gets buckets in second half

The offense slowed down in the second half, due in part to Michigan’s willingness to take its time with the shot clock.

Abdur-Rahkman shot just 3-of-9 in the second half, missing all three of his attempts from deep. Wagner scored just once. Poole took one shot — and missed. But the offense’s slack was picked up by Charles Matthews.

Matthews, who has struggled with his shooting (particularly finishing near the basket) and turnovers recently, put together a second half that could be something to build off of. After going scoreless through the first 20 minutes, he tallied 11 points in the final frame, with two drives to the basket, a pair of threes near the corner and one free throw.

Matthews did commit two more turnovers, but as Beilein hinted to on Friday, Michigan will take the turnovers if Matthews continues racking up assists — and he did pick up two more against the Terrapins.