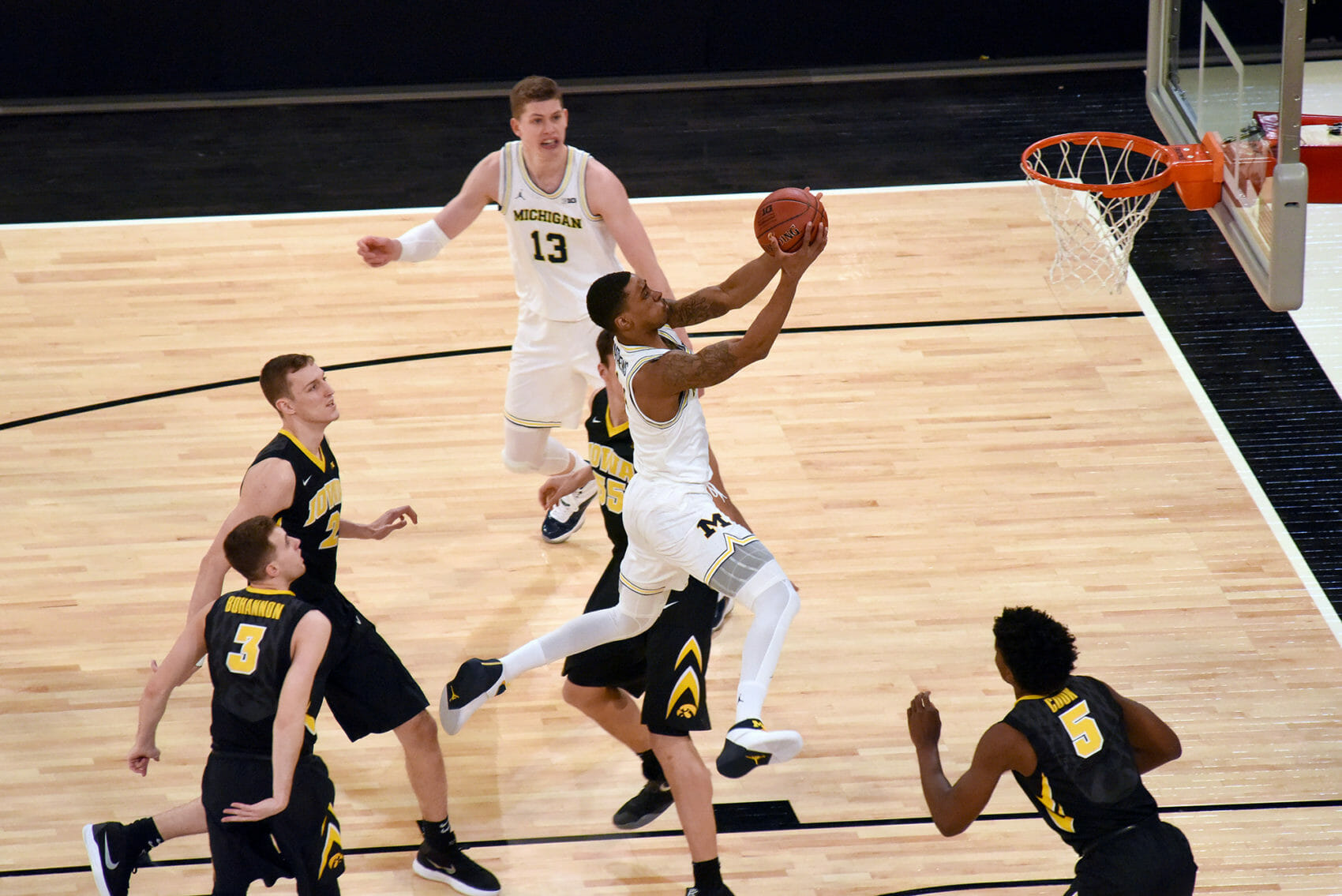 It was painful, but the Wolverines escaped Madison Square Garden with a win on Thursday afternoon, beating Iowa 77-71 in their Big Ten Tournament opener. Here are five takeaways.

It was painful, but the Wolverines escaped Madison Square Garden with a win on Thursday afternoon, beating Iowa 77-71 in their Big Ten Tournament opener. Here are five takeaways.

On the elevator from press row to the locker room, two Michigan State fans joked that the same refs better be working if the Spartans play the Wolverines on Saturday. One told the other that Michigan got screwed, even in his eyes.

“I’m not even gonna look at some of those calls,” Beilein said. ” There were some things that I would like to look at again. But really, when you got Moe Wagner and Muhammad in there, involved in things like that, it certainly takes a lot away from our game … but I gotta respect the officials.”

Foul trouble was a constant for the Wolverines. Muhammad-Ali Abdur-Rahkman and Duncan Robinson both picked up two early, closely followed by Wagner. Iowa was in the bonus at the 16-minute mark of the second half. Wagner and Abdur-Rahkman both picked up their fourth fouls with about 10 minutes to go in the game — both later fouled out.

The referees doled out whistles with some equality — Iowa shot just 18 free throws to Michigan’s 32 — but the constant foul-calling made it impossible for the Wolverines to garner any offensive flow (nor did it help that Abdur-Rahkman and Wagner were in and out of the game due to foul trouble.)

“It is frustrating, especially in the postseason when you get in foul trouble,” Abdur-Rahkman said. “This could be your last game. But you just gotta fight for it. The bench stepped up.”

Duncan Robinson steps up in the clutch

It’s been a rough senior year for Robinson. He’s been in and out of slumps, never seeming to put together more than a good game or two at a time, and lost his starting job back in January.

On Thursday, though, he was everything John Beilein could have asked him to be. Suddenly the best offensive option in the absence of Wagner and Abdur-Rahkman, Robinson nailed a go-ahead 3-pointer in overtime.

“Every (3-pointer) was a playcall for him,” Beilein said. “That’s tough, when you say, ‘Here’s what we’re running. All eyes are on you. Execute it and then knock it down while you’re running away.’ Those three that he hit … that’s seniors who do things like that.”

When it was his turn to take foul shots two minutes later, he made both, filling a gap that Michigan has felt all year (and at no time more than the end of regulation on Thursday.)

Michigan made just three 3-pointers all game. All were from Robinson.

“When Duncan’s hitting shots, our momentum increases,” Zavier Simpson said. “We get going, our energy gets better.” 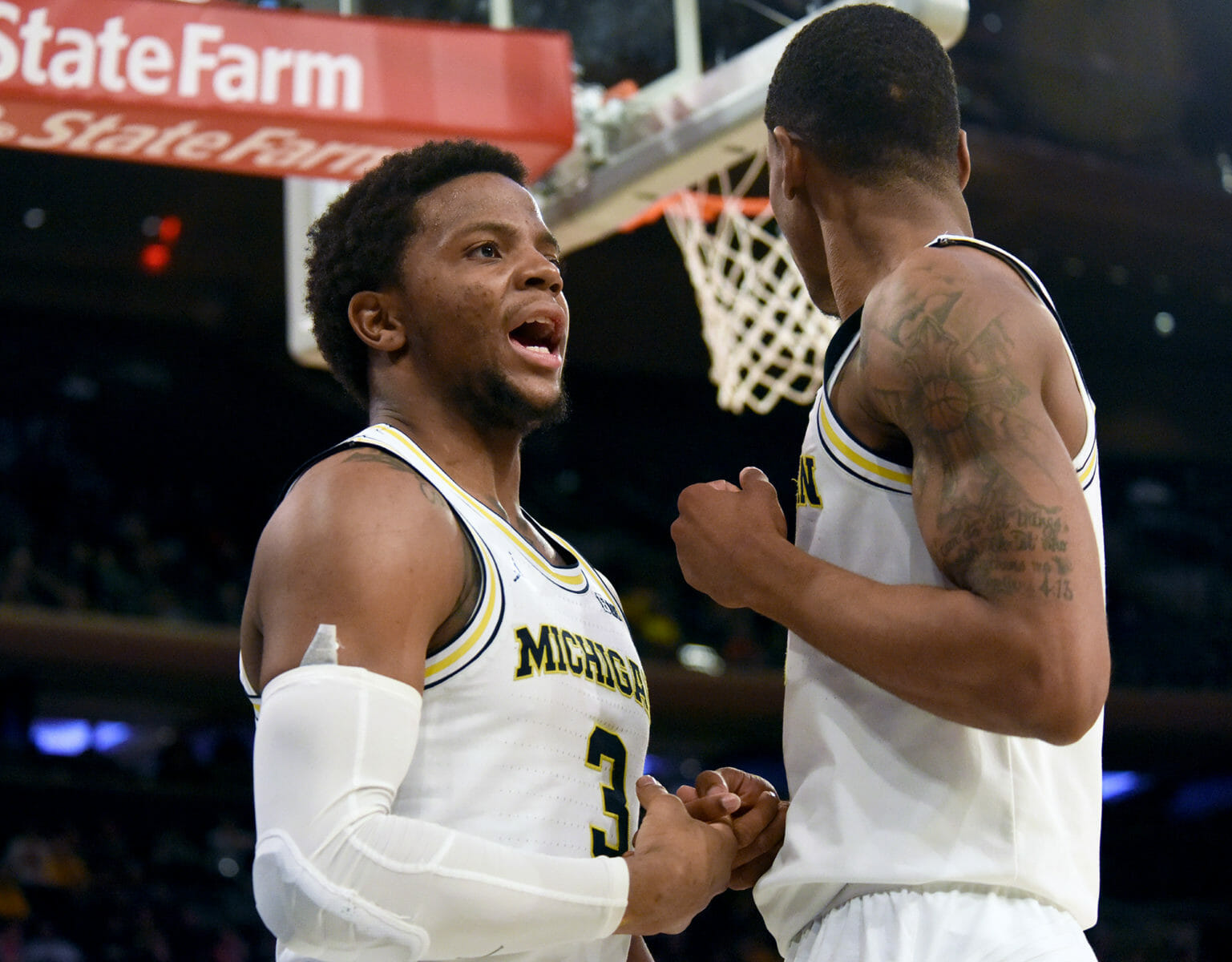 After he struggled through nearly all of conference play, there seems to be some light at the end of the tunnel for Matthews.

He followed a strong performance at Maryland on Saturday by taking KenPom MVP honors on Thursday, logging 41 minutes and scoring 16 points on 5-of-10 shooting with eight rebounds.

That includes a clutch long two-pointer that gave Michigan a six-point lead with just over two minutes to go in regulation, though the Wolverines would go on to cough it up.

“That was big for him as well,” Beilein said. “There’s not — hasn’t been a lot of confidence there, in February for him.”

At this point, if Michigan can get a game like that from Matthews, the result will usually be far better than an overtime squeaker over a bad Iowa team. Wagner has carried the offensive load along with Abdur-Rahkman and, every so often, Poole. Despite the highest usage rate on the team, Matthews has been one of the most inefficient scorers all year.

Defensive rebounding falters without Moritz Wagner, but steadies thanks to Jon Teske

Helped by Moritz Wagner’s foul trouble — the junior sat for 12 minutes in the first half after picking up his second foul early on — Iowa turned the tides. Wagner isn’t just the Wolverines’ best rebounder, it isn’t close. Coming into Thursday, he had a defensive rebound rate over five percent higher than anybody else on the team. Take out Jon Teske and he nearly 10 percent higher than anyone else.

Predictably, Iowa went into the break with a 43 percent offensive rebounding rate. Likewise, Michigan had all of two fastbreak points at the same juncture.

When Wagner was on the floor in the second half, that changed. He picked up three defensive boards and helped spark a transition game in doing so. The Wolverines went on a 9-0 run, grabbing the lead back before Wagner picked up his third foul and was forced to sit.

Jon Teske picked up some of the slack from there, grabbing nine rebounds of his own.

“In the second half,” Teske said, “We knew (we had) to step up, box out and go get those rebounds.”

Iowa finished with a relatively modest 27.9 percent offensive rebounding rate thanks to Michigan’s second-half effort. After the first half, the Wolverines gladly took it — along with the win.

Michigan struggles from beyond the arc

The Wolverines’ offense seemed to have turned the tide last week, shooting 10-of-21 from outside at Penn State and 15-of-31 at Maryland. That was always going to be unsustainable — something John Beilein himself pointed out after the Maryland game — but it seemed that Michigan’s offense had found its footing.

Turns out, two games are just that. The Wolverines went the entire first half without hitting a 3-pointer on Thursday, going 0-for-7 while Iowa jumped out to a lead at the break thanks to a 5-of-9 3-point shooting performance of its own.

Not much changed in the second half, or overtime.

“We definitely were aware (of the struggles),” Jordan Poole said. “But it’s great to see that … we can go out there and get stops and turn our defense into offense.”

Michigan finished the game just 3-of-19 from beyond the arc, all three triples coming from Duncan Robinson. The offense never seemed to run quite right and any momentum from last week went kaput.