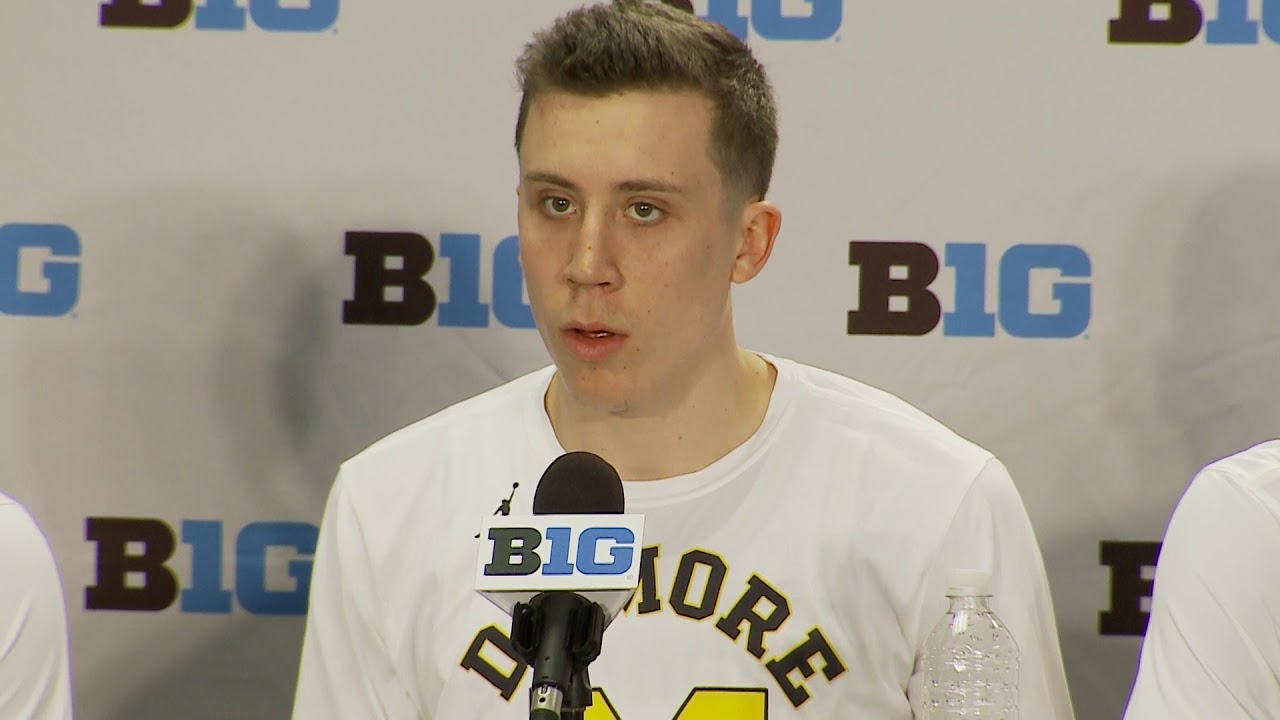 COACH BEILEIN: I was really — I was impressed with Iowa, and I saw them play several times this year, both on video and when we played them. Watched the game last night. Got so much really good, young talent. Very young team that is going to make a lot of noise in the Big Ten in the future. I’m proud of our guys, because it was not — if you just look at the stat lines, the only way we could win that game was defense. The foul shots didn’t go in. The 3s didn’t go in. I think one guy made a 3. That was the exact opposite of what we saw at Maryland last week. But we’ll take it. Our defense won the game. Zavier Simpson did an incredible job on Bohannon. Again, just did a wonderful job. Just a lot of energy to get that done. Did a great job. And everyone else just sort of pitched in. They’re a really tough guard because Garza and Cook can all shoot. And they’re a little bit like us, they spread you out and it’s tough to get to all the shooters. Great win for us. Quick turnaround, Nebraska tomorrow.

THE MODERATOR: Questions for the student-athletes. Q. What’s the win say about the depth of the Michigan team?

DUNCAN ROBINSON: I think it says a lot. Foul trouble obviously early in the first half and then in the second half and guys (indiscernible) come in and step up, it’s huge. That’s what you need this time of year, a deep bench and I think we had that today, which was really important.

Q. You guys struggled from 3 throughout the game and coincidentally the only shot you hit in overtime is the 3-pointer. How were you able to fight through not having a great shooting night and still able to come out for the win?

ZAVIER SIMPSON: Just being able to stick together. We fought through adversity. There were some tough calls out there. We just wanted to stick together, keep playing hard and keep playing smart. That’s what we did, and we’re just glad to come out with the victory. Q. What was your mindset going into overtime right after Iowa hit the big 3 to tie the game?

CHARLES MATTHEWS: Well, we just knew it was win or go home. And we understand they made a great run at the end, and we said we just want to stick together and try to come out of here with the win.

Q. Duncan, seems like you’ve been doing this forever, kind of hitting big shots and 3s. Describe the play and did it feel great coming off your hand?

DUNCAN ROBINSON: Yeah, it was a great play called by Coach B and X. It’s a good screen by Jon and a good pass by Charles, I think, Charles. And it all stems from my teammates and coaches, giving me confidence to step in and take that shot in the first place, and today fortunately enough I was able to make it.

Q. Duncan, sticking with you, really maybe for the other guys, too, when you’re missing, when the team is missing, does that sort of become contagious, too. Do you sort of find yourself in a little more pressure — man we’ve got to hit one of these? And from Duncan’s standpoint, how do you overcome that, if that’s the case?

DUNCAN ROBINSON: Not necessarily. We know we’re a really good shooting team. We’ve done it a lot this year. And we certainly do it every day in practice as well. It’s something we emphasize. If they’re not going early, we like to think of it water is going to find its level. Fortunately enough we were able to make some late, but at the same time it puts more pressure on our defense and we stepped up in that area today. And we knew we needed a heightened sense of urgency on that end.

ZAVIER SIMPSON: Just being able, when Duncan’s hitting shots, our momentum increases; we get going. Our energy gets better. We feel like, as you said, we’re a great shooting team, just have to keep shooting, just stay confident. Q. Duncan, if I’m seeing this right, there’s only one game you didn’t score this year and it was Nebraska.

DUNCAN ROBINSON: Yeah, I think so. I don’t know. Obviously they’re playing real well right now so they kind of put it on us at their place this year. I know they’re gunning for us because they feel they’re in a door-die situation. So we have to match their intensity, and we’ll be ready for them come tomorrow.

Q. This is the first time that the Big Ten Tournament is held here at Madison Square Garden. What are your thoughts and feeling playing in the biggest stage in sports?

ZAVIER SIMPSON: It’s great. The atmosphere is great out there. Just glad to be able to play in an arena like this. Just happy we can get our first victory here. And hopefully we can continue. But as far as playing here, it’s an amazing feeling.

DUNCAN ROBINSON: It’s incredible. Being an East Coast kid growing up, this is the mecca of it all. I feel very fortunate to be here, and specifically with this team. I feel like we can band together and do something special.

CHARLES MATTHEWS: Experience playing here is second to none. This is every childhood dream, to be able to say that they played in the Garden. And especially, like Duncan said, having a great group of guys, wouldn’t rather have done this with anybody else. Q. How do you feel that you guys have changed, this team, since the last meeting in Nebraska?

DUNCAN ROBINSON: I thought we’ve grown a lot. I think that was one of the first teams that really started switching ball screens. I think we’ve learned a lot since then. I think a lot of people as a team and individually we’ve grown a lot. So hopefully that will be on display tomorrow.

Q. With Mo and Muhammad-Ali in foul trouble, do you feel you have to be creative with the lineups at the end of the game; how did you approach that?

COACH BEILEIN: We haven’t had that all year long. We haven’t had three guys in foul trouble in the first half, and our situation in the second half, with guys fouling out. Someone do the stat, probably just a couple of games. There were some tough breaks. And, yeah, we just had to try and find ways. But we felt Jon was still, his presence in there was good enough. Jordan Poole did not have a very good game. But at the same time, he’s capable of that. And so we went with those. We played Duncan as a 3-man a little bit. And it all worked out. But we want to stay away from that situation.

Q. Is there a reason why we didn’t see Isaiah Livers play for the majority of the overtime period?

COACH BEILEIN: We probably felt that the lineup we had was the best chance at winning. How is that?

Q. What did Nebraska do so well when you guys played them?

COACH BEILEIN: Bill Belichick impersonation. What was that?

Q. What was so good about the Cornhuskers the first time you played them?

COACH BEILEIN: If anybody has gone to Nebraska to play, it is a tremendous, tremendous environment and atmosphere. And the place was all jacked up and they were ready to roll. They have a — they can go small. They can play big or small. And they came in with great quickness and great game plan and were just much better than us. And that’s all it was. They were just better than us. I think they beat us on that day, whether it was in Nebraska, here, anywhere, hopefully we’ve improved a great deal for some things they threw at us. But still Tim’s got a really, really good team and very deserving team of being here and being in postseason play.

Q. You coached here in the Big East Tournament with West Virginia, what’s it like to be back with the Big Ten and Michigan?

COACH BEILEIN: I played in some quarterfinal games here with West Virginia, but I don’t think I’ve ever been in a quarterfinal game that was as loud as that game today. That was an exciting atmosphere to be in. And it’s really — I don’t think — we had to sacrifice a lot to put ourselves in this position to be in the Garden. I think when it’s all said and done, we’ll all say it was worth it. If you witness these games we’re having right now and how New York loves basketball, they love college basketball. Something that I mentioned several times, March in New York is just — I don’t know why it’s a really favorite time of mine.

COACH BEILEIN: Like I said, Iowa is just, is right there. I mean, they’re right there. Just a little young. Got all freshmen and sophomores out there. And we just got — you could see what we were like when we took our seniors off the court and our junior off the court. So they just really battle. And I’m just — there’s not — with the parity there is in college basketball, I don’t care where it is, if you have any games going on in a tournament right now, every game is going to be competitive. Nobody has home advantage. Everybody’s playing for a whole lot. Usually, it’s a win or go home. And so it means a lot to just get that W.

Q. Were you frustrated at all with the pace of the game?

COACH BEILEIN: No. No, I did want to run more I think in the second half when we got going — we got the stops and really ran, and all of a sudden we took the air out a little bit. That wasn’t me. That was the rebound and getting it and walking it up the court. I would have liked to — I felt our transition offense is some real good numbers. I wanted to do it. We stopped. But that’s telling me we’re a little tired right now. And so you just go — but I don’t want to play that half court basketball like that. I want to get up and down. But it wasn’t me slowing it down. But if my point guard wants to slow it down, or Charles or Muhammad wants to slow it down a little bit, then they slow it down. I tried to speed it up. I thought it was fine. Again, this team plays at one of the faster paces in the league. Our OER is really good, their OER. But their pace is a little different than us. We want to play at a pace to keep people from getting to their number and their scoring average.