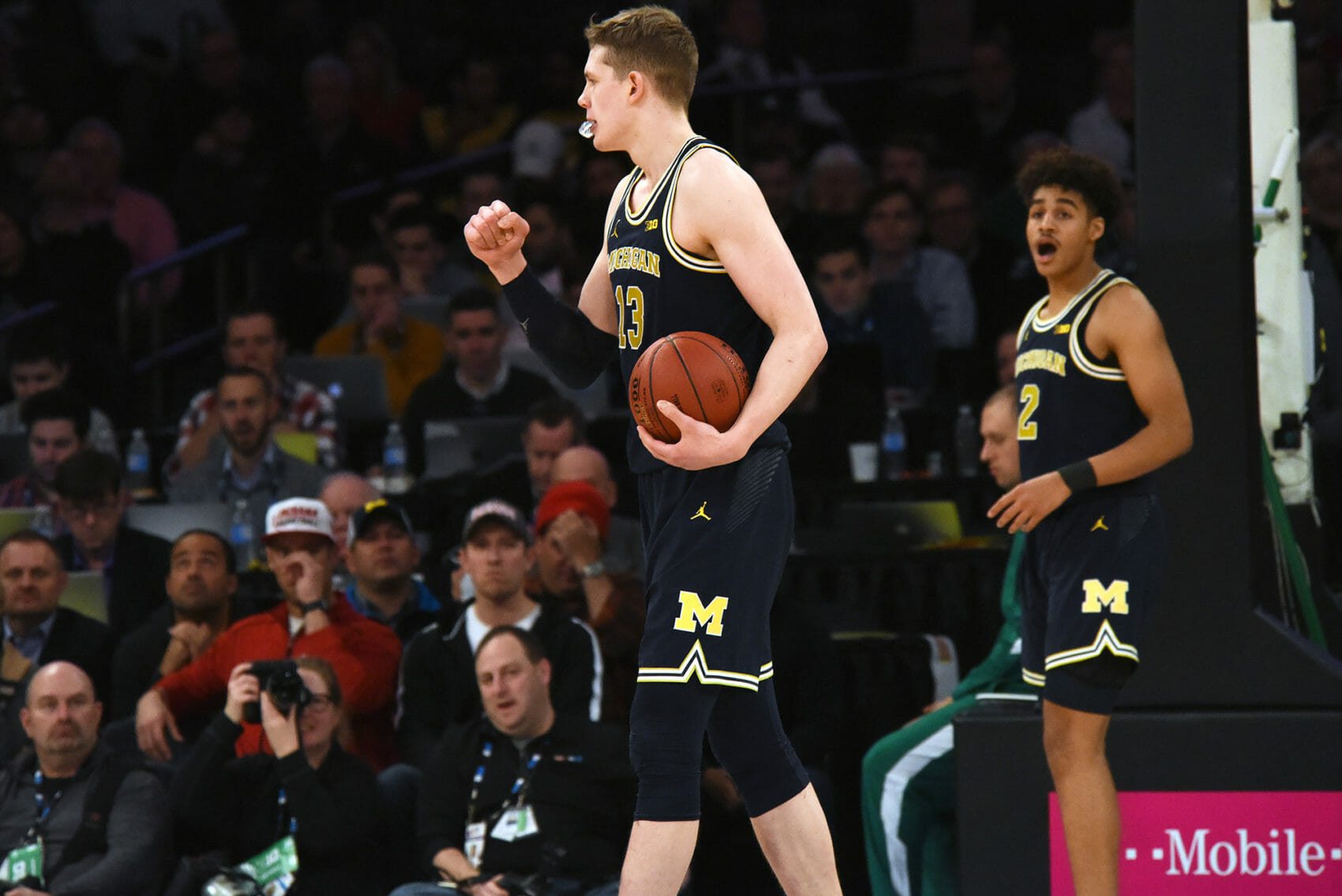 Michigan and Michigan State will get their rematch after all. Here’s what to watch for on Saturday afternoon.

In the final season that Michigan and Michigan State weren’t guaranteed to play at least twice, they’ll get their chance at a grudge match in New York City (2:00 p.m., CBS).

The Spartans haven’t lost since Michigan walked out of the Breslin Center with a victory on January 13th. Michigan has won 7 games in a row and has mercilessly been putting an end to every bubble resume in the Big Ten.

Since February 7th, Michigan grades out as the 2nd best team in the country by adjusted efficiency margin. Michigan State grades out two places behind at No. 4. These are two of the hottest teams in the country — not the conference — and the bitter rivals are now on a collision course with a trip to the Big Ten Tournament Championship Game on the line.

The Spartans are ranked 1st or 2nd in eFG%, offensive rebounding rate, free throw rate and 3-point field goal percentage in league games. They are great posting the ball up, run great halfcourt sets and are lethal in transition. In the last preview, I outlined the Spartan offense in this flow chart:

It is no secret what Michigan State is going to do, it just isn’t always easy to stop it.

On defense, Michigan State protects the rim as well as any team in the country. Big Ten teams only make 43% of their shots within five feet of the basket against Michigan State and they lead the country in 2-point field goal percentage defense, eFG% defense and block rate. 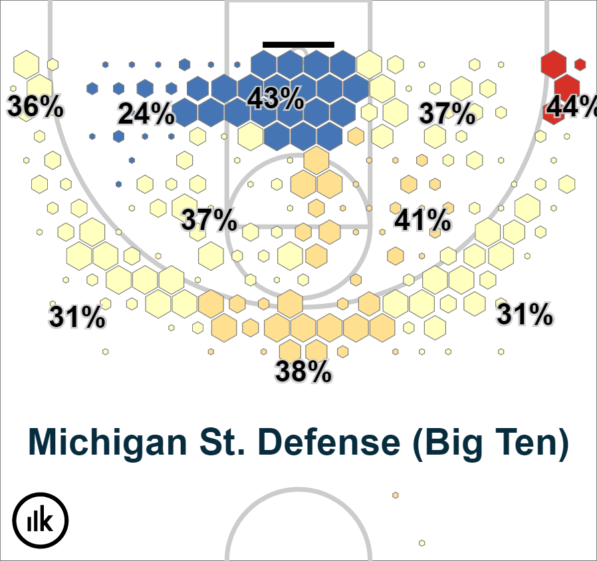 The Spartans are solid on the defensive glass and generally keep opponents off the free throw line. The one thing they don’t do is force turnovers. Michigan State is ranked last in the Big Ten in forced turnover rate and 346th nationally. The Spartans have a bunch of length, but it is all inside and they don’t extend to try to force giveaways on the perimeter.

Sophomore forward Miles Bridges is averaging 17 points and 7 rebounds per game while shooting 54% on twos and 37% on threes and if you listen to some pundits you would be convinced he was having a disappointing year. I think there’s a faction of people out there who wants Bridges to be something that he isn’t, but what he is still a very dangerous college basketball player. Bridges is great spotting up from the perimeter and has a tremendous chemistry with Winston. He loves to drive baseline and then find a cutting big man, something that Michigan did a great job of negating in the first meeting.

Jaren Jackson‘s best basketball is ahead of him, but his present day format is still dominant in spurts. Jackson is a knock down 3-point shooter, an elite shot blocker and a great finisher around the basket. He has the skill to score with his back to the basket or drive past a slower defender and finish at the cup. His biggest problem has been staying on the floor and out of foul trouble. He’s been whistled for 5.8 fouls per 40 minutes and has only played more than 30 minutes in a game once this season.

Sophomore point guard Cassius Winston is one of the most gifted offensive players in the country. Winston is ranked 11th nationally in eFG%, 3rd nationally in assist rate and 2nd nationally in 3-point shooting percentage. His shot chart is borderline ridiculous and he makes over 50% of his 3-point attempts on the season.

But he also had just 2 assists to 4 turnovers with 11 points on 3-of-8 shooting in the first meeting. Zavier Simpson embraced the individual matchup and clearly got the best of it in that meeting, frustrating Winston with his quickness and defense.

Izzo’s assessment of the situation after the first meeting was “as the head goes, the body goes with it,” and it is tough to disagree. Simpson won that battle and set the tone of the game. There’s a personal feel to that head-to-head matchup and Simpson has been locking up many of the league’s best lead guards all season.

Sophomore guard Joshua Langford is a great 3-point shooter who loves to take mid-range jumpers. Langford is a good mid-range shooter, but he’s a better 3-point shooter and those shots are worth more. Teams will gladly trade pull-up jumpers for 3-point attempts and they key is to run Langford off the line and defend the sets that will get him looks off of screens to force him to take those lower value shots.

Big man Nick Ward is one of the best post-up scorers in the conference. Wagner has got the best of Ward in their head-to-head matchups and Ward had just 4 points on 2-of-5 shooting with 3 turnovers and 4 fouls in 14 minutes in the game in East Lansing.

Matt McQuaid ends up with additional playing time when Michigan State goes with its small look late in games and he hit a dagger three to knock off Wisconsin on Friday. McQuaid shoots 40% from 3-point range and attempts 79% of his shots from beyond the arc.

Reserve big man Xavier Tillman played more minute than Gavin Schilling in the first meeting, but I’d expect to see those numbers switch. Schilling is a more versatile defender and seems like he should be a better match for Wagner.

The biggest question entering Saturday’s rematch is whether Michigan State will make an adjustment in its ball screen defense.

The Spartans stuck to their guns in the first meeting, leaning on their normal options at the five to hedge ball screens and attempt to contain Moritz Wagner on the perimeter. Wagner responded with a monster 27 point performance and famously left Nick Ward on the ground as he drove past him for an easy layup.

The catch to the situation is that Jaren Jackson Jr. is one of the most gifted defensive big men in the country. He’ll be picked in the NBA Draft lottery in June because of his defensive versatility and the fact that he can step out and switch onto a ball screen or defend the rim. Against Michigan, he spent the majority of his time stuck to Duncan Robinson or Isaiah Livers in the corner of the floor.

Since that game, Michigan State has started to utilize a small ball lineup in crunch time. They played with a Miles Bridges-Jaren Jackson combination at the 4-5 for most of the final five minutes of their last two games against Wisconsin and have seen some success there. The issue is that Jackson has been prone to end up in foul trouble this season and that there isn’t a lot of perimeter depth to plug the gaps and push Bridges up to the four.

If Michigan State was just average in the turnover department on both sides of the ball, it might be undefeated. The Spartans do everything else well offensively, but they surrender a few possessions in every game from the turnover column.

Michigan needs to force some Michigan State giveaways and turn them into easy offense. It also needs to negate Michigan State’s transition game. The Spartans run off of everything from makes to misses and steals. That puts a certain sort of pressure on a team because you don’t see it very often whether it is Nick Ward running straight down the floor to the rim or Josh Langford leaking out on the wing.

Michigan has had issues with fouls this week in New York City and Michigan State gets to the free throw line more often than any other team in the conference. Two quick whistles against Moritz Wagner could send Michigan’s gameplan into disarray and all involved parties are aware of that fact.

The last time these two teams met in the Big Ten Tournament, the 2014 Championship Game, Jordan Morgan was whistled for two quick fouls and Beilein was assessed a technical and then the game quickly spiraled out of control.

KenPom likes Michigan State by a final score of 69-65, but gives Michigan a 38% chance at the neutral court upset. A Michigan win would raise some serious seeding questions and could give the Wolverines at least an outside shot of staying home in Detroit for the first week of the NCAA Tournament.