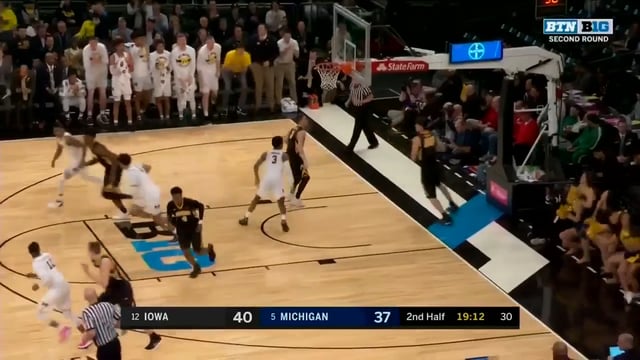 Before Thursday’s matchup, John Beilein had never lost the opening game of the Big Ten Tournament as head coach of the Michigan basketball team.

That still holds true — though the Wolverines came very close to suffering what would’ve been a seed-changing blemish.

“We fought through adversity,” said Zavier Simpson. “There were some tough calls out there. We just wanted to stick together, keep playing hard and keep playing smart. That’s what we did, and we’re just glad to come out with the victory.”

In terms of offensive play, the first half was one of the weirdest the Wolverines have had in a long time. Michigan did not hit a 3-pointer in the first 20 minutes, instead scoring the vast majority of its 35 first-half points in the paint, carrying a five-point deficit into the break.

But it didn’t take long for the Wolverines to blow right past the Hawkeyes and regain the lead.

In a two-minute stretch, Michigan ripped off an 11-0 run with a variety of finishes in the paint. Moritz Wagner backed down Luka Garza and finished with his left hand. Then Zavier Simpson went straight down the lane in transition, Charles Matthews finished off a Wagner feed out of a double team and Isaiah Livers had an emphatic dunk. Wagner finished the run with an and-one off a baseline dunk.

The run screeched to a halt, though, when Muhammad-Ali Abdur-Rahkman picked up his third foul. A couple possessions later, Wagner picked up his third, while Matthews and Simpson had the whistle blown on them as well. Whereas Michigan had appeared poised to blow the game wide open, Wagner and Abdur-Rahkman’s foul trouble slowed their team’s roll. The Hawkeyes would hang around the rest of the game.

After a pedestrian, scoreless first half, the Big Ten’s newly-crowned Sixth Man of the Year made his mark past the midway point of the second half. Following a three-point play from Iowa’s Ryan Kriener that cut Michigan’s lead to two, Robinson drained a 3. A few possessions later, Robinson flared back out toward the line and drained another.

With his top two options limited all game by foul trouble, Beilein needed other players to step up. Matthews did, with a game-high 16 points. Simpson chipped in 12.

But it was Robinson’s shots that would pack the most punch throughout the tightly contested second half.

“Every (3-pointer) was a playcall for him,” Beilein said. “That’s tough, when you say, ‘Here’s what we’re running. All eyes are on you. Execute it and then knock it down while you’re running away.’ Those three that he hit … that’s seniors who do things like that.”

With a six-point lead and just over one minute remaining, it looked like Michigan had a solid grip on the game.

But things turned quickly. Iowa’s Nicholas Baer hit a 3. Then Michigan was whistled for a five second violation while inbounding the ball. Half a minute later, Abdur-Rahkman — a 78 percent free-throw shooter — missed the front end of a one-and-one.

And with 19 seconds left, Jordan Bohannon made Michigan pay for all of its mistakes, drilling a deep 3 that sent his bench into hysterics.

The Wolverines made just two of their first 18 attempts from beyond the arc. Robinson was responsible for both makes — and he would be responsible for the third, on Michigan’s 19th attempt.

At the halfway point of overtime, Iowa nursed a one-point lead while both offenses seemed to have stalled. Then Robinson changed directions and came flying back toward the key, using a screen from Jon Teske. Matthews fed Robinson the ball, and all of Madison Square Garden watched as the fifth-year senior connected over Garza’s outstretched hand.

“It was a great play called by Coach (Beilein) and (Simpson),” Robinson said. “It’s a good screen by Jon and a good pass by Charles. And it all stems from my teammates and coaches, giving me confidence to step in and take that shot in the first place, and today fortunately enough I was able to make it.”

When Wagner fouled out with 4:38 left in regulation, that meant his backup, Teske, would see some major minutes.

Teske’s offensive game is fundamentally different from Wagner’s. The sophomore isn’t much of a pick-and-pop threat.

He did, though, serve as a very capable stand-in on the glass for Wagner, the team’s leading rebounder.

Down the final stretch of overtime, as each team served up bricks, Teske was there to clean everything up and limit Iowa’s second chances. He vacuumed up boards off misses from Bohannon, Cook and Garza.

He was fouled after that last rebound — and missed both free throws.

That wouldn’t be a problem again, though. After Isaiah Moss missed a 3, Teske tapped the ball to his teammate Robinson, a 92 percent free-throw shooter who calmly sank both and iced the game.

“We knew (we had) to step up,” Teske told Ethan Sears, “box out and go get those rebounds.”