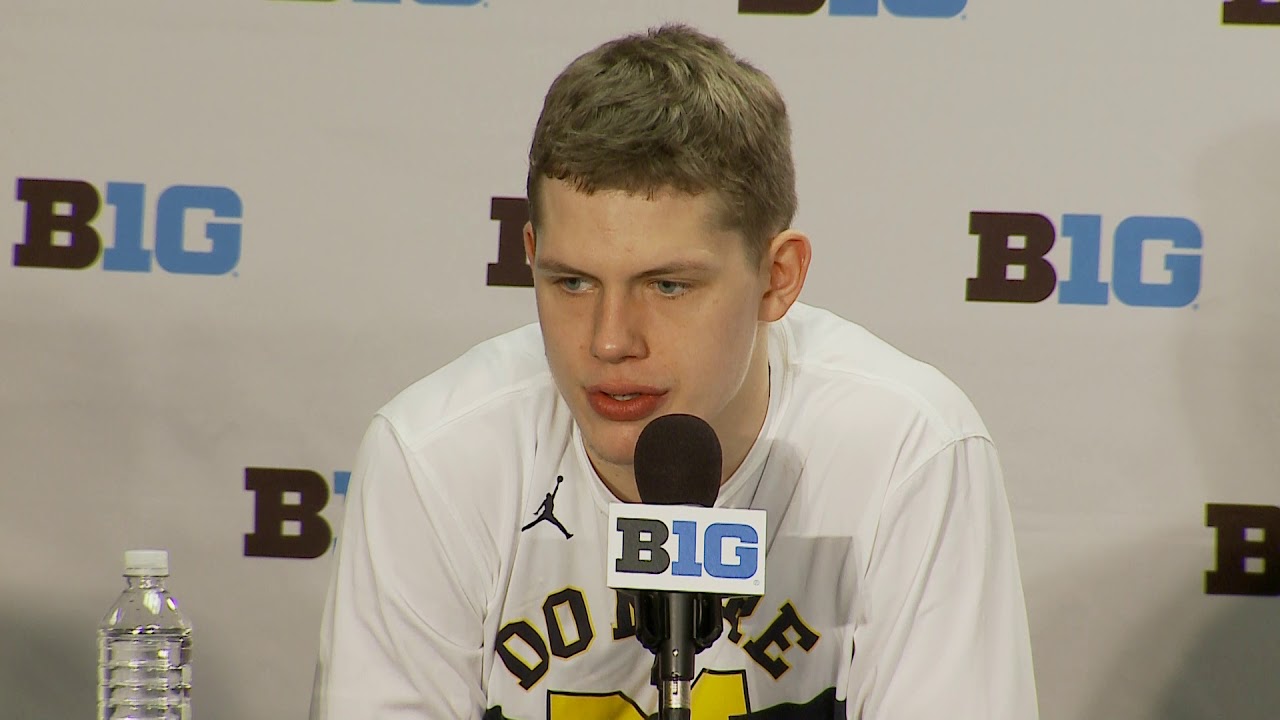 John Beilein was on the podium with Moritz Wagner, Duncan Robinson and Muhammad-Ali Abdur-Rahkman after a Big Ten Tournament win over Nebraska.

John Beilein was on the podium with Moritz Wagner, Duncan Robinson and Muhammad-Ali Abdur-Rahkman after a Big Ten Tournament win over Nebraska.

THE MODERATOR: Coach, an opening statement.

COACH BEILEIN: I’m not taking credit away from Iowa and certainly from last night, but I think it’s really hard — I think the team that’s already played here once has a real advantage when you can’t shoot around, you can’t do anything, you walk in, sort of been there. So I don’t know if that’s what happened with Nebraska today, but I know we were really good because we’ve been here yesterday and played a really tough Iowa team. And so I’m just thrilled with the win. Thrilled for our kids. This reminded me very much of like our Penn State and our Maryland games where we just were hitting on all cylinders and a lot of things on both offense and defense. And the defense, you look at the numbers right now, our defense was not good; it was great.

Q. Does this run feel anything like last year seeing how you got to DC, but just how you’re playing right now?

DUNCAN ROBINSON: I think there are some similarities. Obviously there’s some different personnel. But the guys that have been through it, we know what it’s like to get hot at the right time, and we feel like we’re playing well right now. Obviously we definitely have some work we still need to do. But right now we’re just focused on, first of all, recovering from today’s game but learning from it and then also getting ready for tomorrow.

Q. For each of the players, everyone talks about the Michigan-Michigan State rivalry in football; it’s known as “the game.” How would you describe the rivalry in basketball and what do you think tomorrow’s going to be like?

MORITZ WAGNER: To be honest with you, I’m going to enjoy this win for another 30 minutes to an hour and then I’ll probably think about tomorrow. Michigan State is a very good team that deserves to win the Big Ten Championship the way they play. So it’s on tomorrow and it’s a great team.

DUNCAN ROBINSON: Similar to what Moe said. We’re just going to enjoy this one right now and learn from it. And obviously at the same time it’s an in-state rival, we have a lot of pride and we’re going to come out and compete. And I’m sure they’ll do the same.

MUHAMMAD-ALI ABDUR-RAHKMAN: Like they were saying, it’s a rivalry game even though it’s postseason you want to come out and have a sense of urgency and be ready for a fight.

Q. Duncan, ever since the Wisconsin game you’ve been shooting 55 percent from long range. What have you been doing differently since then to start hitting from there?

DUNCAN ROBINSON: Nothing in particular. I think a lot of it was just mental. Found myself in a situation where my time in a Michigan uniform is running out. You heighten your sense of urgency when you realize that. And I think it’s just been my mental approach and just trying to be aggressive, and I get a lot of that from my teammates and coaches as well from their encouragement.

Q. Moe, you had one of your best games of the year against Michigan State. They obviously have a bunch of big-time prospects. What do you think went well for you in that first game? And what do you think you maybe have to do different against them this time?

MORITZ WAGNER: I mean it doesn’t really matter, to be honest with you, who is going to have a good game. I think that day I think things just worked out the way — our offense, kind of pick your poison a little bit. And it was my day that day. I’m not trying to focus on that too much because it doesn’t mean tomorrow. We’re playing in the semifinals for a Big Ten Championship. And January 13th or whatever it was doesn’t mean anything tomorrow. Yeah.

Q. You would expect them to be extra motivated after how well you played against them?

Q. Moe, after fouling out yesterday, did you change your approach at all defensively?

MORITZ WAGNER: Yeah, I mean, I can’t start the first half with a dumb foul on the ball screen, I can’t do that. And then I just hurt my team. And obviously that was topic in team meetings in the last 24 hours. So I feel a certain responsibility to help my team out there and not do that dumb stuff.

Q. Duncan, Coach Beilein talked about how you guys were not good but great defensively, that’s been a mark of your team throughout the season. What’s been the biggest thing in terms of becoming such an elite defensive team now?

DUNCAN ROBINSON: I think pride, first and foremost. At least in my time here, I feel we’ve been always criticized for not getting after it at that end. But this team has just completely transformed that mentality. To be honest with you, I think it starts with Zavier. He brings it every single game and every single day in practice and raises everybody’s level. When you have veteran guards like Muhammad and Charles, and Moe’s improved so much as well defensively, I think when we come together and stay connected on defense, it makes all the difference.

Q. Muhammad, you mentioned yesterday, the game in Lincoln, you guys just didn’t respond very well to their defense, maybe doing some switching you guys didn’t adjust to, what was different today that worked so well that didn’t work in Lincoln?

MUHAMMAD-ALI ABDUR-RAHKMAN: I think we just seen it a lot more. As of late, teams have been trying to switch out their defenses against us. And I think we were just more comfortable with it today and we just picked our poison within our offense and found open shots in slots.

Q. Coach, it’s been some time now since you played State last. Do you see anything different about this team going into tomorrow that’s just different?

COACH BEILEIN: From our team?

Q. About State, is State any different?

COACH BEILEIN: I haven’t watched one bit of their game. The last time I watched them was whenever we played them. I have no idea. I’ll start that now. Just focus on the next game. You can’t go around just watching games on TV in our business. You have to stay on the next opponent; you might watch that game three or four times. I wish I could help you with that.

Q. Are you going to watch basketball next week when you’re trying to figure out how to kill that extra week?

COACH BEILEIN: You know, if the NCAA Tournament — I think we’re in good shape. But it’s going to be interesting because it’s up to 10 days. But I will probably watch some things. But I’ll be more focused on what can we do; try to put all the things who we could be playing, whether work on our zone offense, people switching against us. That’s what we did on Monday. We worked 24 minutes on people switching against us thinking that Nebraska could be doing that if we got there. Then we didn’t talk about Nebraska again. So I’ll probably do some of those things, maybe look at some of those charts, see some possible opponents, see if somebody is a little strange with what they do and get a head start, but more than that I’ll just try and make our team better on simple things, shooting, cutting, passing.

Q. From a physical standpoint, is this the best defensive team that you’ve had since you’ve been here? And when Duncan was asked about the defense a minute ago, he mentioned Zavier Simpson and being important in transforming your identity on that end. What would you point to in terms of one thing that’s been key to your success on that end of the court?

COACH BEILEIN: I think one of the things it helped us last year a lot was having — the 4-man and the point guard are really key defensively right now because of all the ball screens set by the 4-man here and there. That young man right there much maligned by his defense by probably all you and me has been a huge — Duncan has been a huge development, playing with more toughness more resilience, really trying to make a difference at that end of the floor. So that’s been a big key. But there’s no question that Zavier, right, that’s what he does. That’s his mark. He works on his all other games, all the areas of his other games, all these finger rolls he’s been working on and things like that. He sets the stage. When they come through the front door and they meet Zavier, they know they’re in for a tussle. And all of our other guys sort of feed off that. Muhammad is really good too. Two really good defensive guards.

Q. How do you think Moe is different now compared to this point last year?

COACH BEILEIN: Rebounding. It’s an exceptional difference. I mean, his timing, it was all off. He didn’t go get the ball. He didn’t necessarily box out. For him to get 13 rebounds today is exceptional. And that’s been — that’s one of the things that I think if he’s going to play in the pros one day, that was one of the things — he’s a stretch 4 at that level. Stretch 4s have to, they certainly have to rebound. And he’s really shown some great growth there.

Q. Last night you guys missed, I think, your first 11 or 12 shots from beyond the arc. Tonight was a different story. Was that an emphasis or just kind of fell into place?

COACH BEILEIN: I think that once you get a little bit more comfortable when you’re here, it’s a different ball; it’s a different arena. We did come over and shoot around ahead of time and it didn’t seem to make a difference yesterday. It’s really made a difference today. But that’s the way we’ve been a little bit. There’s one guy, like today it was — Duncan has been on fire for about a month. But Muhammad couldn’t make them yesterday. J.P. couldn’t make them yesterday. And Duncan made just enough. Today there were several people doing that. So been having a lot of shooters for a lot of years. You try to stay calm and they’ll come back to the mean all the time.

Q. Coach Miles commended your defensive effort today, specifically closing out ball screen defense, what are you looking to carry over from today into tomorrow’s game?

COACH BEILEIN: Michigan State’s got a tremendous ball screen offense as well as some — Tom’s got tremendous system of things countering off each other, unless they’ve changed since the last time we played them. But one of the big things is you’ve got to be able to guard the ball screen. Moe has been really exceptional at that. That was not his strength for two years. He’s really impacting people. And getting — recovering back to his man. So it’s going to be a challenge again tomorrow. But we’re better defensively than we were back then. But they’re probably better offensively. So who knows what’s going to happen.