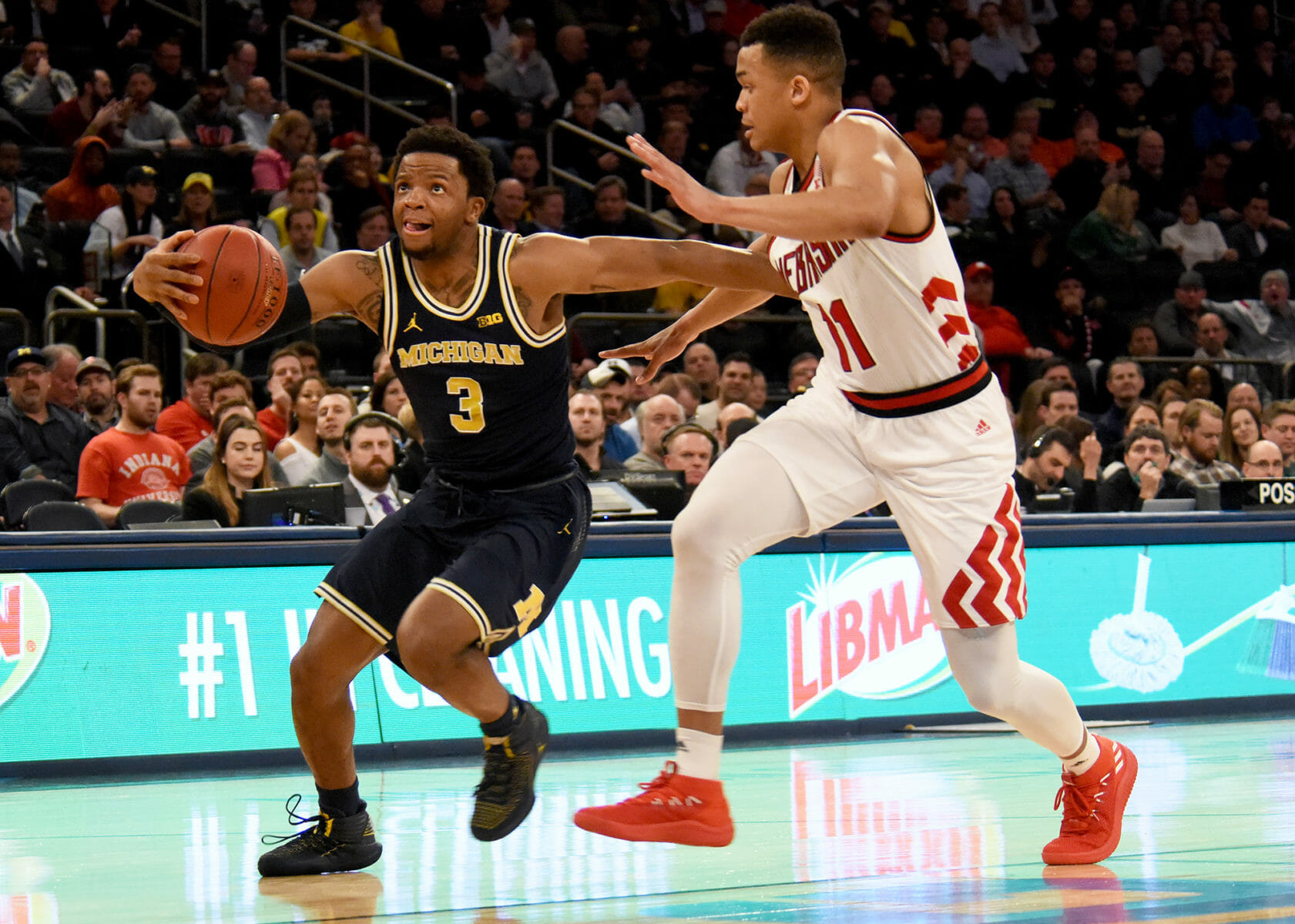 Here are Five Key Plays from Michigan’s win over Nebraska.

It took just under two minutes for Moritz Wagner to score more points against Nebraska on Friday afternoon than he had in the entirety of Michigan’s first matchup, a 20-point loss, against the Cornhuskers.

Wagner’s quick start boded well for the Wolverines’ chances against Nebraska. So did Muhammad-Ali Abdur-Rahkman’s hot shooting, Duncan Robinson’s continued excellence and the entire team’s defensive effort. Michigan got the better of the Cornhuskers in the rematch between both teams. Now the Wolverines will be on the other side of things, as Michigan State looks to do the same in the Big Ten Tournament Semifinals. Here are five key plays from Michigan’s 77-58 win over Nebraska:

It didn’t take long before the Wolverines grabbed the lead for good. An 11-0 run that took place between 15:03 and 12:33 of the first half turned a 9-5 deficit into a seven-point lead. After Nebraska opened with some hot shooting, including a baseline jumper from Glynn Watson Jr. and a 3 from James Palmer Jr., the Cornhuskers went cold — which Michigan took advantage of.

Wagner, who scored Michigan’s first eight points, drained a 3 to start his team’s run. Then Nebraska lost Muhammad-Ali Abdur-Rahkman in transition, and he hit his first 3. Duncan Robinson ball-faked a defender before hitting one too, before finishing off a fastbreak started by a Jon Teske block and outlet pass.

The quick start portended good things from Michigan’s current version of the ‘Big Three.’ Abdur-Rahkman and Wagner, who were limited by foul trouble against Iowa, led the team with 21 and 20 points, respectively. Robinson was close behind with 16.

Most tellingly, the Wolverines didn’t struggle when the Cornhuskers switched screens. That was the story of the first game between the two teams.

“I think we (have) just seen it a lot more,” Abdur-Rahkman said. “As of late, teams have been trying to switch out their defenses against us. And I think we were just more comfortable with it today and we just picked our poison within our offense and found open shots in slots.

Michigan would only extend its lead before halftime. A crucial offensive rebound from Ibi Watson, who played seven minutes off the bench, and a botched Nebraska switch gave Abdur-Rahkman an open 3 from the top of the key. Zavier Simpson pushed the tempo and earned an easy layup, before rifling a pass to Wagner in the paint for a wide-open dunk. The Cornhuskers came out of the resulting timeout in a 1-3-1 zone — only to immediately give up another offensive rebound and watch Robinson hit another 3.

The barrage was just another sign that Michigan’s early shooting struggles against Iowa had not carried over to the next round.

“But that’s the way we’ve been a little bit. There’s one guy, like today it was — Duncan has been on fire for about a month. But Muhammad couldn’t make them yesterday. J.P. couldn’t make them yesterday. And Duncan made just enough. Today there were several people doing that. So been having a lot of shooters for a lot of years. You try to stay calm and they’ll come back to the mean all the time.

Nebraska didn’t go quietly. A 9-1 run to end the half cut its deficit from 18 to 10. The two teams went back and forth for the early part of the second half, before a free throw from Palmer cut Michigan’s lead to seven.

The Wolverines responded quickly. Jordan Poole found some space off the dribble and dished to a wide-open Abdur-Rahkman, who hit yet another 3. Wagner shook off a defender with a pump fake before finishing with his right hand at the rim, and on the next possession Robinson hit a 3 after being left open in the corner. Simpson put the finishing touches on what would be a 10-2 run by stopping on a dime, crossing over and finishing off his opposite leg.

Robinson and Abdur-Rahkman weren’t done from the perimeter yet, though. After Watson made his team’s second 3 of the game at the 6:58 mark, Robinson responded 15 seconds later with a 3 of his own, his fourth of the game. Then Abdur-Rahkman added one on Michigan’s next possession, forcing a timeout from Tim Miles. At that point, the Wolverines had their biggest lead of the game at 19.

“This reminded me very much of like our Penn State and our Maryland games,” Beilein said, “where we just were hitting on all cylinders and a lot of things on both offense and defense.”

Robinson and Abdur-Rahkman were lights out from deep all game long. Robinson shot 4-of-7, and has now shot 50 percent or better from 3 in six of the past seven games. Abdur-Rahkman, meanwhile, was 5-of-5 from 3, continuing his recent stretch of torrid offensive play.

On the season, Robinson and Abdur-Rahkman are now shooting 39 and 37 percent, respectively, from deep.

“I think a lot of it was just mental,” Robinson said when asked about his recent hot shooting. “Found myself in a situation where my time in a Michigan uniform is running out. You heighten your sense of urgency when you realize that. And I think it’s just been my mental approach and just trying to be aggressive, and I get a lot of that from my teammates and coaches as well from their encouragement.”

After some late-game woes — including some shaky free-throw shooting — allowed Iowa to force overtime, Michigan would not make the same mistakes against Nebraska. The closest the Cornhuskers got down the final stretch was 12, after a Watson 3, before the Wolverines iced the game away at the free-throw line.

Abdur-Rahkman hit a pair — but perhaps more surprisingly, both Simpson and Matthews (54 and 48 percent on the season) were 4-of-4. In total, Michigan went 10-of-11 on free throws in the final four-and-a-half minutes of the game, shutting the door on an increasingly desperate Nebraska team.