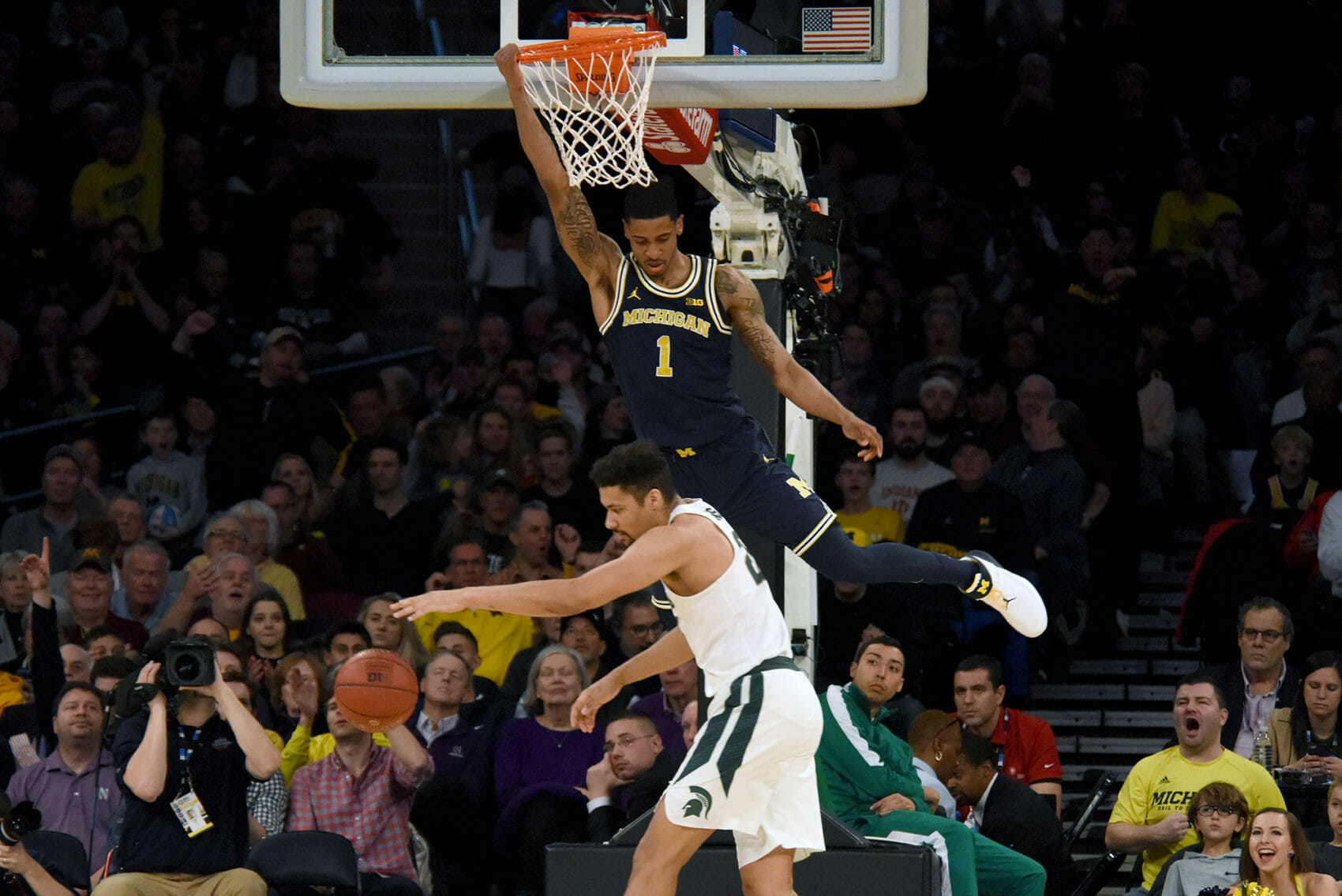 Charles Matthews drew the toughest defensive assignment of the day and came away the victor.

Though Miles Bridges led the Spartans in scoring in what ended up a 75-64 Michigan win, he did so on 7-of-18 shooting, as Matthews contested nearly everything Bridges had to offer. Even as Bridges was keeping the Spartans in the game during the second half, Matthews quelled his momentum by forcing a miss in the post.

Matthews made just one mistake all game: a transition turnover with two minutes to go that led to a Matt McQuaid triple on the other end — a five-point swing that brought the Spartans within eight and gave them some temporary life.

Other than that, it was one of the better games Matthews has played all season. Not only did Matthews keep Bridges in check, he scored 15 points of his own, along with six rebounds and three assists.

Matthews has struggled to create off drives lately, starting and stopping like the motor of a 20-year old car. On Saturday, he was decisive, dunking off a straight-line drive coming off a Jon Teske screen one minute, then kicking out to Duncan Robinson for a triple the next.

“It always (feels) good to see the ball go in the basket again,” Matthews said. “… I knew it was gonna come, I trust the process and there were times (where) I just wanted to come across half-court and shoot the ball. (But) you know what, we play Michigan basketball and (we’re) successful doing this.”

Keeping the Spartans off the offensive glass was a nightmare for Michigan in the first half. Michigan State came into the break with a 35 percent offensive rebounding rate and eight second chance points, buoyed by four offensive boards from Jaren Jackson Jr.

Back in January, the Wolverines excelled in the same area, holding Jackson without an offensive rebound at the Breslin Center. The first half was 180-degree flip.

“They got penetration,” said John Beilein. “They had a couple shots go their way, but they were crashing from the weak side, doing some things. While they were shooting, they were sneaking behind us.”

The Spartans took a three-point lead into halftime and it should have been more given the 31 percent field goal percentage Michigan had at the break.

On the other side of it, the game reverted back to that Saturday in East Lansing. Jackson went without an offensive board. Other than Miles Bridges, so did every other player in green and white.

“I was doubling (Jackson) and he was getting wide open offensive rebounds,” Livers said. ” … We stopped doing that, just focused on getting him out of the paint so we could get the rebound and run.”

Michigan finished the game with a 77.5 percent defensive rebounding rate, even better than the first time around against Michigan State.

Without second-chance points, the Spartans had no choice but make their shots. They didn’t, shooting 40 percent from the field in the second half — just eight made shots coming from players not named Miles Bridges.

The result? Well, all you have to do is check the box score.

With just under three minutes to go and Michigan hanging onto a five-point lead, the shot clock wound down and the Wolverines had nothing to show for it. The ball found Abdur-Rahkman, who had little choice but to pull up, despite having missed two 3-pointers in similar fashion back in the first half.

Initially, this one didn’t look good either, drawing iron.

Turns out, the rim at Madison Square Garden is forgiving. After bouncing in and out, the ball bounced in again and through the net. Suddenly, a five point lead became eight.

“I just heard a thud,” Beilein said. “I didn’t even see it. … I heard a thud and then I heard everybody, like, cheer.”

“I thought it was gonna swish,” Abdur-Rahkman said, “but it hit the back of the rim and rolled in. I’m still as happy”

The senior wasn’t done yet though. On the ensuing defensive possession, Abdur-Rahkman stripped the ball away from Bridges, keeping the momentum rolling as Duncan Robinson egged on an already exploding Madison Square Garden crowd with a fist pump.

“I saw that Miles was playing a little bit too aggressive and just trying to fight for position and got high on his elbow,” Abdur-Rahkman said. “Stops like that is just, lights the building on fire. Brings energy.”

Abdur-Rahkman has been Beilein’s go-to late in games all year. We saw it in the first game against Maryland, then again against Minnesota. His heroics weren’t at the buzzer on Saturday, but they were decisive nonetheless.