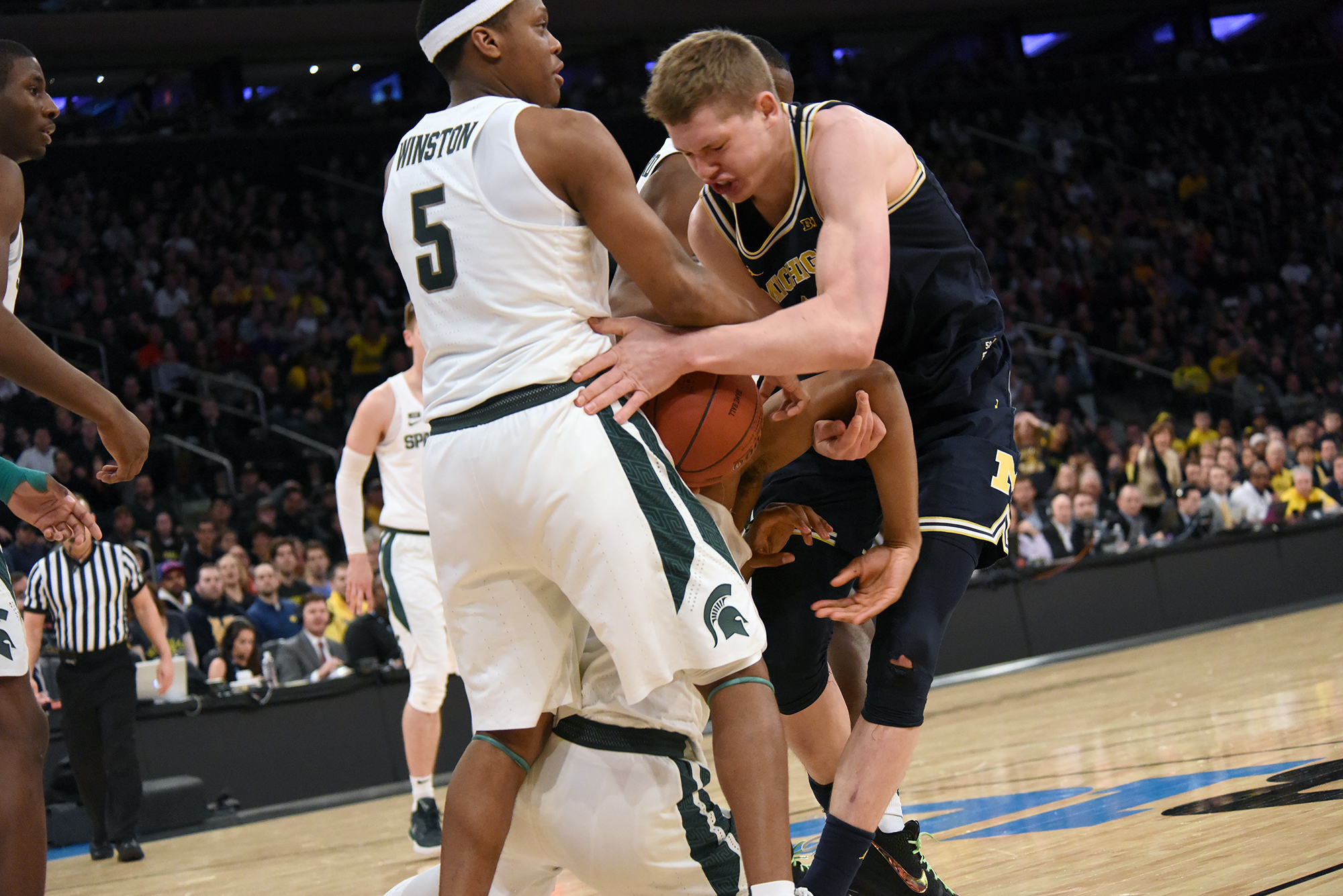 The first scuffle came just four minutes into the game.

Charles Matthews flew in to block Nick Ward, knocking him down in the process, and the sophomore didn’t take it in kind. In a moment that will live in Twitter fame, Matthews cracked a smile and laughed as Ward bolted up and started jawing.

There was another dust-up minutes later and, every chance they got during their 75-64 victory, the Wolverines egged on the Madison Square Garden crowd.

It was a physical game, and emotional one. The two bled into each other like a red shirt into white.

“I didn’t want it to get into the thing where we’re getting guys kicked out of the game or chippy or whatever, but like I said, our guys are tough,” said John Beilein afterwards. “Just because we don’t talk about it a lot, you know, we let our game do our talking all the time.”

It wasn’t just a trip to the Big Ten Tournament final at stake for Michigan, it was rivalry, both personal and institutional.

Michigan’s locker room featured a crowd of reporters and camera crews, a brief spell of loud music and a general sense of accomplishment.

The Boilermakers’ was workmanlike after their 78-70 win over Penn State. For them, it was onto the next one, a final against a team they’ve pulled out close wins over twice already this season, thanks to offensive firepower that had Beilein throwing his hands up back in January.

In front of a vibrating Mackey Arena, Michigan dropped 88 points that night — still its best offensive performance against a Division I program by points per possession all year — and lost.

The Wolverines, who now rank sixth in adjusted defensive efficiency, had no answer for the Boilermakers’ system of keeping four 3-point shooters outside the paint and forcing defenses to choose between guarding them or 7-foot-2 behemoth Isaac Haas in the post. Michigan got the worst of both worlds in West Lafayette: Haas dropped 24, putting in hook shots over Moritz Wagner as easily as someone grabbing a book off the top shelf, while Purdue shot 55 percent from beyond the arc around him.

The Wolverines’ strategy in that game — and the previous affair in Ann Arbor — was to leave Wagner 1-on-1 with Haas, hope for the best, and try to shut down the Boilermakers’ 3-point shooting.

“Against Michigan, we just exploited the fact that being 1-on-1 in the post is, you know, an easy bucket,” Haas said on Sunday. “… Obviously, with size and strength that just allows for me to get wherever I want to go.”

His confidence wasn’t brash. It was the same confidence  you’d have saying two and two is four. I’m big. Scoring 1-on-1 in the post is easy.

The Nittany Lions tried a different route on Sunday, sinking a man in help defense to try and prevent Haas from going middle. He responded by going 6-for-9 from the field as Purdue rained down 11-of-21 3-pointers.

“You can’t guard him in the post,” Beilein said back in January. “The only way, you hope is if they don’t have good interior passing and Vince Edwards and (Dakota) Mathias are tremendous interior passers.”

It stands to reason then, that Michigan will stick with the status quo on Sunday.

The Wolverines are a better defensive team now then they were then. But Michigan has been a defensive-minded team all year and that didn’t make a lick of difference in the two games prior.

There’s no magic bullet here. Michigan isn’t going to stifle Purdue the same way it did Michigan State. The matchups don’t work in the same way. But the Wolverines are at least capable of slowing the Boilermakers down. 92 points isn’t an inevitability.

Zavier Simpson was nonchalant on what was then a potential rematch.

“I wouldn’t mind that,” he said, no doubt recalling that his defense helped hold Carsen Edwards to a 92 offensive rating — the worst of any Boilermaker — in the last matchup between them.

Simpson’s already great defense has been taken up a notch in the last three days. Ditto for Charles Matthews, and for that matter, pretty much everybody else.

Of course, the Wolverines probably won’t drop 88 again either. As good as Muhammad-Ali Abdur-Rahkman has been since then, the matchup in West-Lafayette was the best game he’s had all year, as the senior scored 26 points and swished through circus 3-pointers with the ease of after-practice layups.

“If you go back and watch the film, it wasn’t easy shots, fading away on the bounce,” Edwards recalled. “So I mean, anytime you can do that, I mean, you can get 26.”

He didn’t think there was any need at all for Purdue to change its gameplan defensively. Sometimes, shots just go in. The Boilermakers are quietly 26th in defensive efficiency. Scoring on Sunday shouldn’t be as easy for Michigan as it was six weeks ago, at least on paper.

Matching Saturday’s emotion will be close to impossible. The Wolverines will want revenge — and a banner — but this is no rivalry and there are no Cassius Winston-esque vendettas hanging over this game.

Whoever has the most left in the tank is getting a banner.