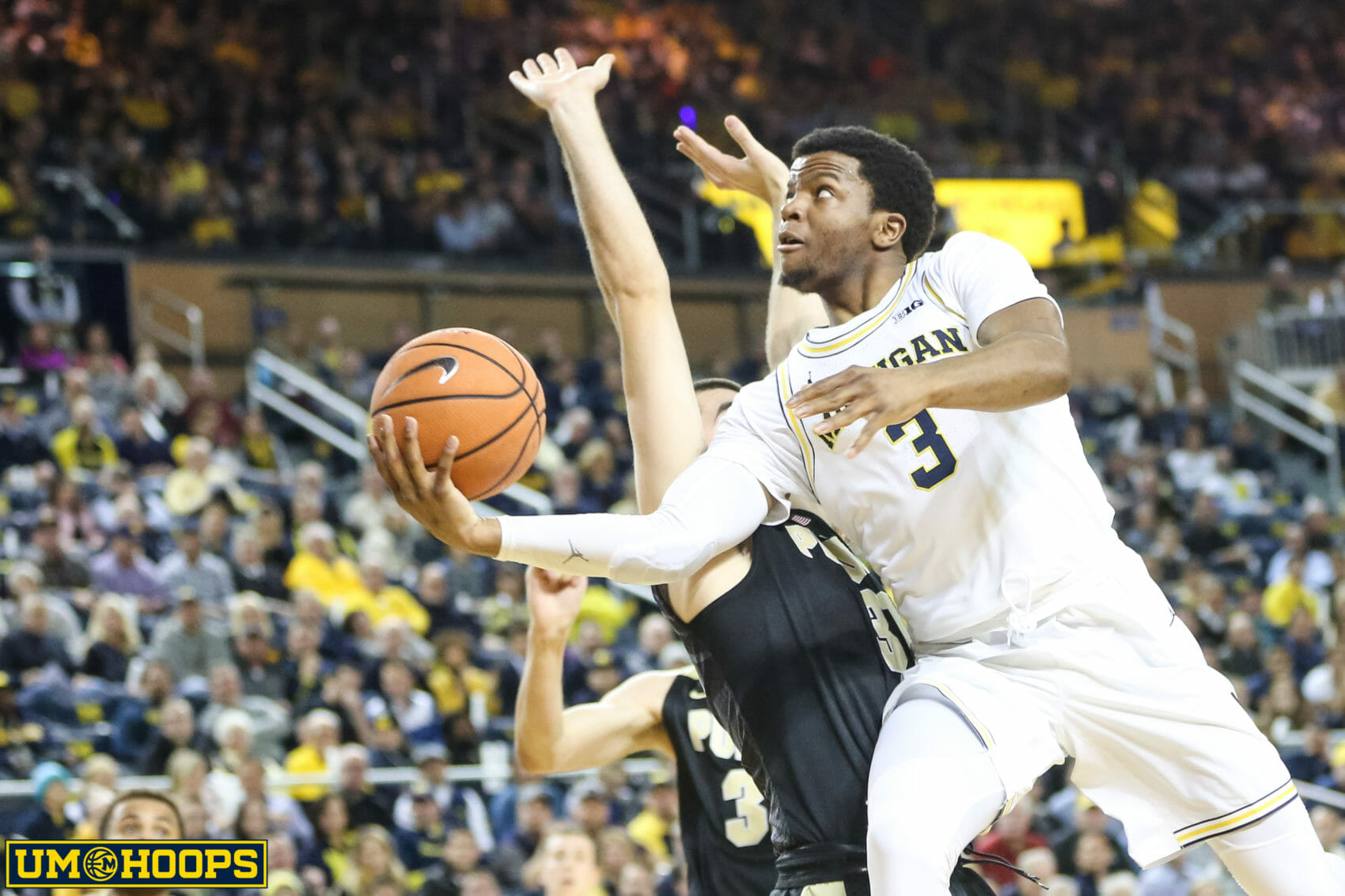 Michigan has at least one win over every team in the Big Ten this season excerpt for Purdue. The Wolverines avenged their other regular season blemish, Nebraska, in the Big Ten Tournament and now have a chance to claim a victory over Purdue in the conference tournament final.

The Boilermakers stole a game in Ann Arbor, Michigan’s lone home loss of the 2017-18 season, and then beat Michigan in a shootout in West Lafayette despite allowing the Wolverines to score 1.35 points per possession.

Michigan hasn’t beaten Purdue, but it doesn’t feel like it is far off either. The Wolverines and Boilermakers will face off one more time at Madison Square Garden with a banner on the line (4:30 p.m., CBS).

Purdue looked like the best team in the Big Ten for all but one week — a 3-game losing streak to Ohio State, Michigan State and Wisconsin — and finished the season with the best efficiency margin in the conference.  Matt Painter’s team appearing in the championship game doesn’t feel like a surprise, it felt inevitable after the season they had.

Here are four keys to the game.

Isaac Haas is the best post-up scorer in the country while Michigan’s post-up defense has consistently ranked near the bottom of Division I. The Wolverines and Moritz Wagner have been making incremental gains defending down low, but Haas scored 41 points on 17-of-28 shooting in two wins over the Wolverines.

John Beilein has consistently opted not to double team Haas due to the threat of perimeter shooters around him. Purdue has a plethora of 40+ percent 3-point shooters and will generally surround Haas with four of them at any one time. A double team to take away two points can easily lead to giving up three.

The problem with the strategy is that Michigan hasn’t been able to take away the 3-point shot either. Purdue went a combined 23-of-41 from 3-point range in the first two meetings.

How Purdue defends the pick-and-pop

Purdue’s post-up heavy offense is just as difficult for Michigan to guard as Michigan’s pick-and-pop focused offense is for Purdue to cover.

Wagner’s versatility has forced Matt Painter into a switch everything mentality, something that he’s rarely done throughout his career. While a team like Nebraska has a roster loaded with versatile 6-foot-8 jumbo forwards with positional versatility, switching everything doesn’t feel as close to the solution when it means sliding all 7-foot-2, 290 pounds of Isaac Haas onto Michigan’s guards and wings.

Back when these teams first met, Michigan was still figured out how to play against switching defenses. At that point, it felt like coaching malpractice not to switch every ball screen against the Wolverines. Michigan has made significant improvement in its ability to attack those looks by this point in the season. Muhammad-Ali Abdur-Rahkman has grown as a ball handler and creator while Zavier Simpson has perfected the blow by and wild hook shot near the rim.

It took hot shooting from 3-point range, but Michigan’s season-best 1.35 points per possession performance in West Lafayette didn’t really feel like a fluke either.

I’m not sure what the answer is for Purdue defensively and, whatever Painter decides, the opportunity is there for Michigan’s offense to have yet another big game.

Vince Edwards had an inconsistent finish to the regular season and missed time due to injury, but Purdue is different team when he’s making plays offensively.

It was Edwards who dominated Michigan in West Lafayette to the tune of 30 points n 9-of-11 shooting with 5 assists. He does a terrific job of playing off of post-up action and scores on an array of cuts, drives and slips to the basket. It doesn’t hurt that he can knock down the 3-point shoot either.

Edwards is a particularly tough matchup for Michigan because he takes away the matchup advantages that the Wolverines like to exploit against traditional fours. He’s more than capable of guarding Duncan Robinson or Isaiah Livers, but he can also switch onto Muhammad-Ali Abdur-Rahkman. This Purdue team is a better fit to play against Michigan this year because it replaced Caleb Swanigan with a true four-out small ball look.

Isaiah Livers had some terrific moments defensively against Edwards in Ann Arbor, but Duncan Robinson has been playing more minutes than Livers down the stretch. Michigan needs its combination forwards to keep Edwards in check while knocking in multiple 3-pointers themselves. If they can do that, the Wolverines should be in a good position.

Zavier Simpson might not have been named to the Big Ten’s All-Defensive team, but he’s creating his own point guard grave yard in New York City. He’ll wrap up his week in the city while defending arguably the best point guard in the Big Ten, Carsen Edwards.

Edwards is an elite shooter off the dribble. The only Big Ten player with at least 15 attempts who has been more efficient shooting off the bounce this season is Edwards’ teammate Dakota Mathias. Edwards touts a 57 eFG% on off the dribble jumpers and Mathias checks in at 62.7%.

Edwards is 10-of-19 from deep in Big Ten Tournament play and will be the most formidable test of the tournament for Simpson. Jordan Bohannon’s 3-of-14, Glynn Watson Jr.’s 4-of-12 and Cassius Winston’s 3-of-10 shooting lines against Simpson are reason enough to believe that the sophomore point guard can at least make Edwards work for his offense.

This Michigan team has proven more than most would have thought possible in New York City. They have moved all the way up to No. 9 in KenPom, but are still 3 point underdogs against Purdue today. The Wolverines should have a significant crowd presence as they look to make it back-to-back Big Ten Tournament Championships and make their final seeding case before Selection Sunday.