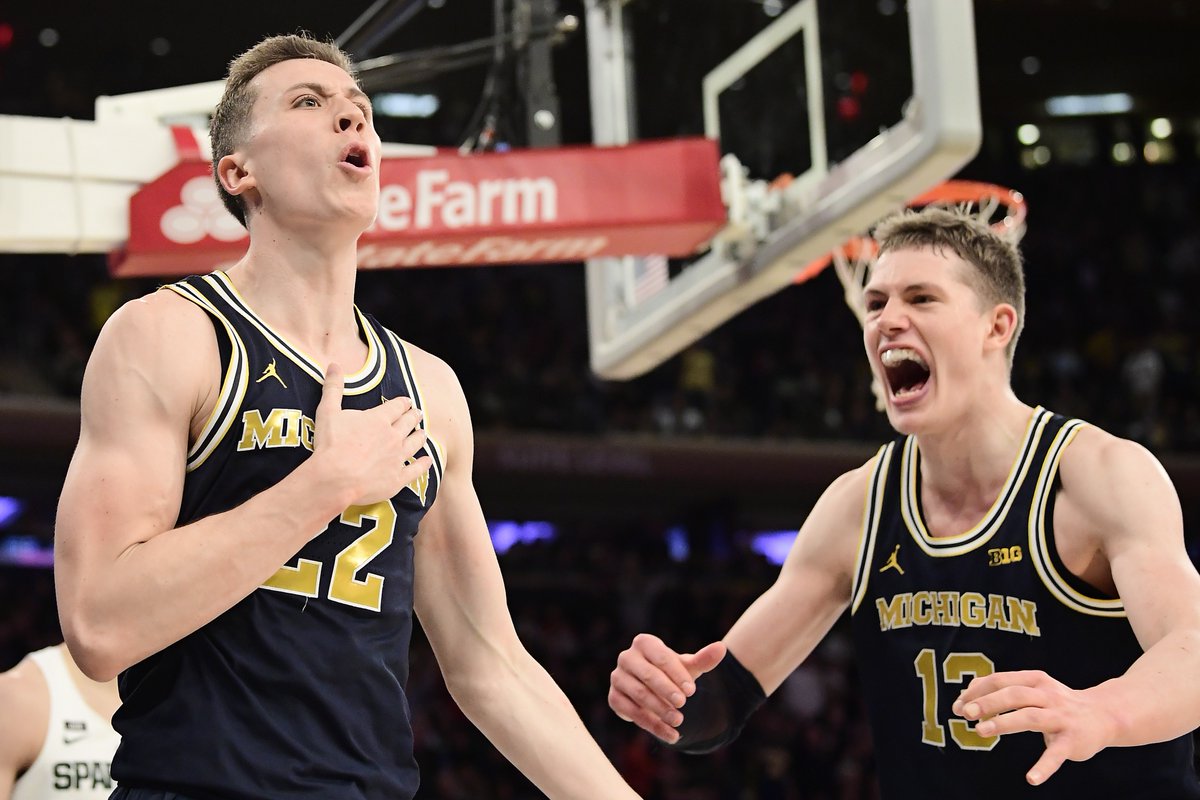 Michigan beat Purdue comfortably to win the 2018 Big Ten Tournament. Here’s how it happened and what to make of this Michigan team that is peaking at the right time.

Two things seemed to come up at every John Beilein press conference back in November and December.

The first was a sense of frustration and confusion as to how his team could be making the sort of miscues that he preaches to avoid. Things that might qualify as simple basketball decision making for Beilein, but advanced calculus to the average college freshman or newcomer.

The second was a unwavering belief that this team would grow into something special. At some moments that belief seemed plausible, but there were plenty of others where it sounded impossible.

A few months later, Beilein looks like an evil genius once again. The difference between Michigan as of March 4th, 2018 and Michigan as of December, 6th, 2017 is almost too great to believe.

The Michigan head coach figured out how to integrate a collection of pieces that might never have stood out on their own into a team that recorded at least one win over every Big Ten team. The type of team that won four games in four days to win the Big Ten Tournament. For the second year in a row.

Just like last year, Michigan’s run through the Big Ten in New York City wasn’t a fluke. It was the story of a team peaking at the right time, playing its best basketball in March and a group that has it figured out.

The Wolverines have been the best team in the country since February 7th. They’ve won 9 games in a row. They won on the road. They beat good teams, they beat average teams and they are still getting better. 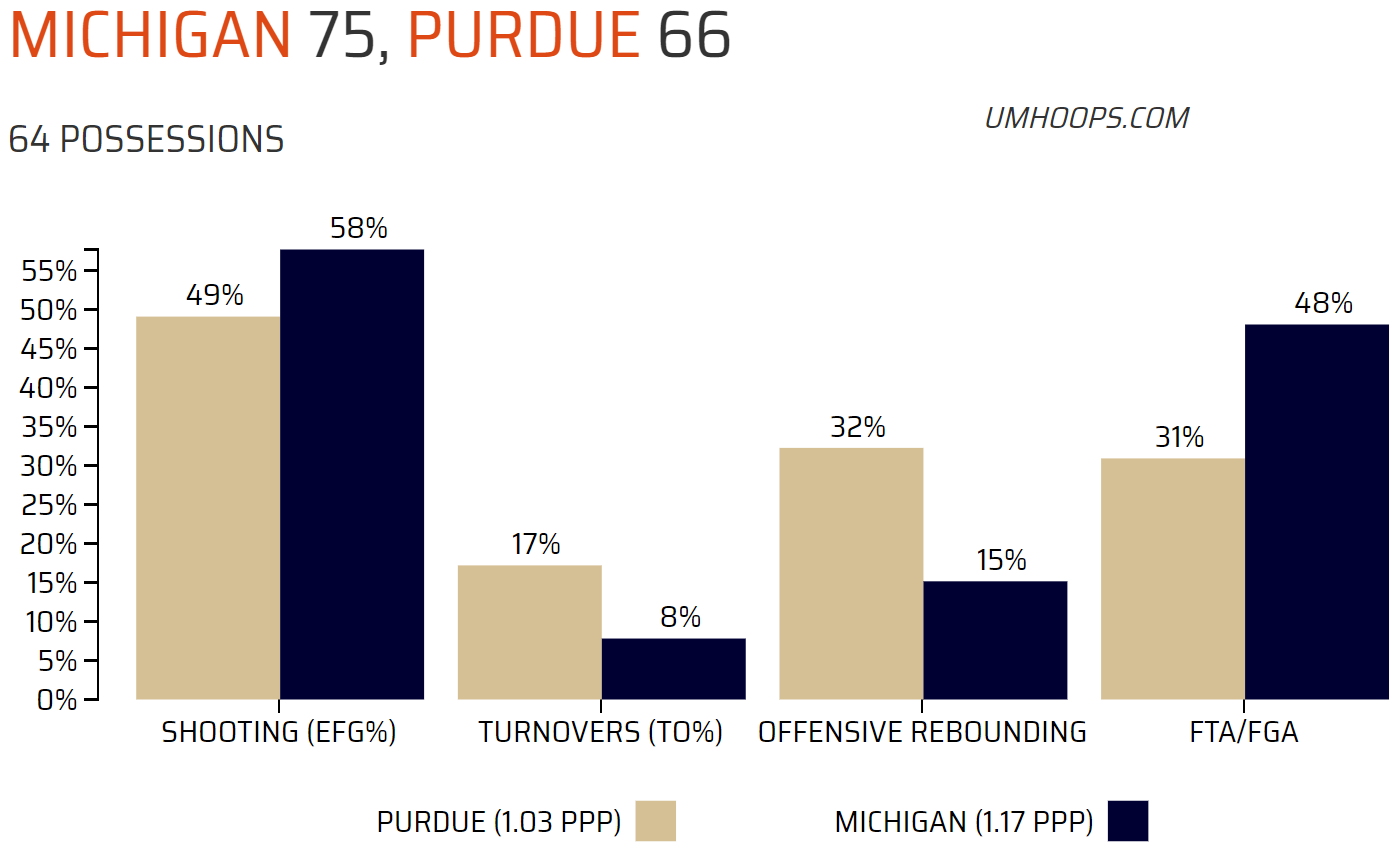 Michigan’s offense had its way with the Purdue defense like a cat with a ball of yarn. Purdue tried to stick with a more traditional ball screen defense in the first half before switching screens in the second. Michigan attacked both looks effectively and the comfort in the ball screen game basically across the board — ball handlers and rollers — has grown exponentially over the last three weeks.

I loved some of the subtle adjustments that Michigan has been making out of ball screens whether its tighter side ball screens and frequent re-screening for ball handlers that struggle to shoot or making a concerted effort for bigs to crash the glass after guards shoot over the switch. Michigan has also figured out some of the proper angles to find those wraparound feeds to the roll man that just weren’t there early in the season.

The Wolverines played almost perfect offense in the first half, but they missed a handful of open threes that prevented a great half from being a dominant half. They made some more difficult threes in the second half and still finished with 1.17 points per possession of offensive output despite dicey free throw shooting down the stretch.

Defensively, Michigan just gets it done. I’m not sure what else you can even say at this point about a Michigan defense that is now in the top ten nationally in adjusted defensive effcieicny. Isaac Haas had some moments and finished with 23 points, but Michigan’s defensive effort against everything else that Purdue does was exceptional. Carsen Edwards was held in check — 4-of-16 shooting — thanks to a tag team effort by Muhammad-Ali Abdur-Rahkman and Zavier Simpson. Vince Edwards had mas many turnovers (2) as made baskets and the Wolverines ran Dakota Mathias off of every dribble handoff and forced him to do anything other than shoot.

It will be a long week until Selection Sunday, but I don’t think the rest will hurt the Wolverines that much. There’s nothing that John Beilein loves more than practice and I suspect he’ll have plenty to focus on during a week of skill development in Ann Arbor. 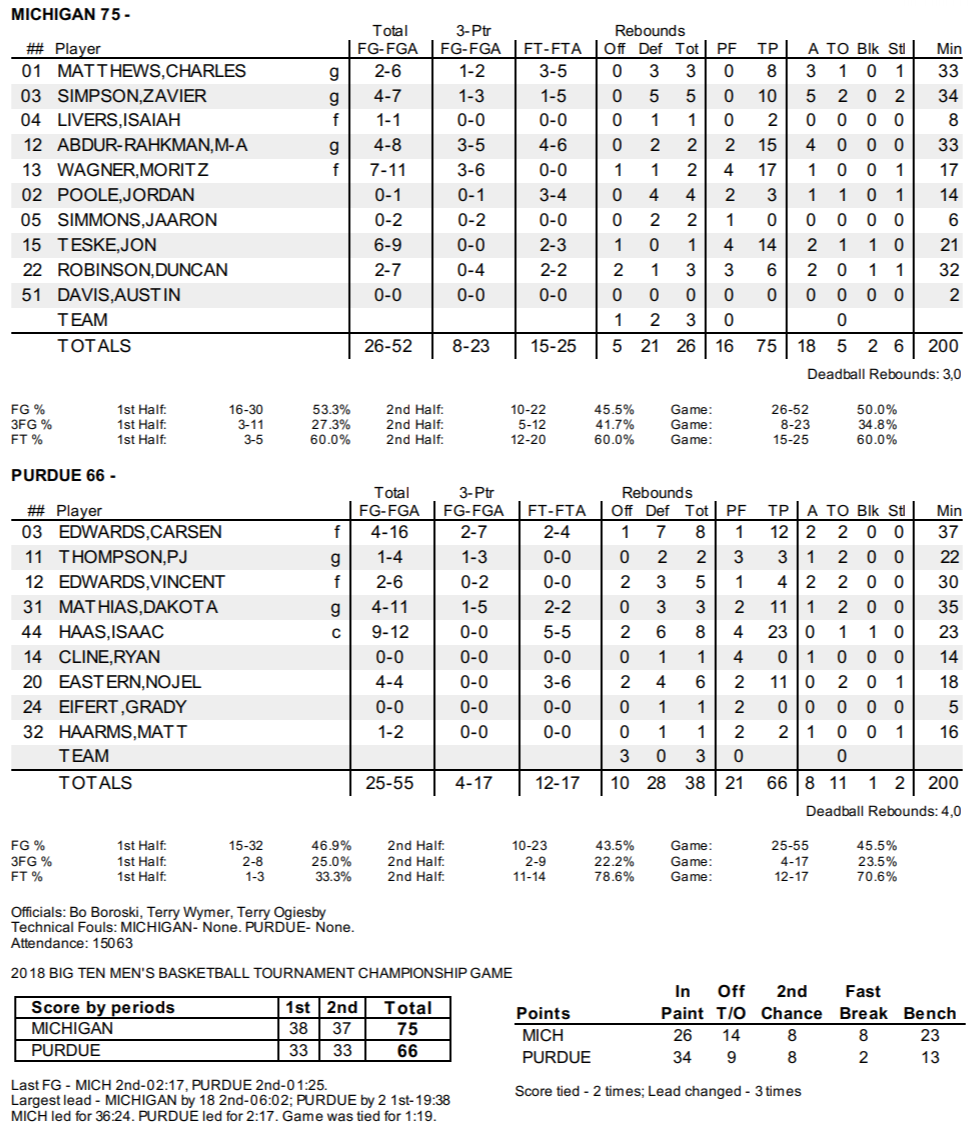