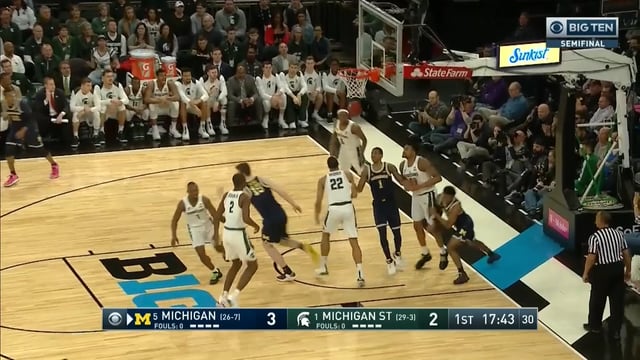 In an often ugly game, it was the Wolverines, backed by their sophomore point guard, who emerged with a 75-64 win for the second double-digit victory over the Spartans this season. After a cold first half, Michigan — led by a trio of 15-point performances from Moritz Wagner, Muhammad-Ali Abdur-Rahkman and Simpson — shot 12-of-18 from the field in the final 20 minutes before icing the game away at the free-throw line. Here are five key plays from the Wolverines’ win over Michigan State:

1. Simpson, Matthews get off to quick start

It didn’t take long for Simpson to make an impact.

Just 19 seconds into the game, he hit a 3 and promptly stared at Michigan State’s bench. Then he had two aggressive takes to the basket, finishing both, that were sandwiched by a pair of 3s from Charles Matthews.

The pair had all 13 of Michigan’s points before the first TV timeout, keying the Wolverines to an 8-0 run and a 13-4 lead over the Spartans.

“I thought we got off to a poor start,” said Tom Izzo after the game. “Give them credit, yet the guy that hits the 3s were not the guys that normally you thought would make 3s. I thought Matthews hits two of them and Simpson hits one, they had nine points.

Perhaps Izzo also didn’t foresee his power forward Nick Ward picking up a technical and getting flustered by Matthews, who may have gotten in the heads of several Spartans at the beginning of the game. Either way, it was clear Michigan wouldn’t back down, and was determined to stand its ground.

2. Wagner starts to heat up

Michigan’s early lead faded away and eventually became a three-point halftime deficit. It probably could’ve been larger, considering the first-half struggles of Wagner. He missed all seven of his shot attempts, on both shots that were both wide open and contested. He missed his first shot coming out of the half, too, on an open 3 that John Beilein dialed up for his star junior.

It was a far cry from Wagner’s first game against Michigan State, when he scored a career-high 27 points. Yet Wagner would turn things around, setting the tone for his team’s much-improved second-half performance.

After Abdur-Rahkman hit a 3, Wagner scored his first basket on an impressive wrap-around pass from Simpson to regain the lead. Then Wagner scored his second basket in a row, going straight at Gavin Schilling, before euro-stepping his way to a layup in transition. He had six points in Michigan’s quick 9-0 spurt to start the half, giving them a lead they would not relinquish.

“To be honest with you, I didn’t really care, you just keep playing,” Wagner said when asked about his turnaround. “When you’re confident as a team, you just let the game come to you and that’s just how it goes.”

Added John Beilein: “… Tough to score on Michigan State. And they did a really good job. All of a sudden a few went in for us and Moe got going a little bit.

“I told him, this is my great motivation at halftime, ‘Hey, Moe, are you going to make a shot? Because right now you’re stinking the place up. Just make one shot.’ We played with each other like that. He just smiled: ‘Yes, Coach, I can do that.’ ”

It was only a matter of time before Miles Bridges left his mark on the game, after a first half that saw him take numerous long jumpers to little effect. Around the midway point of the second half, Michigan State’s star forward ripped off seven points with an array of moves. He was his team’s only consistent source of offense.

But each time Bridges scored, Michigan had a response. Wagner hit a baseline 3 off a feed from Matthews. Then Matthews went right at Bridges and earned a trip to the line, hitting both. Abdur-Rahkman backed down Matt McQuaid and hit a righty hook, before Simpson blew past Tum Tum Nairn to finish at the rim.

Michigan’s team effort on offense was important in countering Bridges, keeping the Spartans at bay.

It appeared the Spartans had a window to climb back into the game after McQuaid drained a 3 with 3:23 left, cutting Michigan’s lead to just five.

On the following possession, the Wolverines couldn’t get anything going on offense either. The ball fell into Abdur-Rahkman’s hands late in the shot clock. He made his way toward the top of the key before letting go of a prayer — a prayer that landed on the back of the rim with a thud, before rolling in.

“I think the play broke down a little bit and I was dribbling at the top of the key and saw the shot clock was running down,” Abdur-Rahkman said. “And I knew I had to take a shot. It felt good. I felt like it should have swished, but hit the back of the rim and it went in. So I’m glad.”

Perhaps it was a lucky shot. Either way, it stretched Michigan’s lead back to three possessions and was a crucial bucket. Then, on the other end, Abdur-Rahkman cancelled out Michigan State’s possession by drawing an offensive foul on a visibly frustrated Bridges.

5. Robinson with the dagger

Izzo and the Spartans wouldn’t go down quietly. Much like in the first matchup, Michigan State began fouling relatively early, this time around the two-minute mark. Michigan made enough free throws to hold the Spartans off, but the game wasn’t over until Duncan Robinson had his say.

With just over a minute left, Robinson headed toward the basket. Michigan State tried to foul, and did — but Robinson finished through the contact anyway. The crowd roared. The end appeared to be in sight.

And it would be, 43 seconds later, when Robinson stole a handoff from Cassius Winston and ended the game. Michigan State wouldn’t try to foul again after that.

“So much respect for Michigan State,” Beilein said. “We beat a really, really good basketball team, a team that deserves where they are, top 1 to 10 ranking. They can win the national championship. Everybody needs breaks to do that. But they’re a fantastic team and we’re very appreciative that we were able to get a win today.”