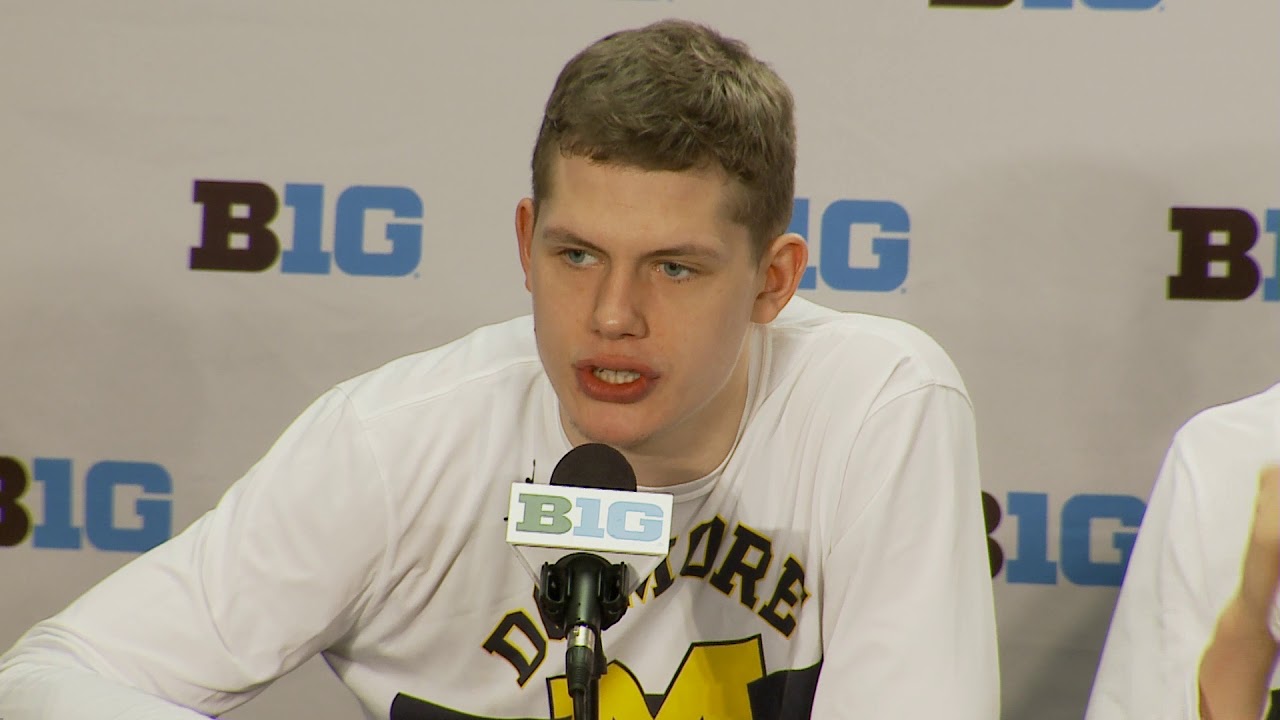 Here’s what John Beilein and his team had to say on the podium after Saturday’s win over Michigan State.

COACH BEILEIN: Great game, incredible atmosphere here at Madison Square Garden that — played in the Big East championship game before. It has every element that you could ever want and even more because the Michigan-Michigan State being here. But basically many of our teams would have commanded that same audience.

So great idea. I don’t think anybody liked the timing being a little bit earlier, but I think in the long run anybody who attended that game today knew it was well worth it for us to make this trip.

So much respect for Michigan State. We beat a really, really good basketball team, a team that deserves where they are, top 1 to 10 ranking. They can win the national championship. Everybody needs breaks to do that. But they’re a fantastic team and we’re very appreciative that we were able to get a win today.

THE MODERATOR: Questions for the student-athletes.

Q. Moe, after a slow start, how did you approach your game on the offensive end in the second half?
MORITZ WAGNER: I think my teammates and our coaching staff — to be honest with you, I didn’t really care, you just keep playing. When you’re confident as a team you just let the game come to you and that’s just how it goes.

Q. How tough was it winning three games in less than 48 hours here?
MUHAMMAD-ALI ABDUR-RAHKMAN: When you’re playing against good teams it’s always going to be tough. But everybody has the same fatigue level at this point. And it’s not really a factor. We just keep playing.

DUNCAN ROBINSON: Yeah, obviously a challenge. Everybody is going through it, though. And you’re playing in front of a crowd like that, you don’t even feel fatigue. It’s just instinct to, it’s easy to get up for.

MORITZ WAGNER: Yeah, obviously three games in — four games in four days is a challenge. But fatigue shouldn’t be an excuse or a reason for anything.

Q. I think there were more Michigan fans here at the Garden than Spartan fans. Do you think that the crowd — were you able to feed off the energy of the crowd, which probably was a motivating factor in winning the game today?
DUNCAN ROBINSON: Yeah, the crowd was huge. We know there’s a really good contingency of Michigan fans here in New York. So that’s one of the reasons why we were so excited to come play here. That was a huge difference in the play. We really felt their support. And it was a difference maker.

MORITZ WAGNER: Obviously it’s a lot fun to celebrate a win like that with the fans and makes it all worth it.

MUHAMMAD-ALI ABDUR-RAHKMAN: I agree with both of them, a lot of energy in the building. Felt like a home game and we definitely fed off the energy.

Q. Muhammad, you had one of the game’s biggest shots, a shot clock-beating 3 with 2:50 to go to by up eight. Can you take us through what happened on that play?
MUHAMMAD-ALI ABDUR-RAHKMAN: I think the play broke down a little bit and I was dribbling at the top of the key and saw the shot clock was running down. And I knew I had to take a shot.

It felt good. I felt like it should have switched, but hit the back of the rim and it went in. So I’m glad.

THE MODERATOR: Thank you. Questions for Coach.

Q. Would you say overall with having to go through the condensed schedule this year that it was worth it to have this experience playing in New York City?
COACH BEILEIN: Absolutely. I just think if you’re in, anybody that was here today said, you know, that was well worth it. And I know that the University of Michigan, when we heard about it, because of our tremendous alums in this area, the support and people, I think, in this area have a great appreciation even if they didn’t go to Michigan for what an incredible university we have and basketball program we have.

For us it was like a no-brainer, even though we knew that it was going to be a bit more difficult schedule. We’ve got one more game to play and we’ve got a little time to rest before whatever is next.

Q. You guys have struggled from the line a little bit this season.
COACH BEILEIN: More than a little.

Q. More than a little. But how does your success at the line yesterday and your success today show how your team’s developed over the course of the season?
COACH BEILEIN: It’s a lot of hard work. As you know — especially Zavier and Charles, how hard they work on their own and after practice, to be in that, so they’re in that situation. And I think there were 6-for-8 and 4-for-6. They’re not perfect yet. But they really work at it.

But there’s nothing — it was a sweet sight to see Zavier’s shots just go right through the middle. Of his foul shots the last couple of days, maybe 8-for-10 or 10-for-12, shooting it right down the middle.

And that’s what it is sometimes. Just the ball’s going to bounce your way or not because both teams played really good defense. Tough to score on Michigan State. And they did a really good job. All of a sudden a few went in for us and Moe got going a little bit.

I told him, this is my great motivation at halftime, hey, Moe, are you going to make a shot? Because right now you’re stinking the place up. Just make one shot. We played with each other like that. He just smiled: Yes, Coach, I can do that.