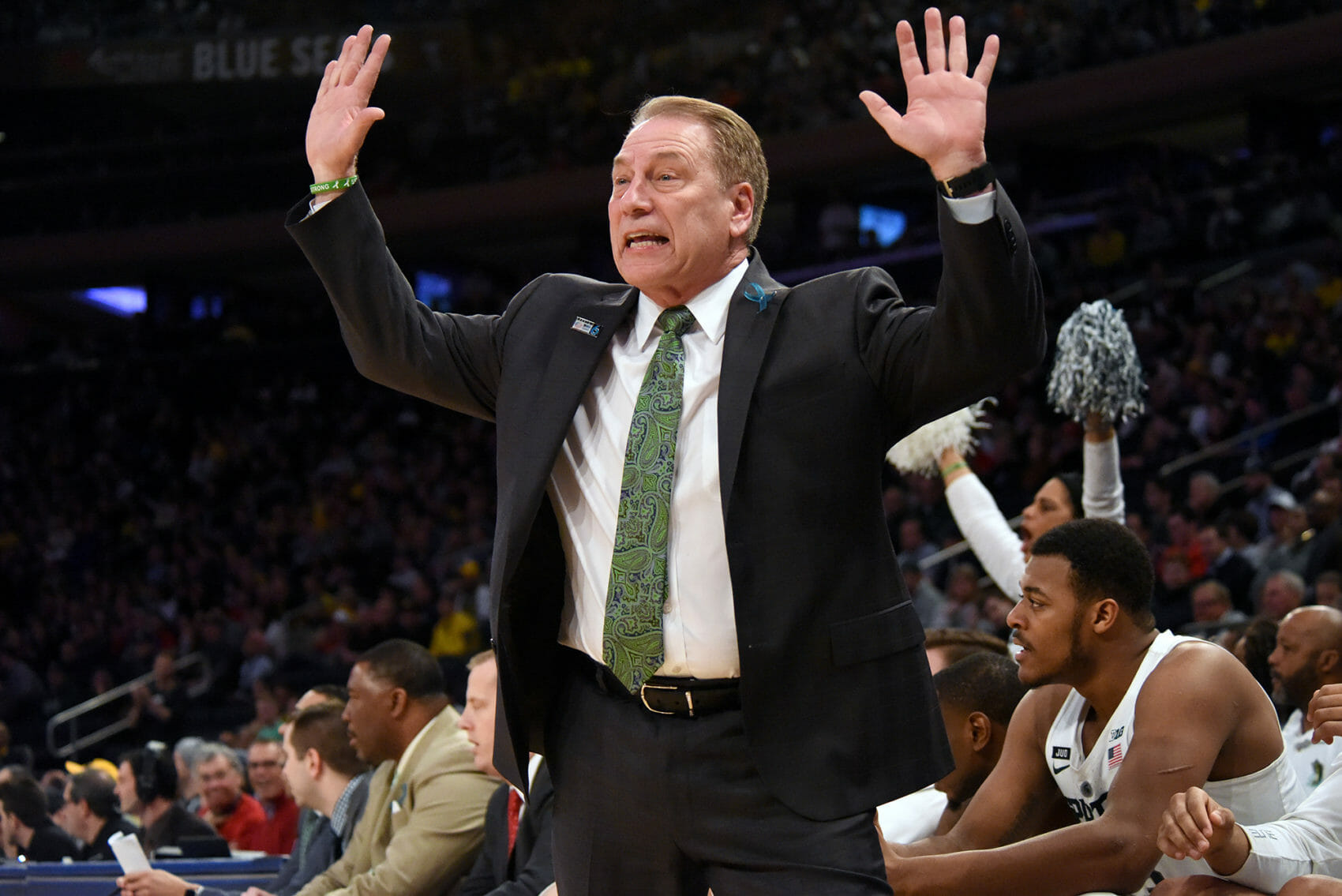 COACH IZZO: Well, I thought we got off to a poor start, and give them credit. Yet, the guys that hits the 3s were not the guys that normally you thought would make 3s.

I thought Matthews hit two of them and Simpson hits one, they had nine points. And, you know, not the players’ fault as much as it is what we were going to do in the scouting report.

So they did the job; we just didn’t do a good enough job on the scouting report. And then we bounced back and actually played pretty good the rest of the half. The second half we couldn’t make any shots, and I think it affected our defense. We missed a lot of good shots. And we had it down, I think it was four or five, and Rahkman crotched in that 35-footer. That was tough. And then I think we had it to five or six and Nick missed that layup.

Not enough things were going our way. And give them credit. They played well. They didn’t shoot it much better than us the first half. They shoot 66 percent in the second half. And they only shoot 44 for the game.

You know, we weren’t great, but we weren’t bad defensively. Our number one concern was the turnovers. And we had 13 of 5 on second chance points and 7 to 4 on points off turnovers. The first game it was 26-7.

So we did some of the things we needed to do. We just did not do a good enough job making shots and they won fair and square and deserved to win.

Q. Obviously disappointing to lose, but this isn’t defining your season. The next tournament is. So how do you take this and just get ready and move on quickly to the tournament-type mindset?
MILES BRIDGES: We’re just going to try to move on, get back in practice and continue to get better.

CASSIUS WINSTON: Yeah, you know, it was a big game. But it’s not the end of our season. There’s still another big goal that we’re very capable of achieving. So we just gotta use this to fuel our fire. I think everybody didn’t play their best game today. And we just gotta get back (indiscernible) to the shop and become that team we can become.

Q. When you guys played Ohio State earlier in the year and had that loss, it kind of dinged your confidence for a while. How different are you guys now and confident that losing to these guys a second time won’t mess with you going forward? And how different are you as a team mentally?
CASSIUS WINSTON: We won, I don’t know, 13, 12, 13 straight. So we got that ability as a team to make runs and put wins together. So this was — like I said, it was a big game for us but they came out on top with the victory. But that’s not going to alter our end goal and what we think we’re capable of as a team.

MILES BRIDGES: We know what we’re capable of. We’re not going to let one loss determine how we play for the rest of the season, because we know we have bigger goals ahead.

Q. Miles, what turned the game around early in the second half? You did have a halftime lead.
MILES BRIDGES: For the bad or for the good? We just came out really stagnant, let them get going at the 3-point line, you know, they like to hit three pointers, and we allowed penetration.

Q. It’s every basketball player’s dream to play at the Garden. LeBron calls its his playground and Kevin Durant says the energy of the fans just playing at the Garden is second to none. What are your thoughts and what did you love about playing here at the Garden?
CASSIUS WINSTON: It was an amazing experience, just being in such a legendary place and playing in front of all those fans, a lot of Spartan Nation out there that came and supported us. It was great playing out there.

Q. What’s the mood in the locker room after going 0-for-2 against the arch rivals from down the road?
MILES BRIDGES: Our mood is we’re really mad. But like I said, we’re not going to let this affect us in the future.

Q. You’ve had a lot of teams that didn’t win the Big Ten Tournament and went on and had great success in the NCAA. How different is it with this group of guys that listen to you so intently getting them to flip the switch for that next tournament?
COACH IZZO: I’ll be honest, I was really disappointed in how we started out and kind of like my old buddy Brian Gregory says, what starts bad sometimes ends bad. And it wasn’t the start that — Matthews hits two 3s and Simpson hits a 3. That’s nine points that they normally don’t get.

But it was the things that we had in the scouting report on how they drove us, which way they drove us, that we didn’t seem to pick up as well as I thought we would.

And because of that — and still it was a game and us not playing our best. I don’t know what John felt about his team playing their best, but both of us didn’t play real well the first half. They just had a better start. We had a better finish.

In the second half, I thought it changed when Wagner hit that 3 in the corner. We acted surprise that he was going to shoot it. I think it put them up two or three. And then something else happened and then, of course, the missed layup and I guess the good shot from long range. And then we were playing catch-up.

Q. Michigan this season is rating higher defensively than it ever has under Beilein. And from your perspective, from the eyes of a coach, in both scouting and execution, can you speak to what you see as true differences with this team this season versus all the other years you’ve prepped to play Beilein’s teams?
COACH IZZO: I think they’re a little tougher, personally. I think Matthews is a great athlete that prides himself on guarding. And Simpson 100 percent prides himself on his defense. So you’ve got two pretty good defenders in places where — that I think is important.

I think the young freshman, Livers, I thought does a pretty good job defending. I think they’ve got a couple of players that are better defensive players. And maybe, I don’t know, him, their staff still figured out at the end of the day you do gotta check people well to win.

And as evident by our second half. I mean, they shoot 66 percent. I thought we did. I bet you the last 16 minutes of the first half we probably held them in the 20s. And we kind of disappeared from that in the second half.

Q. You got an 11- or 12-day layoff coming up. Have you ever been through something like that before as a coach? And any ideas on how to keep your guys sharp?
COACH IZZO: No, I haven’t ever been through that. I think it’s 11 or 12 days either way, I guess, or maybe more. What is it, Saturday? We played on Friday. That could be 13 days, huh?

I don’t know what I’m going to do. And the best part is we’re on spring break next week. So we might just go to the beach, East Lansing, and see if we can play a little beach basketball and — we’re going to do something. We talked about doing something in Chicago and going over and seeing Zel play. We might go down and see the Pistons or do something as a team.

The one thing that I would remind everybody, this team has won 12 games in a row and won 29 games this season. And through some trying times, and I think that I’m going to appreciate a lot. Now, do we have to get it back on track? Yeah, we do. Cash struggled out here. He’s been playing so good but he struggled out here.

And we just had some guys that didn’t do the things they needed to do. But they’ve done the things they’ve needed to do over a long period of time. And I’m going to keep that in mind, not panic over a loss when it’s your rival. It’s always a bigger win when it’s playing for a chance to play in the championship game. Of course it’s a bigger one.

But I’ve got a lot of pride in these guys and what they’ve done and how they’ve worked through some circumstances that had nothing to do with them. And I’m really pleased with that and proud of them, to be honest with you. So we’ll get better. We’ll probably practice a lot during that time.

I mean, it will be one time in my life the NCAA has no rules on us. It’s — we’re on break and we don’t have any games. That doesn’t happen very often. In fact, it’s never happened to me. So knowing me, I’m going to take advantage of that.

Q. Michigan State-Michigan is one of the great in-state rivalries in college basketball. What do you love about the rivalry and how that we were able to see that rivalry in the biggest stage of sports?
COACH IZZO: Well, you asked the question to our players about Madison Square Garden and I think everybody knows from a coaching standpoint this was a tough year the way everything was condensed.

But as I said, once you got to Madison Square Garden, the thrill of playing in an arena like this was special. And in all honesty the way that place was alive I thought both teams brought tremendous crowds here, a lot of alums. And I didn’t think they got a great game, but they got a pretty good game that was played hard and competitive.

So I guess for me I appreciate being in Madison Square Garden and for only the second time in this rivalry did we get to play each other in the Big Ten Tournament. We did not play good enough to win; they did. Credit goes to them.

But the memory and the — of playing here I think will be important to our guys as they go through life.