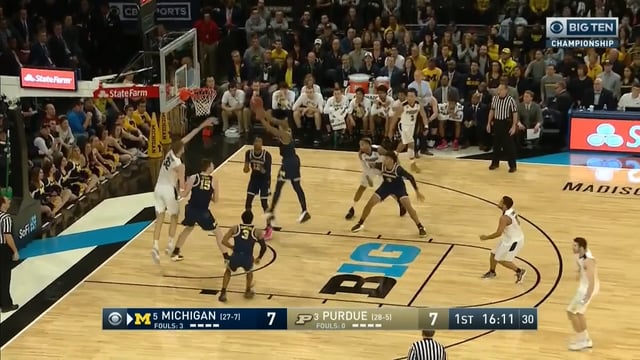 Well, that was something.

For the second consecutive year, the Michigan basketball team won four games in as many days to take the Big Ten Tournament Championship. With a well-rounded performance, the Wolverines earned their first victory of the season against an elite Purdue team, emerging with a 75-66 victory that was somehow even more lopsided than the score might indicate.

“It feels great just being able to do it with my teammates,” said Zavier Simpson. “We worked hard for this. It’s something we’ve been plotting on for a while since July.”

Like against Michigan State, the Wolverines wasted no time in jumping out to an early lead before the first TV timeout. The Wolverines scored on seven of eight possessions, with three buckets coming from an unlikely source — sophomore center Jon Teske.

After Moritz Wagner set the tone with an early 3, it was Teske who picked up the slack once Wagner exited the game with early foul trouble.

He immediately grabbed an offensive rebound and scored on a putback. Then he rolled to the rim and dunked off a feed from Muhammad-Ali Abdur-Rahkman. Teske even drained a pair of free throws.

His teammates would follow suit. Zavier Simpson found Isaiah Livers for a transition layup, Abdur-Rahkman hit a 3 off a dribble handoff and Simpson kissed one off the backboard after splitting a pair of defenders.

Lo and behold, Teske’s early offense was not a mirage. The 7-foot center continued to use his size to his advantage against Purdue’s equally large frontcourt. On one play, Simpson drew attention with dribble penetration, then simply lofted one up to Teske to finish in mid-air.

Charles Matthews would follow suit with a mid-range jumper, before Simpson went right past Vincent Edwards to score.

Teske would cap off the late first-half run by displaying his shot, hitting a short jumper off a pass from Duncan Robinson before draining a 15-footer.

Teske would finish with 12 points in the first half alone. That made all the difference as Wagner was saddled with his early foul, as Michigan entered the locker room with a five-point advantage.

“He’s a no-nonsense kid,” Beilein said. “As we continue to improve his skill set and his body, he’s got a great future.”

There was a good possibility Purdue would make a run and erase Michigan’s lead. After all, that’s just what good teams do, and the Boilermakers are that quality of team.

So when Isaac Haas scored down low for what seemed like the millionth time to cut the Wolverines’ lead to just three, Purdue seemed poised to make its run.

Yet Michigan would punch right back.

Simpson found Wagner on a wraparound pass — a pass that Michigan has had so much recent success with — before Abdur-Rahkman drained a transition 3. After Carsen Edwards threw the ball away, Abdur-Rahkman found Simpson trailing on the break. The sophomore stepped confidently into his shot and sank it, extending Michigan’s lead to 11, the largest it had been all game, and forcing Matt Painter to call timeout.

The Big Ten Tournament’s Most Outstanding Player could only play 17 minutes in the championship game. But he made sure those 17 minutes were as impactful as possible.

Wagner scored 17 points on 7-of-11 shooting from the field, including 3-of-6 from deep.

With his mom, having travelled from Germany for the tournament, watching, Wagner hit two incredibly important shots in the second half.

The first 3 came the possession after Dakota Mathias hit one on the other end.

The second came late in the shot clock. Robinson passed the ball to Wagner in the left corner. Wagner promptly spun around, lifted and sank a shot over his defender. It was a circus shot, one for the highlight reels, and it spurred Michigan as the Wolverines continued to build their lead.

“To be honest with you I didn’t know how much time was on the clock,” Wagner said. “I just saw Duncan running for the hand-off. It must have been a little time on the clock so I took my shot it and it went in. And obviously it’s a good feeling when the ball goes in and the Garden cheers for you.”

You’ve all seen the play by now. Yes, that one — Jon Teske putting Isaac Haas on a poster.

It was a remarkable play. Haas, nearly 300 pounds of beefcake who had given Michigan trouble all night, looking up at Teske, the unassuming sophomore from Medina.

But that was simply the type of night that Teske, and the Wolverines, had. He finished with a career-high 14 points on 6-of-9 shooting, combining with Wagner to outscore Purdue’s frontcourt. Haas got his, of course. But so did Teske and Wagner.

And though there would be six more minutes to be played after Teske’s thunderous dunk, one got the sense that that was the play that spelled Purdue’s end, and the beginning of Michigan’s celebration.

“I really have no words to explain,” Teske said when asked about the dunk. “The play just happened in that instance and it was a great pass and (I) just finished it. But then in the first half we were in foul trouble a little bit and I was able to knock down a couple shots and just try to help my team win.”

Added Wagner: “I was so happy when he popped off after that dunk. I got so excited. He got emotional. Yeah, I know how good he is. I play against him every day. That was long overdue.”