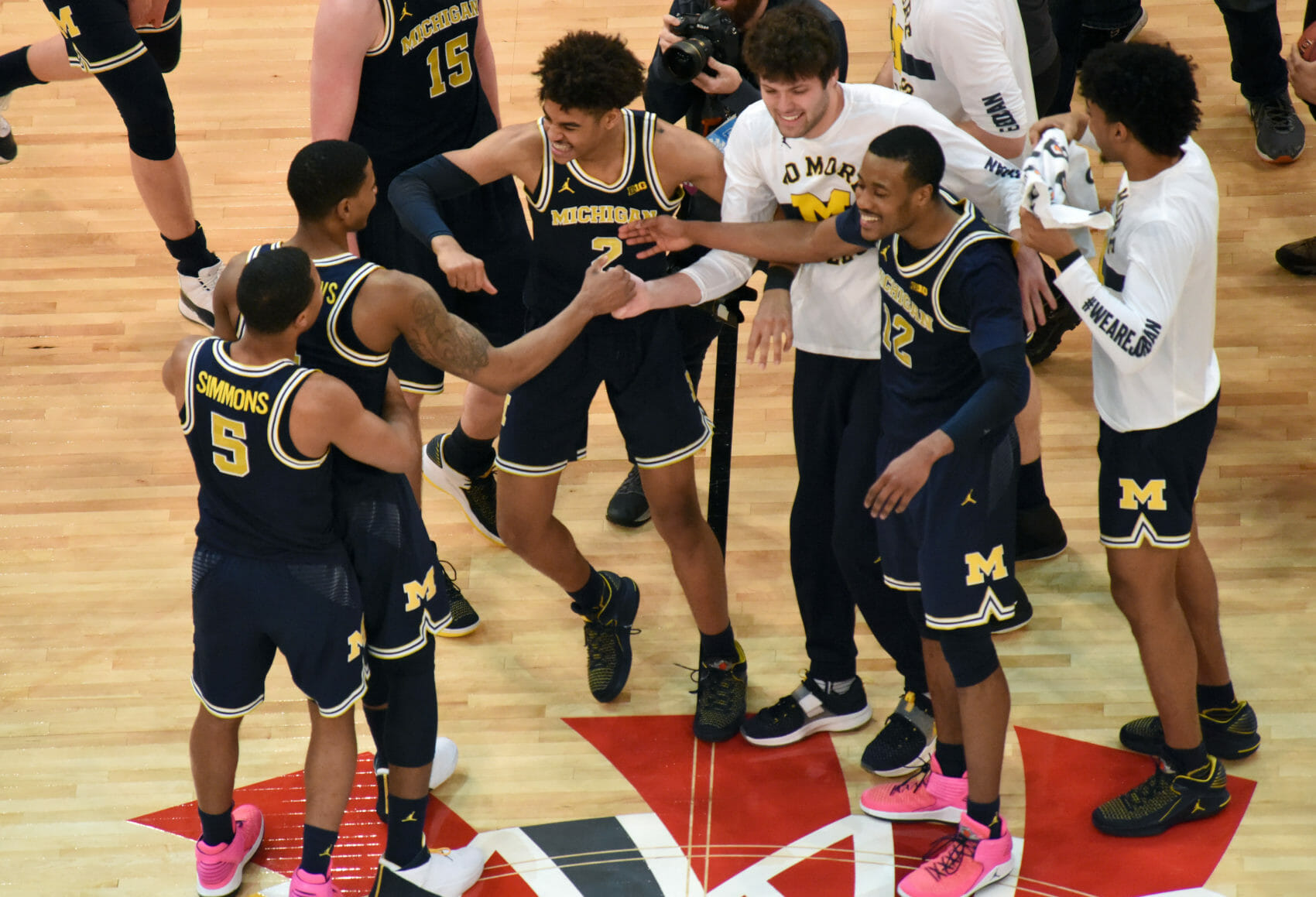 Michigan won the title it earned

Duncan Robinson was standing at the free throw line when confetti started to come down.

It was only a handful of flakes — presumably released by someone who pressed the wrong button with seven minutes still left in the game — but they were maize. Robinson tried to contain a confused smile, then made both free throws to extend Michigan’s lead to 17.

When the real thing happened and the Wolverines sealed a Big Ten Tournament championship with a 75-66 win over Purdue — seven minutes of basketball and what seemed like 45 minutes of real time later — Robinson joined his teammates in celebration, jumping up and down as the bench became a tornado, sweeping into the pile as a mountain of confetti came down, this time, with purpose.

“First I thought like, ‘Dang,’ ” said Isaiah Livers. “Last year, I was in the same — sitting down on my couch, cheering and cheering right in front of the TV. It was like, ‘I want to get there next year. I want to do the same thing.’ I was so proud of those guys. From then on, like the next day, I was thinking, ‘Maybe that could be me.’ ”

Last year, though, Michigan’s run was an improbability, starting with a plane crash and ending with a trophy. This year, the Wolverines were the best team, plain and simple.

Not at the beginning of the year— when Central Michigan nearly came into Crisler Center and pulled off an upset, when Tremont Waters singlehandedly ended Michigan’s Maui Invitational run before it started, when a 20-point lead became a nine-point loss at Ohio State. But somewhere along the line, the Wolverines found a defensive ethos and ran with it. They hummed through the first month of conference play, winning most of the games they were supposed to win and losing most of the games they were supposed to lose, but the turning point didn’t come until a February loss at Northwestern. Michigan scored just 52 points in that game, befuddled by the Wildcats’ extended 2-3 zone mere weeks after Nebraska held them to the same number by switching ball screens.

“Offensively, it was just not beautiful,” said Moritz Wagner. “Not good looking, you know.

John Beilein is known for getting his teams to improve as the season goes. This year, he took a team with more defensive talent than offensive and got it to turn the corner just in time for March.

Zavier Simpson was an offensive nothing in November. He couldn’t finish over anybody larger than six feet and drove without purpose, losing the starting job to Eli Brooks in an overnight decision in Maui. This weekend, he attacked the rim with a veracity that’s become commonplace and shut down every point guard that suited up across from him. Once a player who couldn’t put up a shot at the rim without it finding the hand of an opposing center, Simpson is now a borderline elite finisher, turning the corner around switches and tossing up layups at unblockable angles.

“If I see a big man in front of me … I feel like he’s not capable of guarding me,” Simpson said Sunday after spending the second half toasting Isaac Haas, Vincent Edwards and Matt Haarms off switches.

Yeah, something shifted along the way — and Simpson isn’t the only player to have undergone such a change.

Duncan Robinson struggled through the season’s early goings and into conference play. In his last nine games, he’s shot 48.9 percent from 3 and played good defense to boot.

“I think we have, just the right people — Duncan Robinson, for example, all the sudden he’s pretty comfortable in the sixth-man role,” Beilein said.“D.J. Wilson goes pro, right now, he’s gonna need to play back at the ‘4’ position. And all of the sudden it’s not working well. He’s gotta sit down — he played like 10 minutes I think against (Purdue) both times we played them (in the regular season). And you gotta sit back and say, ‘Duncan, we’re gonna play you, you gotta start making shots. Right? You’re shooting 25 percent or something.’ He just like, didn’t like it for a few days and then came back, started making shots.”

Jordan Poole had been on the court for four minutes all year until Michigan played Division II Chaminade in what amounted to an exhibition game. But once he got his chance, Poole ran with it, becoming an offensive sparkplug off the bench. Even after struggling through the Big Ten Tournament, Poole danced freestyle as Beilein matched his every move in the locker room after Sunday’s win.

“Those two have the weirdest relationship I’ve ever seen,” Livers said. “They get into each other, but it’s all love at the end of the day. I respect a coach like that to actually communicate, you know some coaches try to belittle you, he doesn’t. He’s on the same level. He lets us know that we’re all on the same level and that we can all talk to each other.” 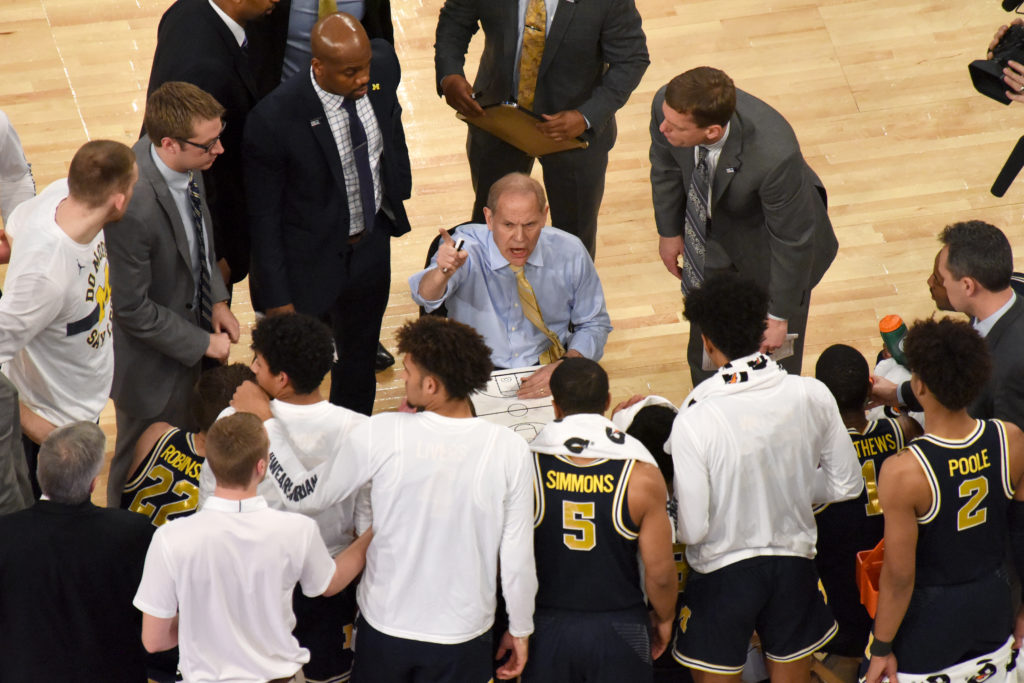 Maybe that’s all it is. Beilein is an offensive genius who figured out that 3-pointers were good 10 years (and counting) before the rest of college basketball. In the last two years, he’s brought in two defensive assistants — Billy Donlon, then Luke Yaklich — who, along with Simpson, transformed Michigan into a team that now ranks sixth in adjusted defensive efficiency.

But Beilein also gives a damn about his players, truly.

He told reporters on Saturday that Simpson will be a great coach one day, then went out of his way to do the same thing on Sunday. He talks lovingly about Moritz Wagner’s mom, whose embrace the junior jumped into during the chaos of the celebration, who held her face in her hands, seemingly choking back tears as Wagner was interviewed by Jim Nantz. He talks to Poole on his level, dancing along as the rest of the team laughs and whoops at the absurdity of it all.

Beilein rolls with the punches and the results speak for themselves. When Moritz Wagner hit a turnaround 3-point circus shot off an inbounds pass to extend Michigan’s lead to 14, it didn’t come from the playbook.

The playcall, according to Livers, was ‘Hawaii’ — which, presumably, doesn’t call for Wagner to become the 6-foot-11 version of Steph Curry. Between Beilein’s laryngitis and the raucous crowd, the Wolverines couldn’t hear it, so they improvised.

Michigan pulled off two straight upsets because Beilein adjusted and opposing coaches didn’t. Tom Izzo barely played Jaren Jackson Jr. at the ‘5’, instead going with traditional bigs who had no chance defending Wagner on pick-and-pops. Matt Painter played Isaac Haas for just 23 minutes despite the Alabamian wiping the floor with Michigan in both prior matchups (and, for that matter, going 9-of-12 from the field on Sunday).

Beilein adjusts his coaching style to his players and his gameplans to opponents. Back in West Lafayette, he wanted to stop Purdue from shooting triples at the expense of letting Haas play 1-on-1. The Boilermakers shot 55 percent from 3 and Haas still scored 24 points in 20 minutes.

On Sunday, Haas got his again. The difference: Purdue made just four three-pointers, tied for their lowest mark all season.

“Our word today was relentless,” said Muhammad-Ali Abdur-Rahkman. “Haas is gonna get points in the middle and things like that are gonna happen. But, we just wanted to limit all the easy shots, mental breakdowns that we had in the first two games.”

Abdur-Rahkman, another player whose game has taken a leap in the past month, did just that. He teamed up with Simpson to hold Carsen Edwards and PJ Thompson to 5-of-20 shooting for the night. For good measure, Abdur-Rahkman tossed in 15 points on 4-of-8 shooting along with four assists and was named to the All-Tournament team.

After the second Purdue loss, Beilein compared Abdur-Rahkman— who had just torched the Boilermakers in a breakout performance — to Derrick Walton. The comparison stuck, as Beilein tossed it out again after Abdur-Rahkman scored 28 at Maryland last Saturday, and nobody can question its validity.

“I finally figured out, I don’t need to talk with Muhammad,” Beilein said.“Muhammad’s got it. But I was like, ‘Come on Muhammad, you gotta give us more.’ As far as energy, visible energy, he was giving us every bit of energy once we got on that court. But I just let him be silent. Last two days, we were in that locker room, he didn’t say a word. He was preparing and then he lets his game speak for itself.”

On Sunday, Abdur-Rahkman wasn’t the only one doing that.

He was joined by Jon Teske — who played 21 minutes as a defensive anchor, scored 14 points on 6-of-9 shooting, then sealed the game with a two-handed dunk that doubled as a finishing move on Haas as chants of his name rang down from the same rafters that house Willis Reed and Patrick Ewing’s numbers.

He was joined by Charles Matthews — who quietly put up eight points, three rebounds and three assists while acting as a defensive stalwart for the fourth day in a row. He was joined by the rest of the team — which was in a celebratory mood, yes, but one of a team that set a tough goal and accomplished it, not one that suddenly found itself in the midst of a trophy presentation after a whirlwind week that started with a plane crash and practice jerseys. 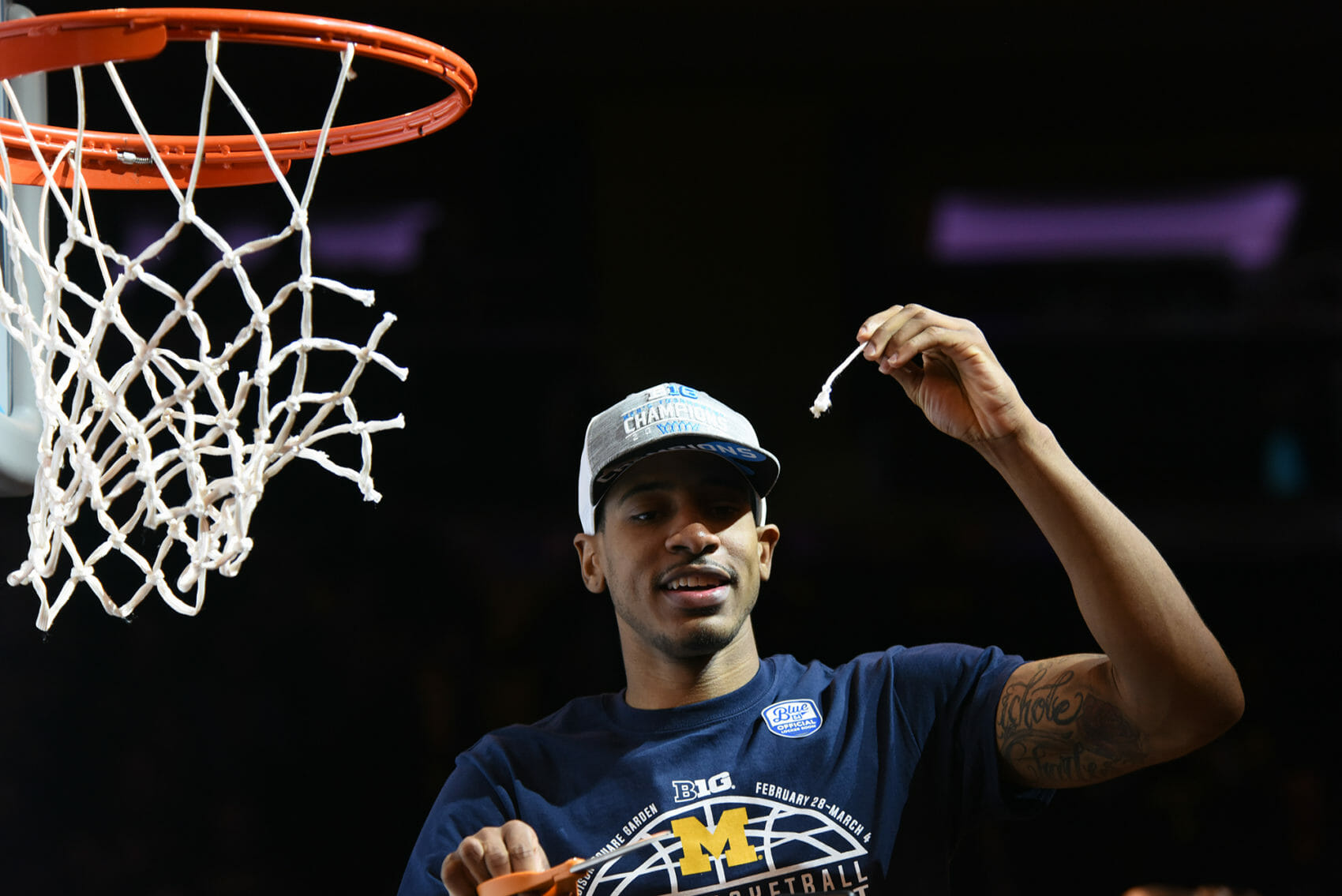 Michigan won the title it earned