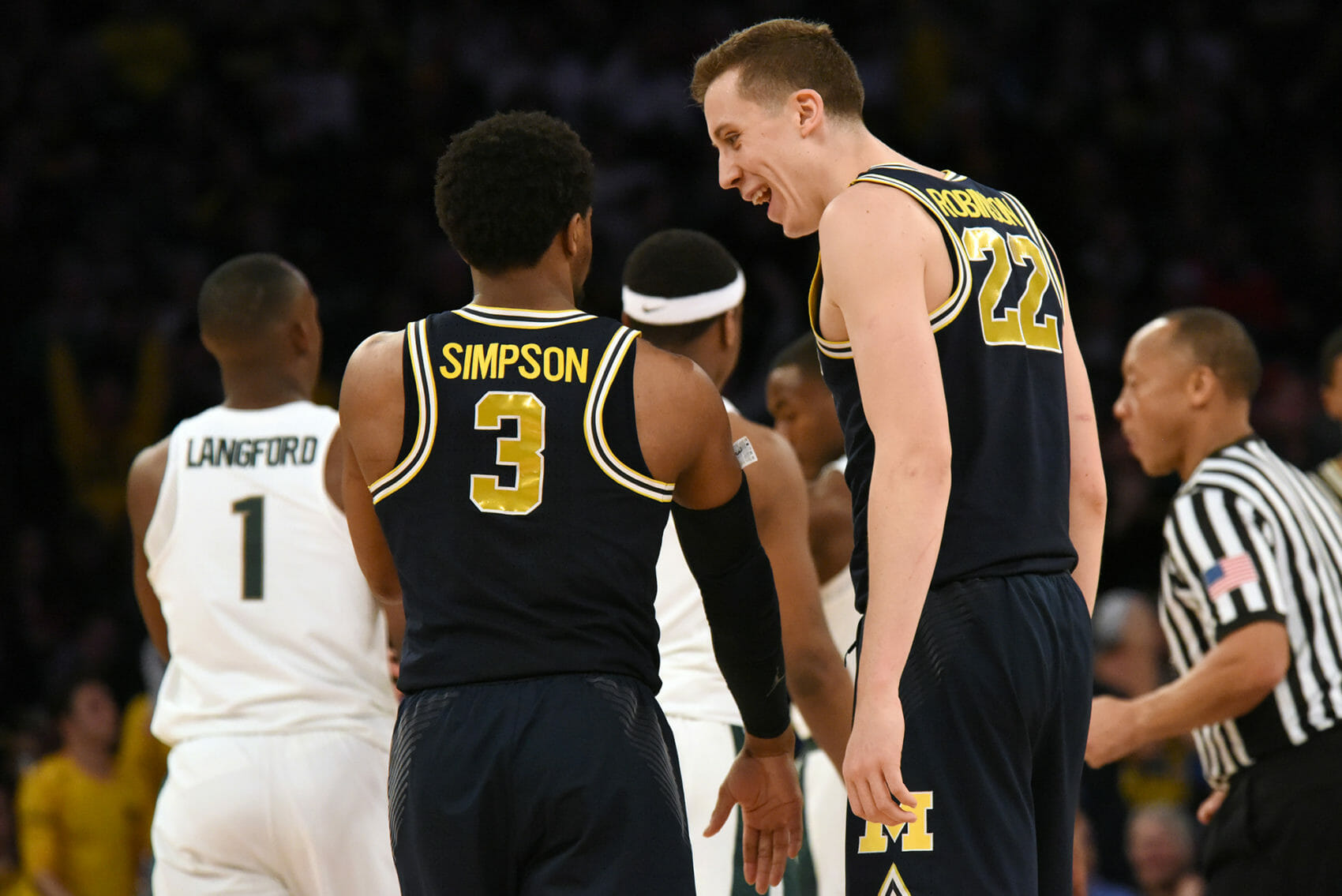 Michigan is one of the hottest teams in the country and its run through the Big Ten Tournament brought the country up to speed. The Wolverines have been off for a week, but finally know that they will face Montana on Thursday night.

KenPom’s predicted score for Michigan’s first round matchup is 70-63, but Las Vegas is higher on the Wolverines. The betting spread opened at Michigan by 11.5 and has already moved to Michigan -12. 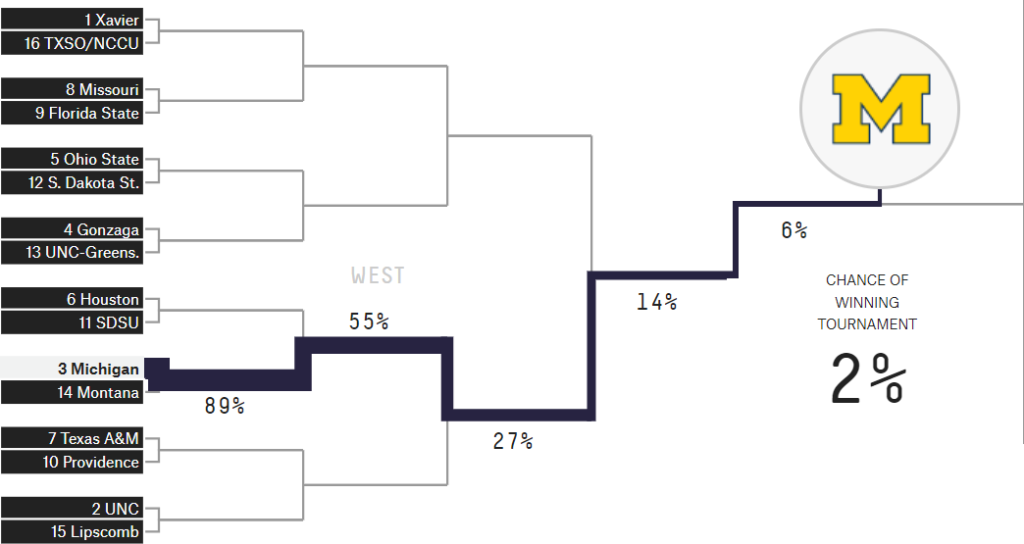 Here’s a similar analysis from KenPom. 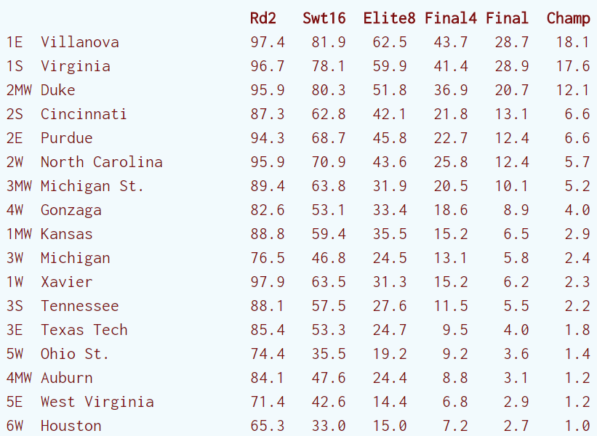 The Sporting News thinks Michigan has a shot to advance to San Antonio.

Don’t be surprised if … Michigan finds a way to get out of this bracket. Center Mo Wagner is one of the most challenging matchups in the entire tournament, and the Wolverines’ defense-first backcourt of Zavier Simpson and Muhammad-Ali Abdur-Rahkman should be effective against the teams gathered out West.

Pat Forde says Michigan is one of seven teams he trusts to win the whole thing.

Michigan (12). The way the Wolverines stormed through the Big Ten tournament served notice that they should be in it for the long haul this tourney — if the week off doesn’t mess with their mojo. This is by far the best defensive team John Beilein has ever coached, and perhaps his best rebounding team as well. Center Moe Wagner is a flourishing star who was the Big Ten tourney’s Most Outstanding Player — and he’s demonstrative enough on the court to aggravate every opponent.

One coach from the Big Sky told The Athletic’s Brendan Quinn that Montana’s guards could be tough to handle.

According to the opposing Big Sky coach who spoke to The Athletic, one who is all too familiar with this team, the Grizz are led by two guards — “a couple of pit bulls” — who will test Michigan. Ahmaad Rorie is a 6-foot-1 junior who transferred from Oregon and Michael Oguine is a 6-foot-2 junior from Los Angeles. Both are ruthless defenders. Both can shoot, but aren’t great shooters. Both attack. Both are fearless.

Best-case scenario: Final Four
Over the past month, Michigan has been playing at an elite level, culminating with RPI-enhancing victories over Michigan State and Purdue in the 2018 Big Ten tourney. The Wolverines are a difficult team to scout because of their unique offense, their low-turnover rate and their sticky brand of defense. And in Beilein, they have an expert X-and-O man calling the shots. This team is capable of a Final Four run.

Worst-case scenario: Round of 32 loss
The Wolverines’ late-season run gave Beilein’s squad a very winnable first game in the Big Dance. But the level of competition ramps up beginning in the Round of 32. If the Wolverine’s collective 3-point aim isn’t true, then they could be sent packing earlier than expected.

6.7% of all entrants in ESPN’s Bracket Challenge picked Michigan to make the Final Four.

CBS Sports writes that Houston is a good pick to upset Michigan.

2. Houston over Michigan. I think Michigan is strong enough to avoid slipping up against Montana, especially since so much of this team’s core was part of the Sweet 16 run a year ago. But Michigan’s style of play is something that Houston is used to, and Cougars guard Rob Gray is one of the most dangerous scorers in the region.

A true Cinderella is a 14 or 15 that basically know one you know in real life actually picks. Total shock factor. Montana is the team with that potential. Everyone is hot on Michigan. The Wolverines are a true 3 seed. They’ve earned it. They also don’t play until about 9:50 ET on Thursday night. Long layoff for John Beilein’s team. Montana has only dropped two games since Christmas, and it’s a pretty stingy team in the paint. Plus, Michigan is a bad free throw shooting team (65.7 percent). The chance is there.

A win over Michigan and then a potential game against Houston? The Cougars are a solid No. 6, but that’s a good opportunity for the Grizzlies to get a close game. This is the true dark horse Cinderella team in the 2018 NCAA Tournament. Ahmaad Rorie is the name to know.

The red-hot Wolverines should roll into the Round of 32 with no problem against a Grizzlies team that just isn’t on the same level. Moritz Wagner and company have the edge in scoring down low on Montana and shooting from outside, and that contributed to Montana’s minus-4.8 percent GK Factor in this long-shot matchup.

CBS re-ranked the field and put Michigan at No. 11. Bleacher Report writes that Michigan doesn’t have one of the top-25 players in the NCAA Tournament.