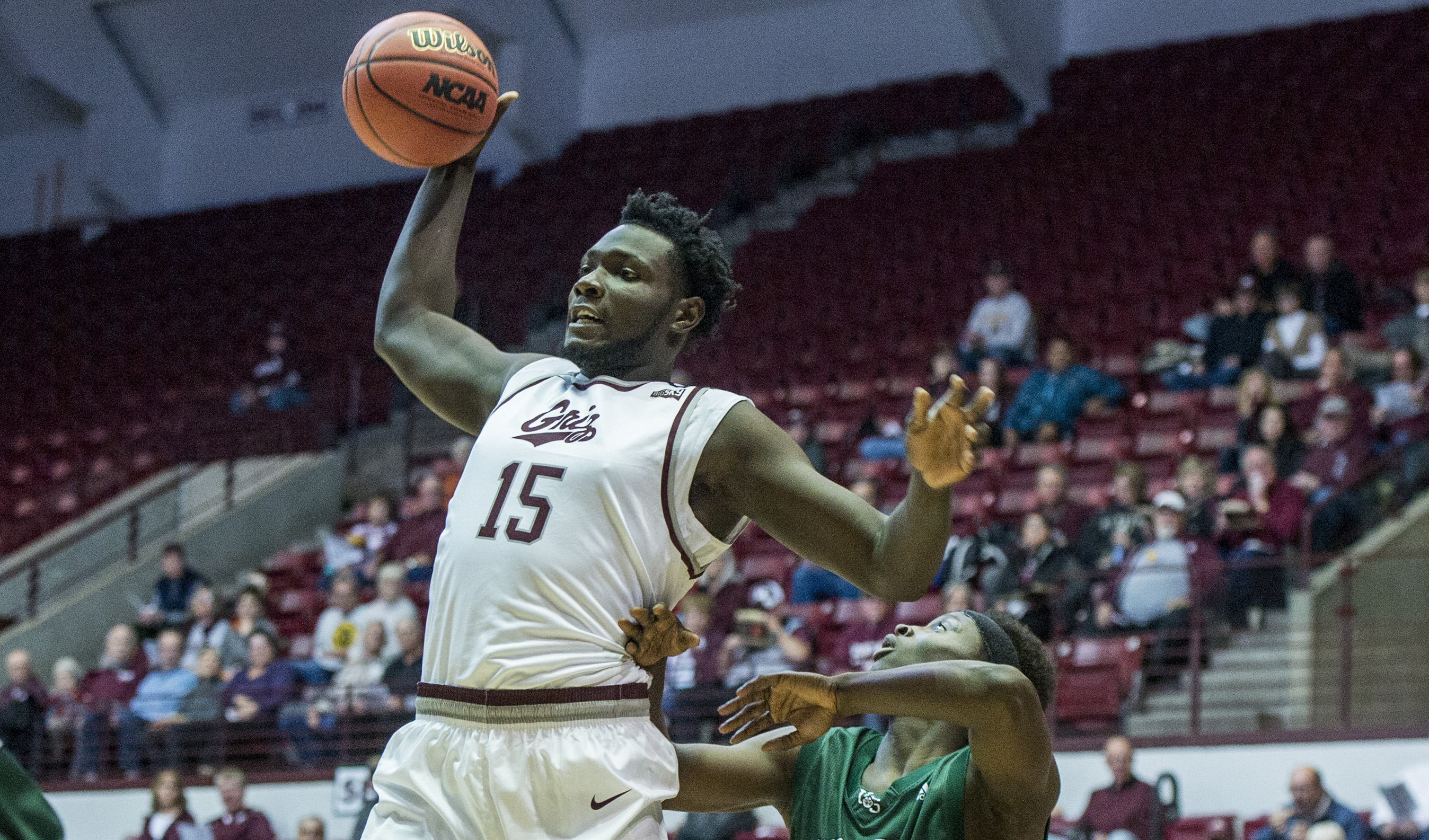 We broke down Montana’s tendencies as a team on Monday, here’s an individual look at Travis DeCuire’s rotation including shot charts, video clips and analysis.

We broke down Montana’s tendencies as a team on Monday, here’s an individual look at Travis DeCuire’s rotation including shot charts, video clips and analysis.

Rorie is Montana’s primary ball handler and a high-major recruit who began his career at Oregon. He’s blossomed into an All-Big Sky performer and leads the Grizzlies in scoring (17.2) and assists (3.7) per game.

Rorie’s efficiency numbers are very good for a player who uses 24.1% of Montana’s offensive possessions and has to create his own shot. He’s an adept pick-and-roll guard who has a lethal pull-up jumper from the elbows. He makes that mid-range jumper at an impressive 46% clip.

While his shooting numbers off the dribble are impressive, he’s a poor shooter off the catch. Rorie shoots just 28.3% (41.4 eFG%) on catch and shoot jumpers, good for the 24th percentile nationally per Synergy Sports. He’s actually better shooting the 3-point shot off the bounce than he is the catch, which is a statistical oddity that you rarely see (Jaaron Simmons had a similar profile).

Rorie isn’t just a shooter off of ball screens, he also demonstrates good vision out of those sets. His roll men aren’t the most agile, but he does a good job of finding spot up shooters and also cutters along the baseline as you can see below.

While Rorie shows some ball screen ability, the pick and roll isn’t Montana’s primary offense. The Grizzlies only use around 16.3% of their offensive possessions out of ball screens (and pass outs) which would rank 13th in the Big Ten. Montana prefers to run its offense out of the post and the middle of the floor with high-low action.

Oguine isn’t nearly as skilled with the ball as Rorie, but he’s perhaps Montana’s best at getting downhill and attacking the basket. Over half of the 6-foot-2 guard’s shot attempts come within 5-feet of the rim and he has elite quickness and first step.

Oguine is the kind of player who just puts his head down and seems to throw something up at the basket, but it goes in more often than not. He leads the team in and-one baskets on the season and has no trouble finishing through contact.

What you won’t see from him is much of an in-between game in the mid-range or much passing or playmaking abilities for his teammates.

He also gets a big chunk of his offense in transition and shows good ability to cut off the ball. He’s a guy that you have to keep an eye on when the ball enters the post because he’ll either cut to the basket for a layup or crash for an offensive rebound.

Oguine is Montana’s best perimeter defender and he’s very capable of turning a steal into a highlight dunk at the other end of the floor.

This feels like Muhammad-Ali Abdur-Rahkman’s matchup and it seems that slowing down Oguine could be as important if not more than Rorie. At times this year, Michigan has struggled to contain the sort of one-on-one “I’m quicker than you” head down attacking the rim style that Oguine plays. The Minnesota game stands out when Isaiah Washington went for 26 points on a handful of drives like Michigan might see from the Montana combo guard.

Montana’s base lineup starts two big men and Akoh is the widest body on the roster. He beats his opponent before the ball is even thrown to him with his ability to root out space and establish position. By the time he catches it, he’s going up to finish through contact.

He’s not especially skilled down on the block, but he doesn’t really need to be either. He uses the basket effectively to protect his shot despite the fact that he’s just an average athlete.

He’ll attempt the occasional jumper from away from the basket, but that’s a shot that he should be allowed to take all day. He’s shooting just 25% of jumpers more than 5-feet from the rim.

Montana runs a lot of offense through the post and loves to utilize Akoh in high low sets like this.

Akoh is also the best offensive rebounder on the roster and he accomplishes that with his ability to create space and grab boards even below the rim.

While Akoh will challenge Moritz Wagner with his physicality around the basket, he certainly doesn’t look like the sort of player who can keep up with Wagner on the perimeter. The way that Montana plays its two bigs reminds me a bit of Purdue last year when the Boilermakers insisted on playing Caleb Swanigan at the four position.

Akoh is not fleet of foot, but there’s at least a chance he could get Wagner into foul trouble. Akoh is ranked 72nd nationally in fouls drawn per 40 minutes at 6.2 and 19th nationally in free throw rate (FTA/FGA) at 67.5%.

Montana’s other big man is a senior from Australia who is almost 24 years old. He’s the other half of Montana’s two-post look and will have all of the same problems trying to defend Michigan.

Perhaps Akoh or Krslovic can give Michigan’s four — whether it is Duncan Robinson or Isaiah Livers — some issues, but Michigan should be well prepared to make them pay with that matchup on the other end of the floor.

Krslovic has a fairly rudimentary post game, generally trying to muscle into his defender before going with a simple right or left-hand hook.

But the key to everything Montana does is how the two bigs play together. Both big men look for each other on the block whether it is a high-low action or a simple cut and pass to beat a double team like this.

Opposing coaches called Moorehead the x-factor for the Grizzlies in this story at The Athletic and he fits the bill. He’s a guy who takes more than twice as many threes as twos and is Montana’s designated shooter so to speak. He’s a 3-point attempt or layup player who shoots 35% from deep but struggles to finish at the rim. He’s very right hand dominant, especially around the basket and has problems finishing at the left side of the rim. 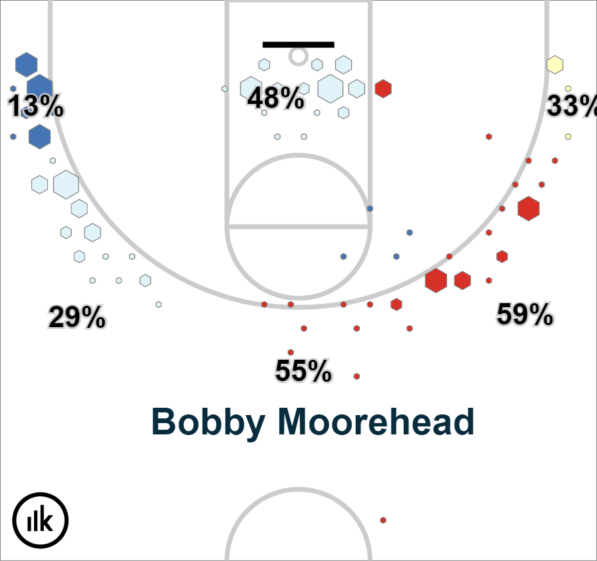 Montana doesn’t play a deep bench and Falls is the reserve option at the guard spots. He’s a freshman guard with a smooth jumper with enough skill to attack an overaggressive close out.

Falls has roughly a 50-50 split between 2-pointers and 3-pointers, but you can see in this clip that he won’t hesitate to put the ball on the deck and make something happen (before eventually getting the ball back and knocking in a three).

The freshman guard has some swag to his game as well and he’s the second-best passer on the roster. Here you can see him with the behind-the-back transition assist.

Falls is very good on limited attempts around the rim and loves to shoot from the right side of the floor.

Pridgett is Montana’s sixth man in the frontcourt and plays around 20 to 30 minutes per game off the bench. I’d expect this to be a game where he plays a lot of minutes in order to match up with Michigan’s four-out offense. Pridgett is essentially Montana’s small ball four, but he’s also probably their best option to guard Charles Matthews.

The Grizzlies will still run all of their two-post offense with Pridgett, but by utilizing him as the second post they can match up with Michigan more comfortably.

He’s not a shooter — 3-of-15 from 3-point range — but he can knock in long 2-pointers from the baselines fairly effectively. His bread and butter is finishing around the basket, defense, and rebounding.