After nearly two weeks of waiting to finally play basketball, Michigan took the floor and was whistled for a traveling violation on the jump ball.

It was that kind of night in Wichita as the Wolverines slogged their way through one of their worst offensive performances of the season.

The late night session at Intrust Bank Arena was mysteriously delayed by 20 minutes and then featured an extended delay due to an outage at the scorer’s table. Those delays combined with extended NCAA Tournament media timeouts and halftime led to a game that didn’t end until 12:40 a.m. back home in Michigan.

While the final 61-47 score line suggests a routine win, there was an element of Murphy’s Law to the opening four minutes. Zavier Simpson was whistled for two fouls and Montana jumped out to a quick 10-0 lead. Michigan’s backup point guards helped right the ship with 16 quality first half minutes and the Wolverines outscored the Grizzlies 61-37 over the final 36 minutes.

The product on the floor couldn’t match the nightlife in Wichita, KS on a Thursday evening which led to a half empty building that was never quite engaged. The loudest cheers of the night were boos when the officials whistled for a media timeout immediately after a long delay. 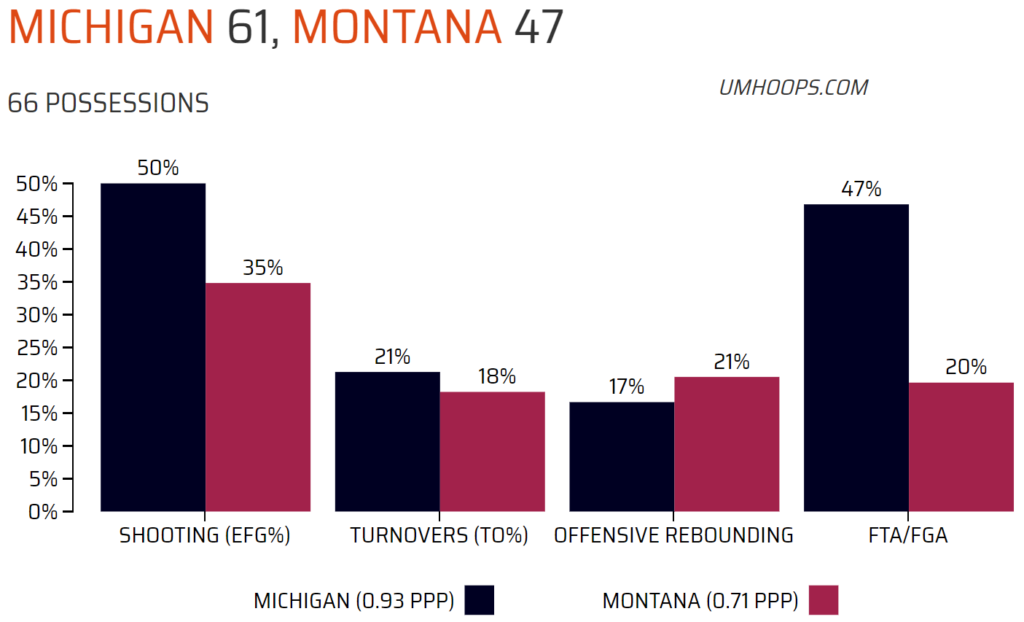 Michigan’s defense was as advertised. The Wolverines held Montana to its worst offensive performance of the season at just .71 points per possession. When you hold another team scoreless for nearly a quarter of the game, obviously you are doing something properly.

The dominant defensive performance carried Michigan to the win on a day when the offense wasn’t working. It also pushed Michigan’s adjusted defensive efficiency ranking up to 3rd in the country.

Montana shot just 37% on 2-pointers and 20% on 3-pointers for a brutal 35% effective field goal percentage. Truth be told, Montana’s offense wasn’t all that dynamic. The two post high-low game that the Grizzlies like to utilize was ineffective throughout the night as Moritz Wagner, Duncan Robinson, Isaiah Livers and Jon Teske held their own. Montana’s guard duo of Ahmaad Rorie and Michael Oguine got loose a bit in the first half, scoring 21 points combined, but they only managed to post 9 points in the second half after Zavier Simpson returned from foul trouble.

Michigan’s offense just never found its rhythm. The Wolverines did eventually crack Montana’s trapping action against the high ball screen, consistently working the ball to the big in the middle of the floor where he could find Charles Matthews cutting along the baseline. That adjustment helped Michigan regain control of the game, but sloppy turnovers — especially in transition — prevented the Wolverines from ever really putting it away.

Michigan turned it over on 21% of its offensive possessions and made just 14-of-22 free throws — the sort of unforced errors that could send it home on Saturday rather than booking a charter for Los Angeles next week.

There’s no such thing as a bad NCAA Tournament win and the results on any given Thursday or Friday in March will remind you of just that. Winning six games however you can manage is the goal and Michigan got the job done tonight even if it wasn’t all that fun to watch. This was easily a game that Michigan could have lost and the 10-0 run out of the gate served as a wake up call.

The closest comparison I can think of is Michigan’s NCAA Tournament opening win over Wofford in 2014, that game saw Michigan score just 57 points in 56 possessions in an ugly 57-40 win.

Next up is a Houston team that is playing some of the best basketball in the country and won a thriller thanks to Rob Gray’s game winning layup with 1.1 seconds remaining. Gray scored 39 points in the victory and is one of the best ball screen guards in the country. Once again, the Wolverines will have to wait. Saturday’s game won’t tip until 30 minutes after Kansas and Seton Hall face off at 7:10 p.m. 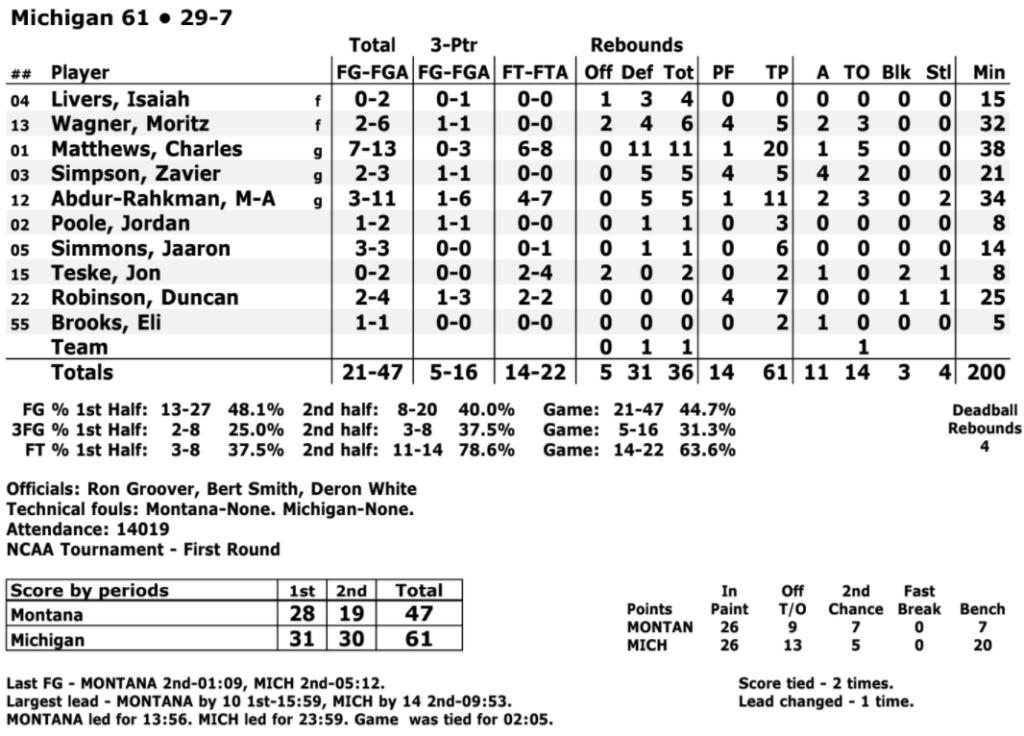