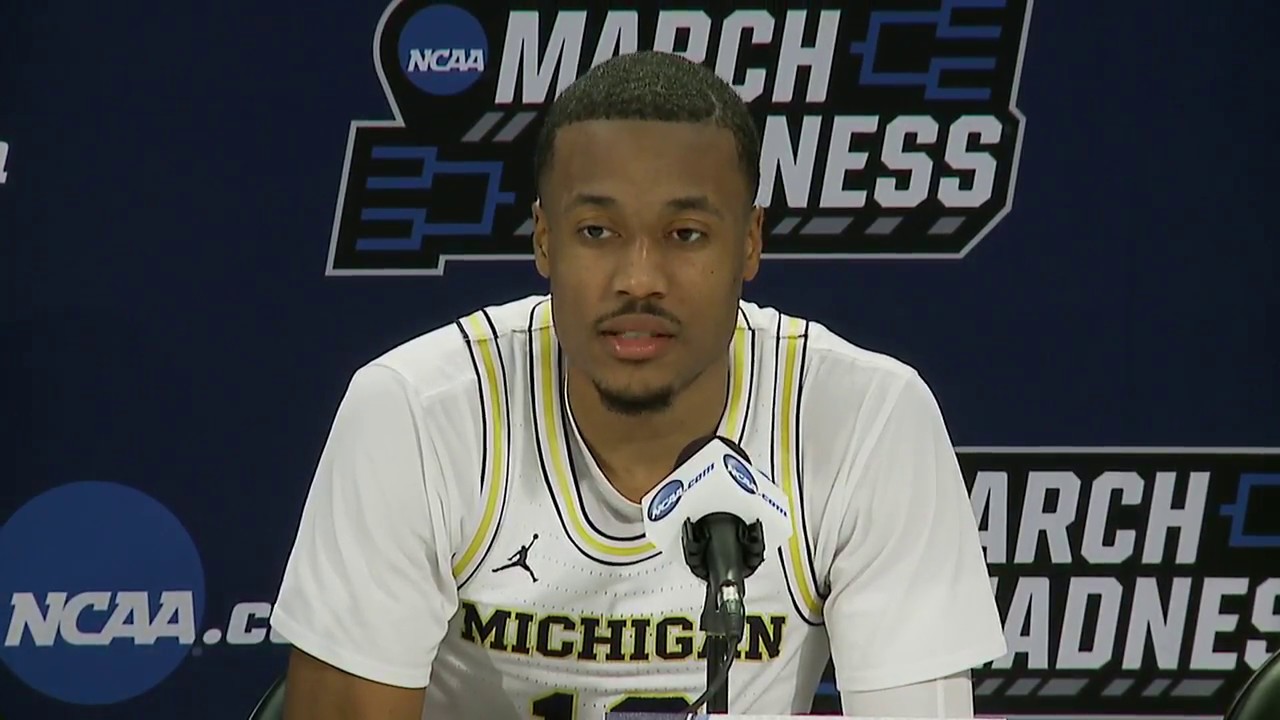 John Beilein was joined by Charles Matthews and Muhammad-Ali Abdur-Rahkman on the podium after a late night win over Montana.

John Beilein was joined by Charles Matthews and Muhammad-Ali Abdur-Rahkman on the podium after a late night win over Montana.

COACH BEILEIN: Yeah, but I was really impressed with Montana. I thought they had a great defensive performance as well. They have a really good team. I think they only have a couple of seniors on the team. They really represent that university very well. I’m really pleased that we could get that win over them.

And they didn’t make us look very good on offense. Fortunately our defense was outstanding when it needed to be. Down 10-0, and after that they scored 37 points the rest of the game.

So really pleased that we were able to still get a W despite the great defense Montana played.

THE MODERATOR: At this time we’ll take questions for the Michigan student-athletes.

Q. Charles, Coach Beilein talked about the tough defense Montana played. Seems like a lot of the players were kind of struggling early on. You kind of had it going. Did you sense that you had it going and tried to force the action a little better, or is that just what the defense gave you?
CHARLES MATTHEWS: No, I was just really playing off the offense. Just reading what the defense gave me. I saw they was missing a lot of our bigs and ball screens and I was just cutting behind them.

Q. Mike Oguine and Ahmaad Rorie had pretty good games today, but not big enough. How did you guys adjust to them and keep them under wraps the rest of the game?
MUHAMMAD-ALI ABDUR-RAHKMAN: We just made some halftime adjustments. They got a couple of easy buckets on us at the beginning of the game. We went to halftime, made some adjustments, played more team defense and get in the gaps and things like that, and that gave them trouble.

Q. Have you guys played a defense as tough as them this year, and just how would you describe what it was like going up against that defense?
MUHAMMAD-ALI ABDUR-RAHKMAN: I would compare them to Illinois. They press. They try to take everything away from you. They get after you. They’re a lot like Illinois, I would say.

CHARLES MATTHEWS: Yeah. I would go with what Muhammad said. They’re pretty much like Illinois, very scrappy team, up in the passing lines, making it tough to get entry passes. Teams like that can make it tough for our offense, but I feel we did a good job against it.

THE MODERATOR: Questions for our coach?

Q. Coach, you mentioned you fell down 10-0 at one point. I think it was 16 minutes to go, you’re down ten, you have four reserves on the court. Is that just a testament of how comfortable you are with your reserves?
COACH BEILEIN: Yeah. I think our huddle was like a normal huddle, right, because I really trust that these guys know what’s going on. And we’d missed a couple of shots, but we just had to make some adjustments and just hang in there and stay persistent with what we do.

So I love the way they responded step by step and not try to get it all back at one time.

Q. At what point did you feel like — I mean, you were down early. At what point did you feel like the momentum was starting to shift in your favor?
COACH BEILEIN: There was a point in the first half I thought it was going to switch a little bit, and then they made a three before half. And we got confused on a play. So I should have called a timeout right before half, but I didn’t. Then coming out of the second half, when we got stop after stop after stop starting the second half, even though we didn’t convert a lot, I hated that long timeout when the power went out when we were up by eight, because we didn’t score for a while after that. But there was — I guess coming out of that second half I thought it was key the way we guarded coming out the second half.

Q. Early on it seemed like their ball screen trap was giving you guys a little bit of trouble, and then you started finding space near the foul line, and then Charles cutting to the rim. Was that something you noticed on tape and then it just took a couple of minutes to get comfortable with it, or is that something you noticed as the game started?
COACH BEILEIN: No. What I love about what Travis has done with his team is they will guard ball screens — we said they’re going to do everything. So in two days we were trying to get ready for everything, and that was one of them, that they came out and trapped us hard.

Q. You mentioned that your guys didn’t quit. They showed composure, but what else do you take away from a game like that?
COACH BEILEIN: I love the fact that Charles Matthews, who just played a little bit maybe in the Kentucky NCAA game, went to the foul lane, went 6 for 8. They fouled him. Then he got to the rim. He really just did a great job. He was composed. I thought that was good.

I thought our bench — you know, Zavier hasn’t had two fouls. I mean, you can see they’re going to call them close in the NCAA. We haven’t had Zavier with two fouls at all the entire season. So when he ended up getting in foul trouble, Jaaron Simmons came off the bench and was terrific. Had three baskets. And I think that might be his high of the year for six points. He came in and really performed well. He needs a rest. He hasn’t played a lot. So Eli Brooks goes in there and gets an assist. It was really good. Jordan Poole came in and hit a three, which he had struggled in the Garden. So I love what we got off the bench there.