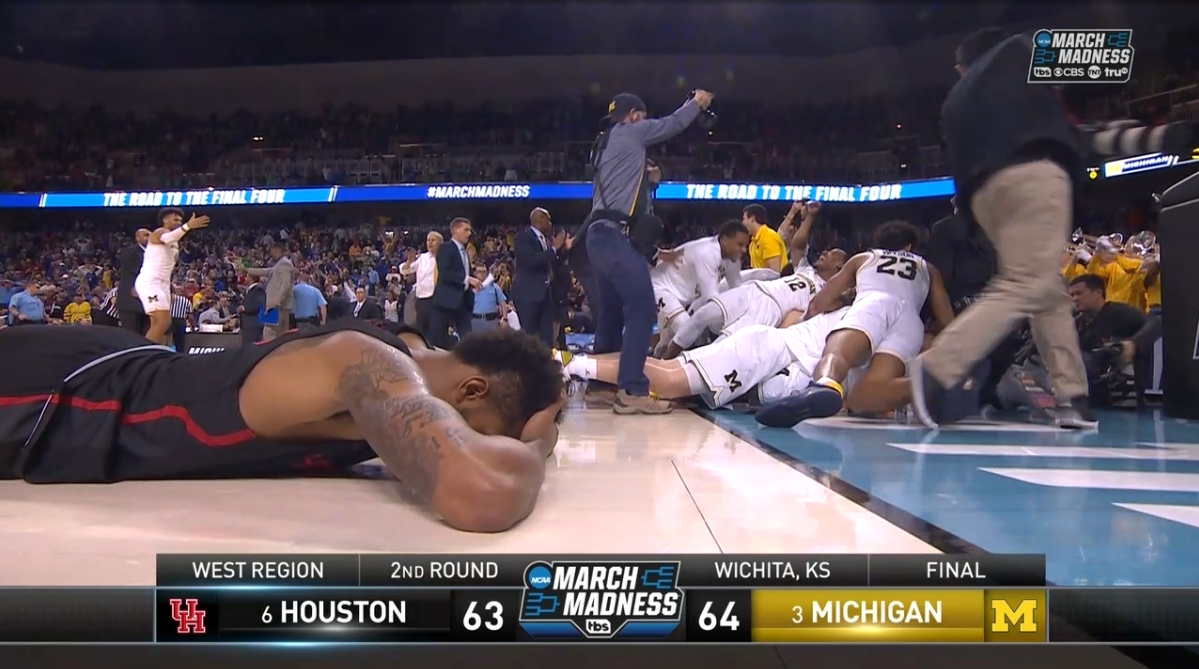 Jordan Poole sent Michigan to the Sweet 16 with a buzzer-beating jumper.

Charles Matthews couldn’t find any other words as he sat sprawled across his locker yelling to no one in particular.

And really, what else was there to say? This was basketball in its purest and most unforgiving form. Somehow, Michigan won. Houston lost. It didn’t really make any sense, but that’s how the ball bounced and the horn sounded. Careers were over. Heroes were made.

Muhammad-Ali Abdur-Rahkman missed a layup he would make 7 times out of 10. Devin Davis missed 3 free throws in a row after he made his first 9 of the game. Then Jordan Poole made a 30-foot contested 3-pointer at the buzzer to send Michigan to the Sweet 16.

It was a shot that Poole claims he hits “all the time” and he was quick to cite that he’s “5-of-6 on game-winners in practice.” To everyone else, it was a miracle.

If the game didn’t make any sense, the pairing of John Beilein and Jordan Poole makes even less. Poole is brash, confident, easy going and cocky. His head coach says his swag ranks in the top 1 percent of any players that he’s coached over his lengthy career.

Beilein is calculating and meticulous. He carefully plots out every minute of Michigan’s gameday agenda. He scripts the play that won Michigan the game into practice every three or four days. (It doesn’t usually end with a Jordan Poole 3-pointer).

But when it comes down to 3.3 seconds that will go on to define careers, sometimes it takes a Jordan Poole 3-pointer to finish the job. 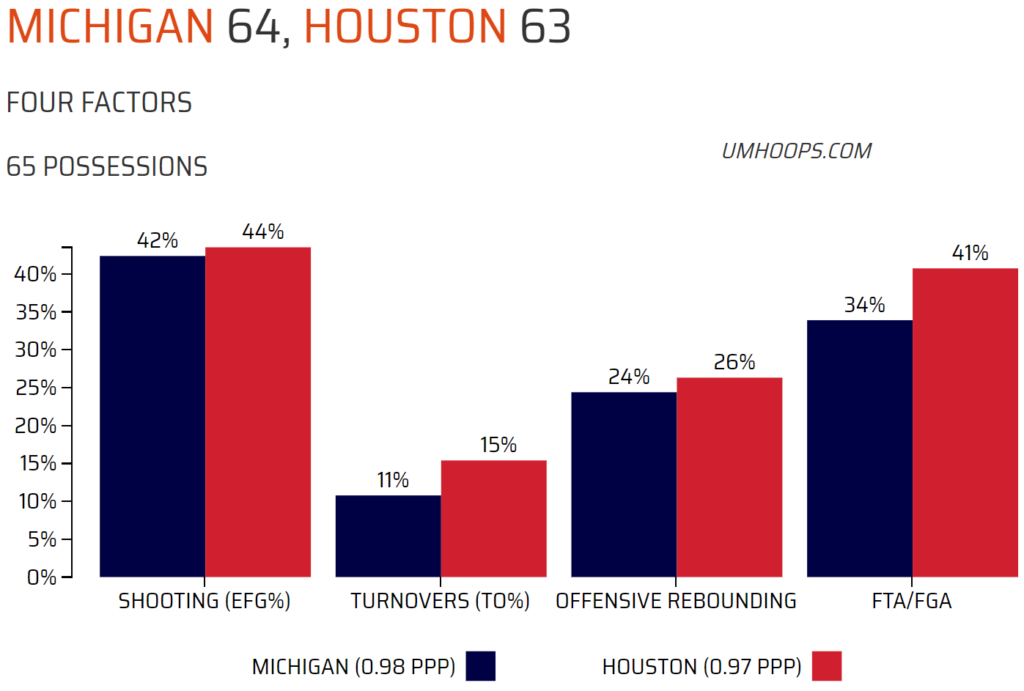 On Thursday night against Montana, I thought Michigan’s poor offensive play was a product of its own issues. Tonight, Houston played one of the best defensive games that I’ve seen against Michigan. The Wolverines managed to score just 64 points in 65 possessions in the victory. They needed every one of them and none of them came easy.

But this isn’t a normal Beilein team. This group of Wolverines played two offensive stinkers in Wichita, but figured out how to escape with victories despite odious shooting performances. Michigan attempted 30 3-pointers on Saturday night and made only 8 (27%). The eighth one won the game and kept the season alive. Michigan didn’t turn the ball over, took the right shots, but they just didn’t go in.

It was Michigan’s defense that got the job done once again. The Wolverines held Houston to .97 points per possession in another impressive defensive showing. Rob Gray got his 23 points, but he needed 22 shot attempts and turned the ball over three times. Michigan did a great job of limiting Houston’s shooters as Armoni Brooks and Corey Davis were just 2-of-6 from 3-point range on the night.

How well did Michigan’s defense play? Houston shot just 36.1% inside the arc.

If Michigan lost this game, it would have been because of its inability to keep Houston off the line and stay out of foul trouble. Houston attempted 22 free throws and the Wolverines were whistled for 22 fouls.

The cruelty of this game is that Devin Davis was the primary reason that Houston was in position to win the game in the first place. Davis had 17 points and 7 rebounds. He had finished a critical and-one to foul out Duncan Robinson. He shifted over to play the center down the stretch and allowed the Cougars to switch everything and was able to bother Moritz Wagner.

Michigan won this game to punch its ticket to its second consecutive Sweet 16 and John Beilein was in the locker room lamenting the fact that Michigan was making the same mistakes tonight that it made during its 7 losses this year. The Wolverines didn’t play well offensively by any definition and they are going to have to figure something out before a Thursday night game in Los Angeles, but that’s a much better way to spend Monday than cleaning out their lockers. 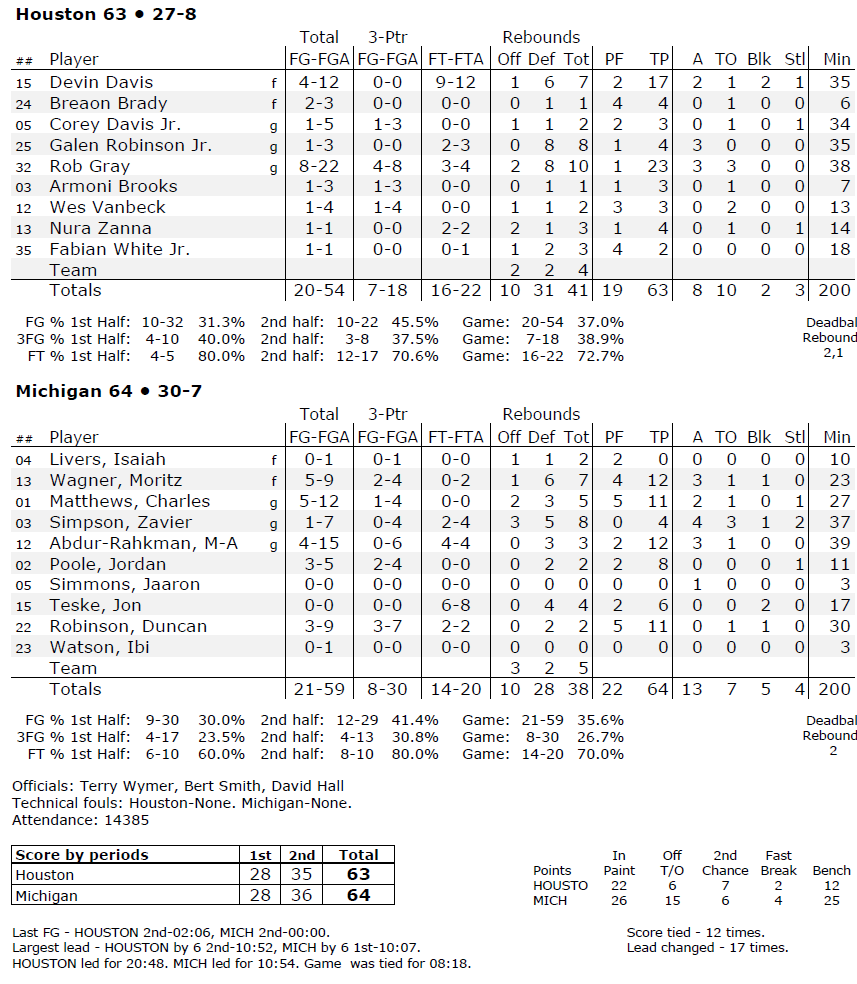