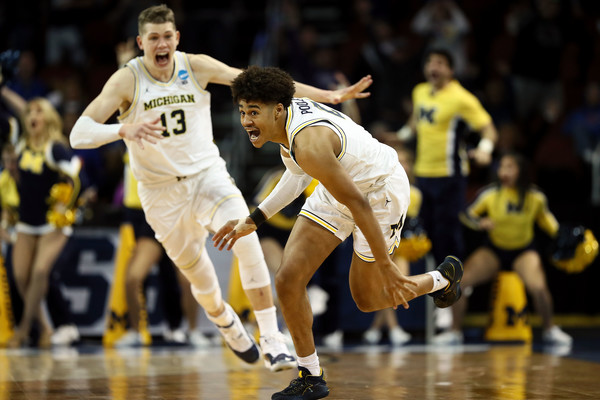 WICHITA, Kan. — There was one section of Michigan fans at Intrust Bank Arena on Saturday night. Jordan Poole ran straight into them.

After the shot, after a pile had formed and dissipated on the baseline, after one of the worst games the Wolverines have played in recent memory and after one of the most unforgettable wins in program history, there was nothing else left to do.

Muhammad-Ali Abdur-Rahkman found Poole on the right wing as time wound down and desperation was in the air. Michigan was down two points and there was no choice but to shoot. Poole rose, released and hit a career-defining shot as the buzzer sounded. Game over. Season extended.

“I kinda feel that every shot that I’m (gonna) shoot is going in,” Poole said. “… I just kinda put it up there, but I just kinda saw, just, the bench go crazy.”

Charles Matthews’ tip-in had rolled off the rim with just over 24 seconds to go, and it seemed like Michigan had lost its chance at victory. The Wolverines were gifted another with an open Abdur-Rahkman layup — one the senior makes every time. It hung on the iron, then fell off with six seconds to go.

Rob Gray, the guy Michigan had to contain, notched 22 points, 15 of them in the second half. Matthews and Duncan Robinson both fouled out. Moritz Wagner played 23 minutes and was in foul trouble for all of them. The Wolverines chucked as many bricks from beyond the arc as made shots, then added in a couple airballs to boot.

Duncan Robinson had been facing his own basketball mortality since the bus ride to the arena and the end was never closer. Moritz Wagner was 3.9 seconds away from walking off the court for what could very well be his last time in a Michigan uniform. The Wolverines — one of the hottest teams in the country, one that hadn’t lost since early February at Northwestern — were two Devin Davis free throws away from their season vanishing into Just Another Second Round Loss.

And then they weren’t.

Davis missed both free throws and Poole, who had made just one 3-pointer in his last six games, put an end to The End with a 28-foot shot that put the improbable on the scoreboard. Michigan 64, Houston 63.

“I don’t think I’ve ever cried tears of joy,” Robinson said, “but I was damn close.”

Robinson had fouled out all of three times in his career before Saturday. After doing so for the fourth time, he sat on the bench as its death seemed imminent.

“I thought I was watching my final seconds of my career tick off the clock,” he said. “… Couldn’t believe it went in, of all people, JP to hit it. It’s like, it’s a joke. It sounds like it might be written or something.”

“It’s the greatest feeling you can ever imagine,” added Wagner. “I didn’t think I would ever say that chasing Jordan Poole around is the greatest feeling I’ve ever had in my life, but it’s an incredible feeling because we know we won, you know. That’s all over with. I saw (Poole) falling, so, maybe he’s gonna get three free throws, you know. I’d take that.”

There was no need to make such a bargain.

The play itself was as routine as any play gets with the season on the line. The Wolverines already used it with success earlier this season, as Abdur-Rahkman got to the line for decisive free throws against Maryland back in mid-January.

Earlier in the game, Poole passed up multiple triples — the type of pull-up shots he has a well-earned reputation for taking — and looked for options under the basket, the sort of play John Beilein has drilled him into making.

But, when Michigan broke its huddle and looked for something, anything, there was no better option. Poole had made the same shot he was about to take with regularity in practice.

“I knew they were not gonna let me shoot the ball,” Abdur-Rahkman said. “So I was looking for JP.

Poole went from a yard beyond the 3-point line to the baseline in the time it takes to blink. The entire bench, emotion personified, took him there. Devin Davis laid on the floor facedown, having been rushed into an unpleasant role that was supposed to be Abdur-Rahkman’s.

“If (Poole) doesn’t make that shot,” Wagner said, “it’s us laying on the floor.”