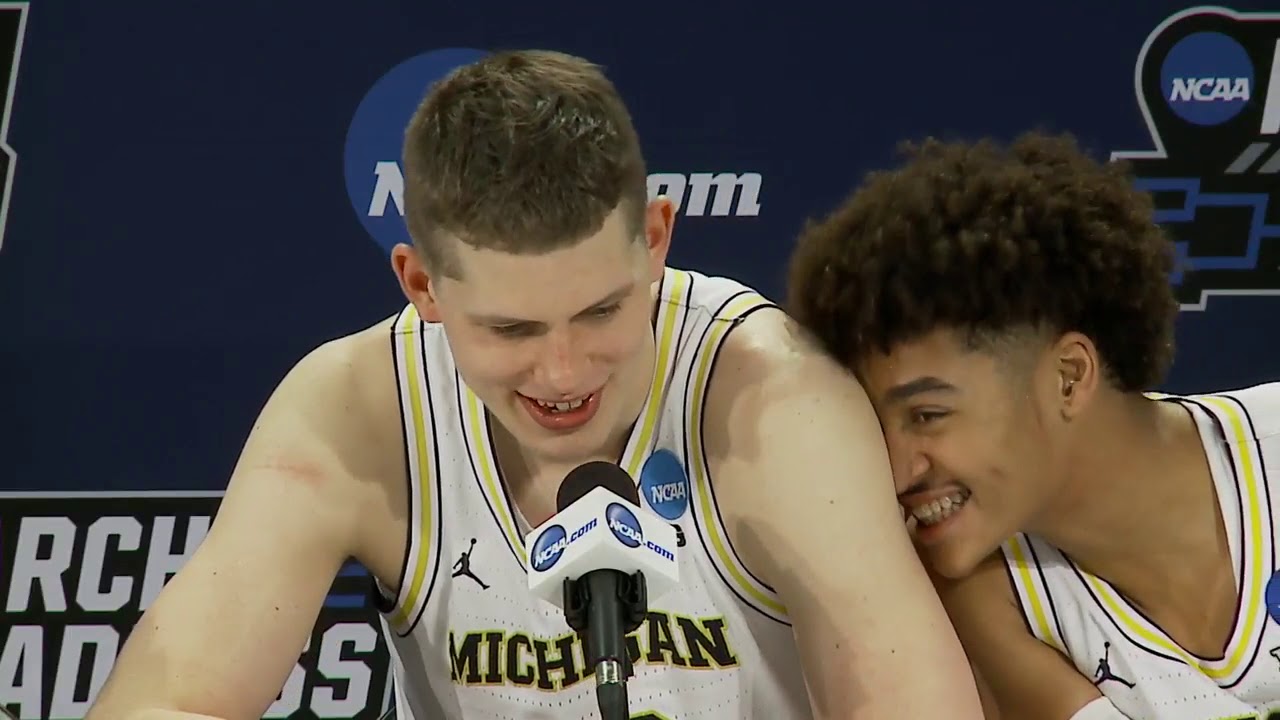 John Beilein was joined by Moritz Wagner and Jordan Poole for his post-game press conference.

John Beilein was joined by Moritz Wagner and Jordan Poole for his post-game press conference.

COACH BEILEIN: Obviously that’s hard to believe. We’ve been coaching a long time, and very few of the times have we had a win like that where Duncan and Muhammad over there are thinking their college career is over and all of a sudden we come out with a win.

But credit Houston. They were tremendous defensively. They kept giving us different looks. And really just so blessed to feel that we can come out here with a W and keep our season going.

Q. Jordan, could you just try to describe what that felt like when that shot goes? Your whole team was kind of chasing you just running around the court. What was that like?
JORDAN POOLE: Yeah. After the shot went in I didn’t know it went in. I looked at the bench. I was always thinking if I hit a shot like that I didn’t want to get tackled. So I was kind of trying to avoid everybody, but I gave up and they tackled me and it was an amazing experience.

Q. Jordan, can you describe how that play unfolded that led to the basket?
JORDAN POOLE: Yeah. We work on that play thousands of times in practice and we executed it perfectly, especially from the inbound pass and getting it to our senior guard, Muhammad. And Ham could have put the shot up easy, but he had the confidence to find me, and I just knocked the shot down.

Q. Kind of a followup to that, you mentioned that you practiced that a lot. Are there other options? Muhammad bringing the ball down. I saw Mo running around, people running around in circles, it seems there were a lot of options, or was the plan to get you the ball?
JORDAN POOLE: They were definitely a secondary option if we weren’t able to get the ball to Ham, we had another guy coming up and we were going to try to get it to Mo after that and put the ball in Mo’s hands. But the first option worked and we were able to make the shot.

Q. Coach had said, I mean he thought certain guys had their college careers over. Can you describe the swing of the motions?
MORITZ WAGNER: Yeah, that’s basically all I thought about. I saw Duncan fouled out. The look on his face. I mean, I’ve been there when you’re not on the court and you can’t really help. And I told him we got you. And somehow we ended up, yeah, it was enough. So that was the only thing on my mind, get another game or two or three or four for our seniors.

Q. Jordan, I think your last five games you scored a total of 10 points. How did you have that confidence to take that shot?
JORDAN POOLE: That’s kind of been my motto all year, just having confidence. And I think the guys on the team know that I never lose confidence and you just gotta always be ready for the opportunity and for the moment. And like I said, we practiced it, and Coach really stresses it, and he was able to draw up an amazing play for us to come on top with the win.

Q. So you said so you weren’t the first option on that play, so did you go in there thinking I’m going to get this shot?
JORDAN POOLE: I definitely was thinking whoever shoots it, I hope it goes in. That’s really all it was. But, I mean, in situations like that, you just kinda gotta be ready. And I definitely thought Ham was going to shoot it but I saw that he kind of got swarmed by defenders and I tried to find a gate to get open, and I just hit the shot.

Q. Again, Mo, you saw what happened to Virginia last night. They won the ACC tournament. You guys had the momentum of winning the Big Ten tournament. How does this top what you were able to do in the Big Ten?
MORITZ WAGNER: Yeah, I was just thinking about how many great moments I’ve had in the past three years here, and this one is definitely up there, chasing Jordan Poole around the court, who would have thought. I don’t know. I’m kind of speechless. There are a lot of emotions going through my head right now. The way we played, having this outcome, very proud of this team. And very, very happy.

Q. Just one other. This is more for Mo. Mo, was he doing something we couldn’t see? It seemed like you and Jon had opportunities to get the ball on the post but the ball didn’t find its way there. Was there something going on that we couldn’t see or was it just that there were openings elsewhere?
MORITZ WAGNER: I think that’s just been something both of us gotta get better at. Been a topic all year, I think, since they switched ball screens. So that’s something we gotta work on. But I think we found some solutions down the stretch, did a great job in the post and found a way to score enough points to win.

Q. Jordan, are you one of those guys who watched the tournament a lot growing up? Can you just put into words what it means like to be that guy who hits the game winner after I’m sure probably seeing it?
JORDAN POOLE: Yeah. Definitely as a kid growing up you used to watch stuff like this all the time and like this is stuff that you dream about. And you will see Trey Burke hit a crazy shot like this against a Kansas game and you see game winners all the time, and this is just like what March is for. I mean, I’m kind of speechless right now, but I just want to say by the grace of God we came out with the win.

Q. Coach, tell me a little about the play. I saw that I guess you called Indiana. How much do you work on that play?
COACH BEILEIN: Not thousands of times like he said. But we do work on it. There’s probably periods every day we do specials, and that’s one of them. And there’s three or four different options to it. So many times it’s left us short or done whatever, but it’s been good to us on a few occasions.

Q. Coach, you’ve had a lot of tremendous post-season moments. How does this compare to some of them?
COACH BEILEIN: I am. I’m a little speechless right now. I’m just trying to just appreciate the moment of what just happened. You know, when he makes that shot, you know, I am like making sure that the clock went off. I’m trying to manage the team. I can’t even look at the celebration of what’s going on. And it’s just — we did not play well tonight. We did not play well at a couple of positions tonight. We had tough games. And credit Houston for that. And so sometimes you feel, well, why did we win? We were fortunate. But you know what, I’ve been on the other end of those type of plays many, many times, and it flipped and we got the great fortunate break.

I mean, Devin Davis is a really good foul shooter, right, and he misses the two to put us in that situation. So I feel bad for Houston because they played so well.

At the same time really happy for Michigan, our university, our program, all the families, mostly the players, that they get to continue to play.

Q. Yeah, just one quick followup. You mentioned you practice that play a lot. How often does it work in practice?
COACH BEILEIN: We usually get a shot on the rim. But like I said, that’s — we went to the first option again. First, you gotta have a good guy that can throw a baseball pass, and Isaiah Livers actually is a baseball player. One of the few guys on my team that knows how to play baseball, which is really sad, by the way. But he can really throw the ball and he put it on point. But there’s this action happening that just creates confusion, but our kids aren’t confused. They know where everybody is supposed to be. So we’re just fortunate. I put great shooters out there in the event that we couldn’t get to the rim we could win the game. So in 3.4 seconds, I think it was 3.1, if you catch the ball at half court you can get right to the rim. But they double teamed him. And that’s when he found Jordan.

Q. Coach, I know his minutes went up later in the year, but the last five games he scored a total of 10 points. What does it kind of say about the kid’s confidence to take a shot like that with such confidence?
COACH BEILEIN: We had him in the scout team earlier in the year because he was still growing and was not a guy that was in our top 9. And the shot clock would get down and, you know, the first team’s all excited they’re going to get a stop and he’d put in a buzzer shot. We scrimmaged last Friday. He hit a half-court shot in scrimmage at the buzzer, and then he won — they were down two, and he won the game with a three-pointer at the buzzer as well. So that’s what he does. I mean, he’s got a lot of confidence, and he’ll tell you about it, too. He’s not afraid to speak his mind. And he’s a wonderful young man who’s growing every day. It really can be fun to watch his growth over his time at Michigan.

Q. Right. So earlier in the year there was a chance he could redshirted?
COACH BEILEIN: No, no. He was on scout team which means in the first — November and December and October he wasn’t playing well enough to be with the top 9. So we have our scout team, which is 6 or 7 guys, and then we have the top 9 or top 10. He wasn’t in the rotation because he was learning so much about basketball that he wasn’t helping us. He was going to help us win games, but he matured. He got better. He’s grown in his game. And he helped us really win games in January. He came in and was terrific in some games. But he’s also had some games just like many typical freshmen, they struggle at first to grow, and once they start growing, they get better and better.