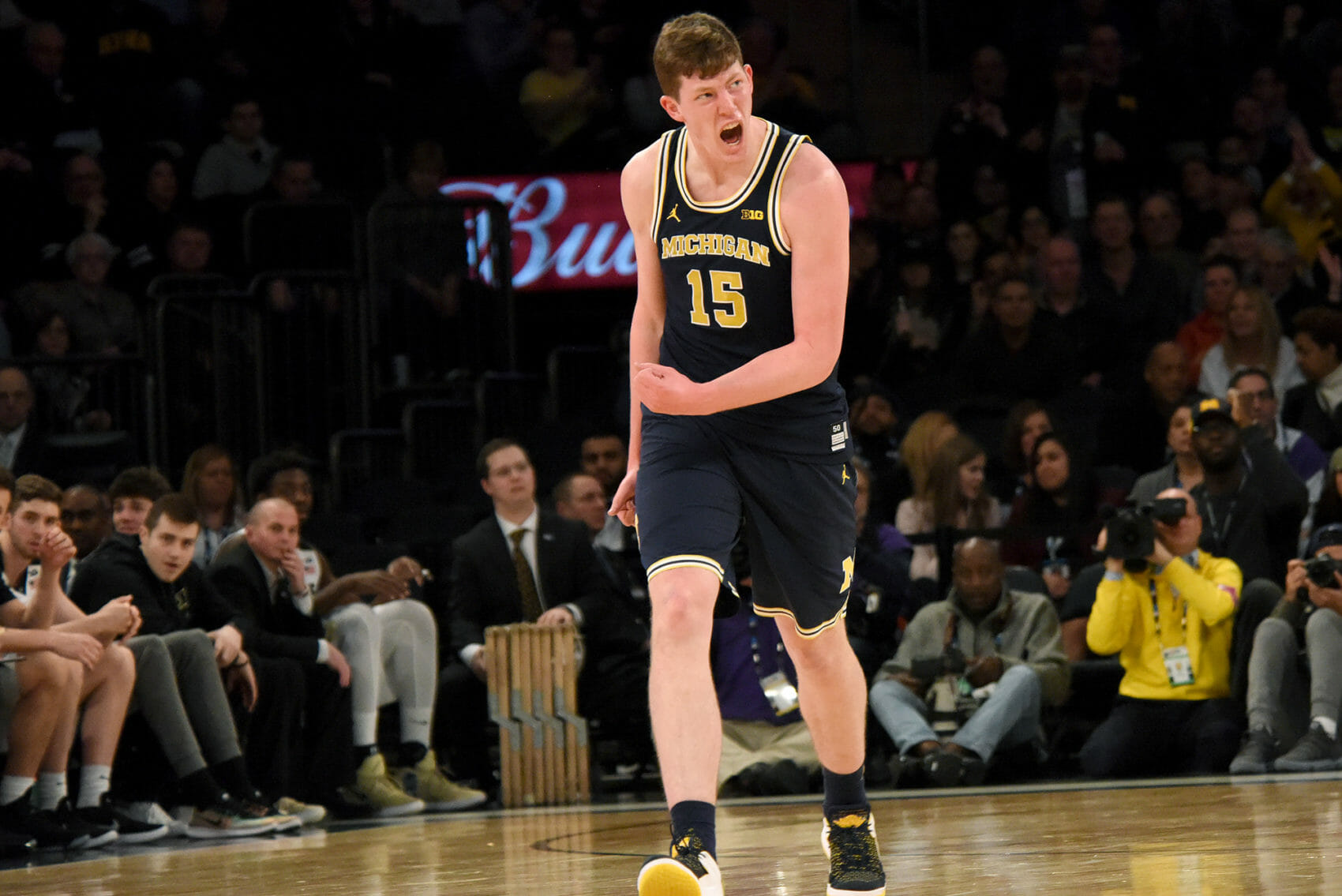 Michigan is in the Sweet Sixteen for the fourth time in the last six years and will face the Texas A&M Aggies on Thursday night (7:37 p.m., TBS) in Los Angeles.  Here’s what the National media thinks of the Wolverines’ chances in the regional round.

Michigan is in the Sweet Sixteen for the fourth time in the last six years and will face the Texas A&M Aggies on Thursday night (7:37 p.m., TBS) in Los Angeles.  Here’s what the National media thinks of the Wolverines’ chances in the regional round.

KenPom likes the Wolverines in the Sweet 16 match up by a final score of 68-64 was the opening line in Las Vegas was Michigan by 3.

Defining quality: Adaptability. For years, Michigan received what might be termed bounded praise. The Wolverines, it was said, had an undeniably great offense but these guys nevertheless couldn’t or perhaps even didn’t wish to really buckle down and play defense. That description no longer suits a team that has reached the Sweet 16 shooting 28 percent on its 3s. Michigan has had to win defensive slugfests against Montana and Houston to get here, and acknowledged offensive wizard Beilein has the best defense of his tenure in Ann Arbor.

Weakness: Shooting? Really? Well, in 2018, at least. Beilein has obviously had some incredibly accurate teams at Michigan, but the two-game perimeter dry spell mentioned above isn’t necessarily a shocking outlier. The Wolverines were good but not great in terms of knocking down shots from both sides of the arc in Big Ten play.

ESPN writes how Michigan got this far (defense) and what it will take to advance (offense):

How they’ve gotten this far
Defense and luck. Michigan is guarding better than any John Beilein team has, and the Wolverines have needed every bit of it in the first two rounds. They held Montana to just 0.71 points per possession, and then forced Houston’s Rob Gray to take 22 shots to get his 23 points. Of course, the Wolverines wouldn’t be here without Jordan Poole’s 30-footer at the buzzer to beat Houston by one.

What it’ll take for them to keep winning
Better offense. Michigan can’t win if it keeps scoring at the clip it did the first weekend. The Wolverines were held below one point per possession in both games, the first time since January they’ve done that in back-to-back games. In two games, they’ve gone 13-for-46 from 3-point range, and have struggled to get any flow on the offensive end. Moe Wagner, the team’s leading scorer, averaged 8.5 points on just 15 combined shots through two games.

What about Texas A&M? The Aggies might be able to make a run according to SB Nation.

There were injuries, suspensions, and ultimately the dismissal of freshman point guard J.J. Caldwell. Even after everyone was healthy and the off the court issues had been “cleared up,” Texas A&M looked like a team that wouldn’t last long in March. They finished 9-9 in the SEC, lost their conference tournament opener at the buzzer to Alabama, and were an underdog in their first round game against Providence despite being the better seed.

Saying that things “just clicked” for A&M in Charlotte this weekend doesn’t come close to explaining what the Aggies were able to do, but you’re probably still going to hear it a lot this week. Billy Kennedy’s team smothered Providence on Friday and then absolutely boat-raced North Carolina in front of a mostly pro-Tar Heel crowd on Sunday.

If they can somehow bottle up those efforts and duplicate some form of them against Michigan, there’s no reason to think the Aggies won’t continue to advance.

Mike DeCourcy says Michigan is the No. 4 team left int he NCAA Tournament.

Why it’s headed to the Final Four: The Wolverines have become a team that can survive on defense until it can manufacture the right offensive approach for the moment. Few teams in the field have a defender who makes sense in the matchup against Moe Wagner.

Why it’ll go home: Teams that can slow the pace and put Michigan in a grinding, constricted game can limit Wagner’s effectiveness and put pressure on the perimeter players who cause them discomfort.

Jordan Poole saved Michigan’s season with a buzzer-beater that shocked a Houston team that had played the better game for 39 minutes, 56.4 seconds Saturday. The Wolverines now advance to the Sweet 16 after defeating Houston in a thriller and Montana via a double-digit victory — the Grizzlies scored 47 points — in the opening round.

Moritz Wagner recovered from a 2-for-6 shooting effort (5 points) against Montana to register 12 points (5-for-9 shooting), 7 rebounds, 3 assists and 1 block in the win over Houston. Yet, the Wolverines squeezed by a dangerous 6-seed on a buzzer-beater, and its best player struggled against a Big Sky champion. It’s not close to the dominant efforts from higher seeds on this list, but it’s also short of Michigan’s potential.

Here are Five Thirty Eight’s updated odds for Michigan to advance, which give Michigan a 26% chance of making the Final Four. 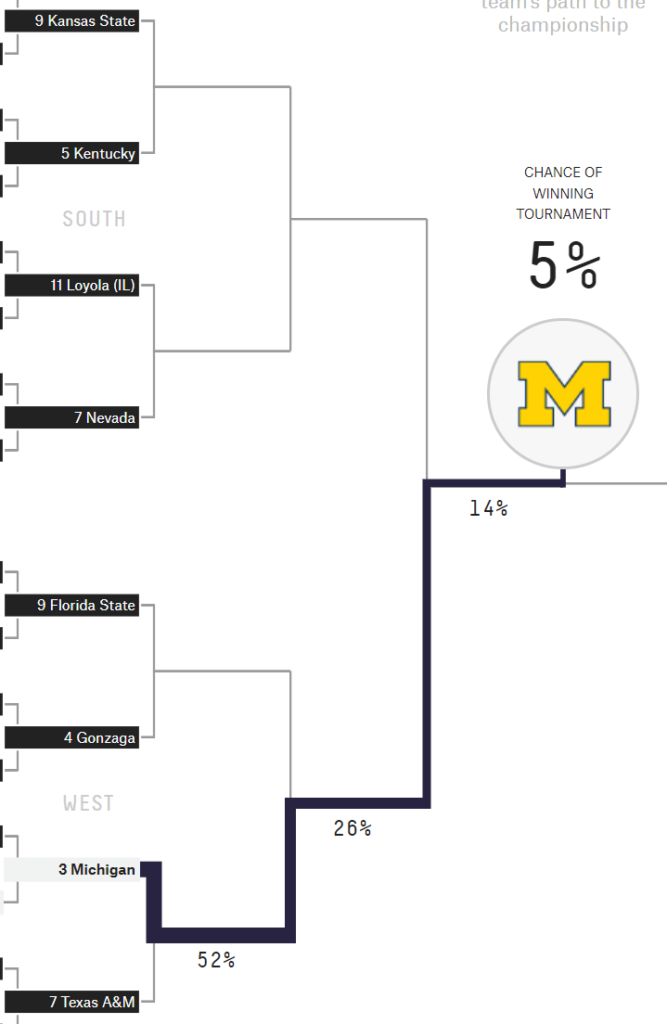 KenPom’s updated probabilities give the Wolverines a 32.7% shot at advancing to San Antonio. 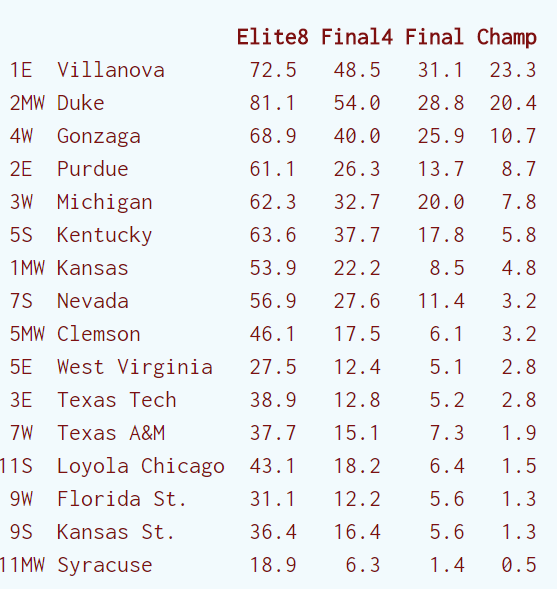 CBS says Jordan Poole’s shot is the third-best moment of March this year.

3. Jordan Poole shoots, splays, splashes — and dashes. Houston had no business losing its second-round game. But thanks to a solidly drawn-up play, and a little bit of luck, we have an immediately memorable buzzer-beater. The only one of the tournament so far!

I also love how Poole is running around on the floor after beating Houston at the buzzer … kind of how Jim Valvano did in 1983 after NC State knocked off the Cougars. The difference here is Poole wasn’t looking for someone to hug — he was dodging the embrace.