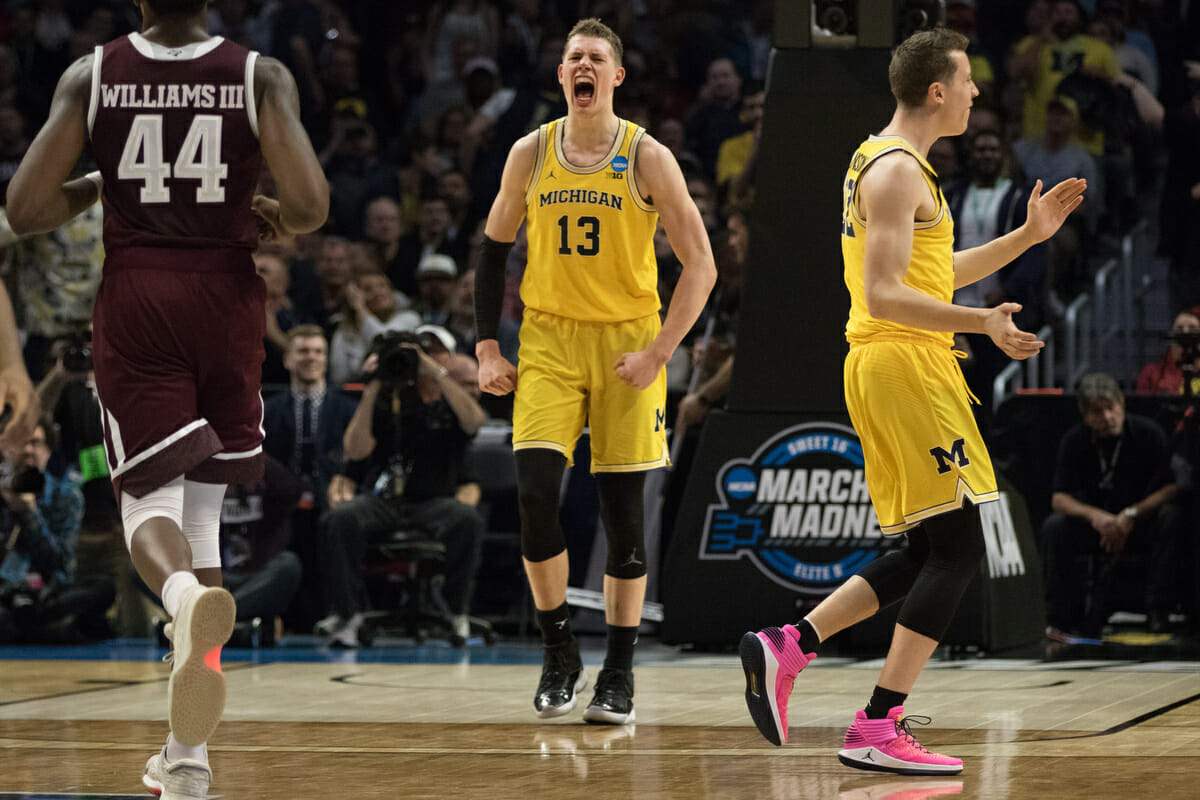 Michigan dominated Texas A&M from the opening tip to advance to the Elite Eight.

It only took four minutes for one thing to become obvious to everyone at the Staples Center on Thursday night: Texas A&M couldn’t guard Michigan.

The Wolverines spent the first 20 minutes of Thursday’s Sweet 16 game carving up the Aggie defense with ruthless precision.

The Aggies tried to switch every ball screen. Michigan guards shot over their bigs and Moritz Wagner scored over their guards. Texas A&M tried to bust out its 2-3 zone defense. Michigan scored in the middle of it or over the top of it.

On the other end of the floor, Michigan point guard Zavier Simpson played one-man wrecking crew to destroy the Aggie offense at the point of attack and trigger a transition attack that left A&M without any answers.

The Wolverines led by as many as 29 points in the first half and by 24 points at the halftime horn. They showed no signs of slowing down and capped the game off with an Austin Davis alley-oop dunk and a CJ Baird 3-pointer from 25-feet.

After two wins in Wichita that felt like pulling teeth, Michigan’s Sweet 16 victory was an outright celebration. 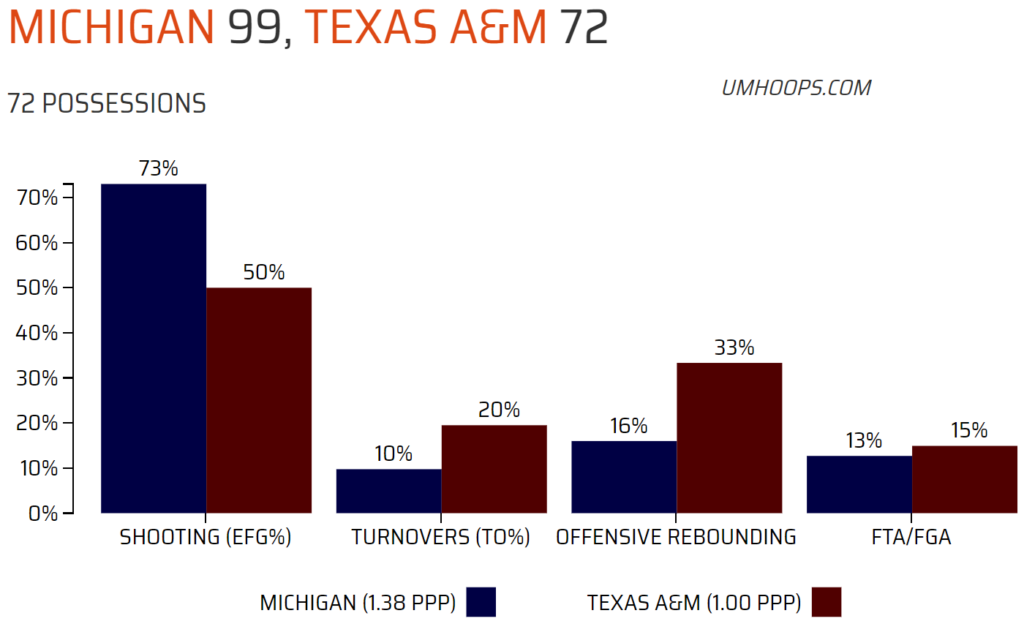 Michigan played its best offensive game of the season (against a Division I opponent) on the biggest stage. The Wolverines scored 1.38 points per possession in a performance that was almost flawless. Michigan made 14-of-24 3-pointers and shot 64% inside the arc for a ridiculous 73% effective field goal percentage. The Wolverines didn’t turn the ball over (just 10% of possessions) and really cracked the game wide open with their ability to push the ball in transition for easy baskets and corner threes.

This wasn’t anything different than what Michigan has done all year, it was just the best that the Wolverines have executed. Teams that play two traditional big men just have no hope of defending the Wolverines without throwing out everything they normally do.

Three months ago, this was a team that looked like it had no idea what to do against a switch-everything ball screen defense. The ball would stick and isolation plays would come up empty. Now the ball moves with confidence and the Wolverines attack mismatches, but manage to do so in the context of the whole team. Yes, everything looks better when the shots fall, but this was clinical execution and some of the best ball movement that we’ve seen from the Wolverines all season.

Michigan’s defensive performance in the first half set the tone. The Wolverines were locked in defensive and contesting every shot at the basket, helping on every ball screen (Michigan’s backside help against the pick and roll was fantastic) and forcing turnovers on 20% of Texas A&M’s offensive possessions. Michigan’s ability to rack up deflections and steals (12 live ball steals for the game) completely took the Aggies out of their comfort zone and allowed the Wolverines to control the game.

The A&M bigs got their points 35 points on 17-of-25 shooting, but Michigan managed to hold its own on the defensive glass and the majority of that production came when the game was out of hand late in the second half.

At this point, it is hard to say where the show stops for Michigan. The Wolverines are a win away from the Final Four and three wins away from winning the whole thing. They’ve won 12 games in a row and show no signs of slowing down. 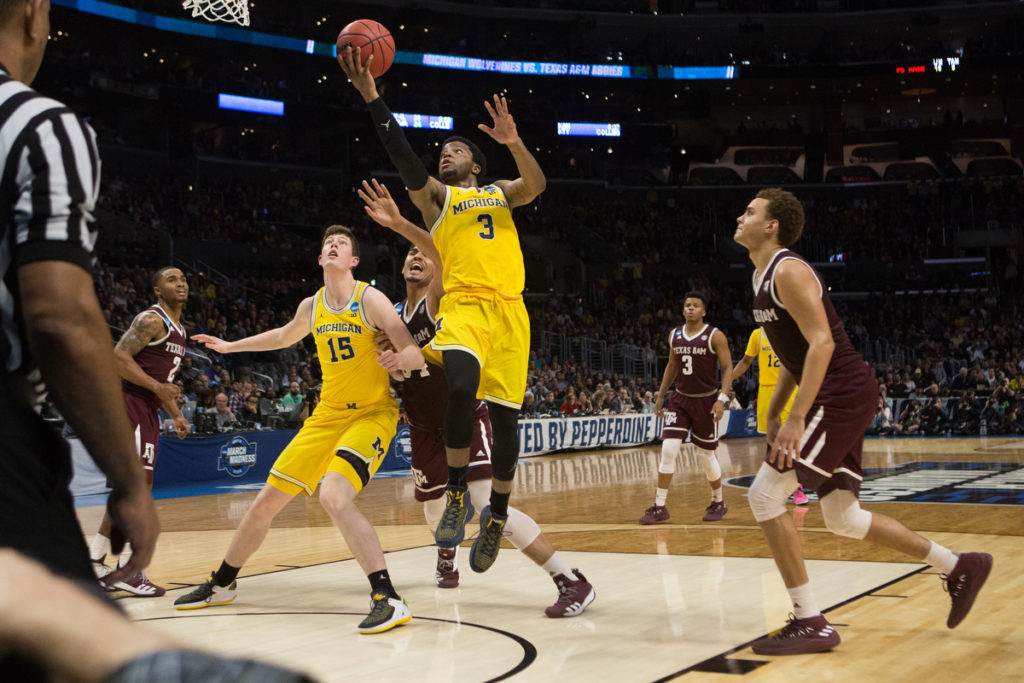 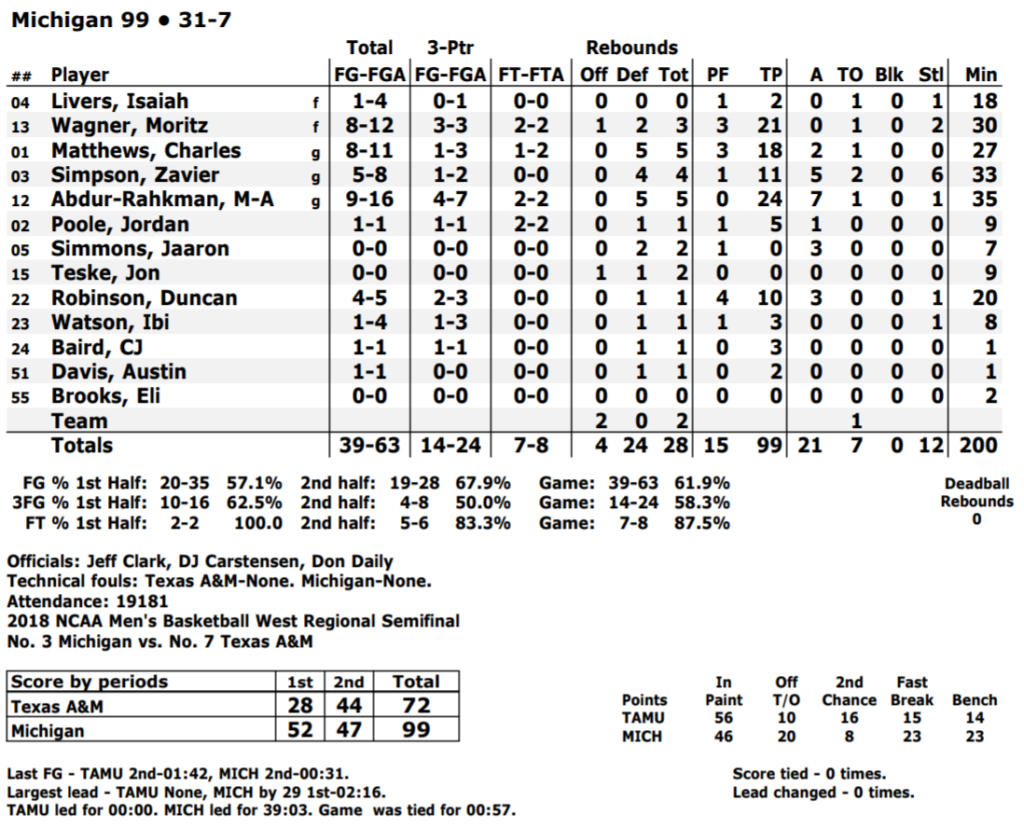