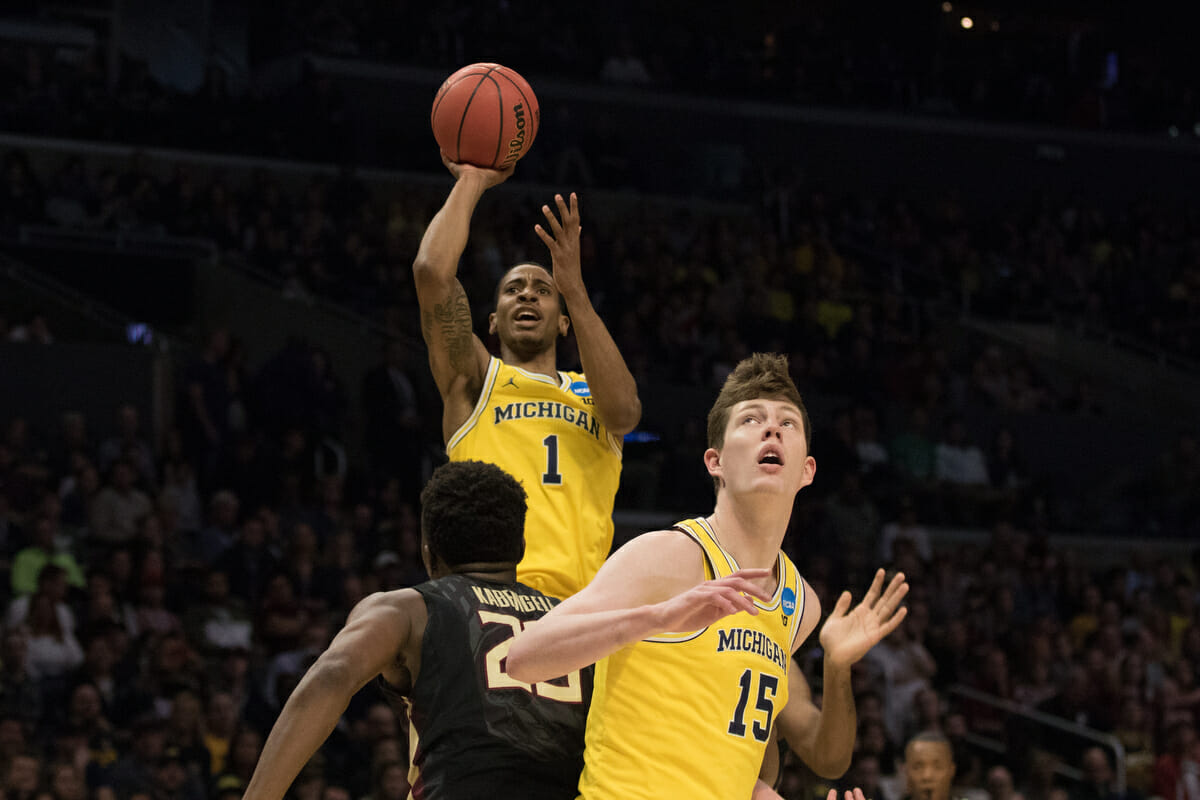 LOS ANGELES — Look for the literal embodiment of happiness and it’s all around you.

Michigan is scattered around the court at Staples Center — Jon Teske here, Saddi Washington there, Warde Manuel around the other way. They all wear the same expression, a joyful disbelief that bleeds into their bodily movement, walking around the place not entirely sure where to go, in some sort of daze because how could things possibly get better than this?

“We got a picture, I’ll come right back.”

Children are gathered, the picture is taken, the fight song is sung. Outside the locker room, the team keeps reporters waiting for an extra few minutes. Coach John Beilein’s shirt — drenched upon his arrival — is too wet to be presentable. He needs another.

Michigan has just sealed a Final Four bid with a 58-54 win over Florida State, another step toward a National Championship — the goal from Day One of this season, according to Zavier Simpson.

When the Wolverines forgot that goal, Charles Matthews reminded them.

In practice leading up to their first-round game against Montana, the team was ready to break a huddle. Matthews called them back.

Since then, Michigan hasn’t broken a huddle with anything else.

If that moment exemplifies Matthews’ growth off the court, Saturday’s game tells you everything about his growth on it.

As the Wolverines struggled through the first half, Matthews dropped 10 points along with a block and a steal. He threw down his first points of the night over Braian Angola with two hands and authority, and never slowed down. A transition lob a few minutes later, an and-one floater, somehow, a halftime lead.

When the game seemed to be slipping away from Michigan with just under four minutes to go — its lead cut to three — Matthews uncorked a drive, then stopped dead in his tracks. It seemed a repeat of every negative play he’s made all year. Instead of hesitating this time though, Matthews pivoted and released a turnaround jumper that went straight through.

“That was the biggest shot,” Yaklich said.

Three minutes and 51 long seconds later, the buzzer sounded and, somewhere amidst that sea of joy, Matthews was handed the West Region’s Most Outstanding Player Award after scoring 17 points on 6-of-14 shooting with eight rebounds, two blocks and a steal. He deserved nothing less.

Just over a month ago, Matthews put up a goose egg in the scoring column at Penn State in just 17 minutes, the kicker to a season that seemed to have gotten more frustrating for him the longer it went.

Since then, Matthews has found himself.

“He was kind of trying to figure out how to score and ‘How do I play?’ early on in the year,” Yaklich said. “Then he started to play really well, was averaging 20 a game, then he went into a lull, and then he really bought into coach Beilein’s individual (workouts), ‘You gotta do this if you wanna get better,’ and then he just slowly started getting back into Charles form. And you’re seeing this now, full-fledge.”

It looks like Braian Angola’s face on a poster. It looks like a catch-and-shoot 3-pointer, taken with confidence, that finds nylon, extending Michigan’s lead to four early in the second half. It looks like a drive that seems too patient, but isn’t, bringing the lead up to six. It looks like the biggest shot of the night, helping send the Wolverines to the Final Four.

And that growth, translated to the team? It looks like a group that had no business getting this far getting a step farther. Let Duncan Robinson explain.

“Quite honestly, when you look at it, it’s a buncha guys that probably shouldn’t be here or weren’t wanted here and, you know, whatever,” he said. “A guy like Moe (Wagner), hardly recruited; Muhammad(-Ali Abdur-Rahkman), two-star whatever; everyone wanted X to be done at Michigan; myself, I had to beg for a freakin’ scholarship. Didn’t get one out of high school. Charles, in the SEC, Kentucky, he didn’t cut it. So it’s like, when you get these personalities and these guys who have kinda been overlooked, whatever, their whole careers and kinda come together and believe in something collectively, it’s pretty special.”

Early in the year, this team looked like it would be lucky to play a game in the NCAA Tournament. Even six weeks ago, it looked like a group that would be lucky win one. Michigan was stymied at Northwestern — the 86th-best team in the country, according to KenPom — scoring all of 52 points in a loss. The Wolverines haven’t lost since.

“It’s not like we walked in the locker room and we started yelling and screaming and tearing the paint off the walls and then changing everything,” Yaklich said. “We just went back to who we are and that’s coach B” ‘Here’s what we did wrong, we’re gonna get better at this.’ And the guys, they just keep grinding away at this thing and they believe in, in the whole concept of what coach Beilein’s daily improvement mantra is.”

Michigan didn’t play its best game on Saturday — or in the first round against the Grizzlies, or in the second against Houston. Six weeks ago, the Wolverines would have dropped all three games. Instead, they won. Now, Michigan finds itself in the Final Four, a win over Loyola-Chicago away from playing for a National Championship.

The Wolverines have swagger — you’ll hear a lot about it in the next week. But at heart, their ethos is simple: daily improvement, a locker room without cliques, growth turning into victories.

“It’s just a (cumulative) effect of everything you put in there, it grows and pales over time and it’s impossible to, you know, say that one moment or one day in time doesn’t mean everything, cause that’s what we treat it like,” Robinson said. “We put everything we got into it.”

Now, Michigan is two wins away from getting everything out of it.