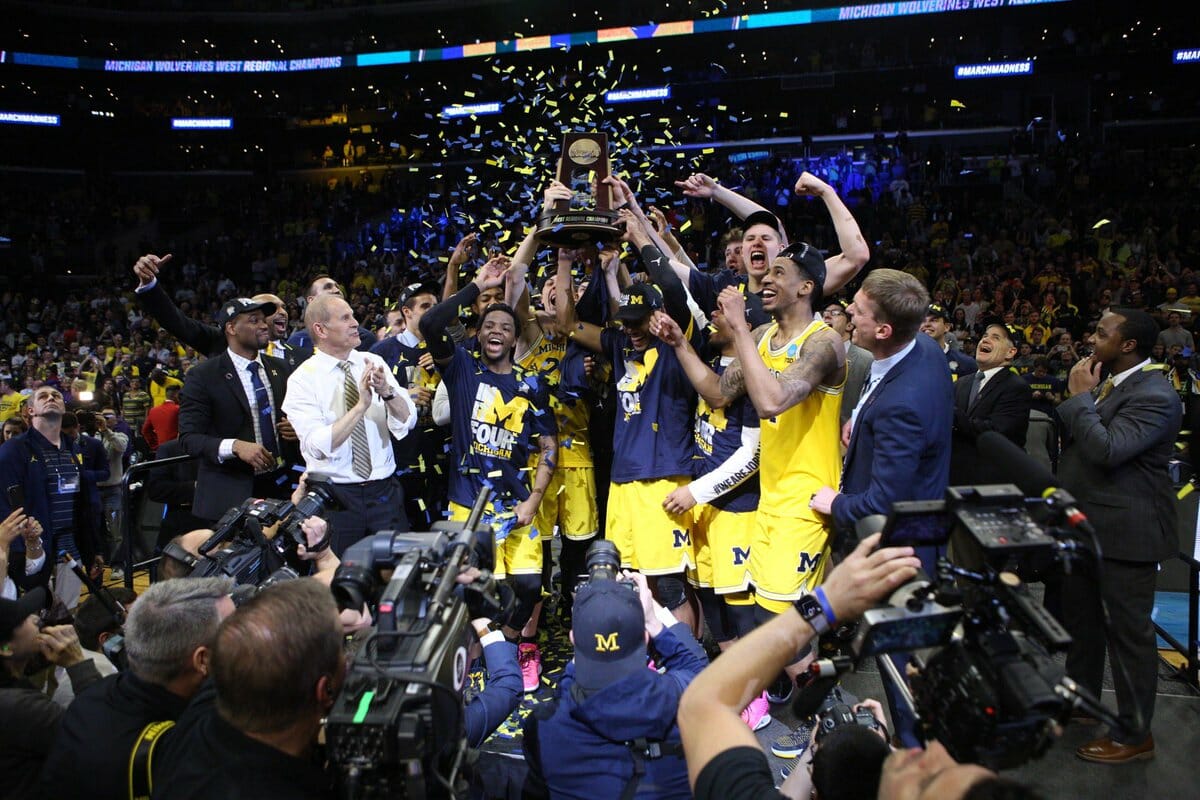 Michigan is going to the Final Four thanks to its defense.

Michigan played its second worst offensive game of the season on Saturday night and it was still enough to punch a ticket to the Final Four. That’s because the Wolverines held Florida State to their worst offensive performance of the year at just .84 points per possession.

This Michigan team defends. It defends better than any other college basketball team still playing.

After spending months taking a wait and see approach in evaluating Michigan’s improved defense, there’s no more denying it. This is a special defensive group that is only getting better. 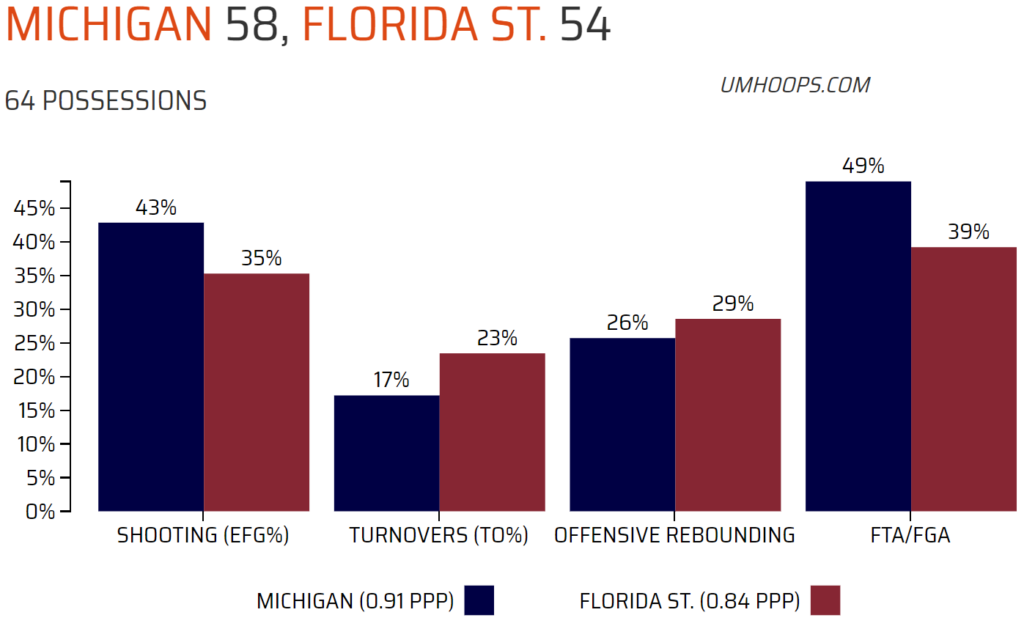 This was a masterpiece in tempo control by Michigan. The Wolverines held the game to just 64 possessions which marks the second slowest game that Florida State played all season. The Seminoles finished the game with more shot clock violations than fast break points (0) and Michigan managed to score 12 fast break points of its own.

Michigan’s defense was dominant from the opening tip. It felt like there were more highlight defensive possessions in this single game than in entire seasons during Beilein’s early years.The Wolverines forced shot clock violations and contested every jumper. Zavier Simpson ripped the ball from driving guards and Charles Matthews blocked shots above the rim.

48 hours after Florida State seemed to punk Gonzaga with its length and athleticism, Michigan flipped the script.

The Wolverines set the tone in the first half with their ball pressure and ability to rack up deflections. Florida State turned the ball over 14 times in the opening 20 minutes and Zavier Simpson was in the middle of what seemed like every giveaway. The Seminoles made their first shot of the second half, but then Michigan put together a streak of 7 straight stops (and 10 missed shots) that powered a 11-0 run.

Florida State finished the game with 15 turnovers and just 16 made baskets. Michigan held the Seminoles to a 35% effective field goal percentage, forced turnovers on almost nearly one out of every four possessions, and rebounded 71% of FSU’s missed shots. The Noles made just 12-of-34 shots inside the arc.

It was a defensive clinic. The crowning moment for Luke Yaklich’s defense and one that left the Seminoles without any answers.

The biggest strategic twist came midway through the second half when Leonard Hamilton shifted his starting four-man, Phil Cofer, to the five. That decision to go all in to small ball triggered a run — Cofer was more effective slipping to the rim — and forced Michigan to adjust. It was a move that maybe Florida State should have gone to earlier, but the Wolverines did just enough to adjust their ball screen defense and close out the game.

The other end of the court was a constant struggle. Florida State switched every ball screen and took Michigan out of its base offense. The Wolverines only scored .91 points per possession while shooting just 4-of-22 from 3-point range. Many of the looks were clean, but they just didn’t fall. Maybe it was Florida State’s length, maybe it was tired legs or just a bad day.

Florida State’s pressure on the ball bothered Michigan, but in the end it was also its undoing. The pressure left driving lanes and gaps to the basket and the Wolverines consistently drove the ball. Michigan made 15-of-27 2-pointers (56%) and got to the free throw line 24 times (making 16). Only four teams shot a higher percentage inside the arc against the Noles this season. It was the ability to get to the free throw line that carried Michigan to a first half lead after the offense flat lined for most of the first half.

Michigan will face Loyola on Saturday night in San Antonio, a game against the only team with a longer active winning streak than the Wolverines. There’s only one more net left to cut down and the Wolverines are only two wins away. 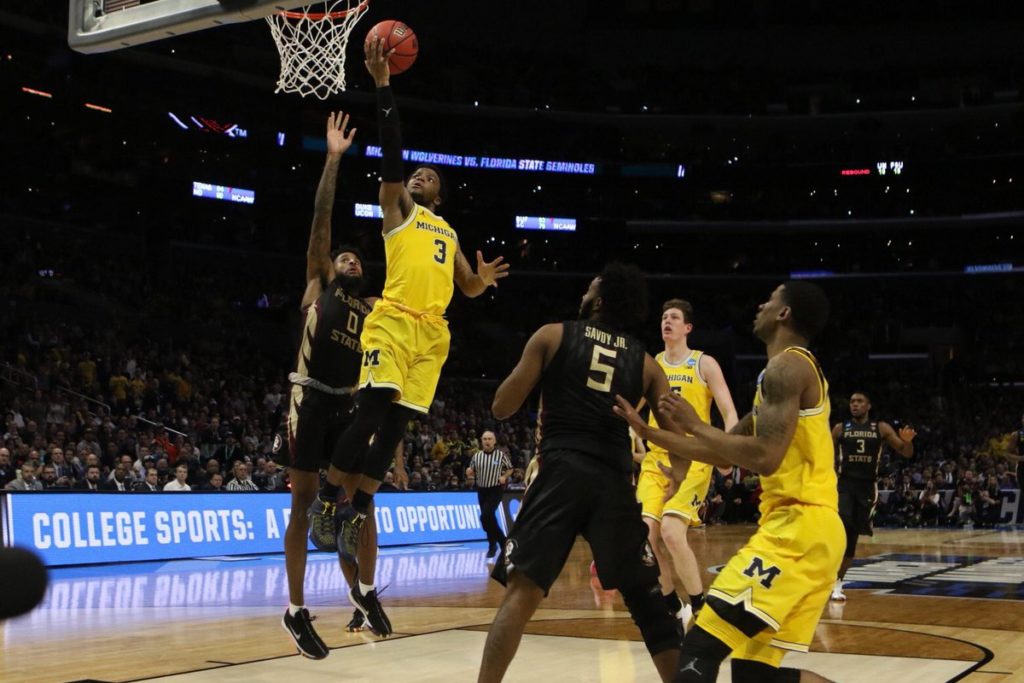