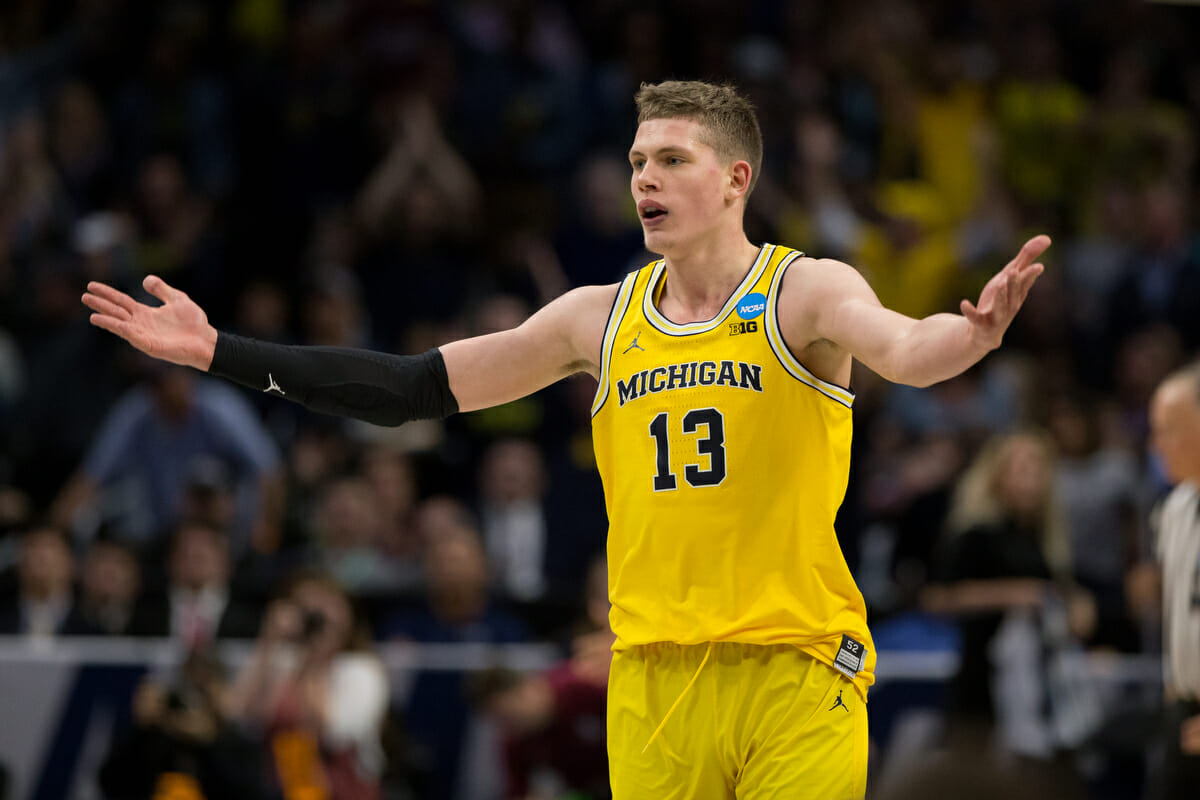 Michigan is in the Final Four and will face Loyola on Saturday night (6:09 p.m., ET TBS) in San Antonio.  Here’s what the National media thinks of the Wolverines’ chances in the final weekend of the season.

Michigan is in the Final Four and will face Loyola on Saturday night (6:09 p.m., ET TBS) in San Antonio.  Here’s what the National media thinks of the Wolverines’ chances in the final weekend of the season.

KenPom likes the Wolverines to advance to Monday by a final score of 65-60 was the opening line in Las Vegas was Michigan by 5.

Why they might win it: The Wolverines came within a few points, a defensive rebound or two and one really tough foul call – OK, it wasn’t tough, it was flat wrong – of defeating Louisville in the 2013 championship game. That was with the No. 37 defense in college basketball. Now, the Wolverines are No. 3 in that department. We saw the impact of that defense in eliciting 15 turnovers from Florida State and holding the Seminoles to 31.4 percent shooting in the West Region final. The improvement of that defense, with Zavier Simpson guarding the point of attack, has led to UM’s long winning streak. Over the past dozen games, the only teams to cross the 70-point mark against this group needed overtime (Iowa) and a whole lot of garbage time (Texas A&M in a 99-72 defeat) to get there.

Why they won’t: This is not a flawless offensive team. It still is rated only No. 31 in efficiency at KenPom.com, and that’s in part because its shooters tend to go cold at once. It was curious to see Wagner (.396) and PF Duncan Robinson (.392) go 1-of-11 from long distance against FSU. But it wasn’t anything new. UM was 8-of-30 against Houston in the second round, 5-of-16 against Montana in the first. The Wolverines made nearly everything against Texas A&M, but do we expect a reprise against the kind of competition they’ll encounter in San Antonio?

Michigan has 5/2 odds to win the National Championship.

ESPN says that the biggest reason that Michigan won’t win it all is because of its offense.

Why Michigan will leave San Antonio without a championship: Its inconsistent offense

Michigan’s defensive pressure has fueled its 13-game win streak. But every Michigan fan in the country is probably worried about the up-and-down offensive production of this defensive juggernaut. The same Michigan squad that connected on nearly 60 percent of its 3-point attempts in a win over Texas A&M in the Sweet 16 finished 4-for-22 from beyond the arc in Saturday’s victory against Florida State. The Wolverines rolled to a Big Ten championship with a potent offensive attack. In the NCAA tournament, however, Charles Matthews & Co. have averaged more than a point per possession in only one of their four games. They’ll need their best offensive output to compete with the hot shooters in San Antonio. A fluctuating offense, one that has failed to rise to its potential in the NCAA tournament, remains a concern.

4. Charles Matthews, Michigan Wolverines
Matthews is the highest-ranked player on this list to have fouled out of a game in this tournament. It happened against Houston, and the sophomore was limited to 11 points in a game the Wolverines very nearly lost. Conversely, when Matthews is available for the entire game, he’s averaging 18 points per outing and Michigan is winning without the last-second heroics of Jordan Poole.

8. Moritz Wagner, Michigan
Wagner was 0-of-7 from 3-point range in the regional final, but the 6-11 junior showed his true capability when he dropped 21 points on Texas A&M in just 30 minutes. Having a career 39 percent 3-point shooter as your 5-man complicates things for opposing defenses, even when that 5-man’s shots aren’t falling.

Luke Yaklich is featured by Yahoo!:

Understandably wary of hiring someone he didn’t know, Beilein sought to glean more information about Yaklich by speaking with his high school coach, several principals he previously worked for and members of the staff at Illinois State. Beilein also asked Yaklich to send video clips. of himself instructing Illinois State players during practices.

“I don’t care what you know if you can’t teach it,” Beilein told Yaklich. “I want to hear your voice. I want to know who you are as a teacher.”

Five Thirty Eight notes that Villanova had an easier path to the Final Four than Michigan:

Loyola’s adjusted offensive efficiency is merely the start of the story. Thanks to their prowess from behind the arc, the Ramblers rank fifth in effective field goal percentage, which gives greater weight to threes to account for the additional point. For the sake of comparison, Villanova ranks second in the country in effective field goal percentage, while Kansas is sixth. Michigan, which ranks 47th, is last among the Final Four teams.

How did Loyola get this far? Great scouting.

Some teams might have drowned in so much information, but Loyola put it to good use.

Moser said you can “rewind the clock to Utah with Rick Majerus” to find where his detailed reports come from. Before every game, at home or on the road, he and his staff “put everything up” for players to see.

“I don’t know if it’s through osmosis or anything,” Moser said, calling the reports just another way of picking up a competitive advantage. “… But this group embraces preparation.”