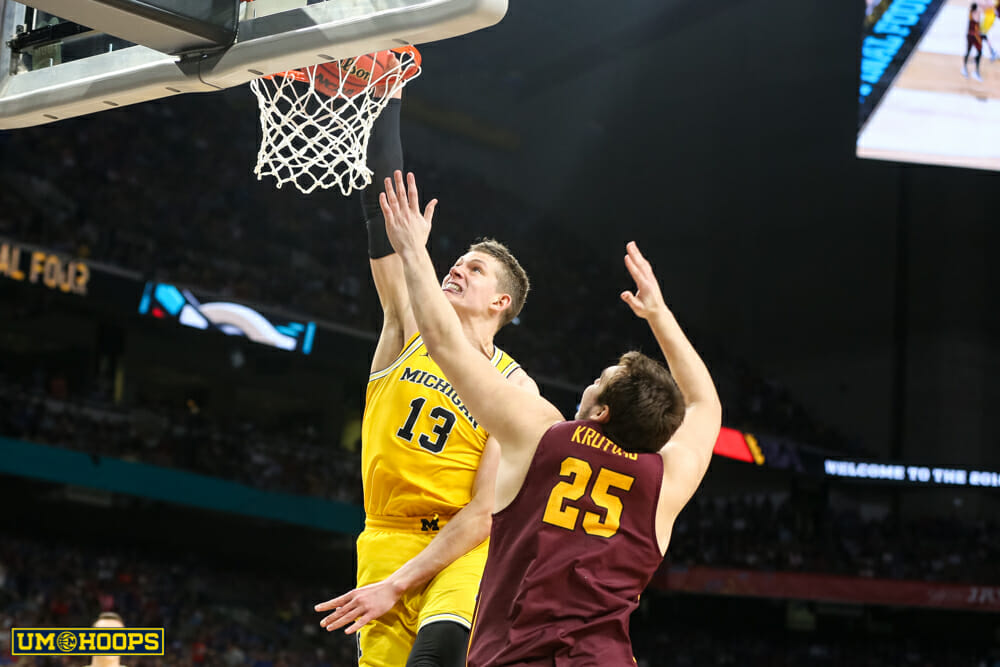 SAN ANTONIO — It’s unlike Moritz Wagner to stay anonymous on the court.

The junior forward isn’t just Michigan’s best player, he’s the Wolverines’ most consistent. Just about every game, all year, win or loss, featured a stalwart Wagner performance — double-digit scoring, a handful of rebounds, ho-hum. The only exception to that rule was the NCAA Tournament, at least until Saturday.

Wagner gave everything John Beilein has ever asked him to give in Michigan’s 69-57 win over Loyola. Then he gave a little bit more: 24 points on 10-of-16 shooting, 15 rebounds, three steals. On Saturday, Wagner played savior for a team that looked to be finished, down eight points with 11 minutes and no energy left.

Wagner carried Michigan for 30 minutes in a game that would have been far gone from them otherwise. Michigan’s offense stalled, then broke down in the first half against Loyola like an old car you failed to restore.

Except for Wagner. He attacked every switch — not just off the dribble, but on the boards — carousing his way to a double-double by halftime, attacking the offensive glass in a way he never has.

Not this year, not ever.

The Ramblers switched every ball-screen and went small, with Cameron Krutwig — their only traditional big man — riding the bench for the majority of the game. Wagner feasted, getting going early and never stopping.

“I got a couple easy ones early because they switched,” Wagner said, “and I was lucky enough to grab some offensive rebounds and finish them.”

Wagner’s previous career-high for a game in offensive rebounding was five, in December 2016 against Furman. He equaled that in the first half, then put up 11 points to boot — enough to keep the Ramblers from stepping on Michigan’s throat.

“Rebounding and him are not synonymous,” Michigan coach John Beilein said. “But we continue to see people switch screens and so one of the plans today was, ‘Moe, when they switch these, go down. We might not be able to get you the ball when they call the help. Just rebound it.’ And he did a great job.”

This is the first year Wagner has rebounded, but Saturday was the first game Wagner won with his rebounding.

“I’ve never seen Moe sit under the rim for a rebound,” Isaiah Livers said. “I haven’t seen him do that in a while, cause Moe, he likes to (take) 3-point shots … but he definitely played like an actual big man today.”

At halftime, Wagner, the loudest guy on the court, in practice and pretty much any room he walks into — having scored half of Michigan’s 22 points and grabbed 11 of their 21 rebounds —  sat quietly while Jordan Poole rallied the troops.

Everyone else knew they had to pick it up. Wagner just had to keep it going.

40 seconds into the second half, he did just that, uncorking a driving dunk to cut the Ramblers’ lead down to eight.

Eventually, everyone else picked it up. Two Duncan Robinson triples and a couple Jordan Poole drives later, it was Wagner’s turn again. He delivered, dropping a backpedaling, pull-up 3-pointer to tie it.

The only other two players ever with at least 20 points and 15 rebounds in a Final Four game are Larry Bird and Akeem Olajuwon. And neither of them hit that kind of shot.

Less than a minute later, Poole cut straight to the basket, found himself wide open and drew a foul. He hit both free throws to give Michigan its first lead since the score was 15-13.

The Wolverines never gave it up — and when the buzzer sounded to indicate that this team, somehow, will play for a national championship Monday night, Wagner lingered on the court to bask in the moment a couple minutes longer than the most of his teammates.

When he finally found his way down the tunnel, Wagner was stopped by athletic director Warde Manuel for a brief conversation. After the two exchanged words, Wagner flipped his towel into a sea of Michigan fans and ran off into the history books.