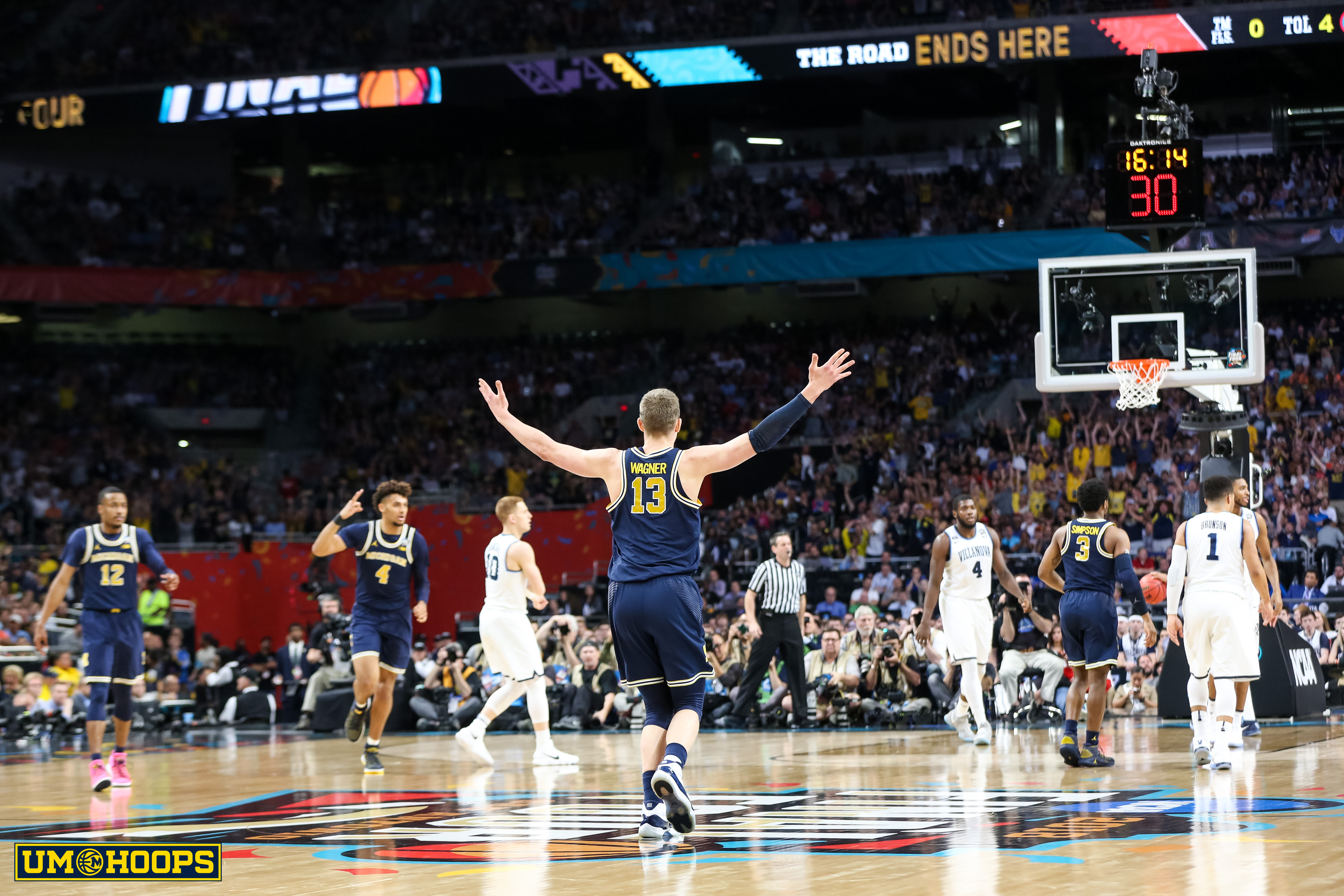 Moritz Wagner started the game with a drop-step layup, dancing around Omari Spellman. He scored again the next time down, then nailed a 3-pointer. He swaggered backwards, letting his hands out and beckoning the crowd to rain down noise. By the first timeout, Wagner already had nine points, well on his way to a second straight historic performance.

Muhammad-Ali Abdur-Rahkman’s first shot of the night was an easy layup. He followed it with a 3-pointer minutes later. After a poor performance against Loyola two days prior, Abdur-Rahkman was changing the narrative at the best time possible.

Michigan was scoring — and scoring easily.

“I was super-confident,” Isaiah Livers said. “I (felt) like I could’ve made a half-court shot.”

And the whole time, Zavier Simpson was building a vacation home in Jalen Brunson’s shorts. After four early points, the Player of the Year missed every shot he took for the game’s next 18 minutes.

The Wolverines could — no, would — beat Villanova, on their way to a title.

“Those 10 minutes were great.” Isaiah Livers said. “We’re like, ‘Yes. Our basketball is back.’ We felt like we were gonna go in the half with a lead and we’re gonna be all — we’re gonna be good.

“The whole crowd was going crazy,” added C.J. Baird. “I mean the bench was excited. I think it gave us that belief we could do it — it was something we could do.”

The redshirt sophomore dropped six straight points as soon as he came off the bench, pulling the Wildcats within two. Then, he shot the lights out for the rest of the half. DiVincenzo nailed a pull-up triple for the lead with just over six minutes to go in the period, then hit another two minutes later, then finished an and-one layup over Abdur-Rahkman to boot.

Brunson punctuated the display by pulling up and dropping a triple over Simpson for his first points since the early goings. That extended Villanova’s lead to nine with just under a minute to go in the half.

And just like that, Michigan had gone from the top of the basketball world to shell-shocked.

The Wolverines were down just nine points at the half, but their best chance had come and gone.

The Wildcats spent the second half pulling away, cruising to a 79-62 victory and the national title. Every time Michigan managed to crack the door open, Villanova slammed it back shut.

When a Charles Matthews transition layup cut the Wildcats’ lead to a manageable 12 with nine minutes left, there was DiVincenzo again.

He pulled up for an in-your-face, I’m-better-than-you-and-I-know-it 3-pointer and hit it. Then the next time down, he did it again. Then came the chants, raining DiVincenzo’s name down from the Alamodome’s rafters and writing Michigan’s epitaph.

“You maybe get a run or a couple stops and then all the sudden they hit one or they get a second-chance point,” Duncan Robinson said. “… Those are just momentum-killers.”

“It was (DiVincenzo’s) night,” added Livers. “You can’t take away someone when they have their night. You just gotta contest and just hope for a miss at that point.”

Minutes later, when Jordan Poole found himself with an open lane in transition and a chance to cut the lead to 12, he blew the layup. Mikal Bridges came down on the other end and put in a 3-pointer over him, keeping the game out of reach.

“We push down and we go down there and jack up a layup and miss it, they go down and bank a 3,” assistant coach DeAndre Haynes said. “ … We call those backbreakers.”

Wagner became a shell of himself, scoring just five second-half points and earning a technical foul as part of an altercation with Omari Spellman. All that aggressiveness that had been peppered throughout Saturday’s win — that had carried into the first minutes of Monday’s game — was suddenly gone.

Michigan was 3-of-23 from beyond the arc for the game and 1-of-10 in the second half. All tournament — all year — the Wolverines managed to win with defense, but in the wake of DiVincenzo’s out-of-body performance, that was no longer an option.

Michigan’s defensive rebounding — a point of pride all season — dried up like a well in the Sahara. For every miss the Wolverines forced, there seemed to be a Villanova jersey to put it back.

“They were more aggressive on the glass,” Baird said. “They kinda beat us to the ball. They were going for those 50-50 balls we couldn’t get.”

Before the game, John Beilein told the Wolverines they had proven everybody wrong before and could do it again. For 10 minutes, Michigan did just that, punching the best team in the country in the mouth and drawing blood.

For 10 minutes, Michigan had a title in its grasp. Over 40, it couldn’t hold on.